This week I started on the sticks of infantry and gun crews that I had prepped and primed last week. By this point I know how to cope with painting infantry figures. And for me that means splitting the task into smaller parts and handling each one in my own time.

However, my time this week was also taken up by having to spend a lot of time fixing my blog. Given the time it takes for photos to upload to Blogger, I had taken to uploading pictures to Facebook and linking the images into my blog. At some point in the last few weeks Facebook seems to have moved/changed the URL of some of my pictures. This meant I was left with somewhere between 50 and 100 blog entries with no pictures, including some of the most popular ones... However, hopefully this issue is now sorted - if anyone is seeing broken image links or images that won't display, please let me know!

So these infantry are all pre-wash/pre-varnish and just really have the base colours blocked in. They are a miss match of infantry, mortar and gun crews. This includes some simple greenstuff conversions - like my attempts to make the mortar bombs for the 4.2" mortar crew bigger and one officer that has been converted from a 8th Army model (and has some sort of popeye arm now).
Posted by James MacCraggs at 23:18:00 6 comments:

I had a chance to get along to the Carluke and Law Wargames Club this Saturday as A was working. Having organised with YD to play BG:O we had planned on a 300 point game. However we decided to ask through the week if anyone else wanted to play.

The answer was everyone.

It turns out that these rules have become the favorite WW2 system in the club, replacing the previous champion Rapid Fire. In reply to my text to YD about what points to play, the reply was 'bring everything'!

We set up a long table with the aim of playing up rather than across. The club has adopted the game with a couple of small modifications. Currently, they ignore the force BR and just play to a set BR level for each side. This worked pretty well for a pick up game, but talking to YD afterwards I felt that the method of BR tracking disadvantaged the Allies. But for pickup games it works fine. The other major modification is that instead of randomly drawing counters Big Stu had re-arranged the counters sheet into a random format, and you roll 1d8 for row and 1d12 for line. Pretty simple... but I think the rules have drawn counters removed from the pot so that there are a limited number of '1's and '5's.

Still, great game. Highlights were our (the allied) cunning plan that had us attacking in waves with each wave having a objective. Our infantry secured the start line and then the mobile forces came on...  Our Shermans coming on and bravely engaging the front armour of the Jagdpather - one shot pinging off into orbit causing the Jagdpather crew to roll a 1 for morale and be pinned!

Our 25-pounders had the crossroads pre-registered and we called down all 4 guns onto the crossroads behind the Jagdpanther - and the first ranging round scattered to within an inch of the big cat. I can imagine the FOO calling fire for effect before the dust had cleared! The result was one dead Big Cat.

Nebelwerfer fire raining down to pin and destroy, Pak40's lurking behind every hedge and nice models on the table. All good fun.

I'm having to undertake some maintenance to my blog currently as posts from Sept 2013 until recently have broken image links.

Apologies for this, it seems to be due to Facebook moving/changing the URL of the pictures involved. I am having to download the images from facebook and re-upload them to blogger to make sure they do not vanish again.

As you can imagine, trying to remember which picture goes where makes this all the more interesting. I am also enjoying how poor the lighting is in many of my pics!!!

As I continue plodding towards the aim of having everything on my painting chart green within the 6 months time frame.... I thought I should update my actual chart. 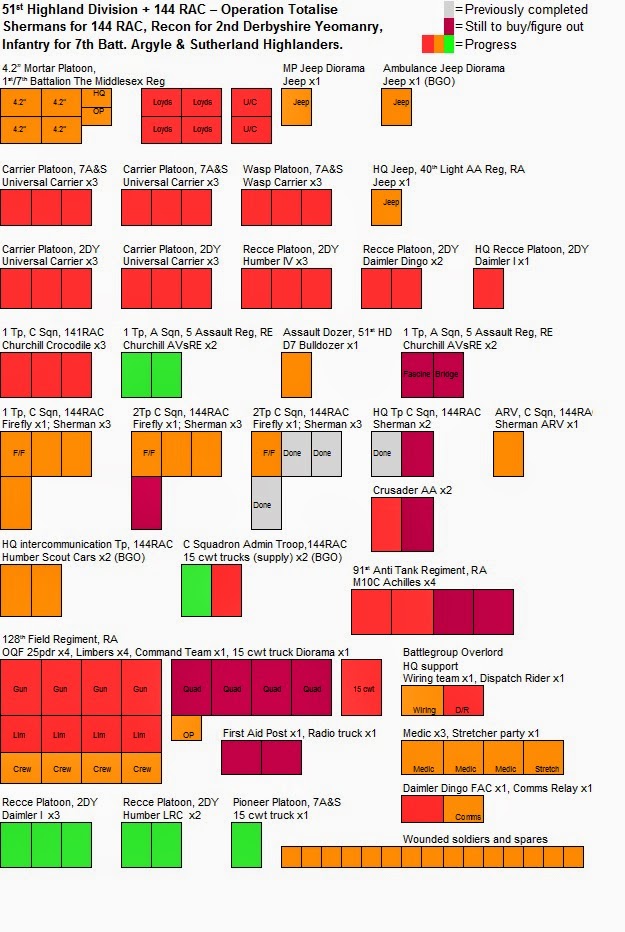 I've reached a bit of a dead end with the vehicles because of the weather, time and not being allowed to use varnish in the house any more (the injustice! - although I am working on being able to use the box room so my varnishing isn't stopped for the whole winter).

While I try to resolve the vanishing issue, I have now moved onto trying to clear my feet of the various infantry and crew figures I have.

Hence the updated chart with a bit more orange on it!

The last week was spent cleaning all these figures up, getting them prepped and now they are ready to go (although I'm not sure whether or not I am!!!). 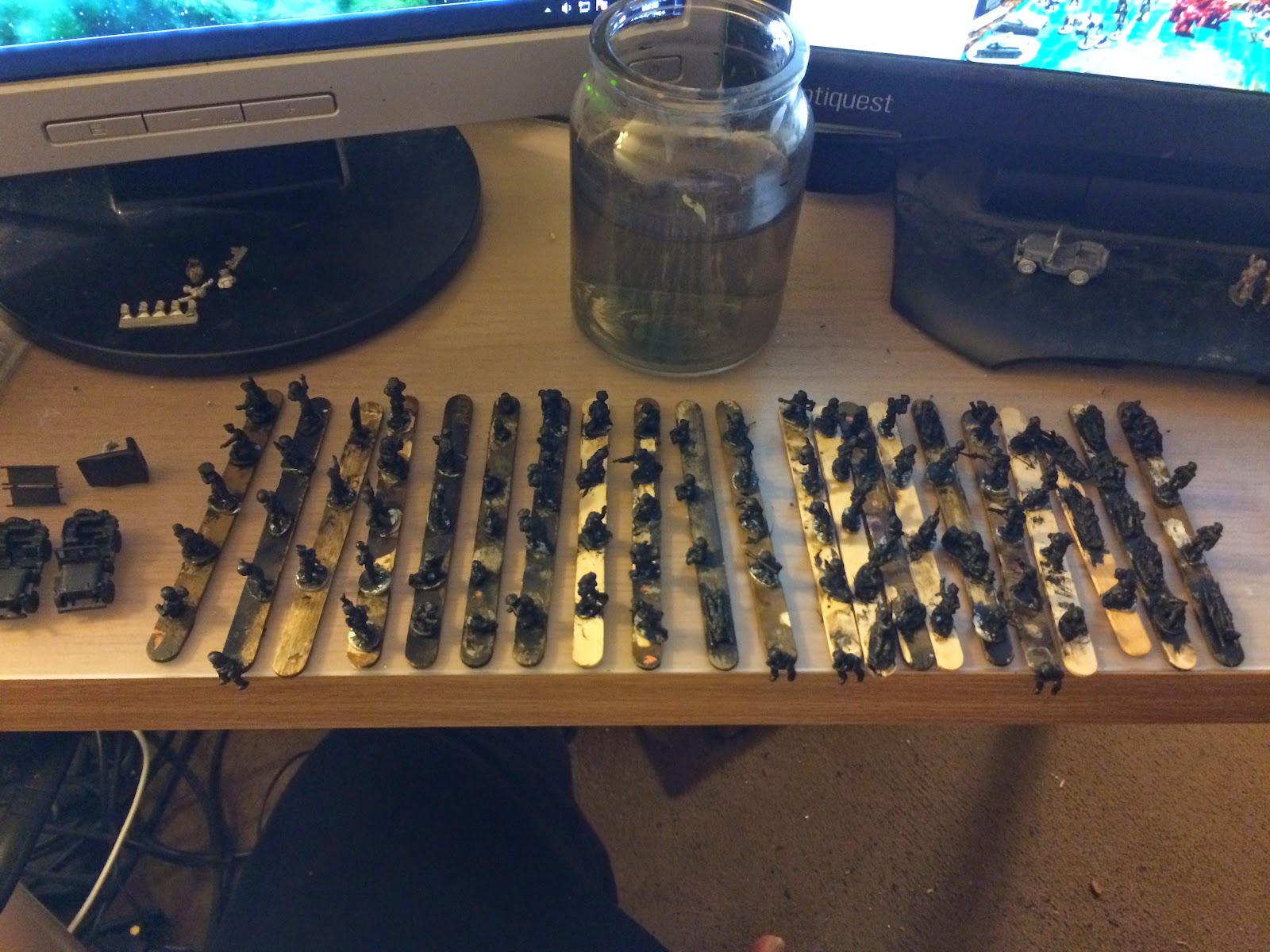 Plus the three jeeps I have been working on...

My thoughts this morning will be with the fallen of all wars, past and present. Specifically though I'll be thinking of the men of 144RAC. 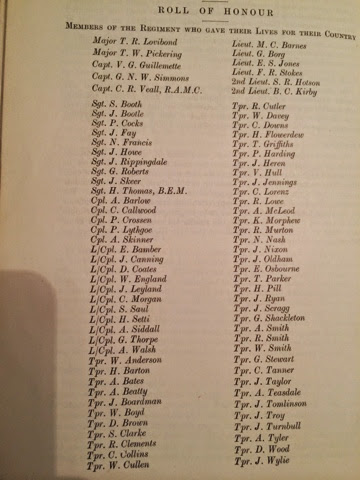 As the dedication on the first page of 'Blue Flash' states:

"To all who served in the Regiment

"I had rather have,
Such men my friends than enemies."

Part of my painting chart for the 6 Months Metal Mountain Reduction Painting Challenge is an ambulance jeep, for use with Battlegroup Overlord. And also because I thought it would be interesting to do as a project, and would fit in with the other wartime medical models I was planning on doing.

The original plan had been to use the stretcher models from the Skytrex medic's packs I had bought. However, having prepared one of them for the model I became concerned that it would make the model look a little too busy. So the other night I began 'constructing' this: 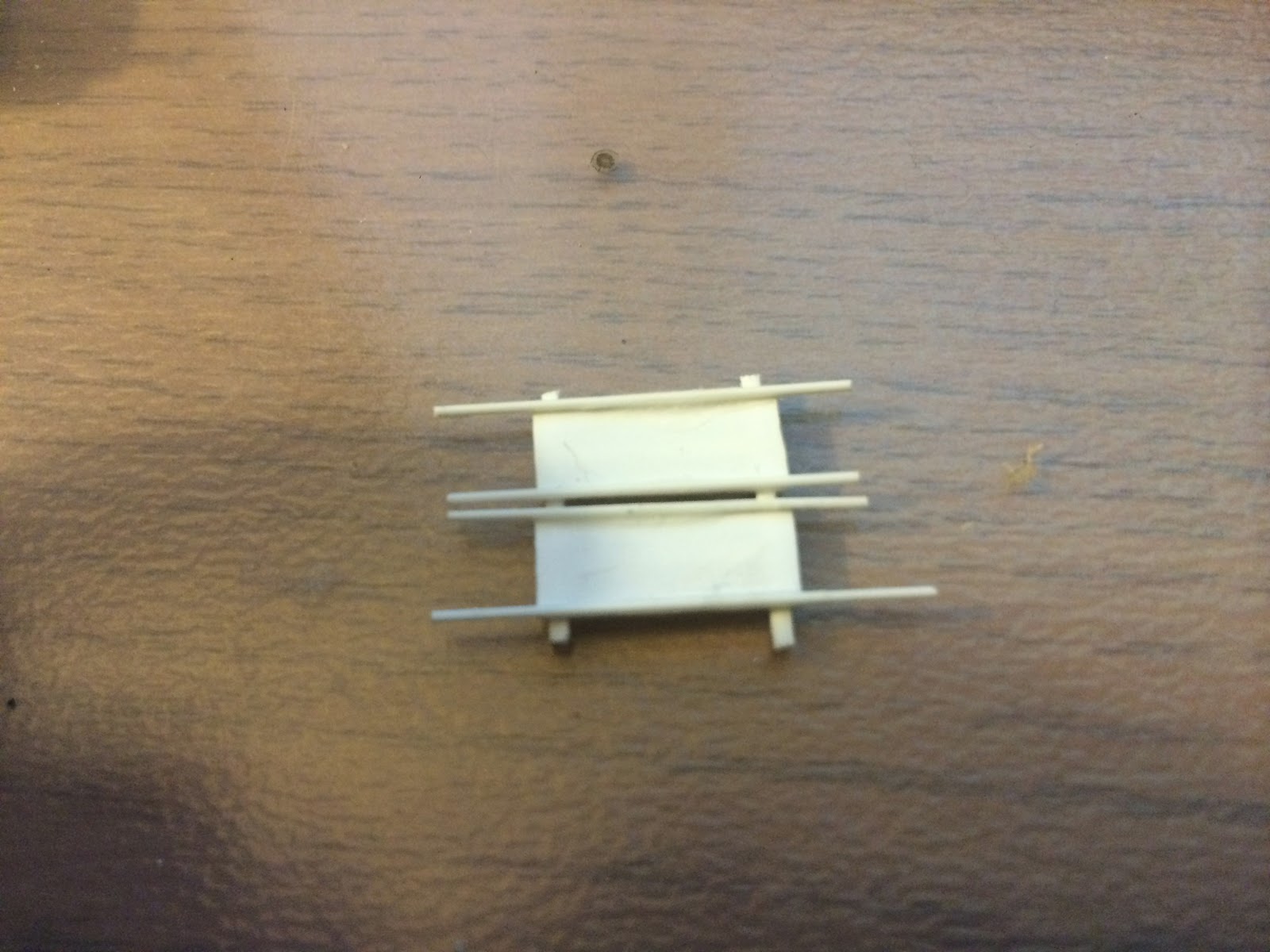 These were done using some of the styrene I had ordered via ebay a few months ago. The pack contained various lengths and thicknesses of styrene. Combined with some thin plasticard I had, I built two stretchers and then a framework for the hood of the Jeep.

The reason for the framework was that I realised that in order to paint the jeep and get the decals I want to put on in place, I would have to add the stretchers once the jeep was finished.

Obviously, the stretcher poles and supports still have to be trimmed!

The Jeep itself needed a couple of extras. I don't think I would be able to work with styrene thin enough to make the pole like supports. I should have mentioned I am using a 20mm model from Milicast as a guide (pic found here). However, I may give using the thinner stuff a try depending on how I feel once all the bits are done. 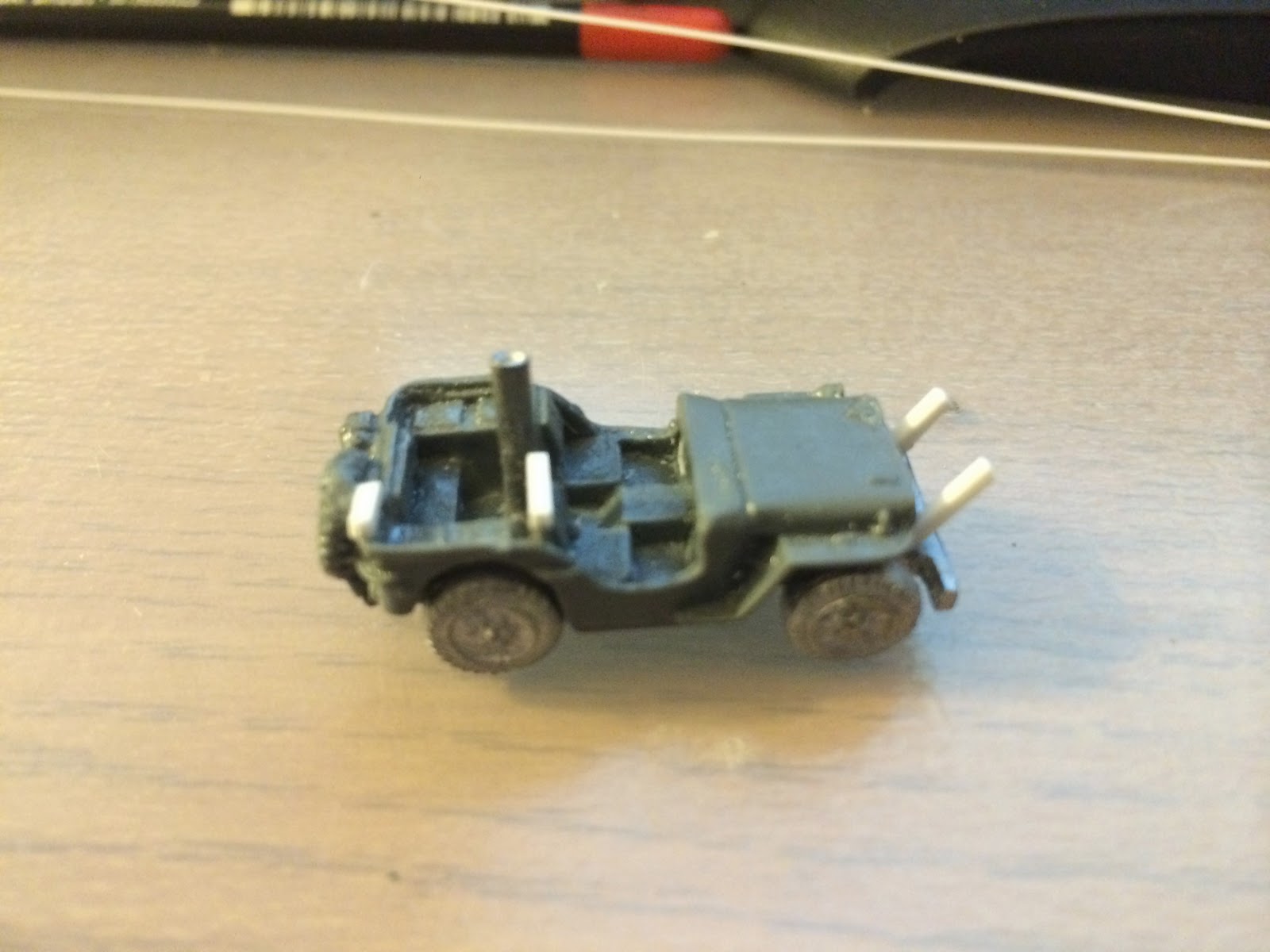 The supports at the front still need to be trimmed to the correct length to support the front of the stretchers. 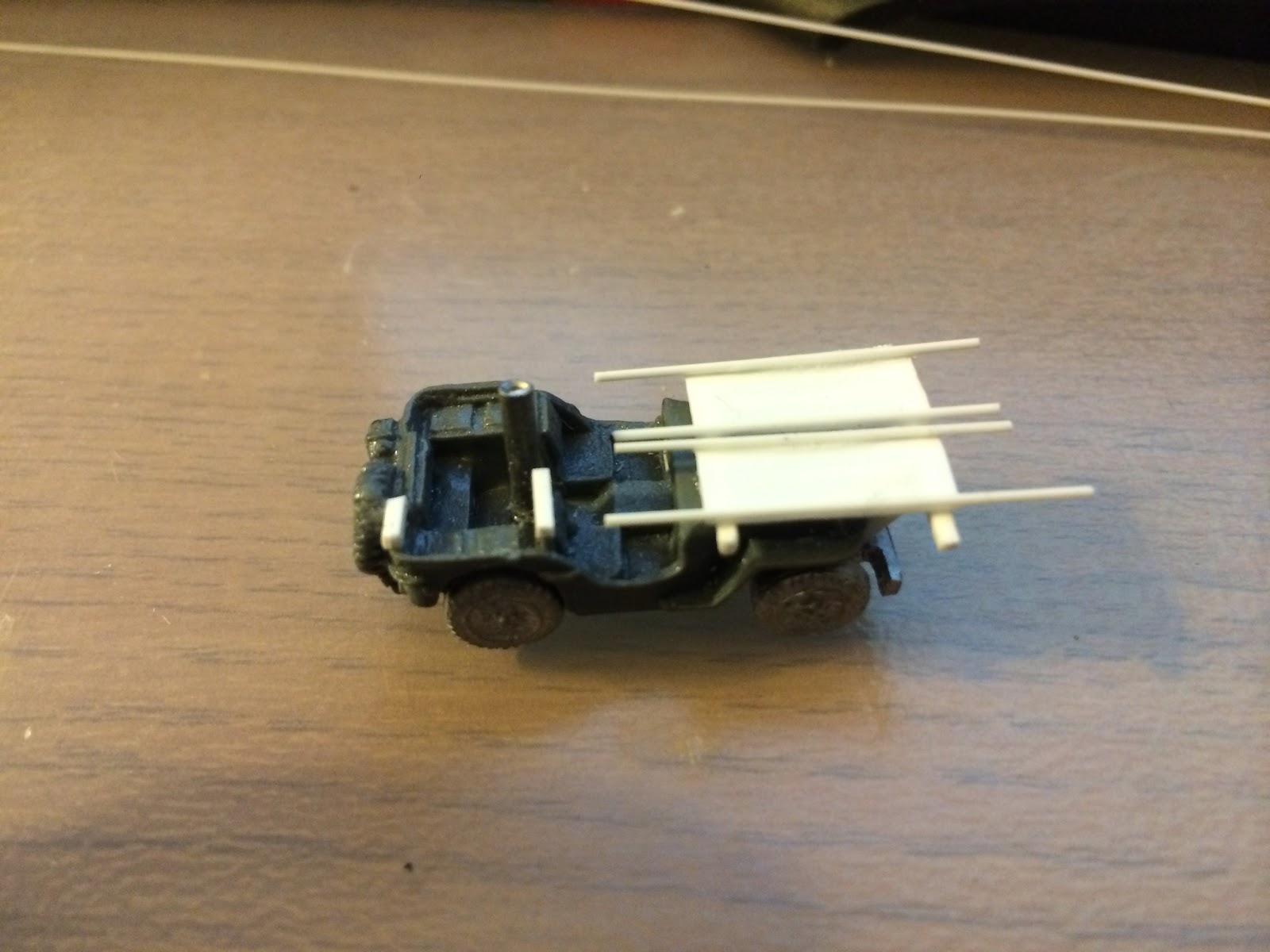 And a (very rough) assembly of all the bits: 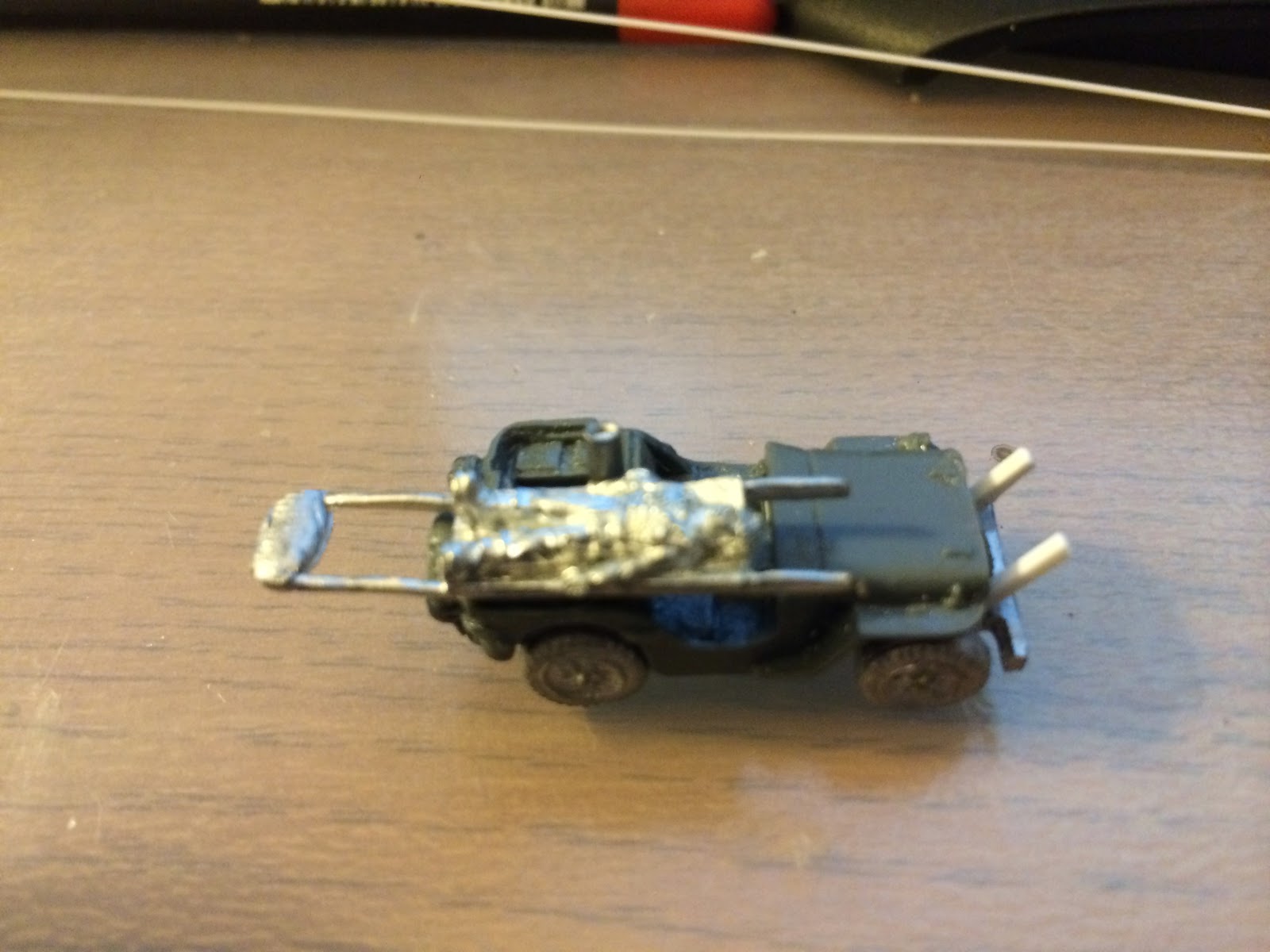 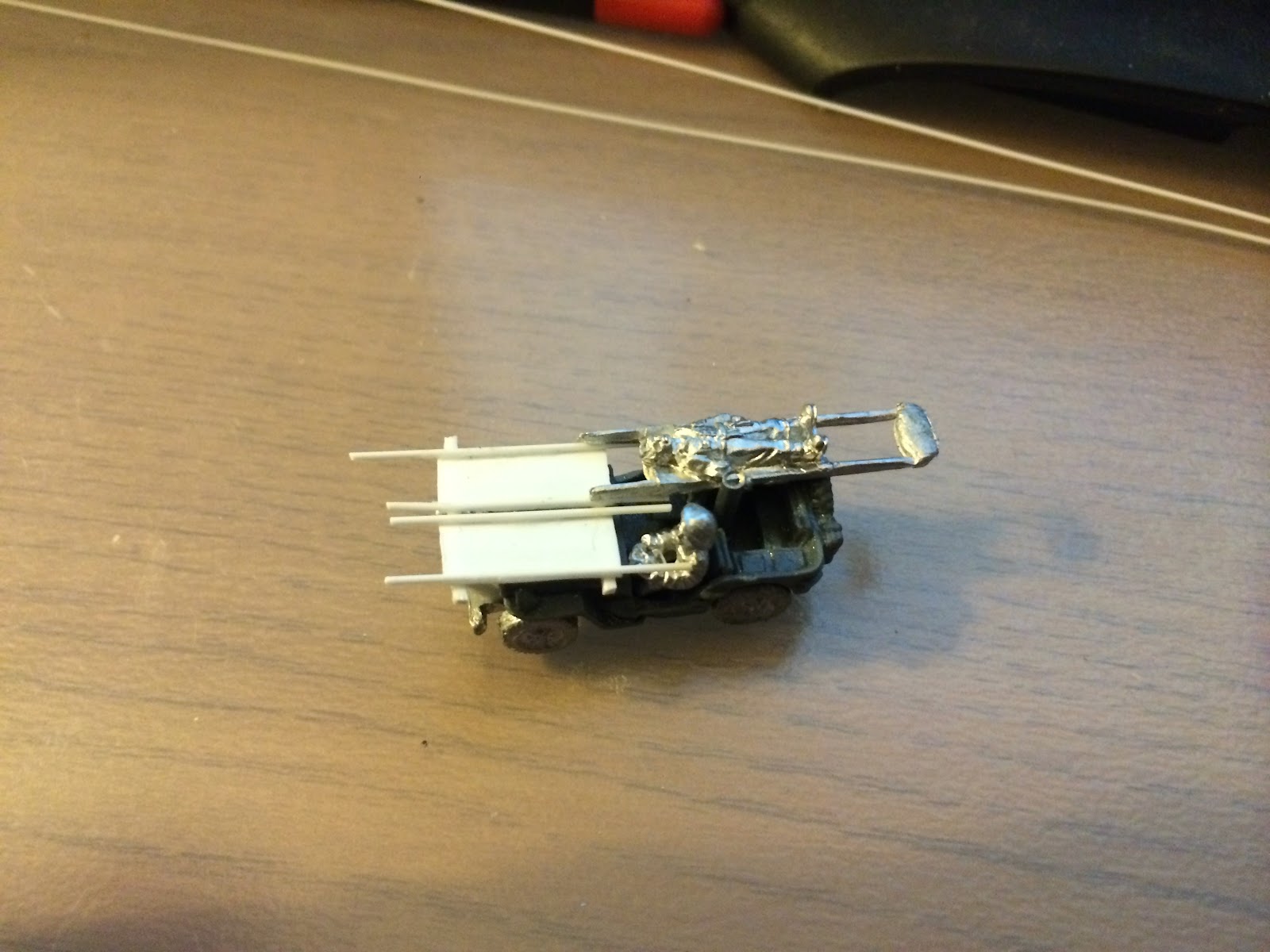 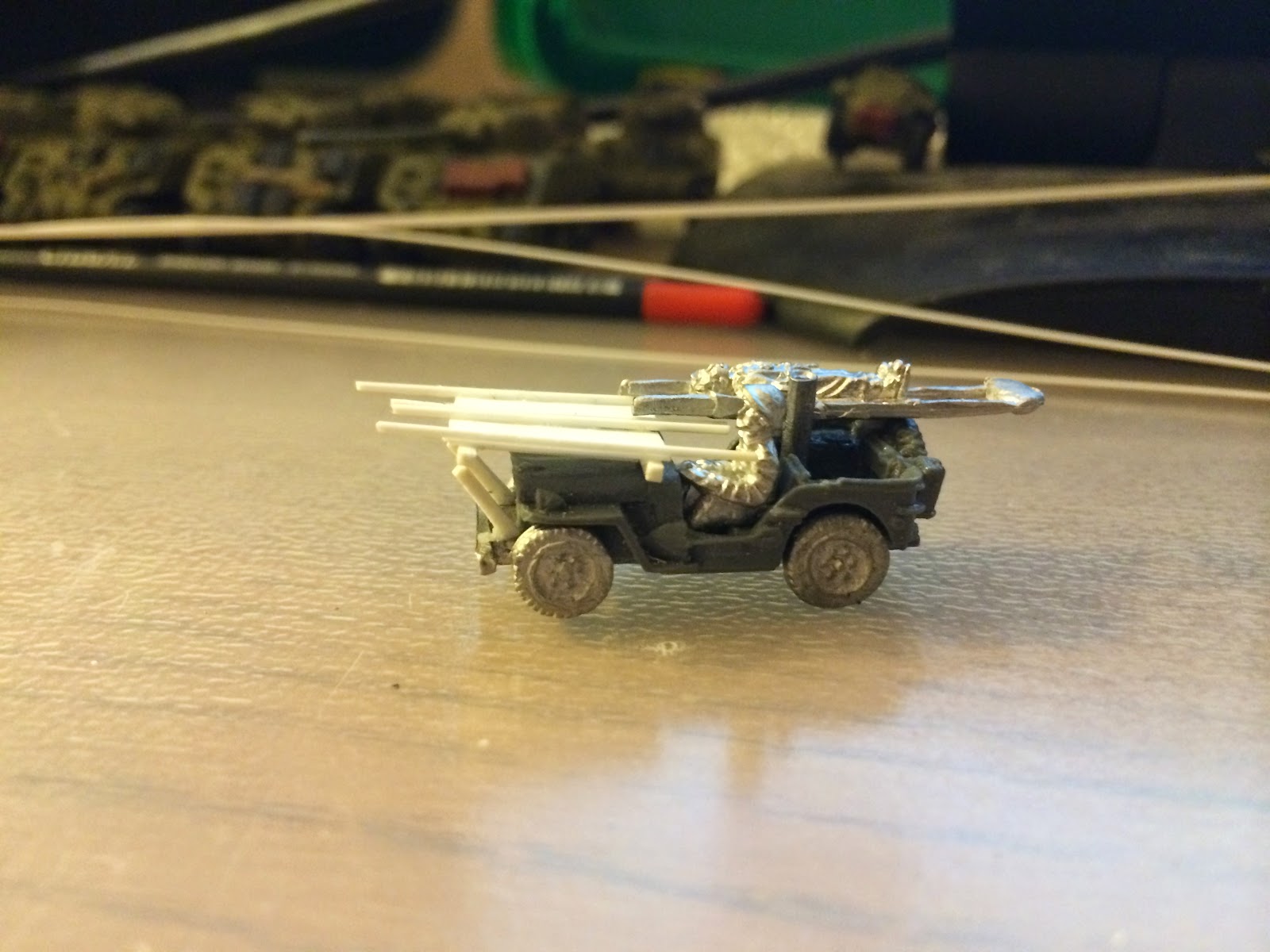 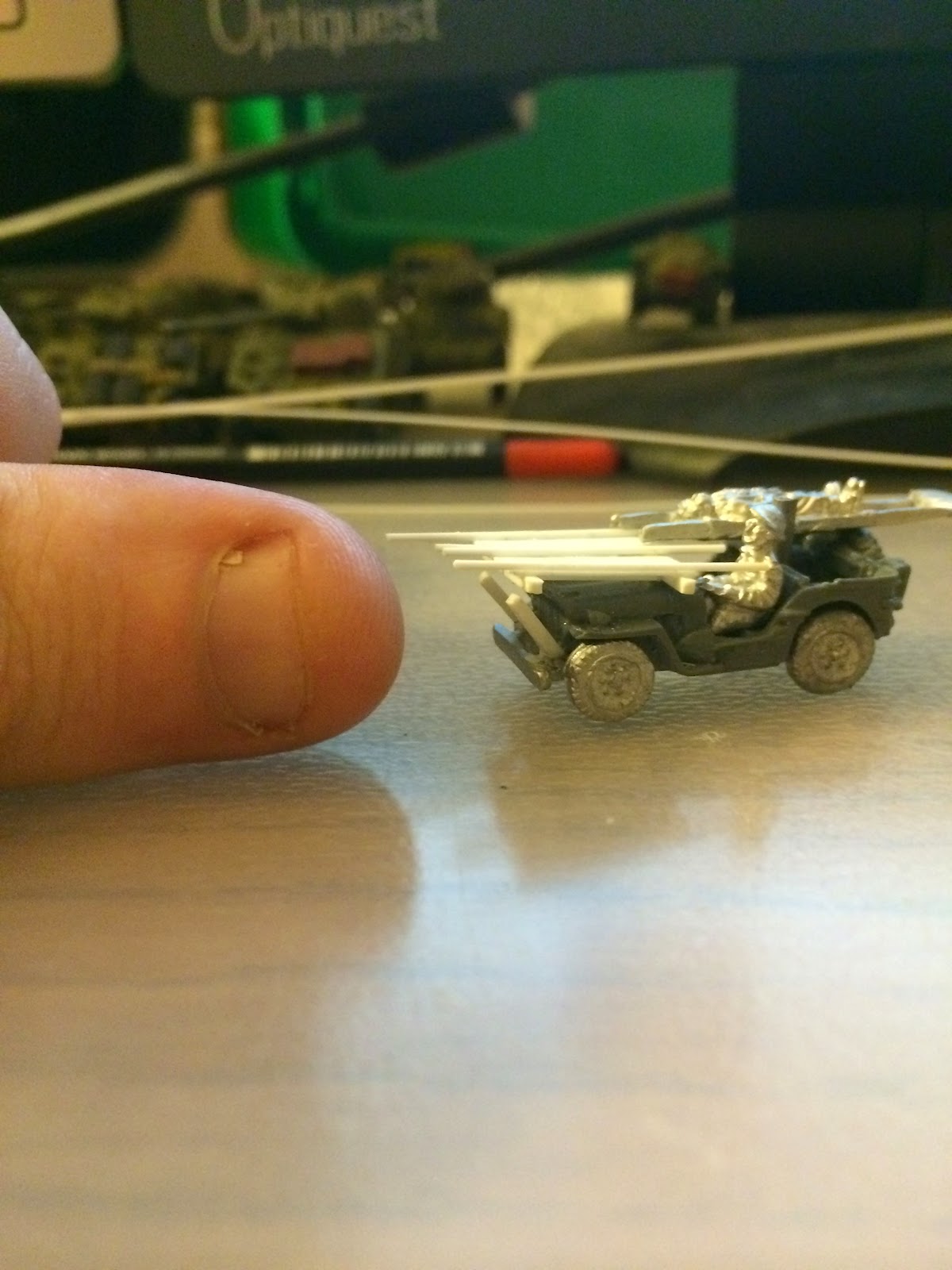 The metal support in the centre is in the pack as a post for an optional machine gun, but I had thought it could be trimmed to act as additional support for the rear stretcher. I'm still not sure on that (and can't find my clippers currently - another victim of the house move) and may remove it.

So that's the plan so far - hopefully I can get it looking decent once all the bits are trimmed and fitted. But it does give me something to work on while I wait for a chance to varnish the small tank horde I currently have sitting on my desk. When it comes to painting this up I will also do the other two jeeps - one which will be a MP jeep and the other which is part of the HQ for my Bofors unit.
Posted by James MacCraggs at 23:25:00 7 comments:

So having put 112 hours into Wasteland 2 (a truly excellent game) I thought it was time to break out the brushes properly and try to crack on with this painting challenge.

Still no completed units painted but I'm getting there. All the main colours are now blocked in, I've spent some time peering at them closely to find mistakes... but so far all good. No doubt more bright blotches in the wrong area will turn up post Armypainter varnish.


So at this point, no shading, highlights or washes!!!

And the pre painting shot: