Another diversion from what I should be painting, but something I had wanted to do for a while. These are 3mm Vanguard Miniatures tanks, proxying as the Ultramar version of the Imperial Army for my Calth collection.

While the realm of Ultramar is exempt from the normal tithe of military units expected from worlds of the Imperium, the realm itself maintains many regiments ready for deployment outside of Ultramar.

The CCIXth Ultramar Auxilia Regiment is one such formation.

The Regiment is a combined arms force consisting of detachments from many Ultramar planets, each adding mastery of their own speciality to the whole. Comprising many tens of thousands of highly trained Auxilia the CCIXth included sub units of infantry, armour, artillery and various support arms. It should be noted that the term 'regiment' is not associated with a particular size of formation, and is more the generic name for a particular body of troops.

As part of Ultramar’s muster of force ordered by Warmaster Horus (supposedly for operation against an anticipated incursion of Orks in the Veridian system), the CCIXth was deployed to Calth alongside numerous other Imperial Army, Titan Legion, Skitarii and Knight units - as well as the Ultramarine Legion and the Word Bearers Legion. With barrack space being at a premium, the Regiment found itself billeted amongst several small settlements on the Northern Continent. In honour of the hospitality they had received, and prior to donning campaign appropriate camouflage schemes, the CCIXth’s vehicles were painted in colours representing the heraldry of the local principality.
On the day of the Betrayal, when the traitors of the Word Bearer Legion and their allies struck, this particular armoured detachment of the CCIXth found themselves without communications with either Regimental or Planetary Command. Initially assuming a planetary attack by an unknown foe, the armoured element took up positions to defend their billets. In time they linked up with units from the Ultramarines Legion, Adeptus Mechanicus Skitarii, Legio Praesagius Titans, other Auxilia Regiment and Knight detachments in order to take part in the fighting on the Plains of Dera against the betrayers – by then the previous well-maintained farmland had been turned to wasteland due to the host of powerful weapons unleashed.

Surviving elements of the CCIXth eventually made their way into the underground shelters following the Word Bearers poisoning of the Calth Systems sun and evacuation of the planets surface. There they continued to battle against surviving Word Bearer forces, protecting the remaining sheltering civilians. After years of fighting in the Underground War, the few survivors went on to form a new CCIXth Regiment.” 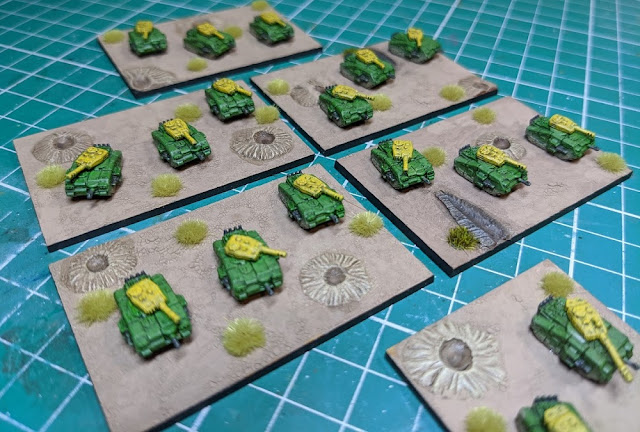 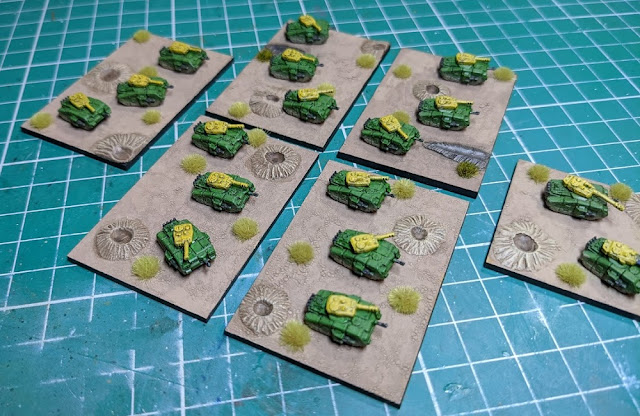 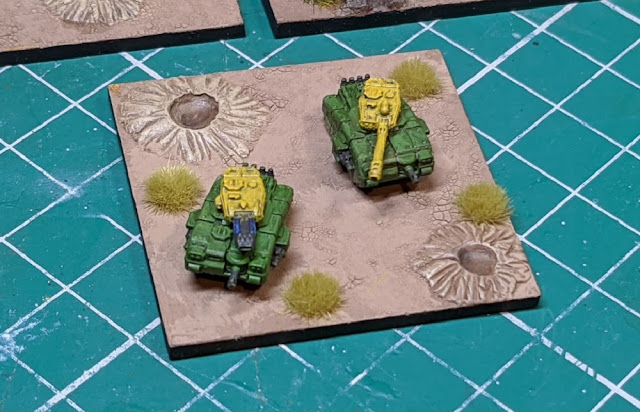 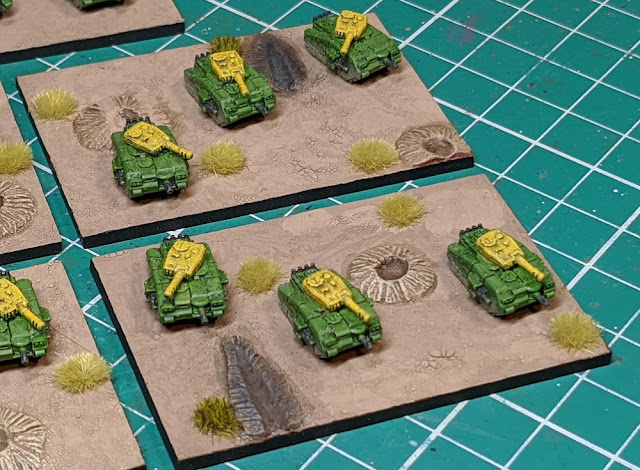 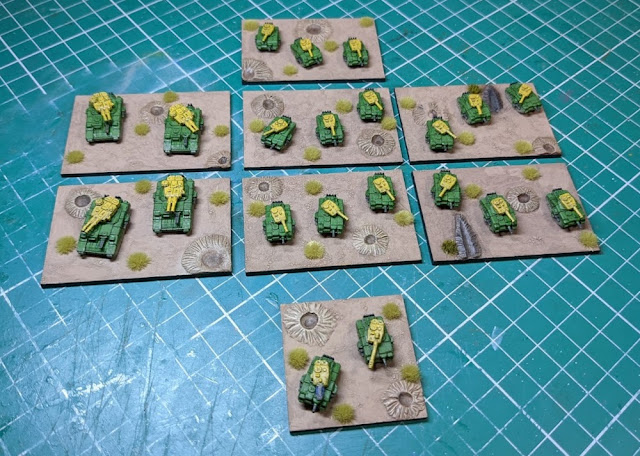 This little lot help me complete the Challenge Island final location, for which Dave has made me a lovely burning Sherman, complete with flickering LED!
Posted by James MacCraggs at 18:29:00 2 comments:

Finished: 15mm Rebels and 10mm Skellies and guns (For Joshua)

Apologies, again I have been pretty lax at keeping up with recently painted items for the AHPCX.

I've continued to focus on the 10mm stuff, the aim having been to get a lot done by Hammerhead on Saturday. This included me basing over 54 units of troops which I have received. Unfortunately, due to circumstances, work commitments and my own anxiety over exposing Amy unnecessarily to this virus, we are no longer going to Hammerhead on Saturday. Which I feel guilty about, but in all honesty I had to call an ambulance this morning because my wife was ill (not virus related) and it scared the hell out of me. Thankfully, she is fine - but those 'underlying health conditions' can be a bugger just on a normal day.

Apologies to anyone who was hoping to see the project or catch up with me at the show.

To make myself feel better, I've also already spent some of the money I would have spent at the show on some goodies. The new Late War British FoW book is out this month, which is an instant buy for me.

Onto the figures. Some 15mm GZG rebel colonists up first. Just a few ladies, which I needed to paint for challenge purposes. There are more on the shelf, but other priorities have parked them for a bit. Nice and easy figures to paint, however, when you have been painting regiments of 10mm. 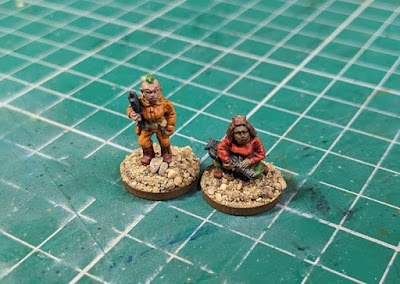 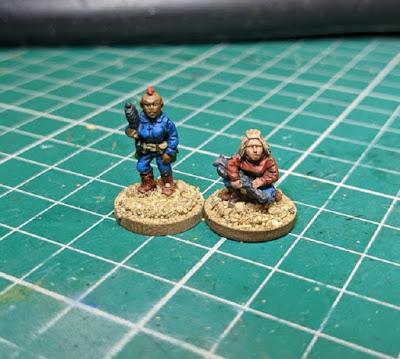 Next up, a load of undead for the 'For Joshua' project: 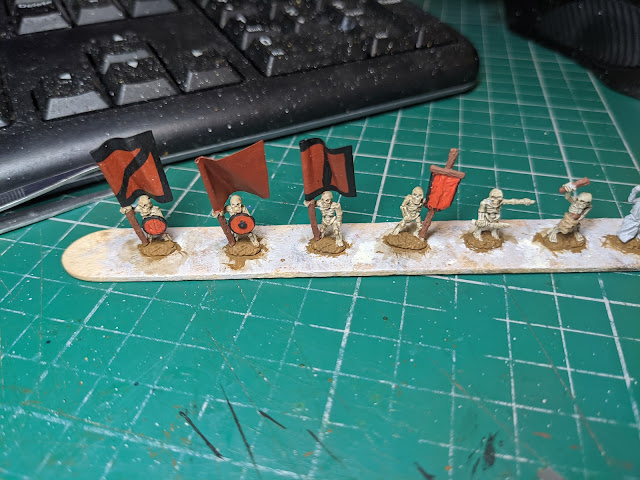 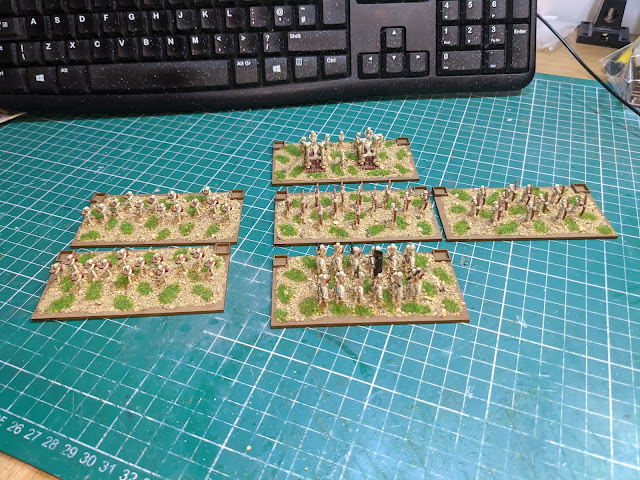 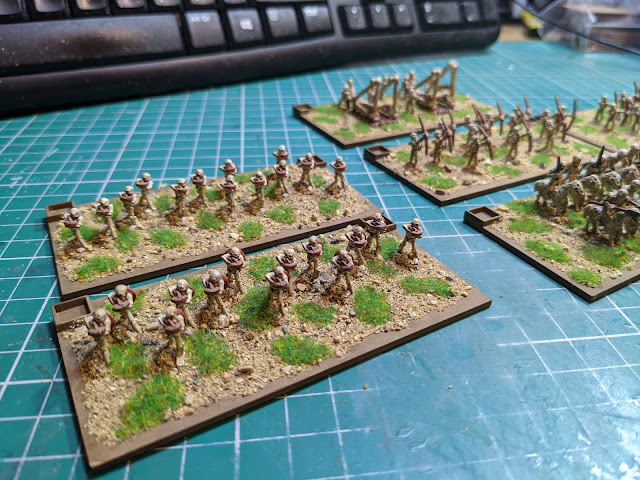 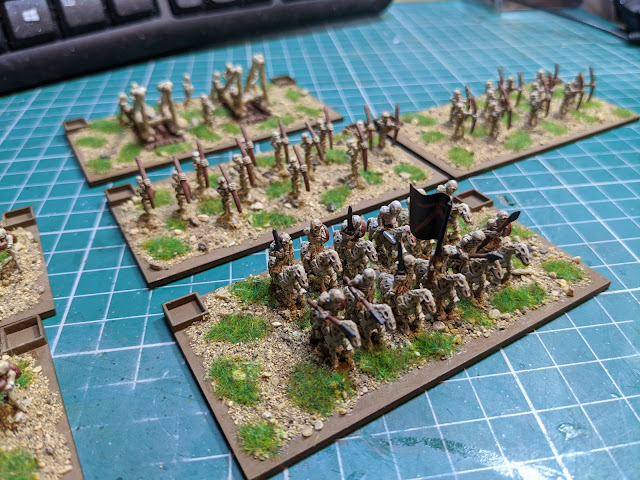 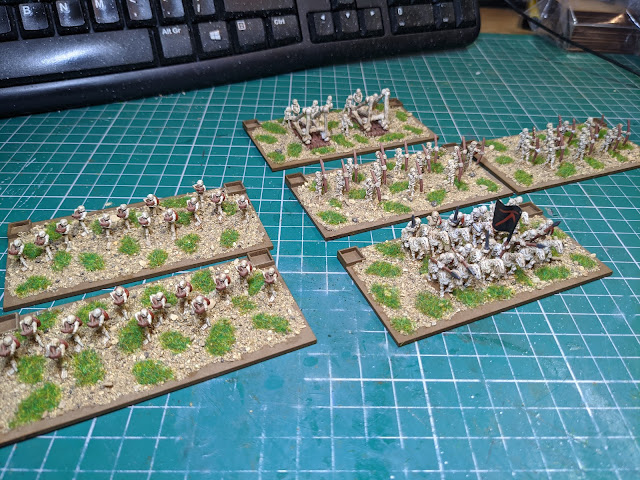 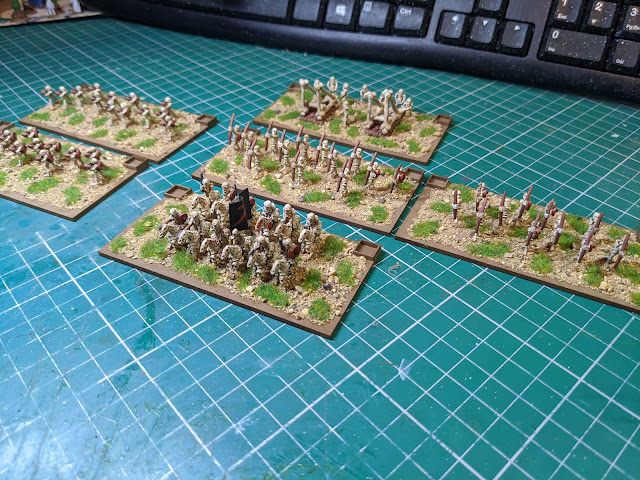 And finally some Pendraken heavy artillery for my knight army (which is coming along very slowly - currently bogged down painting lots of archers). 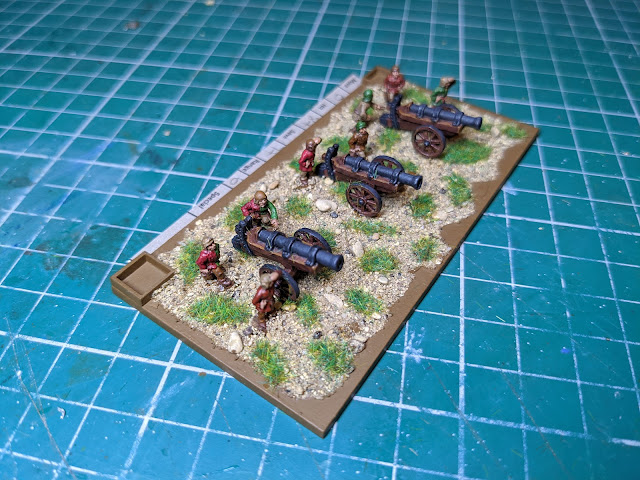 That's it for now. I've a few other bits that are work in progress just now, and will hopefully get finished soon. I'm really wanting to get some 15mm WW2 stuff painted, but want to commit to getting all the 10mm stuff I wanted to paint done.
Posted by James MacCraggs at 20:52:00 2 comments:

Another delayed posting - this time a load of 15mm Ground Zero Games figures finished a while ago for the challenge. 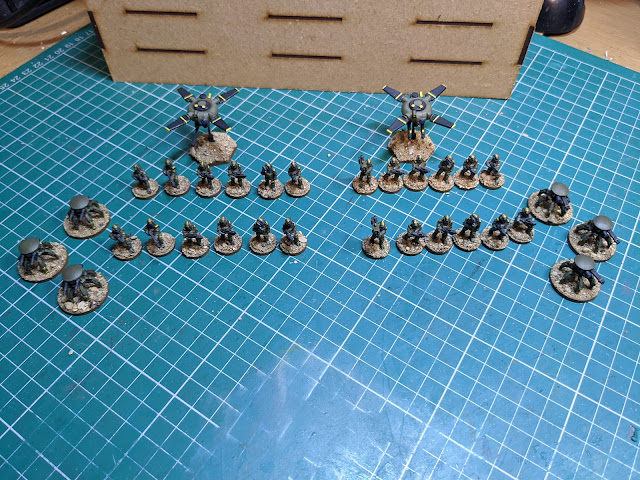 This lot consisted a load of robotic soldiers, a couple of heavy grav drones and some spider drones. 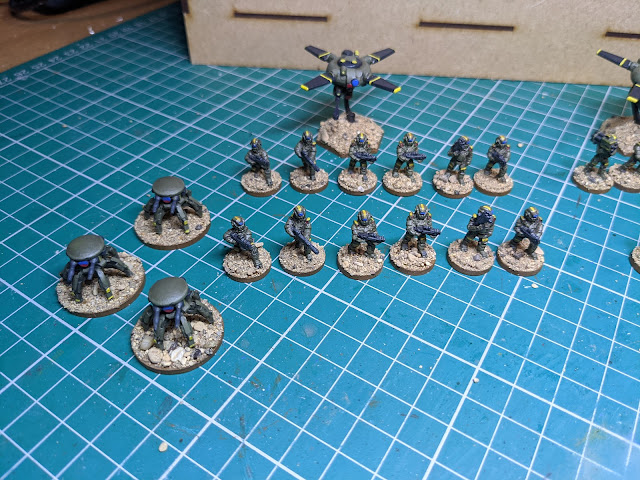 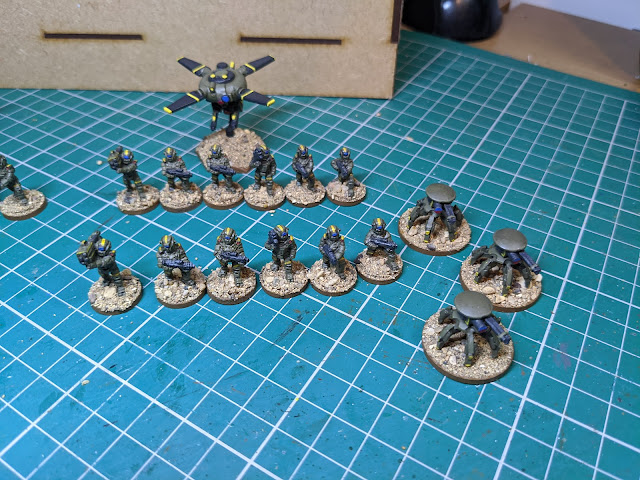 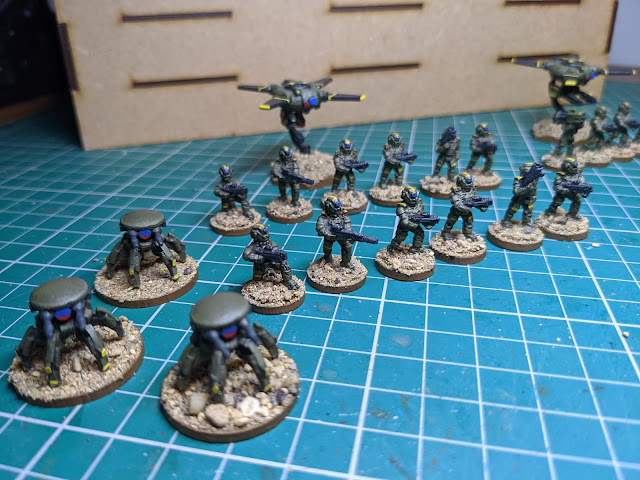 Again, painted up in a military green colour with red and blue lenses and some yellow detailing to show that they were not military units.