Hi folks, with January rapidly approaching we see the start of another Miniature Modelling Mayhem themed painting month. Welcoming the new year with a 'BANG!' we start Gunuary - a month of focusing on artillery and related models.

As usual with our Miniature Modelling Mayhem Challenges the only thing you need to do is post what your planning on working on and then keep the community up to date with your progress! Then let us see the finished article. The challenge is to get your project done within the month!

Your project can be artillery of any period or size. Scale is no issue! From 28mm Roman to 3mm WW1, no issue!

Just post (either on you blog or on our Facebook or Google+ MMM group) what your planning on doing, with pics of the 'before' if you have them! Then keep us up to date with your progress. As I said, the whole challenge is to get your models finished within the month - so you can be as challenging of your time as you want!

My own efforts will be to get my limbered 17 Pounders, Sextons and 5.5" mediums done. Along with various HQ units. I've also got a 'second wave' of artillery related vehicles to complete, but these may be for a later month! 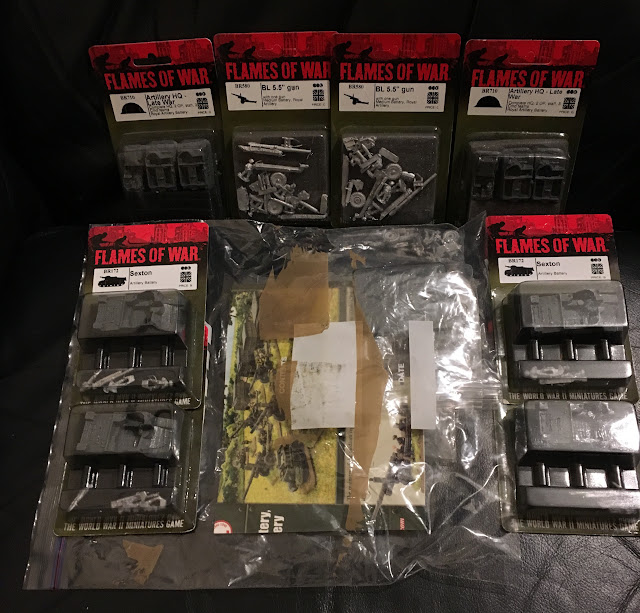 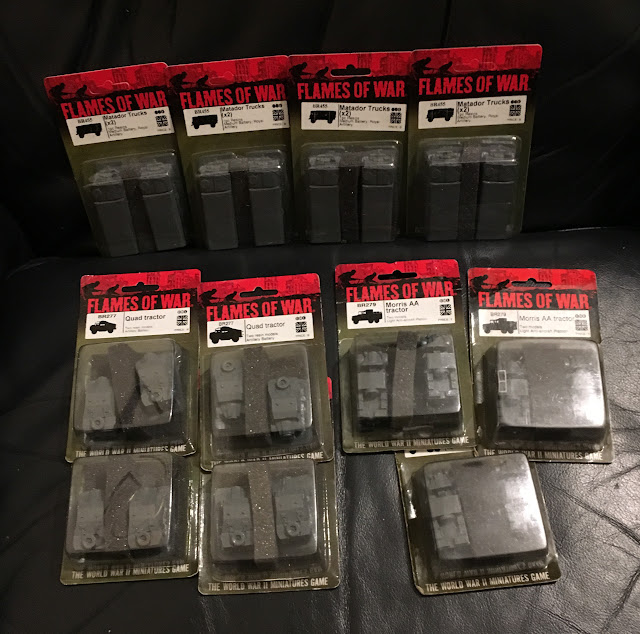 I'm still without internet access and have been using what time I have free after work and unpacking to sort out my new painting room and continue to work on proofing/editing my sisters newest novel. The Analogue Painting Challenge started on the 20th and so far I've not picked up a paint brush! On the plus side I now have a decent sized painting room. Book shelves are up with plans to add a third, my Spitfire picture is on the wall, I've plans to add a 2nd desk and office chair... really pleased with it so far, even with replacing the bulb in the room with a 100 Watt LED bulb to improve the light!

Anyway, later this month should see the return of net access and paint and chats while I get geared up for Gunuary!

I'm planning to get my limbered 17 Pounders done for the start of January to get some points on the board. I'm also thinking of getting my 5.5's done with transport... so the whole command group as well. It looks like V4 Flames of War won't use command stands and lots of OP's - but I'll paint them anyway! I'll also look at any transport needed to finish off my 25 Pounder batteries. My Polish Sextons are also on the cards for early January!

If there is time, I've German artillery and AA to do, British 3" Mortars (another platoon for my planned Poles).

Gunuary is for all things artillery related, so feel free to join in and start the New Year with a BANG!...

In the meantime I'd like to wish all my gaming community friends a Merry Christmas! I hope Santa is good to you all and your lead pile grows accordingly!
Posted by James MacCraggs at 10:16:00 13 comments:

This last week or so I've been rushing to finish off my Polish M4A4 Shermans. As I mentioned on my last post, this was due to the Analogue Painting Challenge starting on the 20th and my upcoming house move on the 17th.

I'm please to say I managed to finish off these tanks, and got a few hurried pics before they were packed away. I've still a few little snagging things to fix, but I'm happy enough with them.

Looking back, I can see I started this Polish project back in August. This means in 5 months I managed to get the whole lot done. That doesn't sound impressive, but for me it's fairly good going - especially considering the amount of work they took to even get to the painting stage and the fact the whole of November was given over to my Novelty November Challenge. And included in that time was a wedding and honeymoon!

These models were all purchased built, and were the original Open Fire plastic Shermans. Those people who have built these kits will know that they are, to use a word from my home land, "Pish". They are a real nuisance to build properly, even for someone who is used to them. Whoever put mine together the first time didn't do too great a job - which is understandable given how rubbish the kits are. Varying thickness of plastic, off square edges, parts that just don't fit together properly.

I had resolved to make use of what I had, as what I had I had picked up for a decent price. 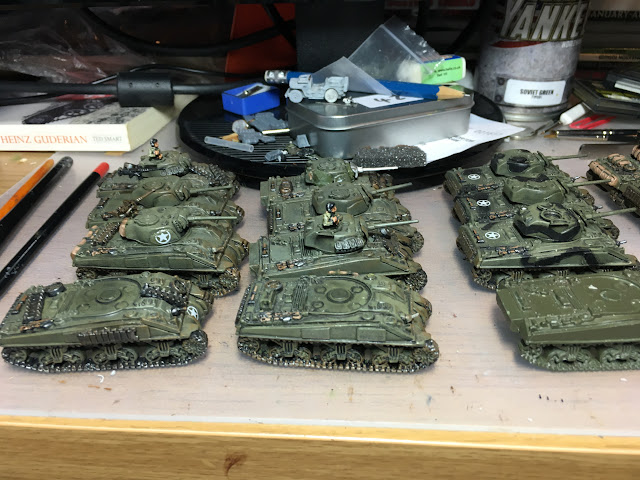 I literally took these models apart with a scalpel. Removed all the haphazard stowage, cleaned them up and put them back together again. 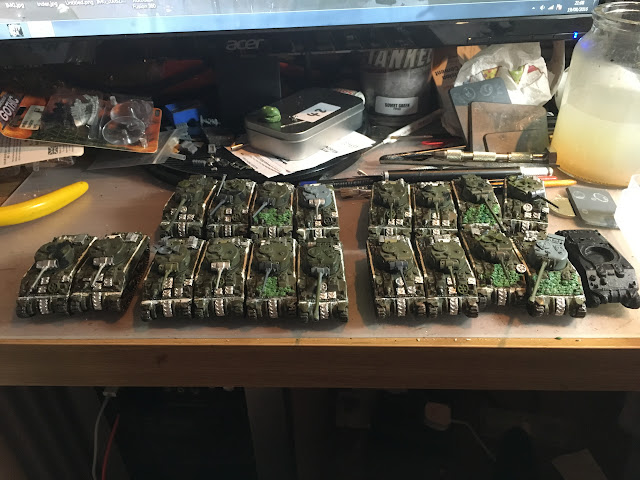 In addition to the 19 hulls above, I also finished off my 144 RAC collection. A total of 26 Shermans!

Of course, I still have the AA tanks, ARV and Stuarts to finish...

These tanks represent the vehicles of No. 1 Squadron, 24 Pulk Ulanow Im. Hemana Zolkiewkeigo - commonly referred to at the 24th Polish Lancers or 24th Polish Uhlans. This squadron was part of 4 making up the regiment, which itself was part of 10th Armoured Cavalry Brigade, 1st Polish Armoured Division (10 Brygada Kawalerii Pancernej, 1 Pulk Pancerny). This unit was a pre war Polish Regiment that fought with distinction during the battle for Poland. The remnants of the unit managed to escape to France, where they again formed to fight the Germans. After the fall of France the unit reformed in the UK as part of the Free Polish Forces. Polish forces fighting in Europe made up the 4th largest army, with Poland being the only Free forces to contribute more than 1 Corps worth of troops. This particular regiment fought it's first battle in 1944 as part of Operation Totalise, forming the '2nd wave' attack on the afternoon of 8th August.

The Polish lists in Flames of War are rather scattered and don't get the recognition they deserve for their contribution to the allied war effort. My own list is based on this booklet. As such, the main fighting component is:

This means the list should have 16 Shermans, rather than the usual 18 for a British list (I painted two spare!).

I have used an early war reference for Polish cavalry pennants to add small radio aerial pennants to my command tanks. 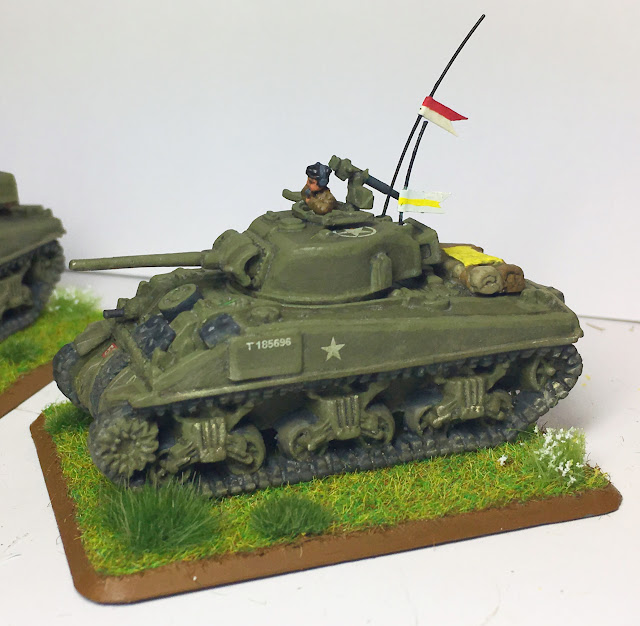 The 1IC, seen above, has a command figure in the turret and two flags. One is the Polish national flag while the other is the pennant of the 24th Polish Lancers. These are not historically accurate I think - although I know that Polish vehicles did use/display pennants. But 'rule of cool' applies and I liked the idea. 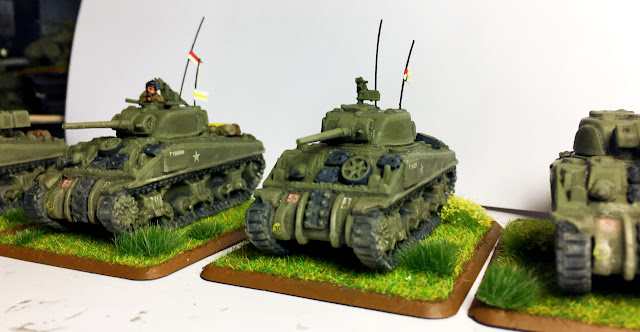 The 2IC tank has a closed hatch, and only one pennant. This pennant is the pennant for the 1st Squadron. 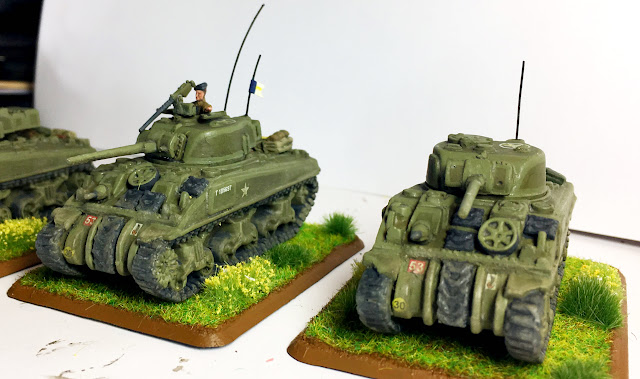 My other troop, which will be my 3rd troop, has the 4th troop flag on the command vehicle (the 3rd troop flag was largely white, so I went for the darker one).

All 11 tanks - Sandbags were used to cover damage to the hulls from the previous poor build.

Apologies for the lighting and pics, they were taken in a hurry before I packed up. I'll try to get pictures of the whole unit together as part of my new year blog post. However, I will be without regular internet access for a few weeks, so expect things to be a bit quiet!

Thanks as usual to the MMM Paint and Chat crew, and also the Paint and Chat guys in the Analogue Painting Challenge group for putting up with my table full of Shermans for oh so long!
Posted by James MacCraggs at 00:31:00 11 comments:

I realised that I didn't do my normal update last weekend, but as I had a recent splurge of posts quite close together, I thought I'd hold off till I had something to report.

Having finished my November Challenge, I took the rest of the month to just relax and prepare for the rush that will be December. But why the rush? Well, I decided this year to take part in the Analogue Hobbies Painting Challenge.

I don't think I'll be hitting any records, but my aim is to paint 500 'points' of figures over the 3 months, and in that period I will be having 'Gunuary' in January. 500 points will be a bit of a push, given the scoring system:

And possibly some 3mm... which there is no scoring system for! So 500 points will be a decent number, if I can reach it. I think Gunuary will help as I have guns, vehicles and crew figures all in my sights for my Flames of War armies.

The challenge starts on the 20th of December, so I'm taking part in the MMM 'Winter Campaign' with a pledge to finish off my Polish Shermans before the 20th. That timetable has had to move slightly, as I'm moving house on the 17th of this month (6 days time!!!). This is a bit of a surprise change in circumstances but a fortunate event occurred and we have access to a rented house at short notice without all the usual cost. Thankfully the new accommodation has a spare room which will be a bit of a painting den for me, with a sofa bed for occasional guests. It also has a detached garage, which will allow me to get a gaming table set up!

While Amy is just please to get 'my crap' out of the living room! I have no idea how the move will effect my painting, but rest assured the excuse will be banked should I fail to make my 500 point target!

unlike most of the 'serious' entrants, I have done no prep work at all.

So far the Polish Shermans are progressing, with all 11 of the final batch painted, shaded, highlighted and with decals on (as of tonight):

In other news, whilst out and about last night I came across an actual Alien - although probably a pet one rather than an invasive one. 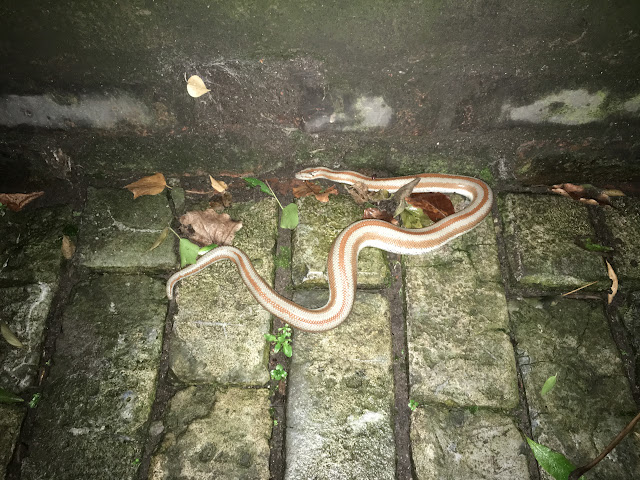 This fellow was at the side of a lane in very wet and quite cold Norton (in the North East of England). As a Striped Corn Snake, this is pretty far from 'his' natural habitat of North America! While very cold, 'he' was alive. After a bit of dilly dallying I managed to get in touch with the RSPCA, who sent out one of their people to collect him and get him to a vet (I use the male pronouns but have no idea as to the sex of this snake...). While waiting I got him in a towel and into a box with a bottle of warm water until the cavalry arrived. Quite a strange turn of events for a run to the shops on a Friday night!


I also managed, the week before last, to get to the club (the Old Guard Wargames Club - meeting just outside Northallerton) and play a game of 'To the Strongest'. A good (if somewhat biased... not reflecting the true planned (not at all seat of the pants) and glorious nature of my our victory) review of the battle can be found here, on Roy's Blog. I've some pics of my own, showing my Greeks  triumphant advance against the attacking Persians! 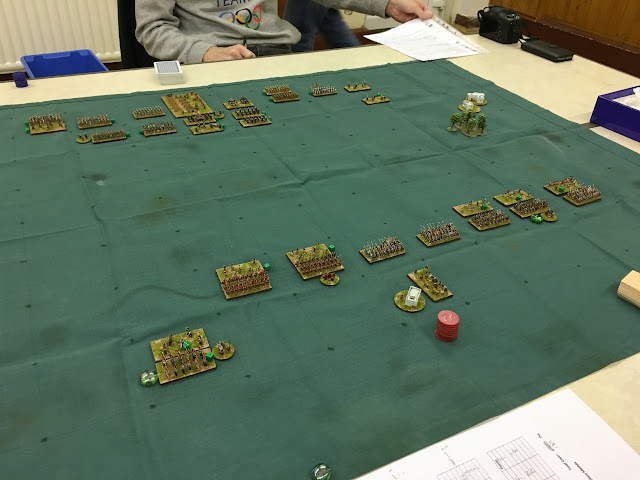 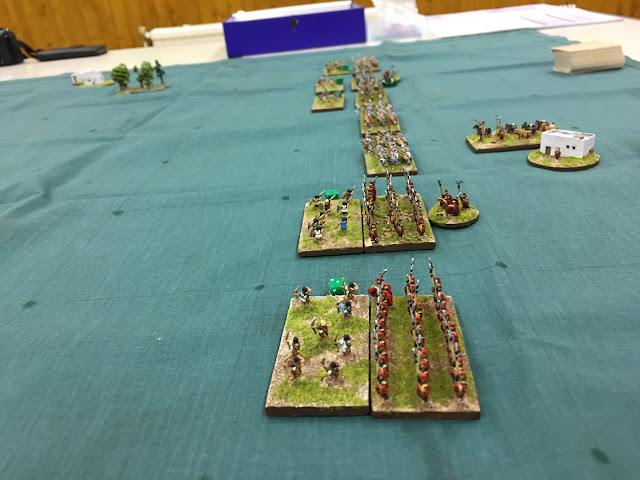 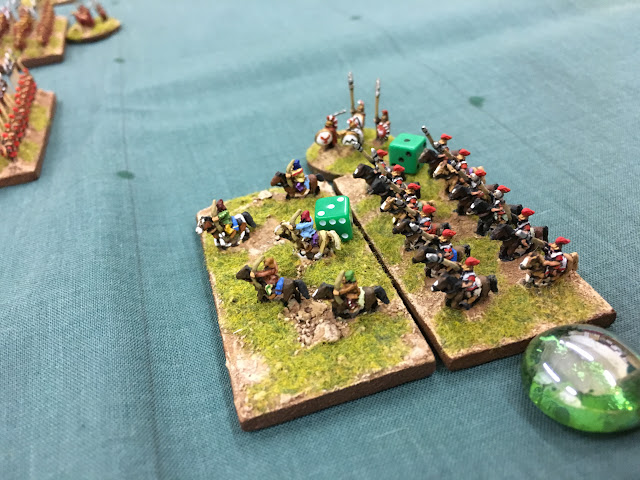 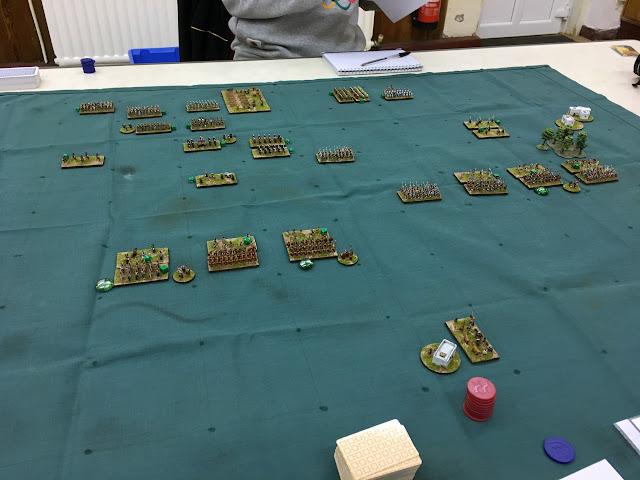 In all honesty it was a very close game, with my somewhat reckless attack (when I was supposed to be defending) seeing us (myself and Stuart) one destroyed unit away from defeat - and Roy with a slightly healthier force. In our last turn we managed to destroy one unit and then capture Roy's camp (in a 'not at all tricksy Greek sneak attack' way) meaning we won the day (with one single one of our 'medals' remaining - having taken 5 off Roy in that turn).

I enjoyed the rules, and the card rather than dice mechanic. I'd happily play again!

So, until next time!