So not much in the way of painting done recently. I've been prepping models for my next couple of projects, going with both 'old' and 'new' ideas.

For the 'old' idea, I've built and prepped 9 Battlefront Humber VI Armoured Cars and 6 Humber Light Recon Cars. This has included sorting hatches, drilling out holes for radio aerials, adding stowage, etc. The only thing still to do before painting is drilling out and magnetising the turrets.

These models will make up the three combat platoons of my 2nd Derbyshire Yeomanry squadron. This unit was the recon regiment of the 51st Highland Division. 'Famously', they were equipped with Daimler I Armoured Cars - but as it turns out, this happened from September 1944. So for the Operation Totalize period (August 44) they still had the Humbers. I sold the painted and unpainted Daimlers I had on to Martin, where they will become (I believe) Belgians A/C's which fought with the Paras.

For this force, I will also have some 6 pdr A/T guns, Mortars and Halftrack mounted MG Pioneer teams to add, but I am going to focus on the A/C's for now.

The other 'old' thing I'm working on are three more Sherman 'Crab' Flail Tanks. These will be added to the two other 22nd Dragoons Crabs I painted back in 2014, bringing the full troop up to the historic five Crabs. I like to see these on the table in the bigger games we play, so I wanted to expand the numbers a little to provide more options. As I did with the original two models, I added a 'green stuff' attempt at a canvas covered gun mantlet, as well as thinner costume jewellery chain for the flail drum (the stuff that comes with the model is just too thick. The thinner chain I used is still out of scale, but looks a lot better I think. My top tip if you plan on doing this is buy double the amount of costume jewellery you think you will need, as it never goes as far as you hope!).

The 'new' project is the DD tanks, both swimming and deployed. Two of the swimming DD's came painted, but I will be repainting to match the three I painted previously. The deployed DD's will be from one of the Canadian regiments that landed on Juno beach. 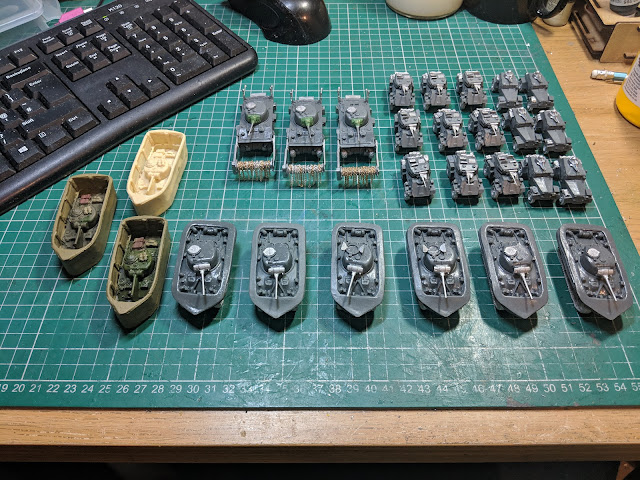 I'm not setting any sort of time scale expectation for these models. Hopefully once they get a base spray coat, the DD's should be fairly quick to do, though I am a bit stumped for basing on the deployed DD's. I want to keep to the same style as the rest of my army, but at the same time accept these things will be on a beach at some point.

The Armoured Cars I will try to do in batches of five, and I'll probably do the three Crabs at once. Although when it comes to highlights and such, the previously finished models will also get some work to try and bring them to the same standard.

So that's it for me. Tomorrow see's a 28mm ACW game played on a 6' by 17' table at the club in Billingham - our first time with this size of a layout, and playing with Martins growing 28mm ACW collection. Pictures should follow!

Having been sidetracked into starting another batch of minis, I finally got the basing on my last few mini's I had prepped for the AHPC Challenge that finished last month. My final four (for now) Quad Tractors: 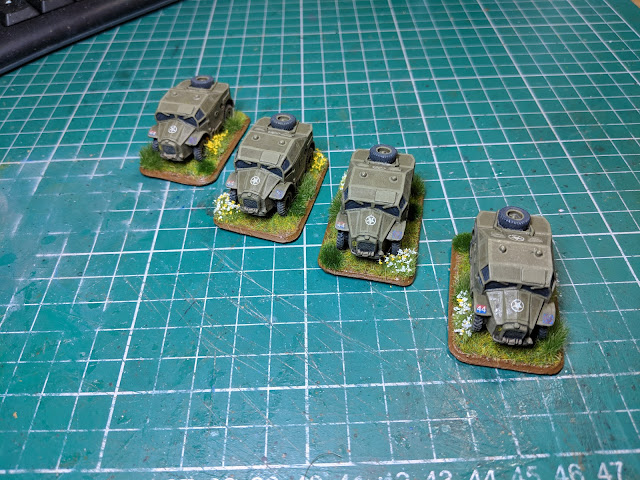 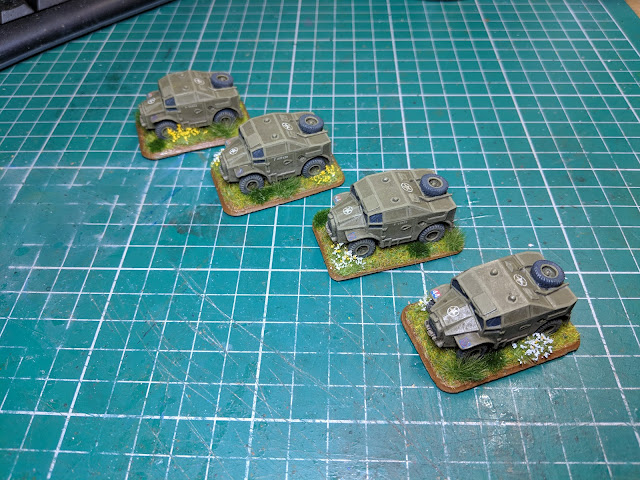 Nothing hugely special about these guys, as i have recently finished the other four for the battery. However, it was a nice moment for me to have the whole unit 'finished' to a certain degree.

Then there was the small issue of my earlier Quads being in my version of 'mickey mouse' camo, whereas the new Quads were not. So I decided to have a rethink.

As such, my 'new' Quads have gone on to form a battery of 128th (Highland) Field Regiment, to support my 7th Bat, Argyll and Sutherland Highlanders of 154 Brigade.

My 'old' Quads, and associated vehicles, have now been re-badged to make up 4th Field Regiment, RCA. These guns will support my Canadian Infantry Company from 2nd Canadian Infantry Division (Infantry Regiment is TBC), and represent guns which feature heavily in one of my favourite Normandy accounts, that of George Blackburn. His book, The Guns of War, is stunning. Eye opening, engaging and hard to put down. Well worth a read if you've not read it yet. 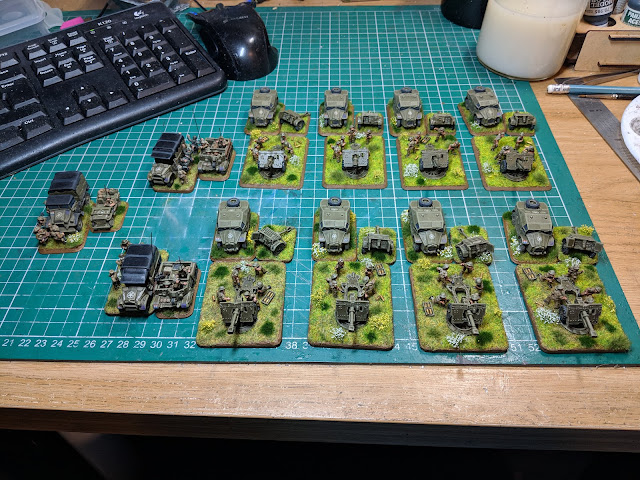 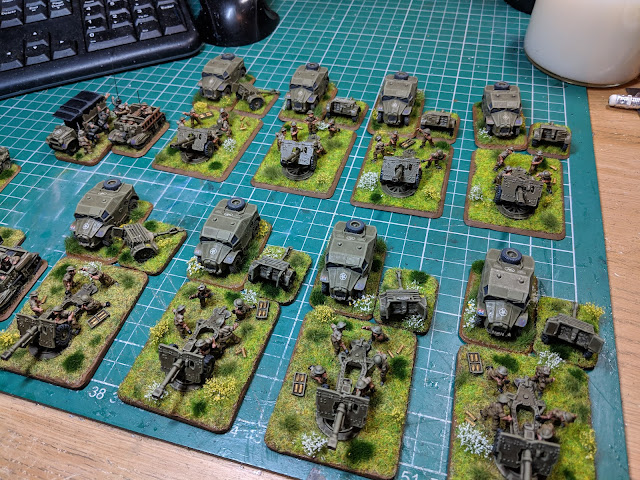 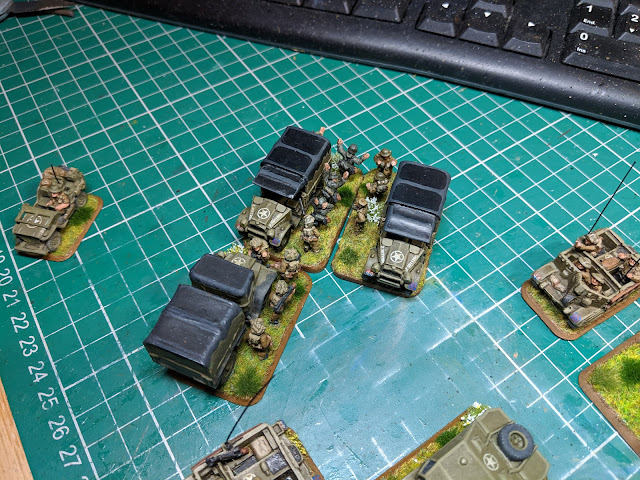 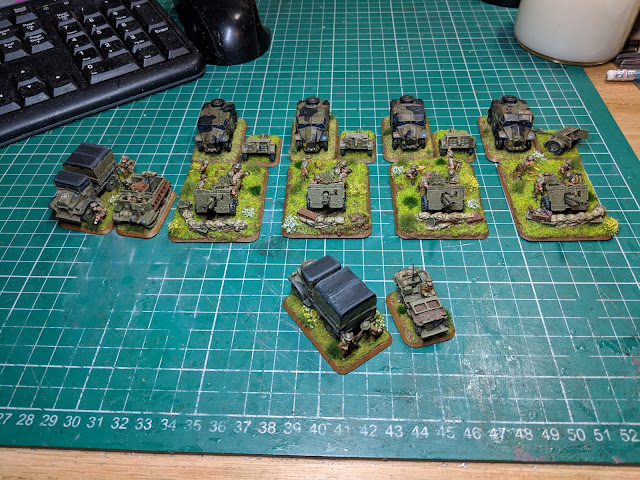 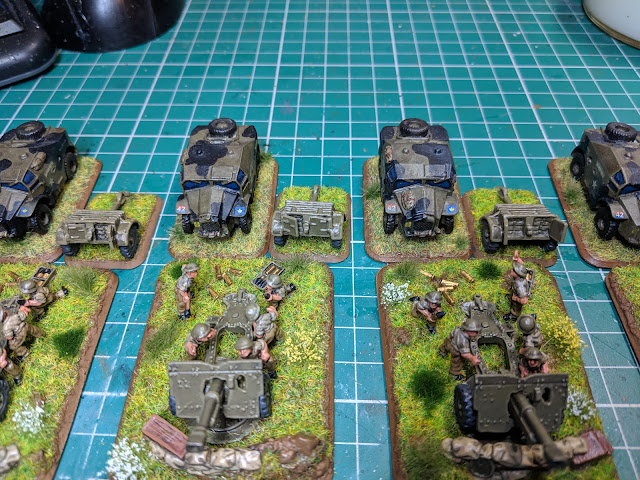 This has neatly allowed me to separate out different styles of painting and gun basing, into different units.

I've a bit more work to do updating bases and possibly highlighting old Quads, but on the whole, I'm happy I took the time and effort to sort out the new unit markings.

On the building queue just now are 6 Sherman DD's and three Sherman Crabs. Tonight I also dug out my 2nd Derbyshire Yeomanry Humbers, as I'd like to add more recce to my Brits. Meanwhile, Dave is cracking on with some fantastic American D-Day stuff for our mega Utah Beach game on the 2nd of June. Stay tuned!
Posted by James MacCraggs at 00:49:00 10 comments:

Having finished the challenge, I've been progressing at a more modest pace. Slowed slightly by the fact I have had three units on the go at the same time.

This weekend I made a bit of an effort to get some stuff finished, which ended up with my Stuarts done alone with most of a unit of SP Bofors guns for my Poles. 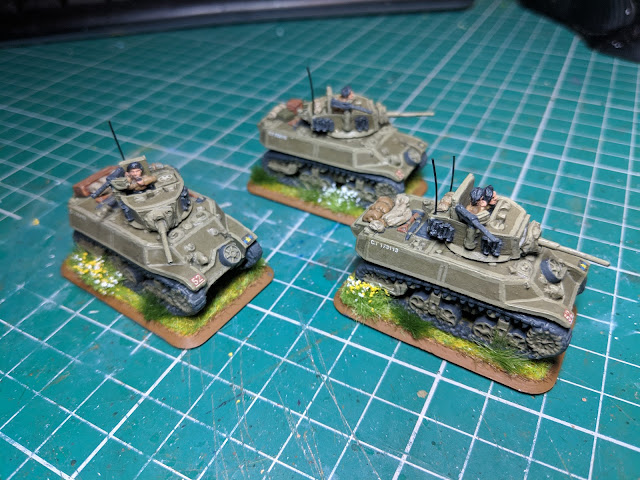 The Stuart's turned out to be a little bit of a hassle, mainly as they had been intended as recce Stuarts to finish my 24th Polish Lancers list. However, when it came do doing the decals I realised these are the wrong type of Stuarts, being V's rather than the VI's the Polish had. Main difference being the slightly different shaped hull, and the Polish tanks appear to have the triangular machine gun protection shield on the side of the turrets. Some hasty research revealed that the Sherman units of 2nd Canadian Armoured Brigade used Stuart V's. As such, these chaps are my first Canadian tanks, aside from the swimming Shermans I completed during the challenge. They represent Stuarts from the HQ Squadron, 10th Canadian Armoured Regiment (The Fort Garry Horse). I figured everyone normally does the Sherbrookes, so I would pick something different. Tanks from this regiment also formed the right hand flank column to the 144RAC column during Operation Totalize.

Decals include CT War Department numbers, Brigade and Regiment markings and a single HQ Squadron diamond on the turret - the busyness of the turret doesn't allow space for both sides.

As per usual with my recce forces, I've got a commander in each turret, with the unit commander having two turret crew and twin aerials. 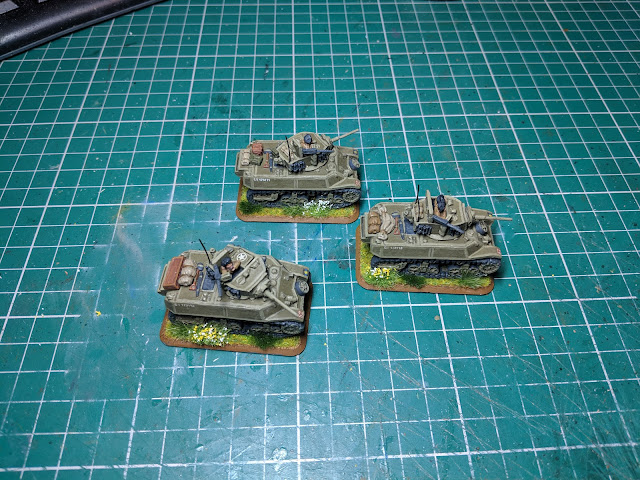 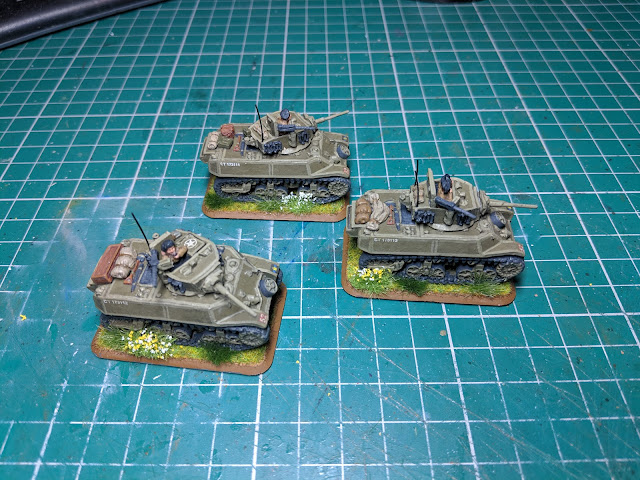 Finishing touches post pictures was to add some basic weathering in the form of dust and soot, as well as magnetising the turrets, something I had forgotten about previously. A cool looking little unit. These are 15mm Battlefront models.

I did make some efforts to ensure I had the Stuart VI's for my Poles, however all the models I had as missing the turret attachment. I've now got a trade deal with Dave to swap some resin tanks for PSC Plastics, which come with the turret option I need.

The other unit I was working on, another add on for my Poles, took the shape of most of a battery of Morris SP Bofors AA guns. I need to build and paint two more in order to make up the whole unit for these, but the models didn't arrive via Battlefront until the end of the challenge. When done, I will have a battery of these each for my Poles and Canadian Armoured forces - a quirk of a gift from a friend and then picking more up second hand in a large Ebay lot. 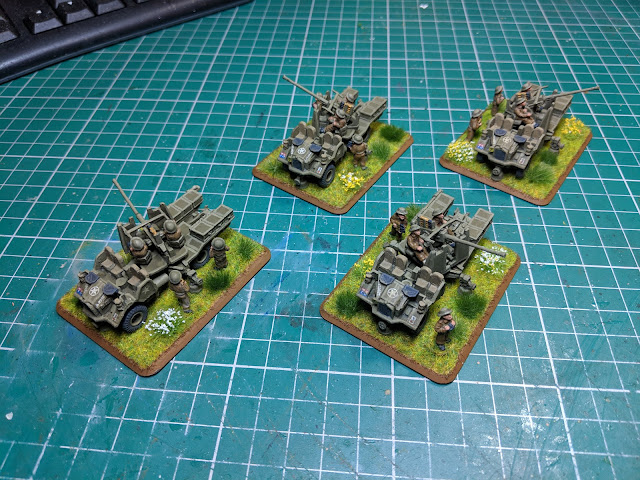 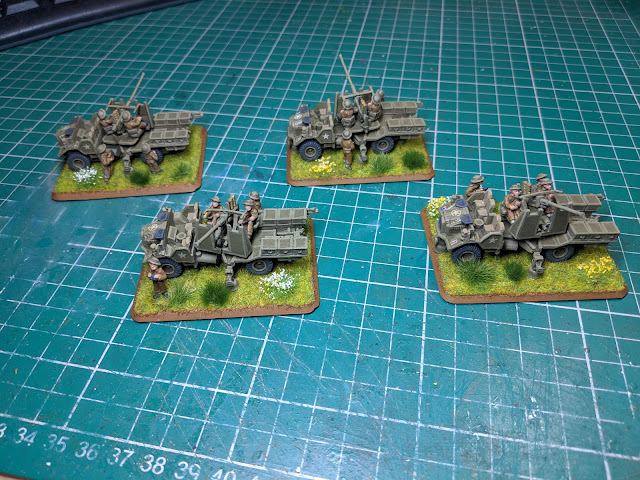 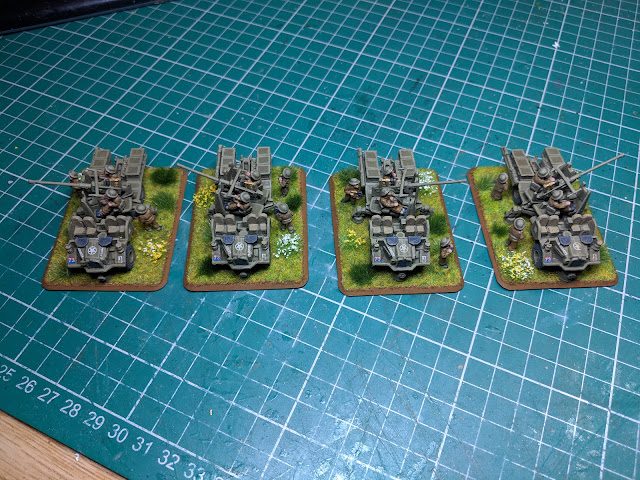 I've stuck to my usual basing style for these, and I think they look a lot more substantial with the base and crew figures rather than the unbased truck alone. I've not added a driver model, as I figure he wouldn't be sitting there while the gun was in operation.

These models are for '1 Pulk Artylerii Przeciwlotniczej', the AA regiment of 1st Polish Armoured Division. This is definitely one of those units that seemed like they would be much more effort to build and paint than they were, and they look really cool once done (at least, I think so!). Models are 15mm and from Battlefront.

Last unit of the trio to finish are some Morris Quad tractors, again for a 25 Pounder battery. Although I am slightly tempted to mark these up as 2nd Canadian Infantry Division Quads, and re-visit one of my gun batteries to update the uniform colour slights. Only because I have artillery for every other allied unit other than that one! I'll have a wee think before I progress.

Next up, I have a load of MDF trays to make for Really Useful Box storage, and a my next batch of models sitting awaiting assemble. These will be Sherman DD's and some Crab Flail Tanks - so I may take a quick go at something else before I start painting more tanks!
Posted by James MacCraggs at 00:15:00 1 comment: