After more than a week at picking away at 12 x 10mm figures, I finally got them done and based. The netted me a nifty few points for the AHPC X challenge. 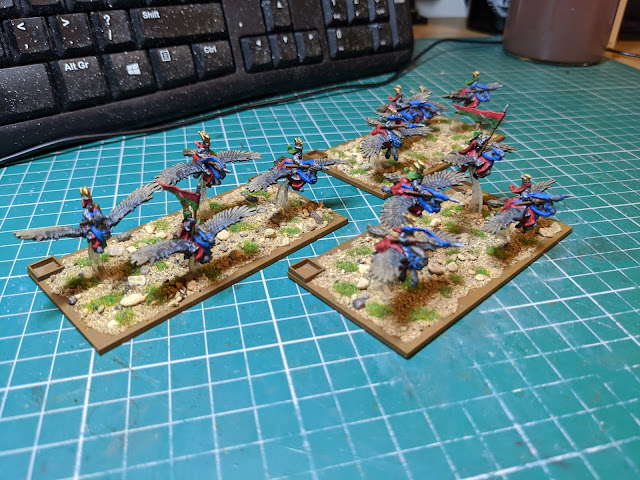 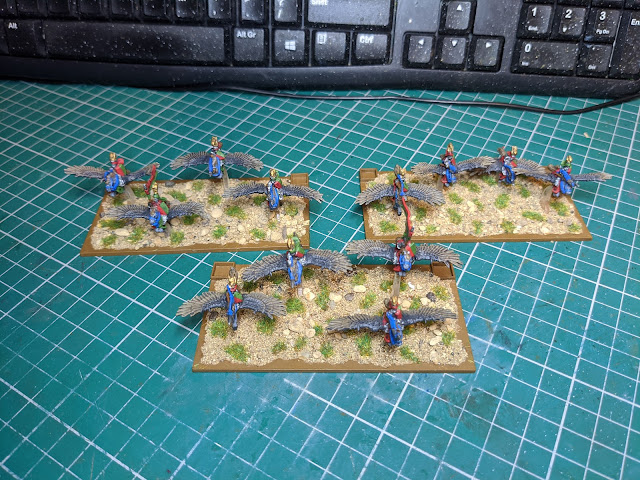 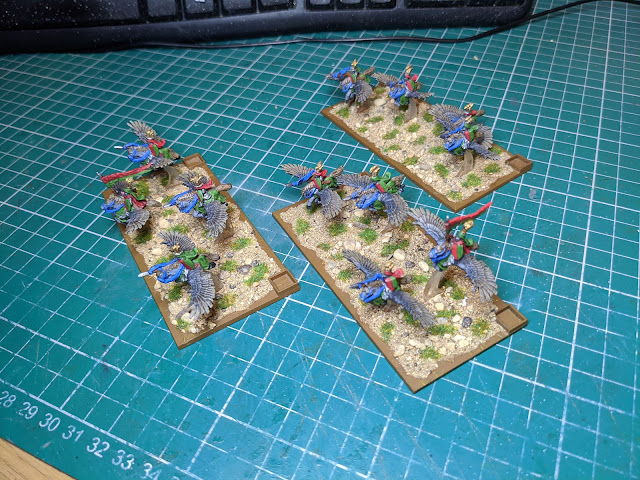 These are models from Polar Fox Studios, which were meant for Warmaster proxies I believe. I picked them up at the same time I bought my General on his Hippogryph. 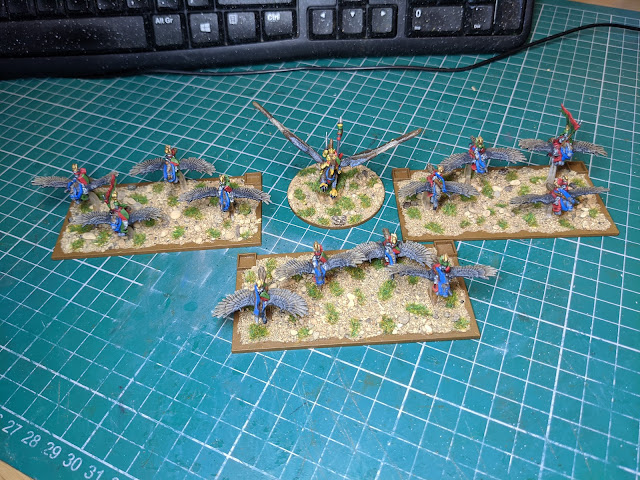 These knights are the 'Kings Guard' and are elite warriors mounted on flying steeds that they must find and train themselves (with the aid of the blessings of the Lady of the Lake, of course).

Below are some shots of the whole human force I've painted so far: 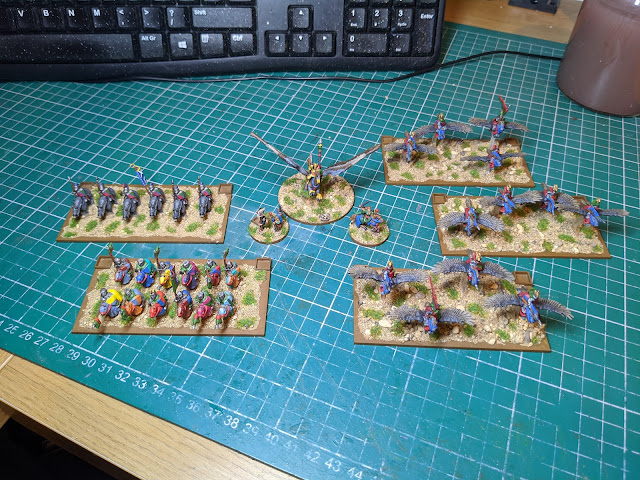 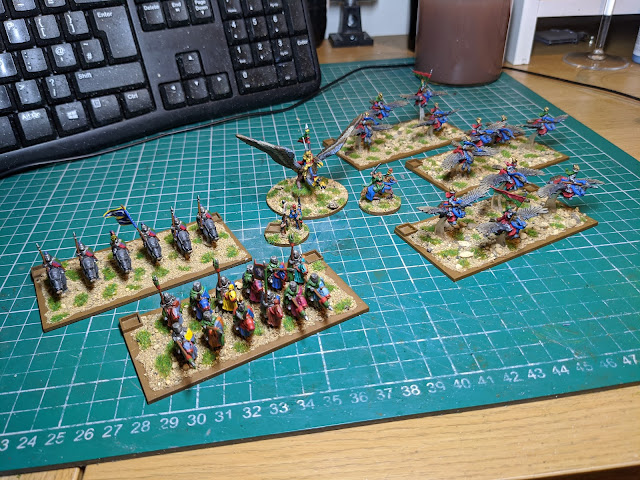 We appear to be heading towards using a version of 'To the Strongest' for our planned participation game at Hammerhead in March. Hopefully I will have bulked out this force by then and got a few more of the models others have sent me based.

I'm not sure I showed off my completed wizard bases for this army, also figures from Polar Fox Studios: 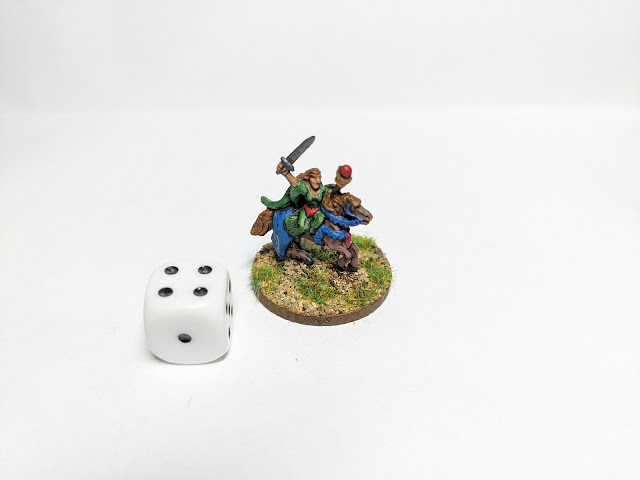 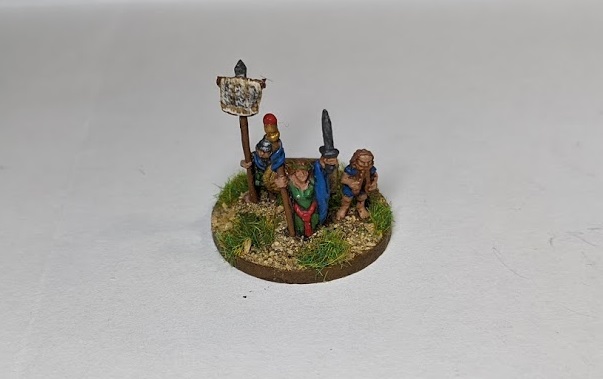 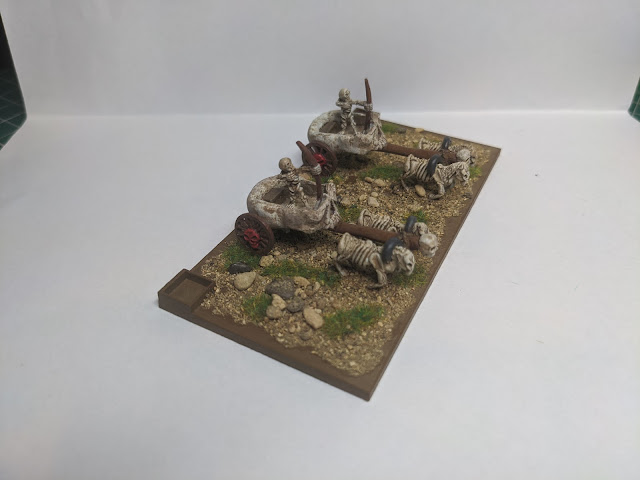 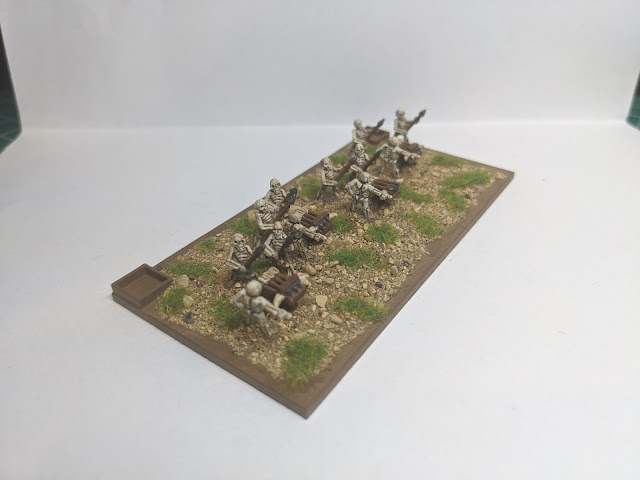 Currently on the paint pile is a base of Cannon for my knights along with a load of archers and some light yeomanry cavalry.

I'm off to the York show this weekend, so hopefully will pick up a few bits and bobs I need as well as collecting two painted armies that are being donated. Looking forward to seeing those, and need to start thinking about storage and transportation options!
Posted by James MacCraggs at 20:28:00 6 comments:

Some slight progress to report on the painting front, if unusual for me. A couple of Ground Zero Games 15mm Sci Fi 'grav' 'Wasp' drones.

I picked these up a while ago at a show, as GZG were present. They've been in the lead mountain for a while and I thought since I have been focusing on painting 10mm fantasy, I would give myself some 15mm military stuff to do as well. 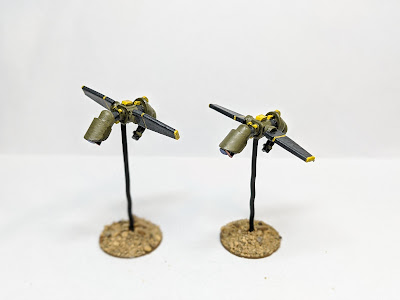 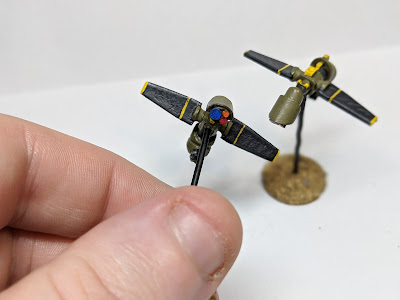 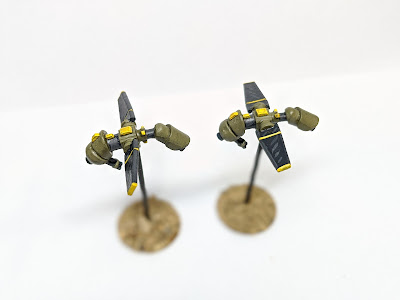 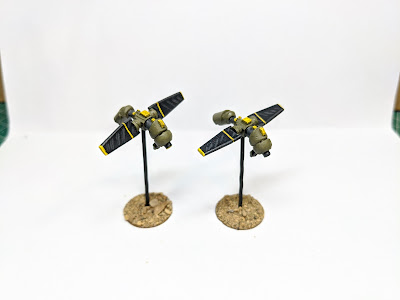 I've painted these up in a 'corporate security' type scheme. I've an idea for my 15mm sci fi stuff that it will be based around the banning of research into 'true AI', which is being undertaken irregardless by corporate entities on far off backwater colony worlds. Forces I am painting include military/police strike teams, civilian rebels and security drones/forces/Mad AI controlled forces. These should let me do some low level skirmish games, rules to be decided.

I've a few other things in the works, just need to finish bits off and get them posted to the AHPC competition before I can post here.
Posted by James MacCraggs at 17:16:00 No comments:

With the new year, new effort has gone in to getting dates booked for regular gaming sessions at our local venue. Also known as attempting to herd cats when it comes to getting at least four gamers together on one day.

As such, to start things off we got ourselves sorted out for the first game of the year in Billingham at the new location of the dance studio we use. A much bigger room with adjoining space... which of course set us to wondering how many more tables we could get!

While I remember, Martin's report on this game can be found here. 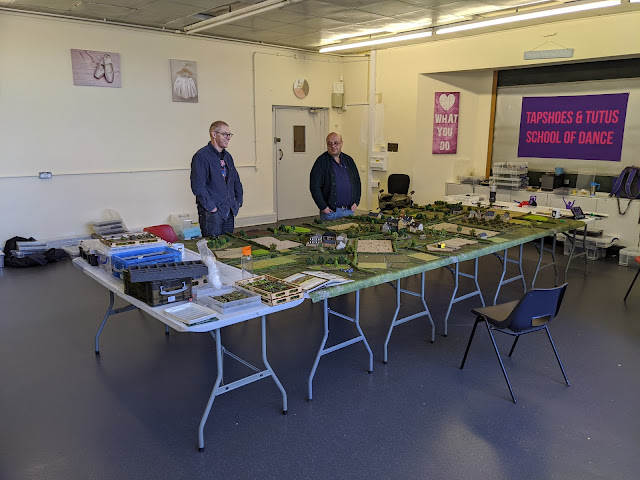 We had a little discussion about games after our last meeting in Scruton in December, but in the end I decided to 'host' this one, as my FoW stuff hasn't been out the boxes much. Dave had offered to do something with his Americans. My recent reading has been about the Canadians in Normandy so I figured I would set up a game to reflect some of my reading.

I really had three major aims for this game:

1. Try to represent the situation in the days following D-day, when things were still in a state of flux and the German troops were being deployed into the fight with little coordination. The German units in Normandy, while having some experienced officers and NCO's, were just as prone to tactical mistakes.

2. Try to show the guys how the Commonwealth/British troops have to work in defence, as they have mainly only ever been attacking during our scenario games.

3. Try to show that tanks can't hold urban areas, and the importance of combined arms.

The tables were set up reasonably quickly. I provided the rough outline and the guys set to arranging bits. 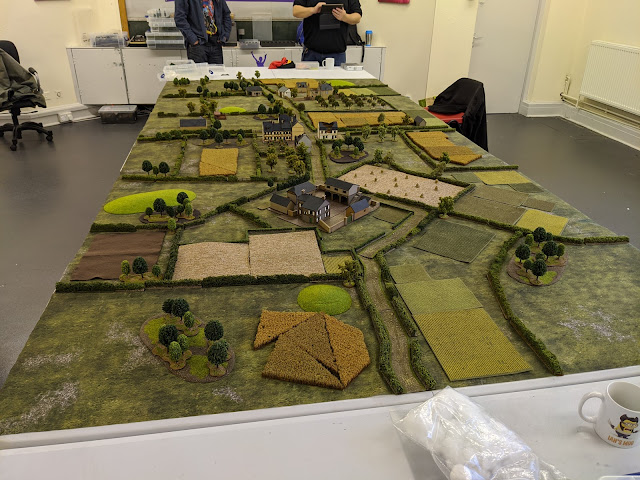 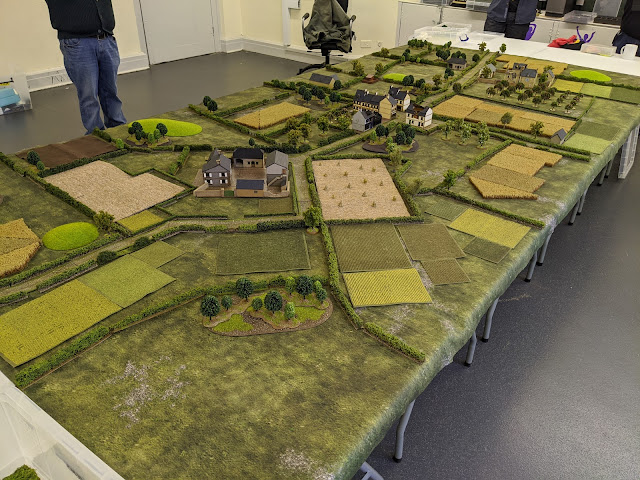 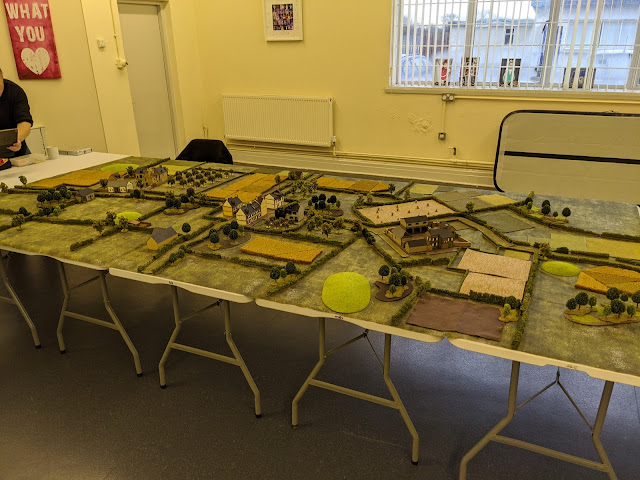 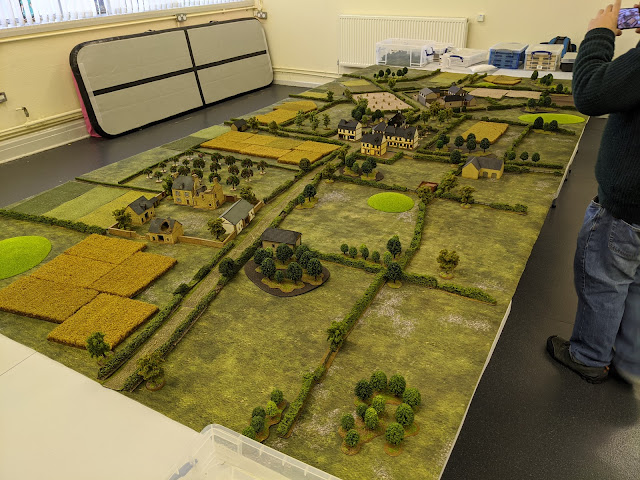 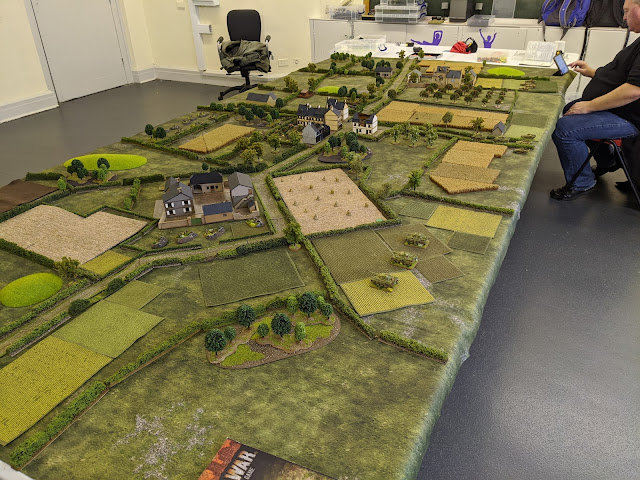 The table was more than 12' by 6', but we used the ends for holding paperwork, models and drinks. The setup wasn't of any particular place, but representative of the Eastern side of the allied landings (north of Caen). Lots of large crop fields and a few orchards and farmsteads.

The guys all played the Canadians for this game, and had an understrength infantry company with a section of 2 x 6-Pdr A/T guns, a platoon of 4 x Vickers HMG's and 2 of the support companies 3" Mortars. They were tasked with holding the crossroads in the centre, and decided to hold the crossroads and each of the farms in order to prevent flanking. One platoon went to each location and one was held behind the hamlet in reserve. They also had a battery of 14th Field Regiment Priests (theoretically) and the guns of HMS Belfast (again, theoretically). Representing history, these would be unavailable until later in the game, though they did not know this when they set up.

The Germans were attacking the crossroads, were unaware of the exact allied positions and in a hurry to counter attack the beaches. I was running a very simple system for the Germans. Each turn I would roll for reserves (odds/evens = yes/no), composition of reserves, location of entry along my table edge and reaction of the on table Germans to the situation (again, will they do x, yes/no).

I wanted the attackers to be particularly armour heavy, to represent some of the early armoured counter attacks which were unsupported by infantry or had limited infantry, and how useless these were against troops in built up areas and Norman farm complexes. I also wanted to get my newly painted Panthers and Panzer IV's on the table!


Panthers and some Panzergrens mounted in halftracks led the way. For this game we were using a simple 'what makes sense' system with regards to spotting. Units that had fired were visible (generally), or else on a successful skill check hidden units could be spotted (where we assume units are looking for the enemy). On the right, Dave's farm came under attack by a large platoon of mounted Panzergrens. These weathered a storm of Vickers .303 fire to unload close to the walls, while the troops inside assaulted into the building. A tense back and forth raged, before the attacking platoon was repulsed. The survivors took further casualties falling back over the field, before being picked up and whisked off to reorganise - and report the enemy's position.

In the centre, not much happened. The Panthers advanced to the crossroads but would not risk ambush from the buildings. The 251's took mortar fire which was ineffective, and smoke was fired at the lead Panther.

On the left, the panthers advanced cross country, encountering no enemy forces but being subject to a very heavy bombardment from HMS Belfast as the Naval OP had eventually fixed his radio (1 in 6 chance every turn).

Note: we play a bit fast and loose with the command rules and splitting of units. For the Canadian 6 Pdrs and Vickers, they effectively became part of the platoon to which they were attached, and had to be supported by infantry. I feel this better reflects how these support weapons were used.

There were a few minor moves from the Canadians, mainly shifting a 6-Pdr out of sight of the Panthers, and moving some Piat teams around to try and get flank shots on Panthers. Dave meanwhile re-jigged his defences to cover gaps caused by casualties.


As more Panzer IV's arrive in the centre, a platoon of StuGs turn up on the left, adding more pressure to Ian's flank. To help, a troop of two towed 17-Pdrs arrive, and were rushed over to Ian's flank to support the M10's.


It was around this time that 14th Field Regiment, RCA, finally got off the beaches and could lay down some fire. Immediately the SS infantry began to take a hammering - mainly those around Dave's farm who had been closing in on his dangerously depleted platoon. His troops had already fallen back further into the compound to avoid the fire from 5 Panzer IV's and the mortar bombardment of the previously occupied buildings (the Germans being unaware the troops had pegged it out the back door...).

Meanwhile, Ian's M10's work their way forward to get a shot. Unfortunately at this time the dice roll came up for the Panthers to move, and an M10 was lost. The other, returning fire, bailed a Panther. Thankfully the Canadians also received some tank support in the form of some Sherman DD's. These were shifted over to help Dave.


With a lack of infantry, the German armour began to push forward themselves. This is where the guys carefully marshaled (other than Martins...) A/T assets began to prove their worth. As the German tanks moved into more open ground, they were hit by fire from deployed guns.

No photo's, but in the centre another troop of three DD Shermans took out two Panzer IV's who had killed one of Martins infantry sections left in the woods. They pushed through the woods only to come face to face with the Shermans. An exchange of fire left both German tanks burning.


With no more German infantry in the offing and tank casualties mounting, the SS troops broke off and the battle ended. The Canadians held their objective (although there was a Panther parked on it for a while). A really good example of this being a period where the advantage lays with the defender, and how allied artillery is hugely effective against troops in the open advancing. For Dave especially just getting the pin on an advancing platoon was huge, and kept the pressure off his beleaguered platoon.

And that was it, another little dabble into the peculiarities of the Normandy campaign. I'm really looking forward to the British and SS books coming out for late war v4 in the next few months. I know I'll be left wanting more, but it will make these games a bit easier paperwork wise. Still really like the mechanics of the game, loved the look on the table (although as ever, it was set up in a hurry and is a portable set - more time to set the table would always be better and give a better finish). First time we did not run out of hedges, but more field material required to fill in some of the open spaces. The Hotz stuff is great for that, but I need some (bigger) area's of standing crops.

Orchard also needs based (I re-based these just before the game) and possibly needs extending as on a 12' by 6' I felt like I should have had a few.

As ever, mat provided by Dave, as were a lot of hedges. Models were mine aside from the German Halftracks, which were kindly loaned by Ian. Mine are still in the painting pile...

Next game set for the beginning of Feb, but no arrangements as to what. Possibly 10mm Fantasy - better get cracking on my painting.