On Friday the bits I had been waiting on from Skytrex arrived. So on Saturday I took advantage of some quiet time to do a little work on the current batch.

Firstly, here's what the £10 CD SP1 pack from Skytrex looks like:

The pictures show the quantity wise the Skytrex pack has a lot more bits - and a lot more bits for your £ (or €/$). Although the Peter Pig pack is for Shermans and has spare tracks and wheels/bogeys. The Skytrex CD SP1 pack has crates, Jerry Cans, bedding/canvas rolls of various sizes, camo netting rolls of various sizes and large and small barrels.

Skytrex also does a CD SP2 pack which is more aimed at Sherman stowage - containing bogeys, machine guns and spare tracks. The Skytrex CD SP1 pack is also excellent for helping detail normal vehicles and bases - I have a few plans for using those barrels on scenic bases.

So here we have the whole work in progress batch up to the point if needing primed and base coated.  The plastic Sherman Firefly also required putty to fill some of the gaps in the model.

I know it doesn't look much further on than the previous post, but the detailing takes me hours as I try to make each vehicle different and unique. I try and look at actual period examples and also make sure all the turrets can turn 360o and such. Things I would like are more crew personal items - helmets and the likes.

As I understand it the Plastic Soldier Company is working on a plastic 15mm British vehicle stowage pack - which I look forward to as the German mock ups look interesting:

I do like the look of their new 15mm 6 pounder A/T guns and Loyd Carriers. Especially as the Loyd Carriers have options for the canvas covers than no other manufacturers do in 15mm (pic is of the 20mm model).

While I didn't think about it at the time, I think I may have accidentally expended one of of my #6MMRPC Joker card purchases on these guys!

I picked up a pack of Peter Pig 15mm WW2 Brit Medics. These were to go along with the ones I had purchased from Skytrex earlier this year. These will form part of my Battlegroup Overlord medical group. I also ordered some of the Peter Pig generic WW2 dead. These will be part of the Aid Post as well.

So - as per requests previously, I took some pictures of these models compared to each other and compared to a Battlefront FoW mini.

In total the Peter Pig pack contained 8 mini's. My pack was broken down into 3 kneeling, 3 standing and 2 moving.

The Skytrex pack came with 2 stretchers and 4 stretcher bearers. One mini giving a firemans lift to a injured soldier. It also included 4 injured soldiers in 4 different poses. 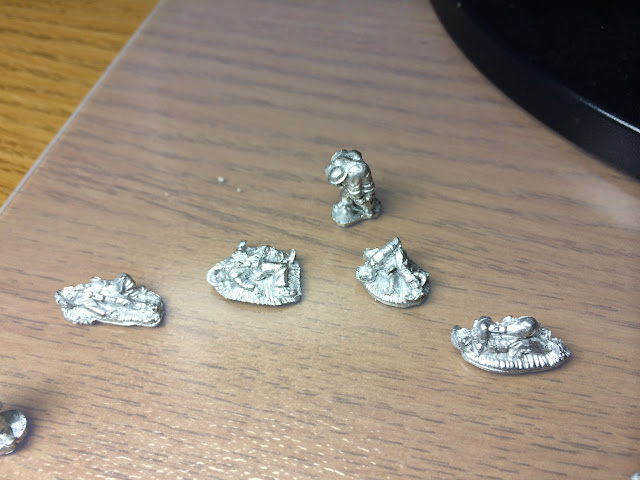 The injured soldiers have some decent poses and should be useful as well.

Scale wise, the Skytrex models seem a little smaller (as you can see from the stretcher bearer in the first pic). However, I mixed and matched a little:
As part of the purchase, I also picked up some Generic WW2 Dead from Peter Pig: 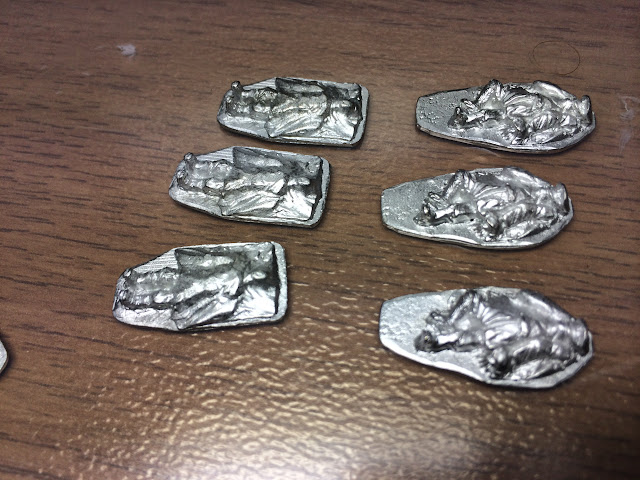 These are decent - though I'm not sure about the guy that has been blasted in half... 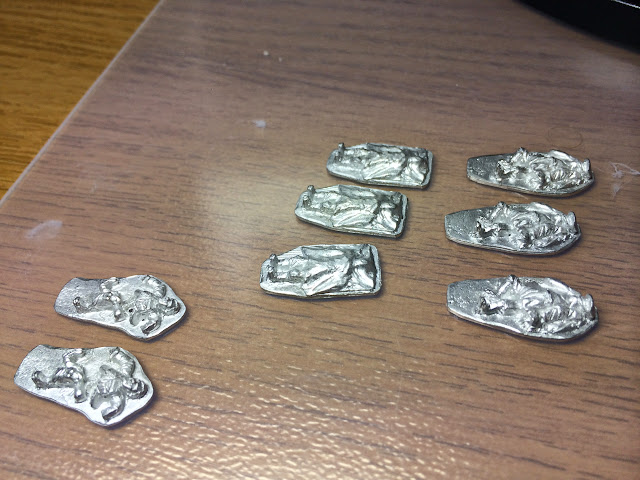 I also (the actual reason for my order) got a couple of packs of Peter Pigs Sherman Stowage. These are nice, but not as good value as the Skytrex packs. The selection of items is a little bit limited, although the casts are nice. 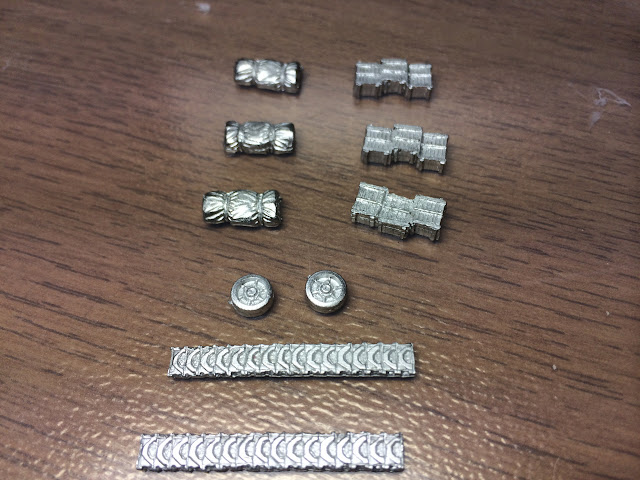 And just as a little add on: 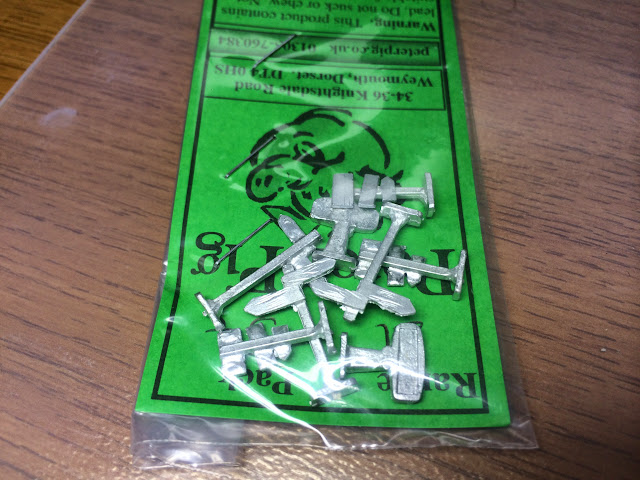 My second attempt at this update!

Since the house move two weeks ago (and for the week before that) I've done nothing towards moving my painting forward. Partly because everything was packed up and partly as I've no dedicated painting area now. The only likely space is the kitchen table - which isn't ideal as I like pottering about with my painting while A watches telly. Also, I use my computer to check details and find reference pics while painting - the computer being in a separate room.

Still, last week I took some time to dig out what I'd been working on before and try to move forward a little.

After spending quite a lot of time digging out the various tools from the various places they had ended up post move, I set about washing all the parts I had to assemble. 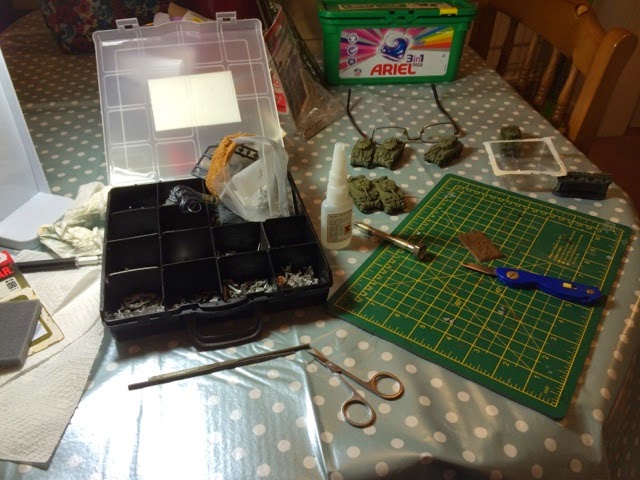 This included the D7, a couple of Fireflys and a Sherman I. Then I sorted out the turret hatches for the Shermans I had previously basecoated. This was a bit of a task as I had to work out how many I needed with open hatches (to be troop command tanks).

I also drilled out the barrels and muzzle breaks of the 17lb'ers of the Fireflys.

After everything was washed, I got it all put together: 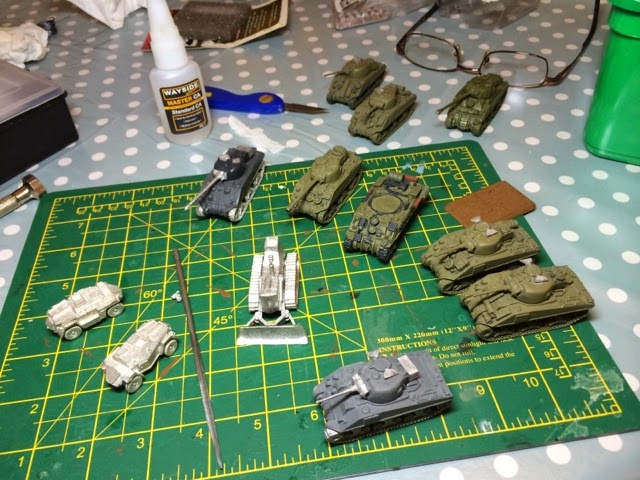 And set about detailing the models. To do this I started digging around my FoW bits box: 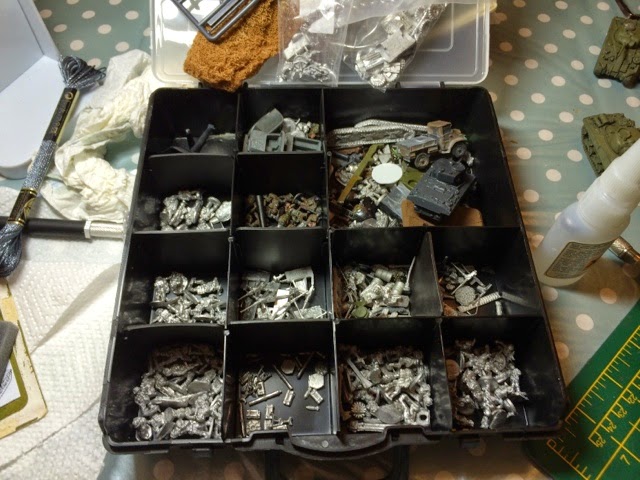 Alas! Disaster! I seem to have used most of the stowage I had got from Skytrex. I've none of the small tarp rolls. By this point it was late and while I could green stuff what I needed... that would have involved finding the green stuff. So I've ordered some new stowage (from Peter Pig this time). And put everything away till they arrive.

Plus points of this house is the small shed, which should help make spraying and varnishing less weather dependant (with the door open, of course!). A massive bonus in wintertime Scotland!
Posted by James MacCraggs at 19:04:00 11 comments: