Just a quickie for today. My AHPC 'water feature' round entry was a trio of resin DD Shermans, to go towards our upcoming D-Day games. 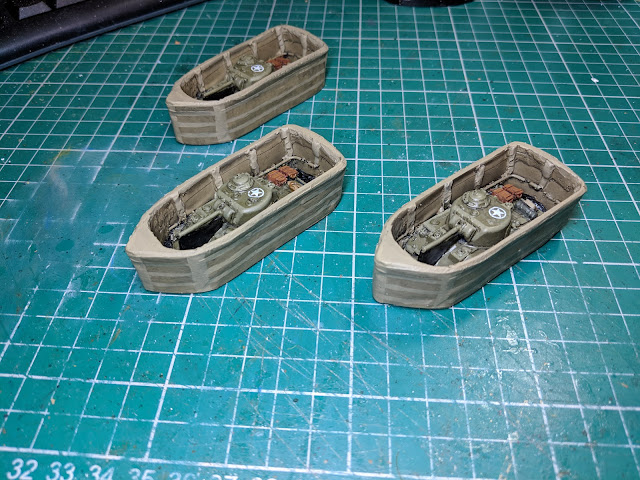 These were resin models from a ebay seller, and as such are not my usual Battlefront offerings. The models were pretty rough with lots of holes and flash. They also have a pretty odd turret hatch cupola which I don't think I've ever seen on Normandy Shermans.

These were given a quick paint job, and I'll consider whether to leave or replace them further down the line. As much as the BF offerings are nice, they are expensive for what is effectively a marker in the game. 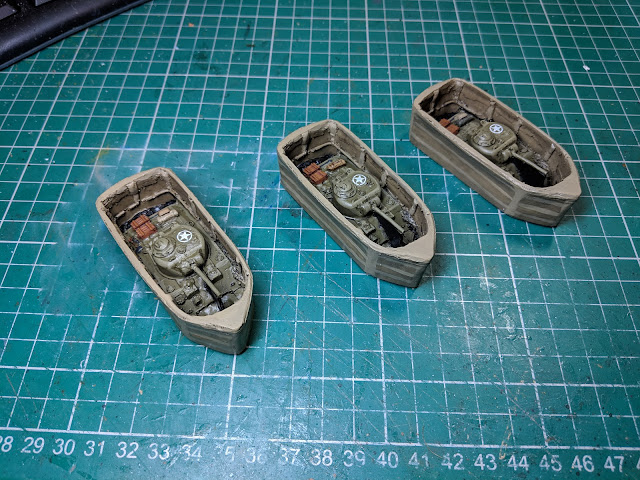 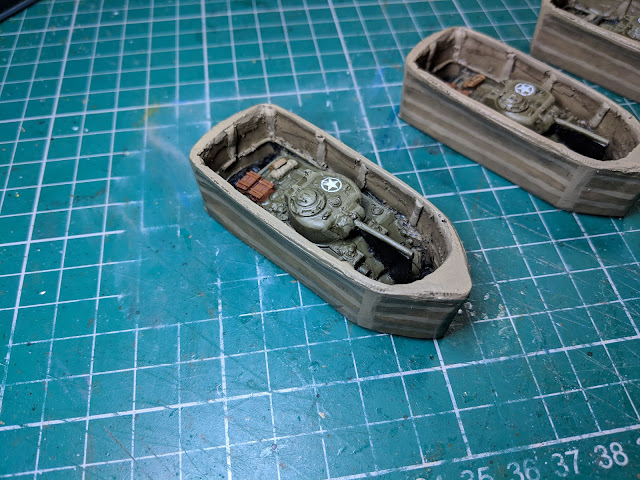 I would also point out that with all the DD tanks on the market, they sit too high in the water. As far as I'm aware, the canvas screen displaced enough water to keep the tank afloat, but the result was that there were only a few inches between the water surface and the top of the screen - hence the issues on D-day with choppy water causing the screens to collapse or coming over the top. The British apparently discovered prior to D-Day that screens needed re-enforcing with stronger steel, but didn't pass this info on to the Americans.

These three will be added to the collection, and will go towards some future beach landing.
Posted by James MacCraggs at 20:50:00 1 comment:

Following up from these being posted on the AHPC blog on Tuesday, I thought I'd had better show these off here as well. 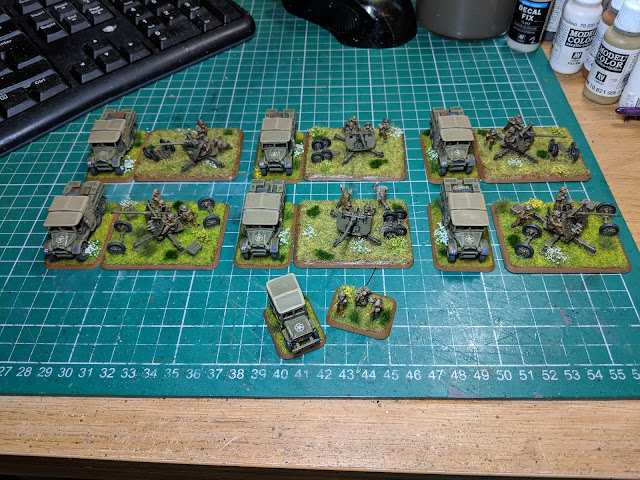 With the guns I'd finished a while ago (as can be told by the faded static grass), these trucks fill out my Anti-Aircraft Battery from the 40th Light Anti Aircraft Regiment, Royal Artillery.

I painted six in total, and they were pretty reasonable to do. I do like the mix of khaki and green. Again, I decided not to go with the mickey mouse style camo, and go with something a bit plainer. 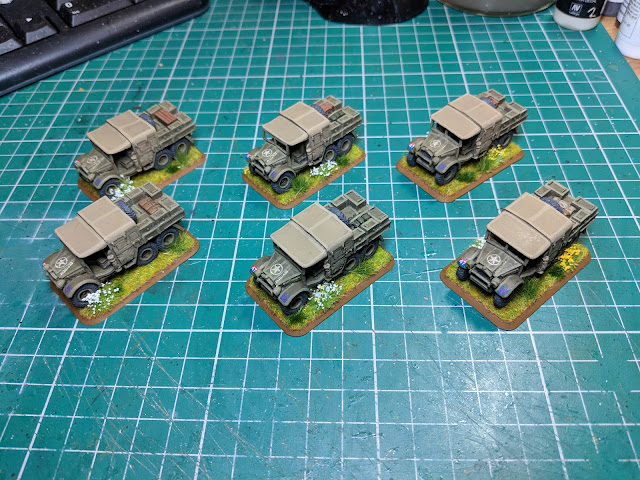 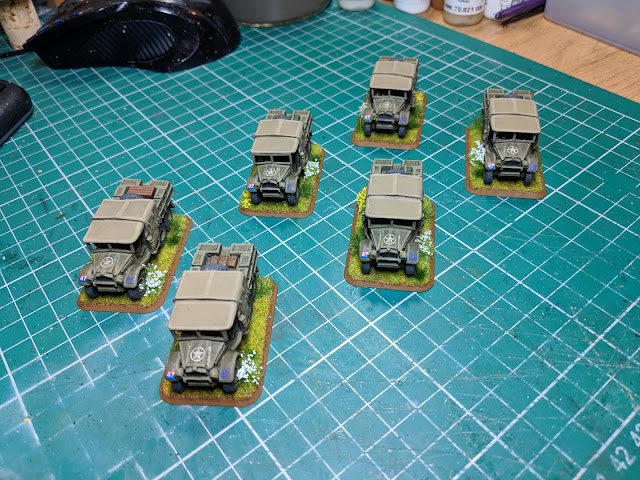 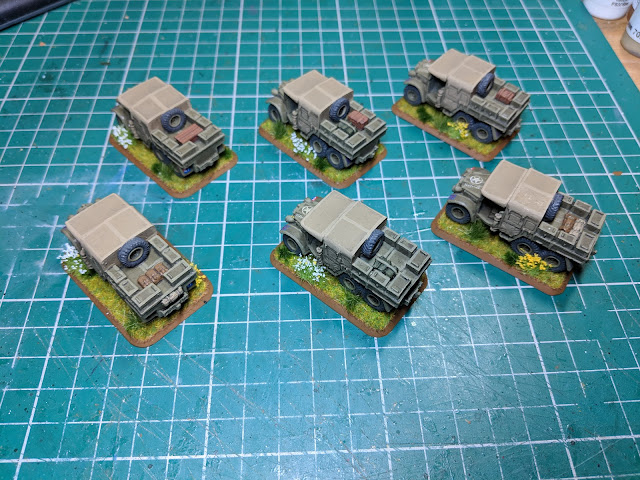 When I took the first batch of pictures of these for the challenge, I noticed I had used the wrong decals - somehow I'd picked up a British Armoured Division support sheet, and had marked the vehicles up with the AoS number for that (73 on blue over red), rather than the infantry divisions 47 on blue over red. I quickly corrected this, but still need to weather that decal.

Not too sure how much use these will see on the battlefield, but the completionist in me is happy that the full unit is now painted. 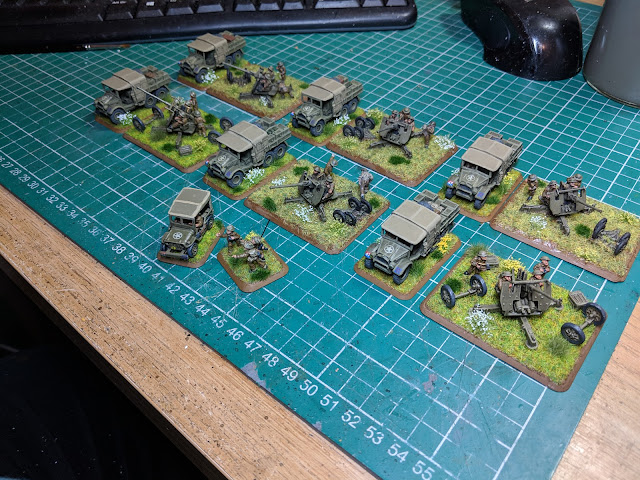 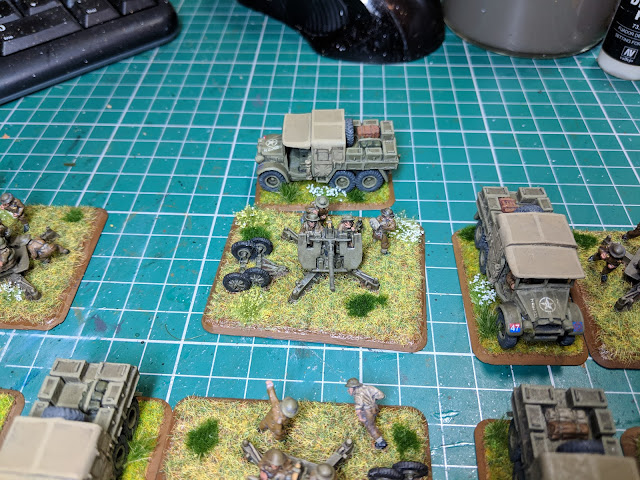 I'd also point out providing the transport for these guns is pretty expensive. I'm not sure Battlefront currently has these Morris trucks on their site (following a bit of a cull on what they are offering following the recent sale), but these kits were selling for £14 for a pack of two. Making these six trucks (at £42 for the unit) one of the most expensive units in the army when you take into account the cost of the guns. Suffice to say, I didn't pay that full amount, although it was still costly for something that might only see the table once in a blue moon.

Still, one more little part of the project done!

Another vehicle entry for the AHPC challenge! Only a single model for this last week, as prep for the game last Sunday and updating the 6 Pdr platoon (plus the NAAFI Truck) took up a lot of my time.

The NAAFI truck came 4th in the public voting for the 'Sport' round of the AHPC, so thanks to all who voted!

Anyway, for your perusal, a second D7 Bulldozer for my army: 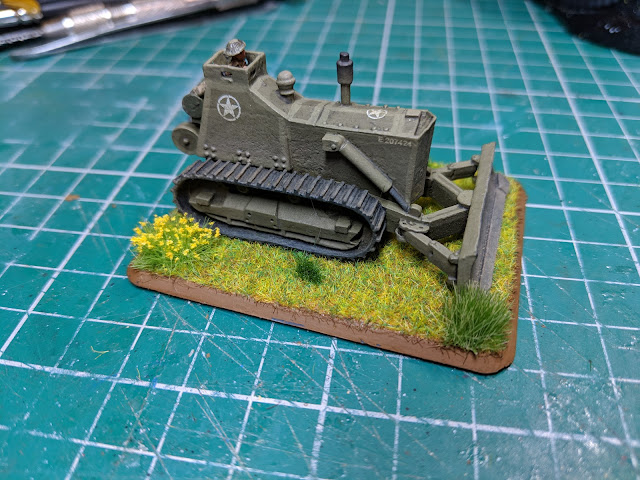 This is the second of these vehicles, both of which as 15mm models from Skytrex. Long time blog readers might remember I finished one a few years ago (July 2015). I referenced back at the time I purchased the first model that a Bulldozer had been mentioned in 144RAC's war diary for Operation Totalize:

"Major Lovibond had gone on a good way towards the objective, accompanied only by a very gallant bulldozer who had been told to follow the tank in front and was faithfully carrying out his orders."

At the time, I believed that this Bulldozer would have been from 79th Armoured Division (149th Assault Park Squadron Royal Engineers, to be precise, part of 1st Assault Brigade) and as my RE Breaching Group required a Bulldozer, I decalled it up as such.

Subsequent reading and research seems to indicate that the D7's in the column may have actually come from (in part) the Royal Engineers 239 Field Park Company, part of 51st Highland Division. However, while I have a definite mention of two such Bulldozers being in the 144RAC Column, I don't think that the 51st HD had enough D7's to allocate this many per British column (they would have needed 6, assuming each column was the same - it seems that the Field Park Squadron's only had 3, according to the TOE I have seen).

Anyway, despite no current information confirming my guess, I decided I should have a HD marked D7. I like the model and it's already found a use on the table, helping construct a crossing point of the railway embankment in the last game. It also gives me the two I need for my column. 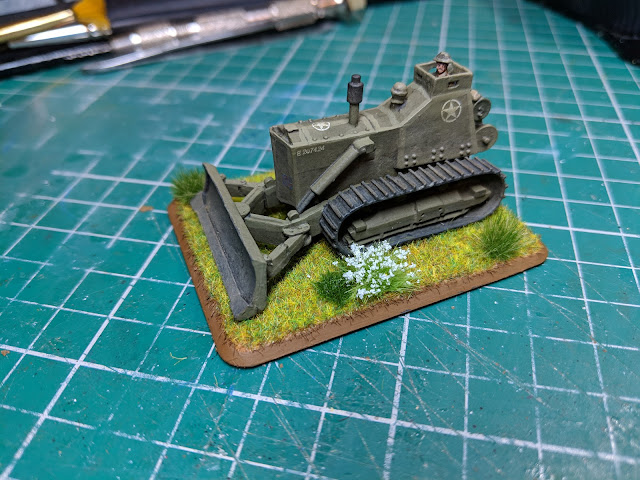 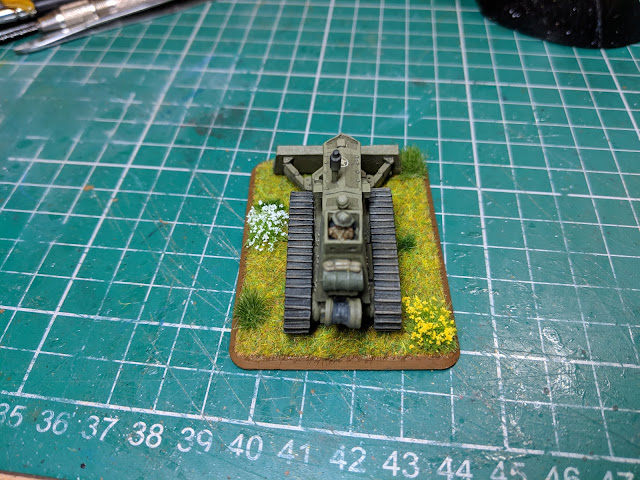 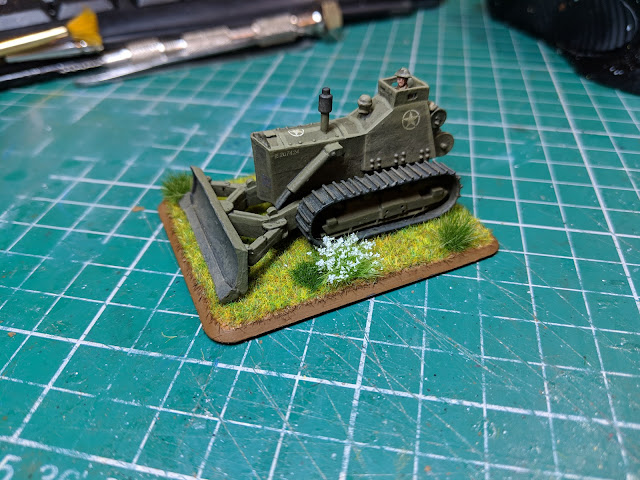 I added some stowage to the rear area, marked up with the usual recognition stars and edge highlighted with a light dusting of weathering powders. I also had dug out my original model for comparison, and realised just how much lighted my current painting style is. As a result, the old model also got some highlighting: 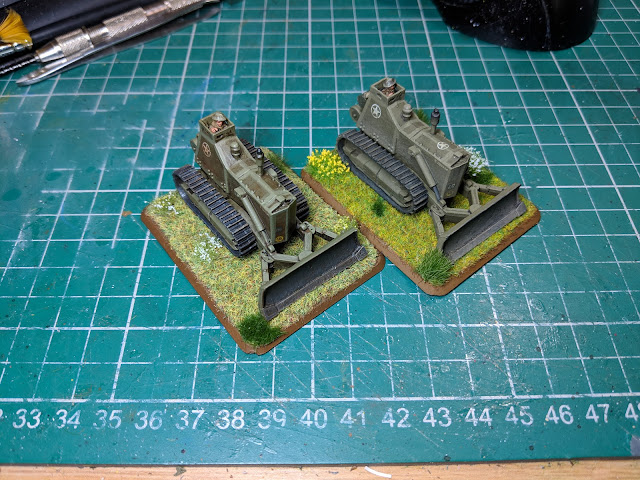 Nice big simple kit to put together, easy enough to paint! This model netted me 10 points for the challenge.
Posted by James MacCraggs at 15:40:00 8 comments: