Very slow on the blogging front of late, mainly due to lack of any painting or other work. However, last week I decided to re-focus my lack of painting mojo at the moment and do something constructive with my time.

Since I've managed to get Dave D and Martin into the whole Normandy FoW thing, Dave in his usual style jumped in with both feet and broadened the scope... He picked up some DD Shermans and some landing craft for his Yanks, and has been doing some coastal defences as well. Doing the landings is always something that's interested me, but was something of a future project - possible tied in with my distant idea to do the Rhine crossing (Operation Plunder). However, Dave's enthusiasm was infectious, and while on holidays I thought how cool it would be to do a 'proper' landing battle - not just with dribs and drabs of stuff, but have the whole thing be properly busy. There was also an idea for possibly doing a convention game at some point. I thought a big landing craft would look properly cool, but no one seems to make 15mm scale LST's (Landing Ship, Tanks).

Having seen the work the Mark has done over at House of Hengist, I spoke to him about scratch building a LST and he gave me some pointers. Last Saturday I took myself to Hobbycraft in Teeside Park with a bare bones idea, and came back with an expensive load of balsa wood.

As of today, this is what I've gotten done: 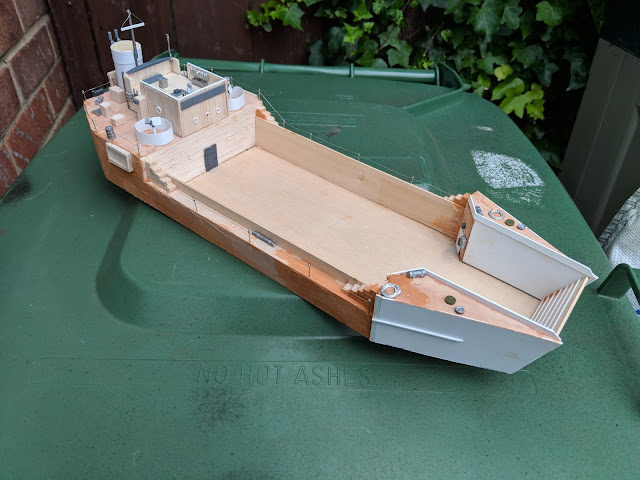 Now, let me say that this is a bit of a 'gaming token' as far as LST's are concerned. It's no specific mark or model, more a composite of a couple of different designs adapted to fit my based tanks and vehicles designed to look like an LST. So while I've tried to keep it to an LST style, it's not going to win any awards for accuracy when it comes to model boat building. I did the sizes by eye and the rough shape from looking at pictures online. I know that might offend some people, but to highlight this is the first scratch build I've ever done, and the first model I've ever built using wood and plasticard!

To give an idea of scale, here it is with a Battlefront LCA (Landing Craft, Assault) in the hold: 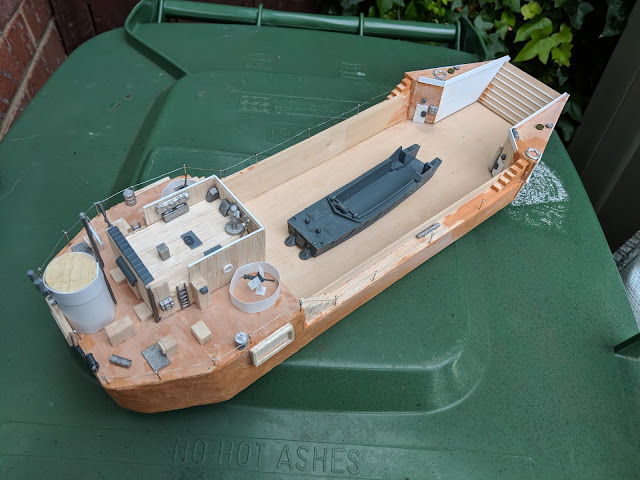 And here it is with a selection of my tanks: 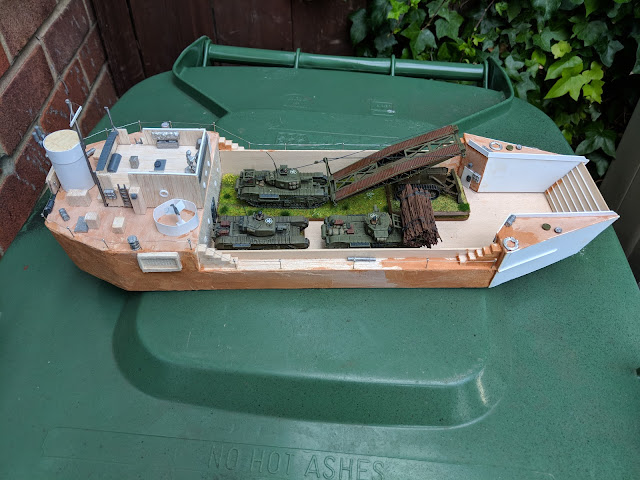 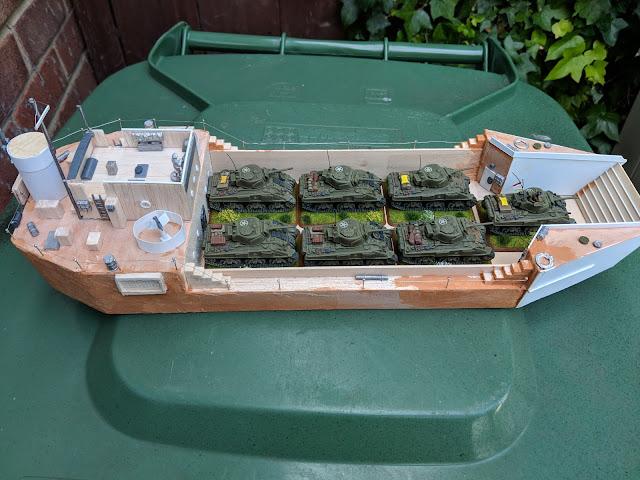 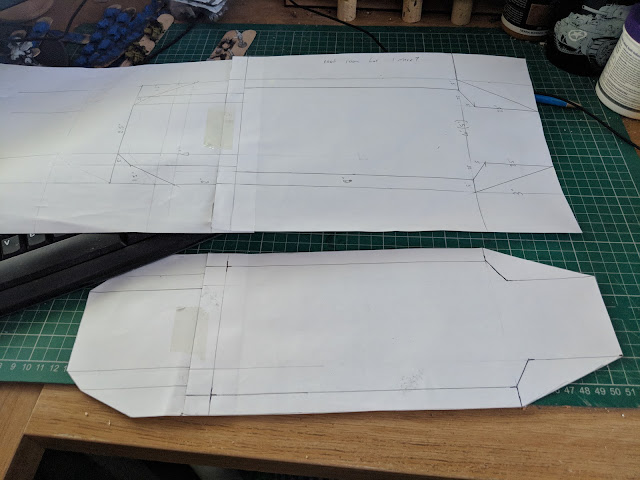 Which, with some building experience, I would alter slightly before trying again! I then cut out the base and built up the shapes I needed: 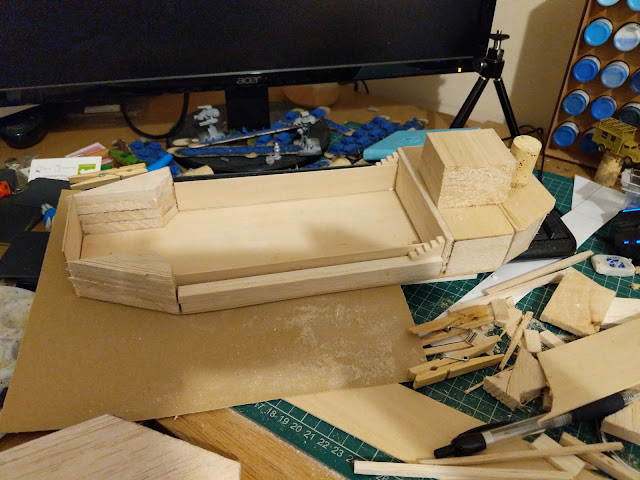 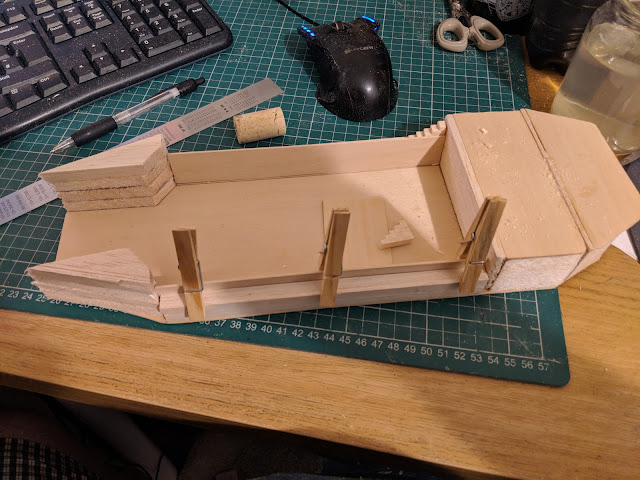 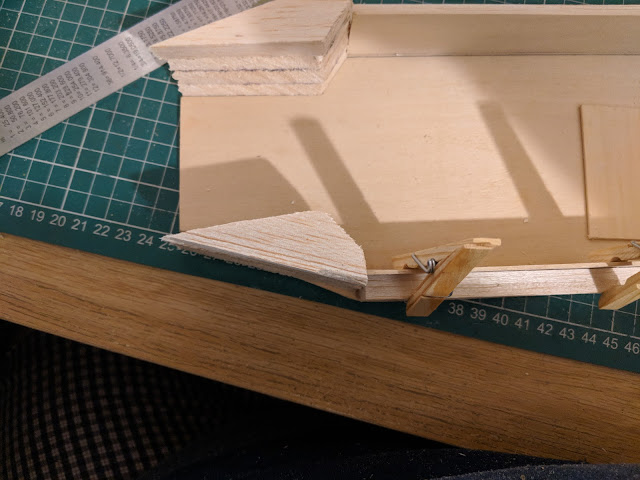 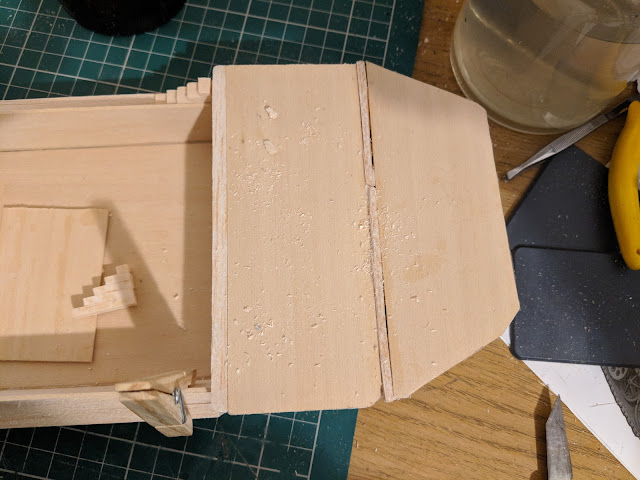 Before using some wood filler to cover up my poor woodworking skills: 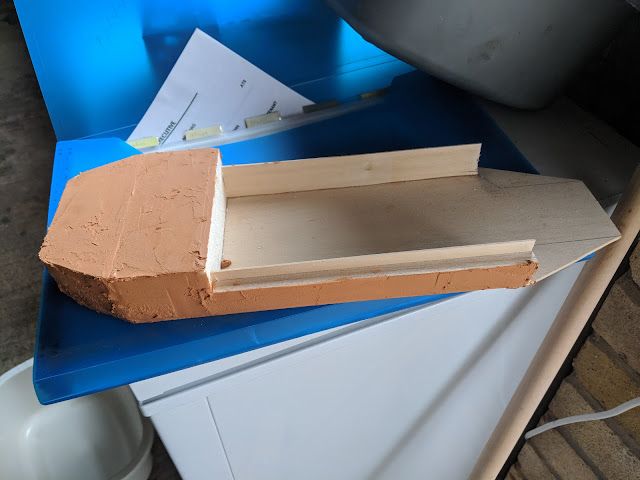 Once this was sanded down, I started on the detailing: 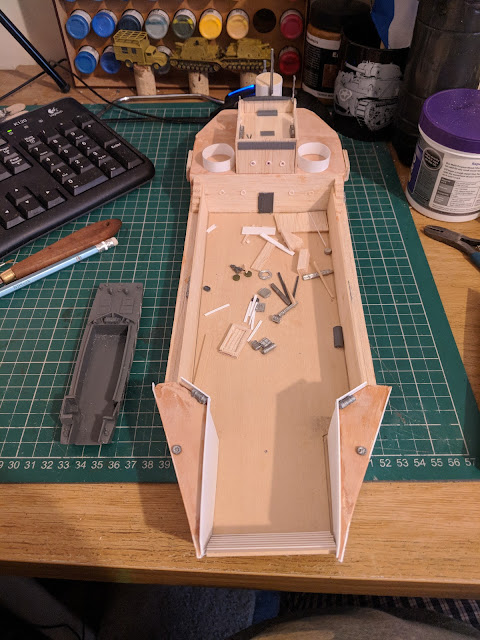 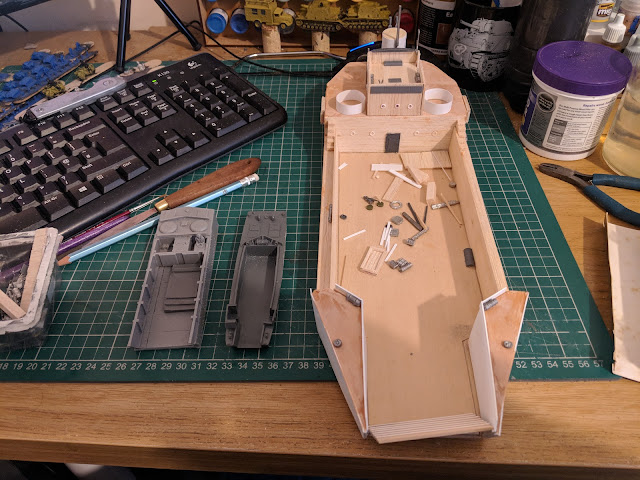 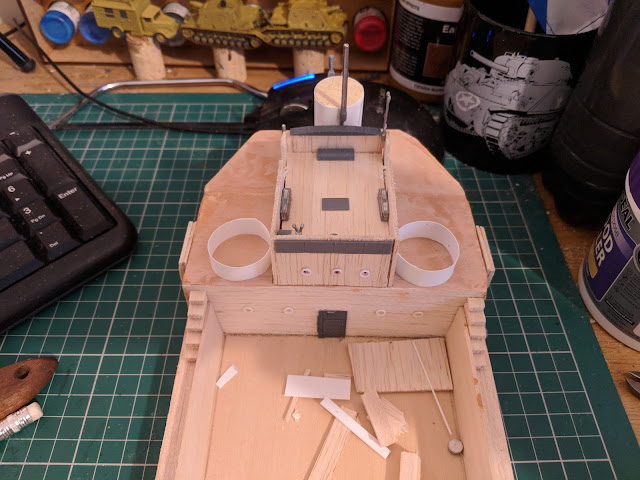 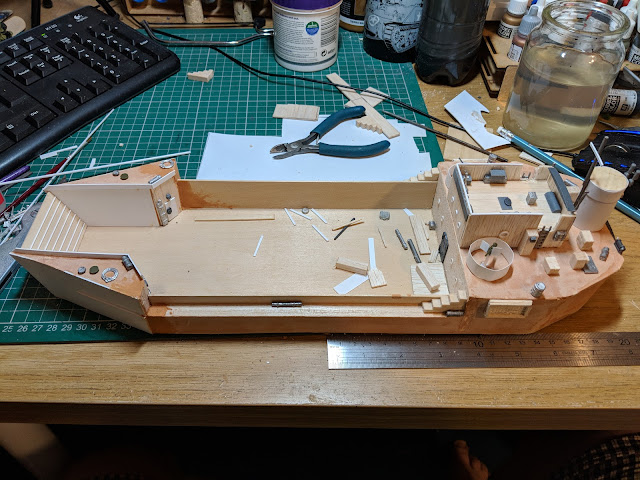 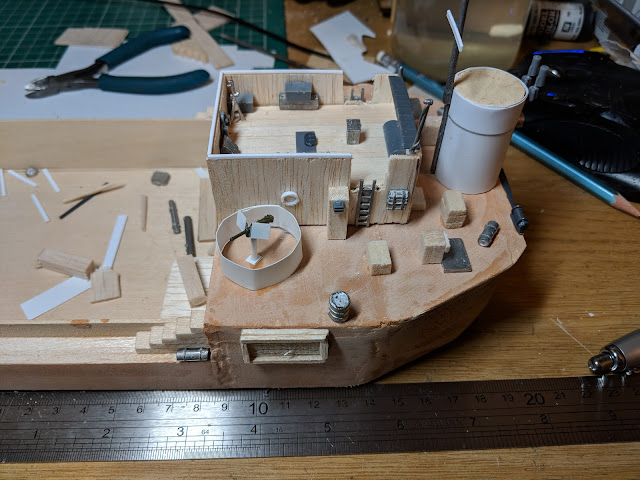 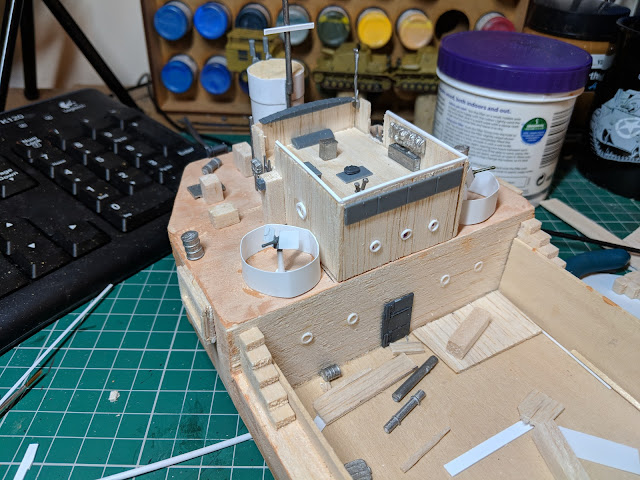 Which eventually lead me to the idea of doing the railings... we'll see how long these survive for! 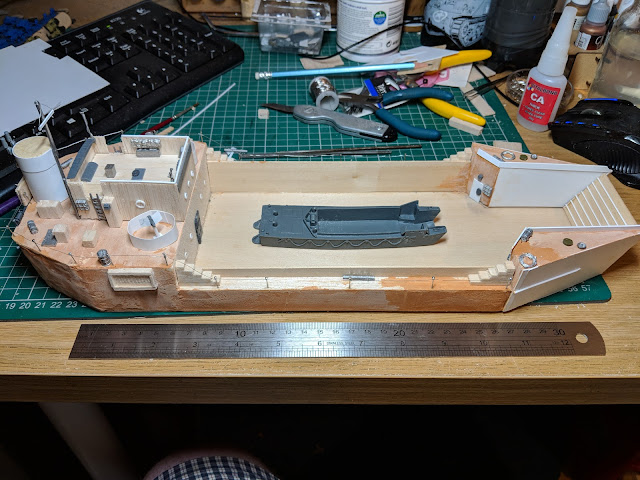 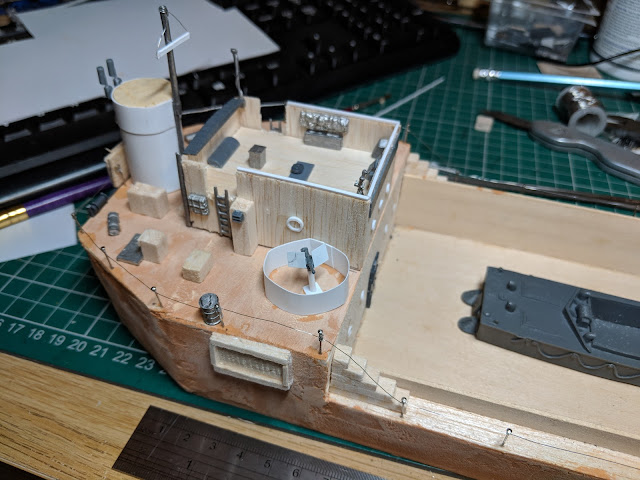 And finally, with a bit more filler to smooth out some of the rougher areas, we have today's model ready for a coat of PVA and some spray paint: 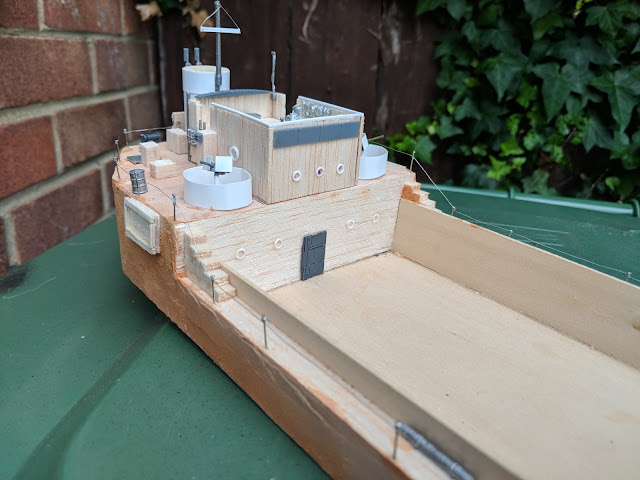 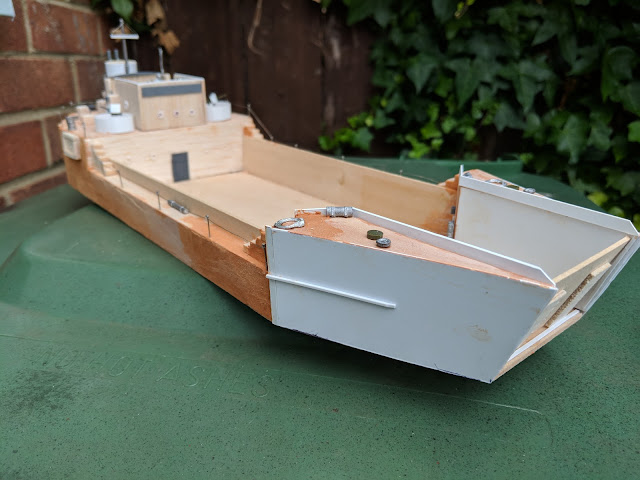 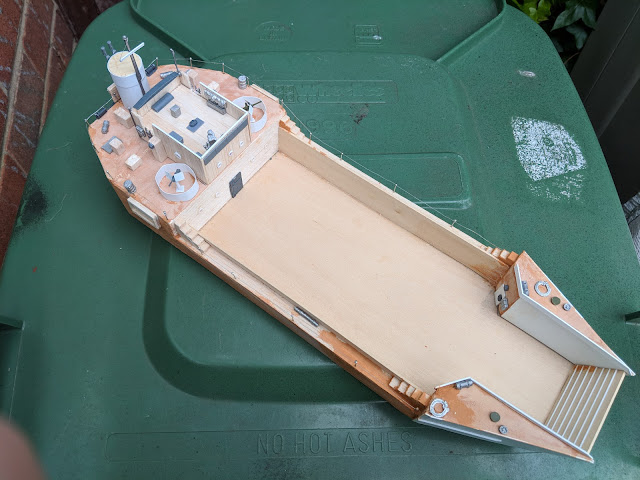 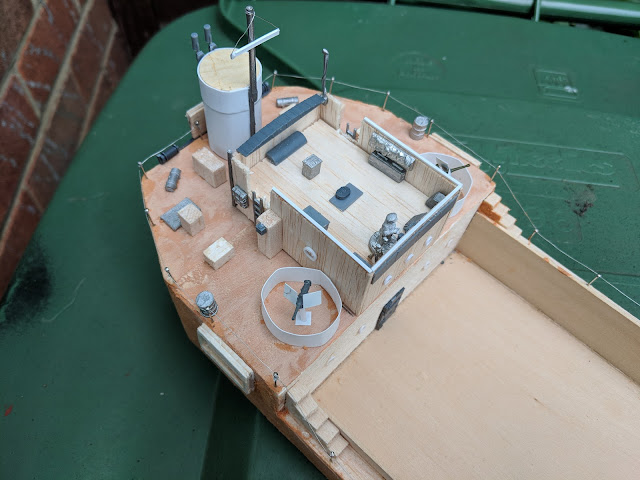 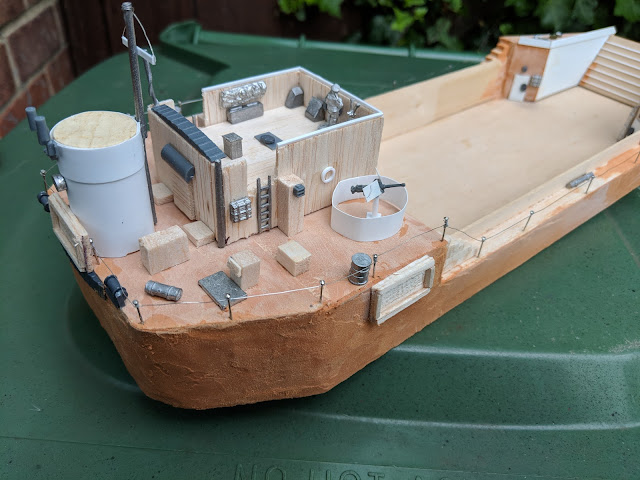 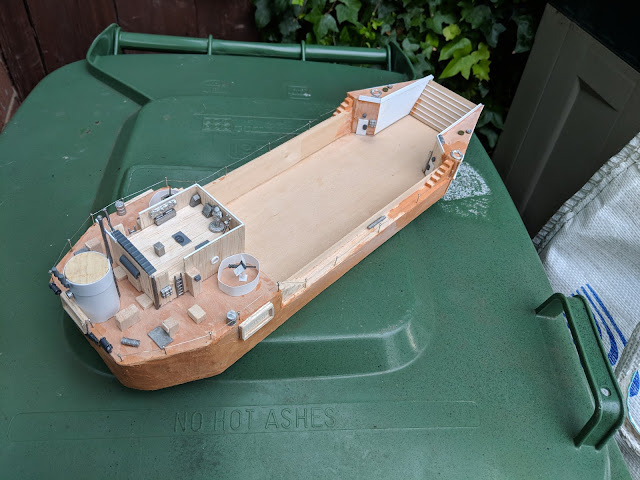 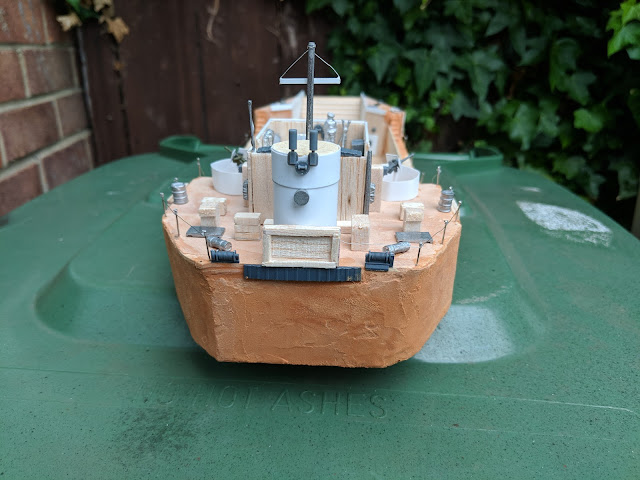 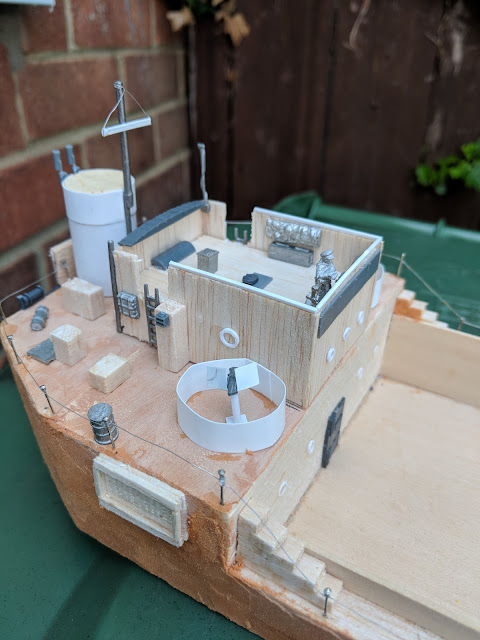 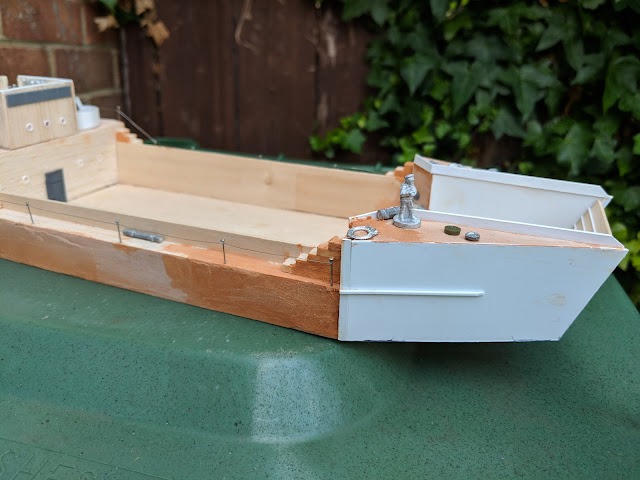 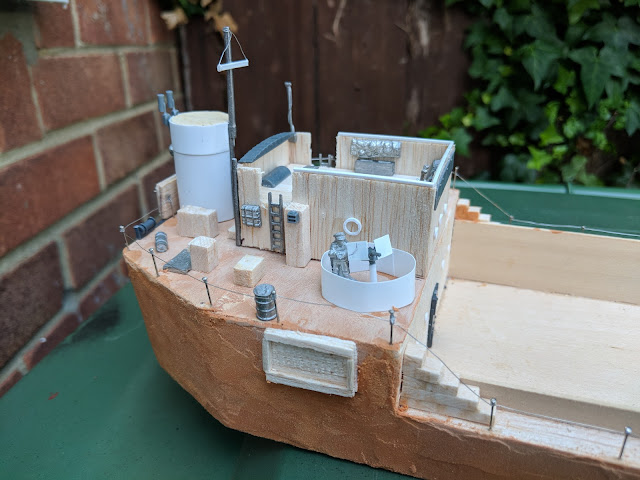 I used all sorts of bits from my bits box to add some details, such at the ladders and such. I had nothing to try and represent the 20mm guns with, so I picked some of my larger plastic .50's, added a German half track gun shield and build up with plasticard. Various other spares went into the model, including tank exhausts, pioneer bridges, Cromwell deep wading exhausts and panther rear hull sections. The railing is pins and beading wire, the smoke stack is a cork wrapped in plasticard. The mast is various gun barrels...

At the moment, I don't know that I'm going to do much more modelling wise. A coat of watered down PVA needs applying to harden up the wood and prevent the paint being sucked in. I also want to look at converting a couple of crew figures, but I will see how I do with that!
Posted by James MacCraggs at 20:20:00 13 comments:

I've just finished watching the live stream of the Flames of War/TY discussion from Saturday's Battlefront Open day, and thought it might be worth putting down some of what was discussed.

- Next two books, due August 25th 2018 are for the Eastern Front, 'Iron Cross' and 'Enemy at the Gates'
- These cover the Stalingrad battles
- 36 Plastic kits in the range, plastic Nebelwerfers were specifically mentioned, almost entire Russian range is in plastic
- Panzergrenadiers are included, but will not have half tracks in the book, there will be a web article to use half tracks, but a proper half track mounted army list will not be available until the 3rd Eastern Front book (Kursk).
- They are working on a plastic German Half track 251/1C model
- Plastic kits will include as many variants as possible, for example the KV-1 kit includes options for Flame tank and 85mm version
- Eastern Front being split into various books, with the Kursk book being after the first two
- Romanians and Hungarians being available as digital lists along with 'hopefully others', no dates given.
- Command Cards for Russians include blocking detachment (can shoot up a friendly unit, giving a bonus to motivation depending on number of hits, forcing pinned units forward), NKVD, Militgia, Naval Infantry, Cossacks, Unstoppable (KV-1's can still shoot when bailed) and Unkillable (KV-1's force re-rolls of German last stand tests within a radius).
- Commissars, if present, make units use better stats, if absent the unit reverts to worse stats.

Work also done on how Russian tank formations work, no real specifics given.

- Plastic unpainted 'city ruins' which are modular and can be combined into large structures, detailed inside and out, includes roof bits, can be made into various shapes
- resin painted factories and red brick house chimney stacks
- Gaming mat, one side city fighting and one side Kursk terrain

- Getting the 'Osprey treatement'
- New book coming early 2019
- Will include Belgians, Cavalry, Armoured Cars, more options for Brits and Germans and 'a few other bits and pieces'

- Using Osprey to stop 'other periods' from going defunct
- Mentioned Vietnam, Arab Israeli and Great War specifically
- Later mentioned that FoW 'Early' WW2 may be done by Osprey for retail reasons (not a period widely supported or played and not something retailers are generally willing to stock as it does not sell).
- also mentioned 'possibly other in the future' but this may have been a reference to the 'early' WW2 stuff.

- Covering the wars in the middle east during the 80's, including the Iran Iraq war
- mentioned plastic Israeli Merkavas
- Interesting period as many nations had a mix of American, Soviet and UK equipment.
- My impression was that these books were covering the Middle East generally but that they would fit in with Team Yankee. While the more modern equipment was talked about at the same time, I don't think it will necessarily be included in this book.

- New version due out in October 2019 fully bringing TY in line with V4
- When the next army books are done for the Brits, Yanks and Soviets the 'next generation' equipment will be included, including M1A1's, Bradlys, Apaches, T-80's, BMP3's, Challengers and Warriors. MRL's were also mentioned.
- Czech and Pole books due out October 18, two separate 24 page books due to the inclusion of unit cards for each force. Will include T-62's, RM70's, OT64's and Dana's.
- These two books will also give options for Soviet use of the T-62's, from what I understood.
- T-80 with reactive armour due to go into design 'soon'
- Future Soviet book would unfortunately replace 'Red Thunder' and become a compilation of sorts, but would include more 'modern' kit such as the T-80
- New British book also due out October 19
- Discussion being had in studio regarding 'infantry and towed weapons' such as mortars and artillery, and options for inclusion. These were left out initially in order to get armies out quickly.

- The Breakthrough Assault lads reported that the v4 '100pt' books for late war will be out on the 6 June 2019
- First late war 100pt book due out if Normandy
- The BA guys reported that the plan is to produce 2 to 3 campaign books per year and that the late war stuff will be pointed or referenced against a tiered system to represent 'early late', 'mid late' and 'late late' to help balance the late war period out.
- Initial book (before Normandy release) will be for a German Para book covering mid and late war. This book will have '100pt' lists for mid and late war, and cards for 1500pt late war... meaning that it is compatible with mid war, 100pt late war and 1500pt late war lists. An American Para book was also mentioned, but I wasn't clear as to timing of this - it may be the same time as the German book?
- British para book will apparently be later, after Normandy
- New 'Open Fire' style box will come out with v4 Late War (June 2019?)

- Brief mention of a 'modern' tanks game, using the TY models
- Talk about BF's regret over the launch of v4. No issues with the rules - BF are happy with the way the game plays and maintain that a change was needed as v3 had grown into a monster, but big lessons learnt about the release method, the initial contents of the release (lack of army options), communications, etc. Insisted that lessons had been learnt.
- The feed quality, via Facebook live, was pretty poor, so no images of the slides, although there are some around Facebook and I'm sure other sites will publish stuff in due course.

That's all I've picked up from the live feed and from a quick check on Facebook for what else is being reported.
Posted by James MacCraggs at 01:29:00 2 comments: