Having just returned from a wonderful weekend spent touring various parts of Yorkshire with my girl (attending a wedding and dinner with my dad along the way - then getting stuck in Teeside due to a little bit of bad weather somewhere down south and no trains running) I found a wonderful little suprise awaiting me.

Dai, over at The Lost and the Damned and the Stunted has sent me some spare PIAT gunners and loaders for my Universal Carrier PIAT units. These will make an excellent addition to the models and I will be getting the UC's done shortly to show them off.

In exchange, I'm sending some of my spare Surrendering Germans - just as soon as I get myself organized (and search down the back of the sofa for postage!). Hopefully this weekend.

Another example of how friendly and helpful people in this hobby can be. A great wee trade and happily received, Thanks Dai!

Todays trip to the Carluke and Law Wargames club saw me playing the Tyranids in a game of 5th Edition Warhammer 40k. 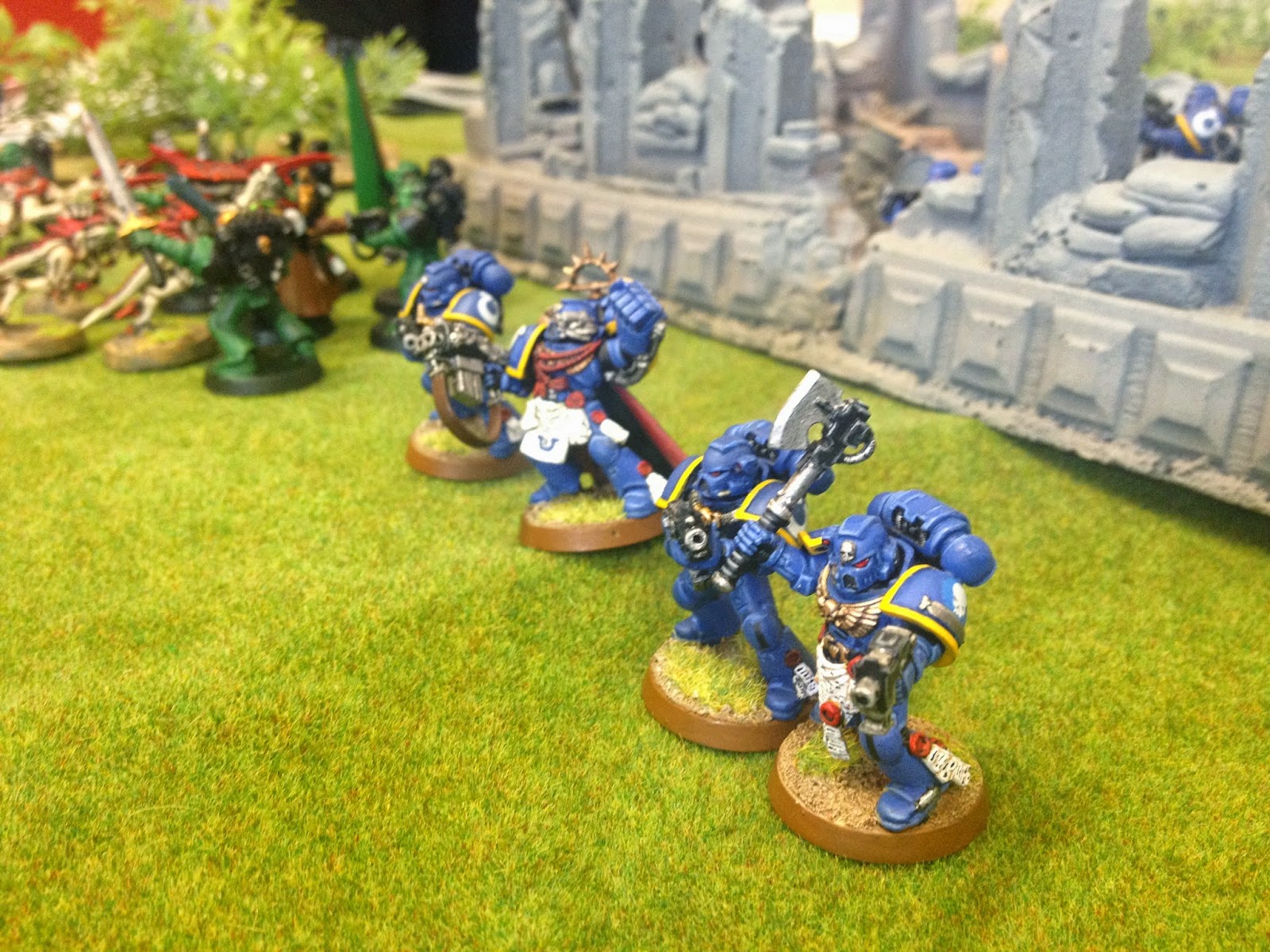 It was a good laugh, and nice to play something that has a single mindedness (Forward!). We decided my objective was to kill as many Space Marines as possible while the Marines had to kill my synapse creatures. My units of small creatures (gaunts) would respawn from my table edge when a whole unit of them was lost. The Marines started with some units on the table and the rest deep striking in (having drawn the nids into a trap).

The game ended with a good few marines and nids dead. We all agreed it was a fun game, even without using points and proper objectives. 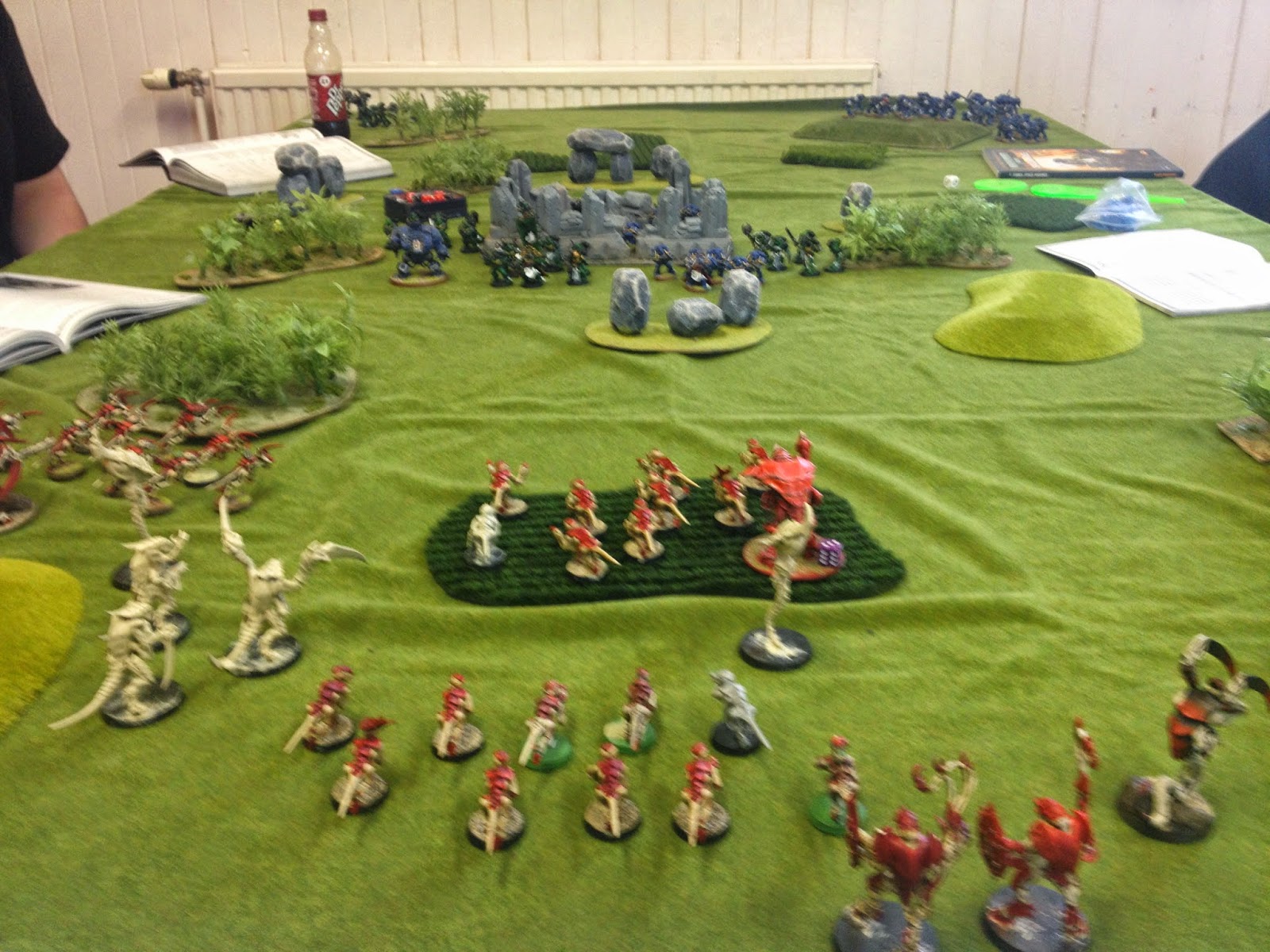 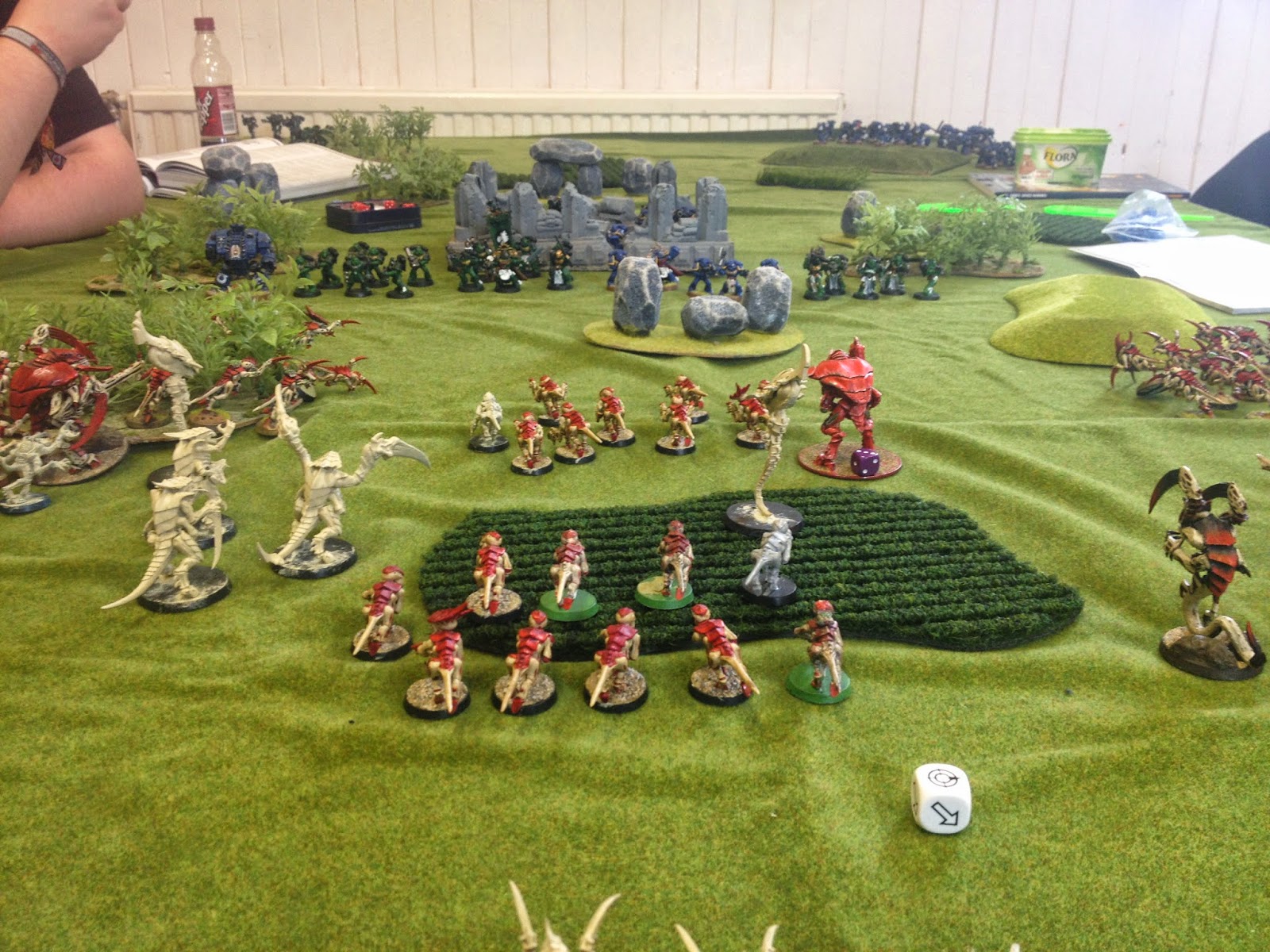 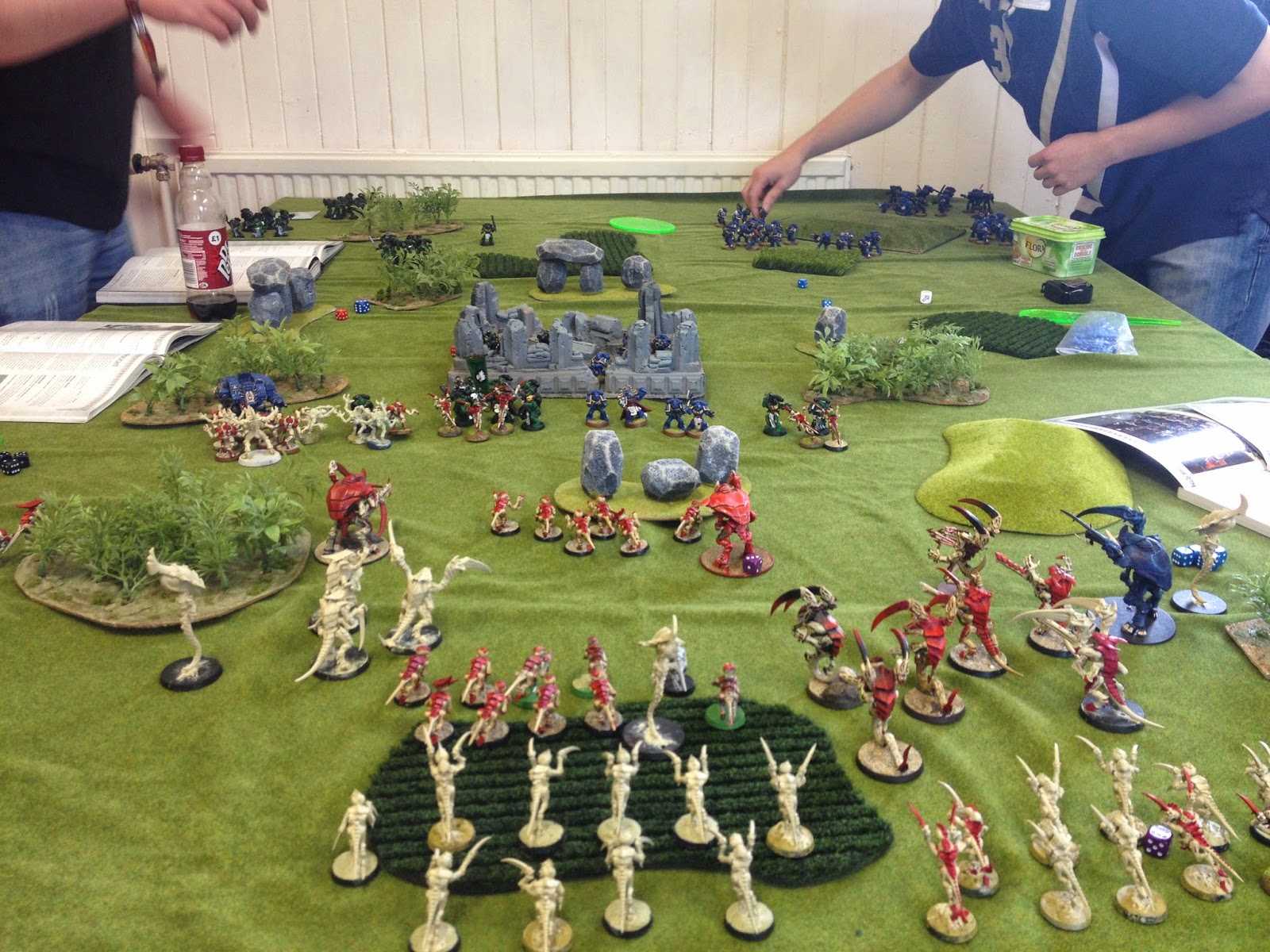 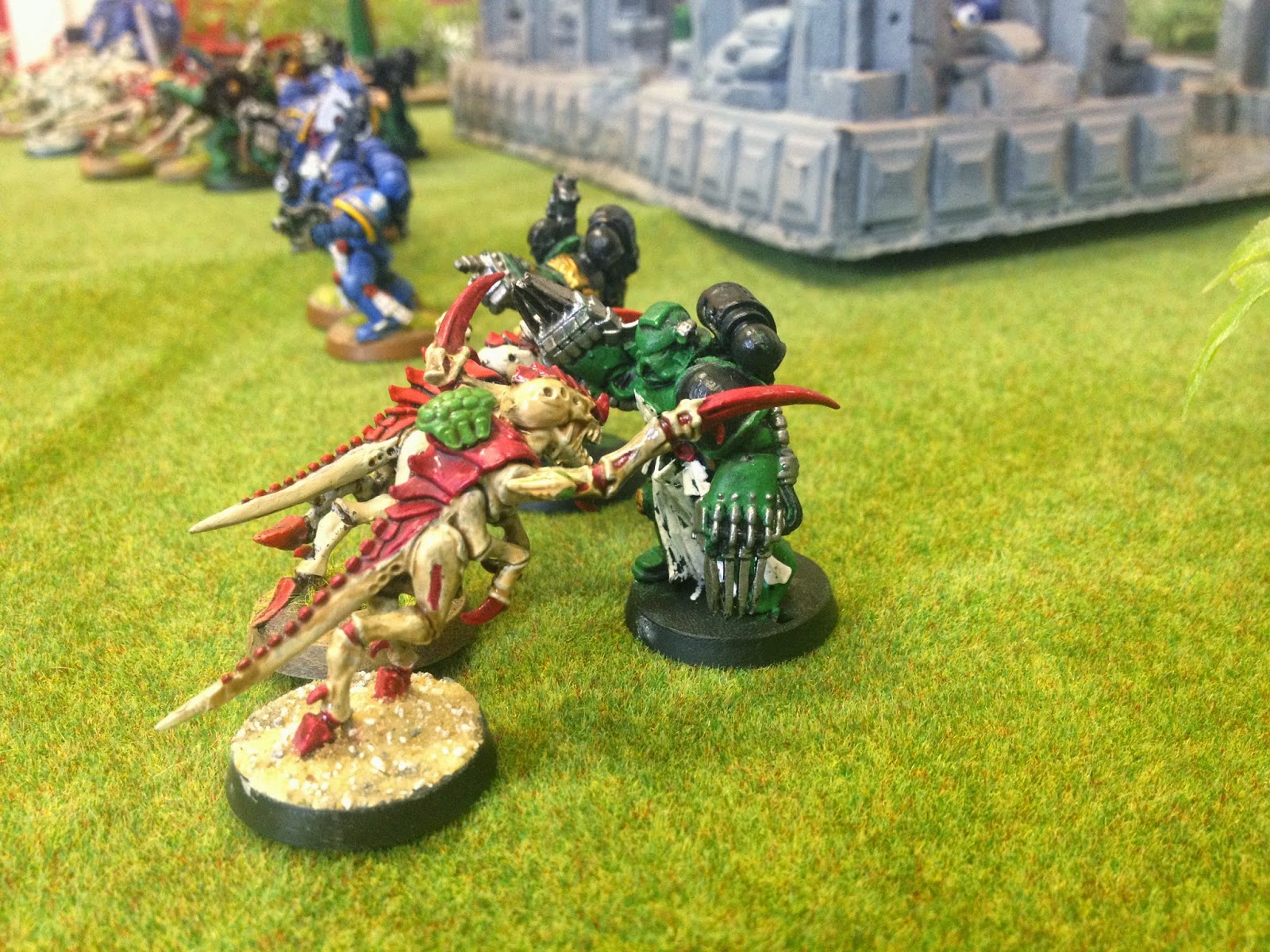 Another quick update on my ongoing work on the Flail, specifically the section along the front boom.

I had previously painted the drum and chains black, so my first step was to tear up some of the foam used in the FoW blisters, dip one of the torn parts in black and dab along the front of the boom arms (where debris and explosions would damage the paint). I then repeated this with Russian Uniform Green (Vallejo Model Color 70924) over the drum and chains - making sure the black on the booms was also nice and patchy.

This gave a suitably mottled appearance - the sections I couldn't get with the sponge I used a brush on, which also worked fine.

I then repeated the process with a small amount of Hull Red (Vallejo Model Color 70985) over the bottom of the boom arms and lightly over the chains.

Next up came some Model Air Metallic Black (Vallejo 71073) which I had picked up by accident years ago. Then some Game Color Gunmetal Metal (Vallejo 72054). All applied using the sponge method. 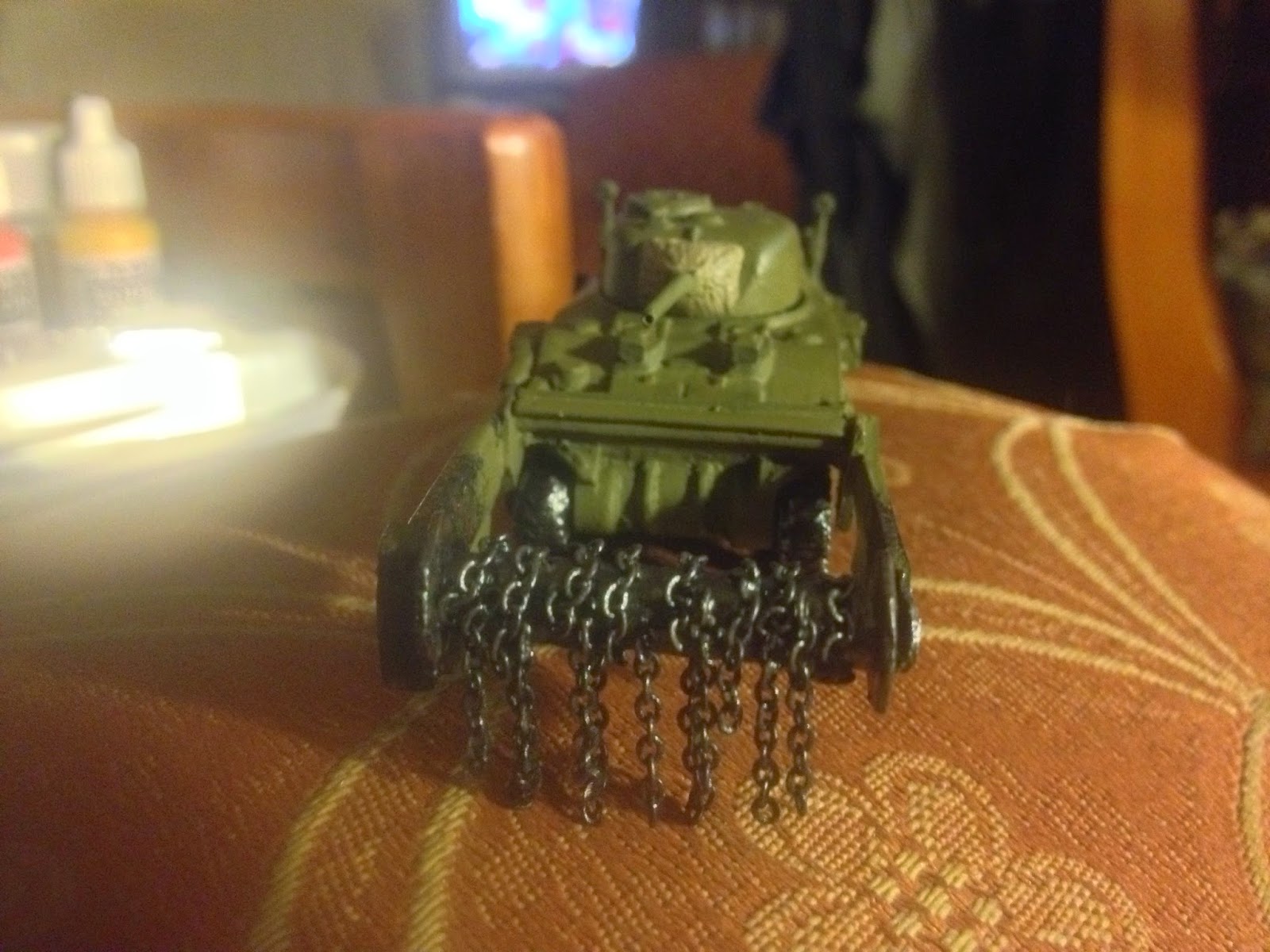 This is pre any washes, army painter or highlights.
Posted by James MacCraggs at 21:12:00 2 comments:

I've been a bit quiet blogging wise of late as I had hit a bit of a wall painting wise and had a visitor last week and a visit to my son last weekend. This week I decided to try and get rolling again, so picked up where I left off with my flail tanks.

These have been a bit challenging so far as I've fretted a lot over how to paint the drum and chains. I've spent a good bit of time trying to find colour pics, but nothing has come up other than other modellers tanks. This has had me dithering a bit as I have had to decide what I want to do with my own models.

One thing that has become obvious is that this tank (the Sherman Crab II) had some form of rear turret bin. While the rear hull bin came with the model, neither of the kits I got from Battlefront had anything for the turret.

I was just going to leave this, but had a spare section of metal sprue handy, so snipped it to shape and fitted it on. 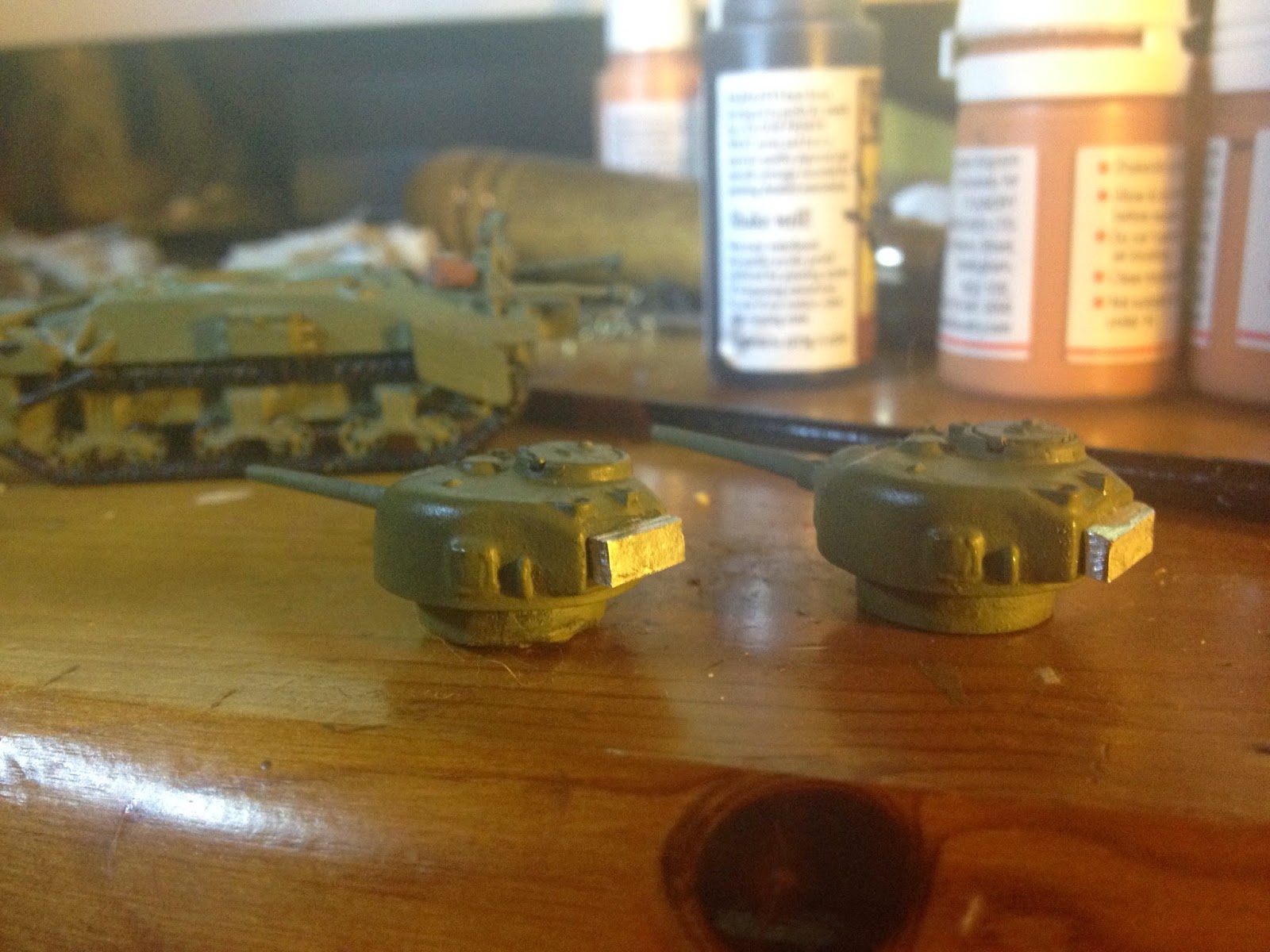 As for the drum and chains (sounds like a band!) I decided that even if it had been painted, regular exposure to exploding mines and the action of the chains and dust on the metal would wear any paint away. I've gone for a coat of black and I will try some light metal colour and see how it looks from there... 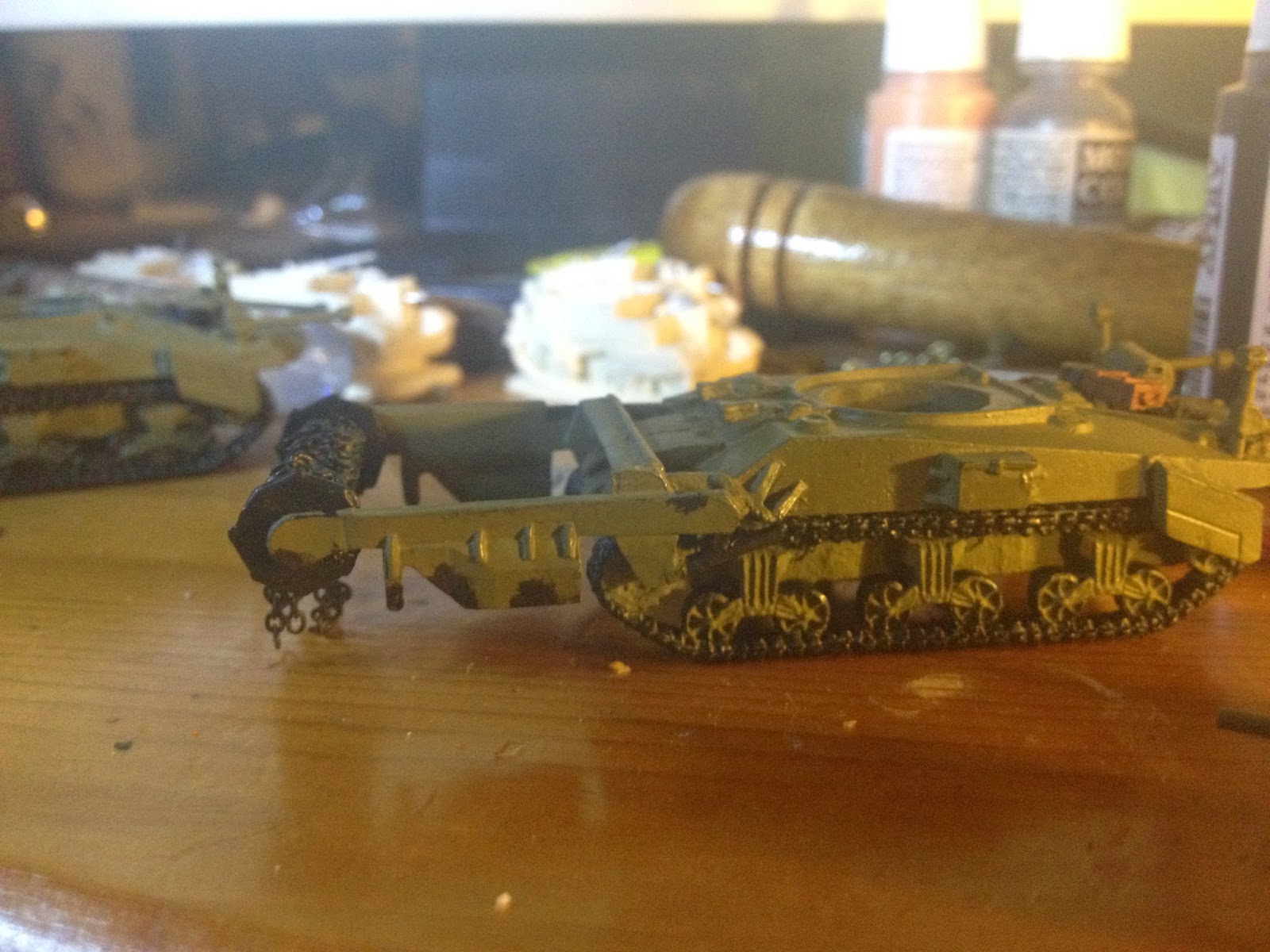 Still got the track details to do and then a quick tidy of the models. The one in the picture above had suffered an altitude related accident (if fell off the table) and needed repaired - resulting in some metal showing through. The black patches are just a base before I repaint Russian Uniform green.

A quick wee post to expand on my earlier comments about Knightly Gaming in Lanark. The shop has a good few tables and has a wargaming night on a Thursday from 5pm. I also attend the roleplay game night on Mondays. I believe they also run board game nights on Wednesday and ccg/card game nights on Friday.

As the shop has space and is a handy venue, I can be found there most Thursday nights and hopefully get some mid week games in!
Posted by James MacCraggs at 23:37:00 5 comments:

Not much progress with the FoW stuff recently, hence the lack of posts. I did have a game of 'Johnny Reb' on Saturday, which is a ruleset covering the American Civil War.
Figures were provided by John P and the Provan clan (Young David borrowing Old Daveys figures!). These are some of the Provans figures. 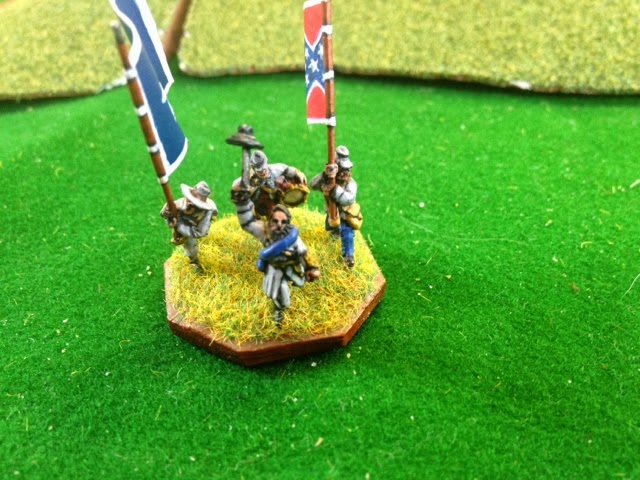 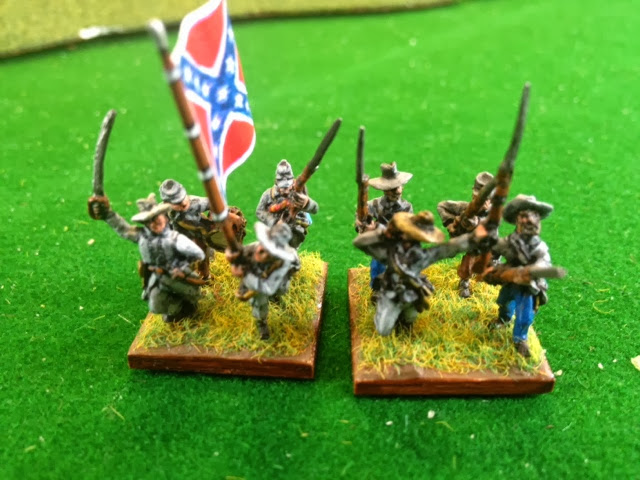 I was co-opted into playing on the confederate side and given two infantry brigades with which to assault the centre. YD took the left flank with his Brigade and agreed to a more sedate assault plan than normal - aiming to use his troops to pin the northern forces there down and stop them interfering with my attack. John P took my right flank and aimed to push round the Northerners flank and hit them while the main assault distracted them.
The left flank; 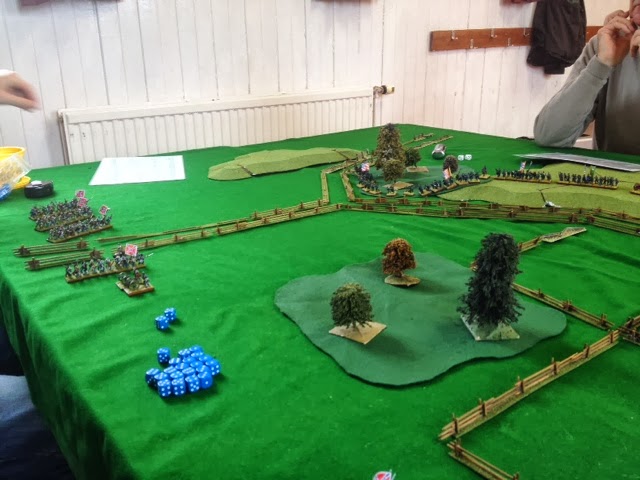 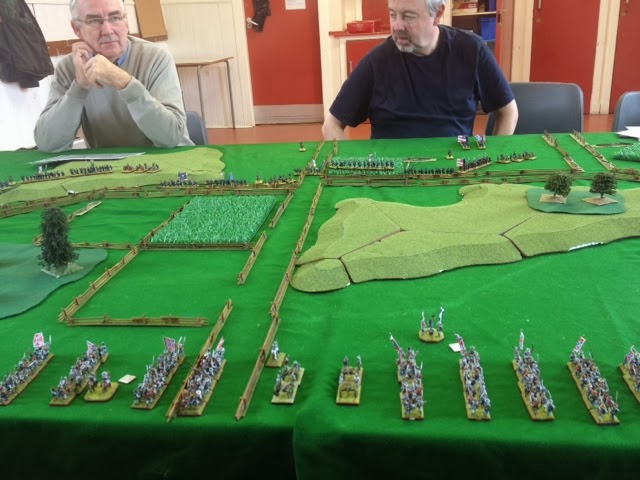 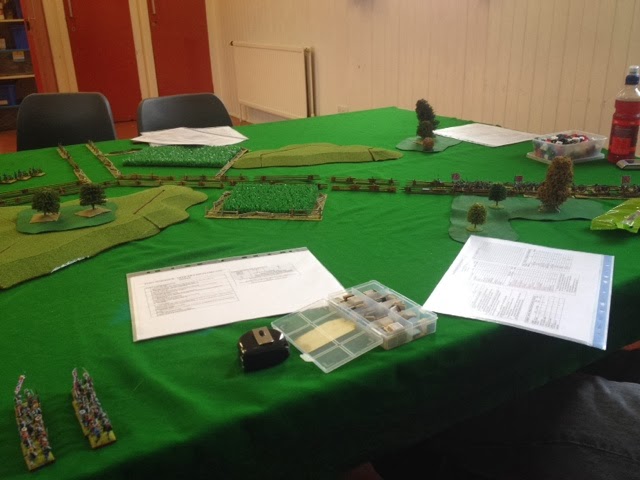 I decided to use the hill and the corn field to screen my attack, and use my two artillery batteries to distract the nothern artillery opposite me.
As I moved my troops onto the hill I switched my regular units to skirmish formations and kept the other two in what I thought were attack columns. 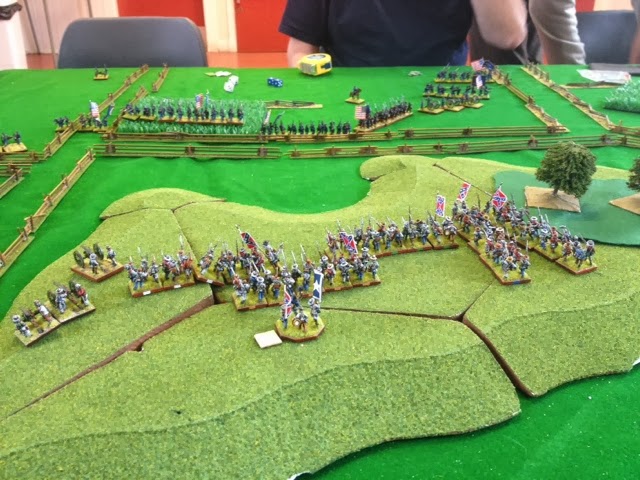 The plan was to skirmish forward to the fence line at the road, draw off the opening volleys from the infantry then charge with the columns. 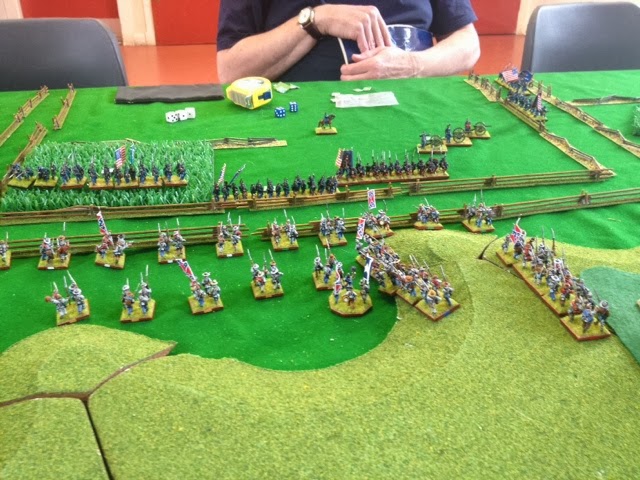 Turns out I was in the wrong type of column... I charged at the same time as the northern units, and the charges met in the middle. One of my units was beaten and driven back, the other won and ended up behind the defensive line.
The battle went on, but the northern right flank basically collapsed when my reformed troops (now in proper attack columns) charged again. 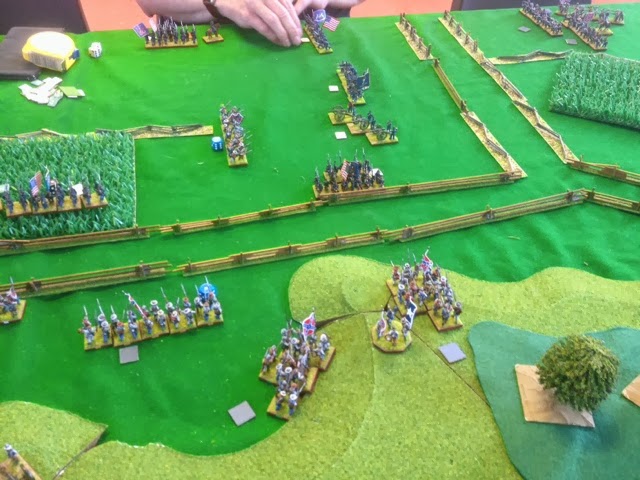 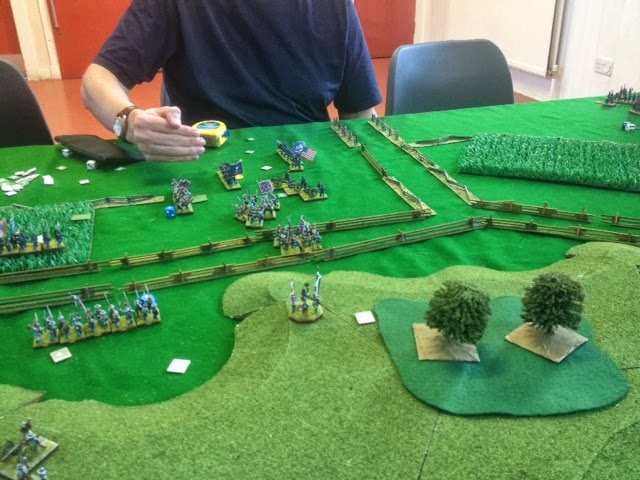 John P troops were closing and YD had the left flank pinned. We called it as a confederate victory! 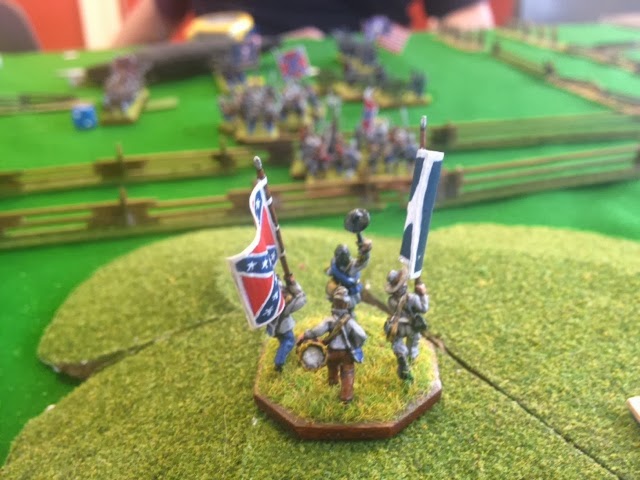 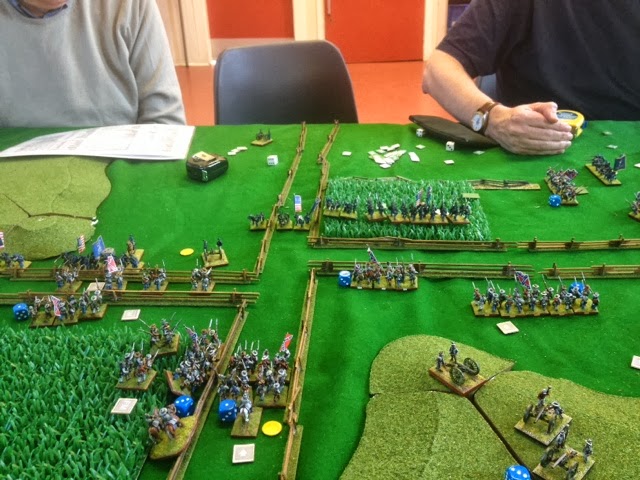 A good game, I quite enjoyed my set peice attack and thought YD did a great job. John P hardly fired a shot but served as an excellent distraction to spread the northern units out. Great teamwork and a good laugh.
Posted by James MacCraggs at 10:36:00 2 comments: