Progress slightly delayed due to a weeks holiday in a very sunny North Wales, however I have managed to finish more vehicles on my painting plan.

On show today are two models from Battlefront - these came from a out of production pack 'Colonel Vandeleur & Forward Observer' (BR885) which were included in the old V3 Market Garden book for Guards Armoured Division. These have been more usefully repurposed to units which actually achieved something in NWE (yes, really - name one successful operation they took part in). 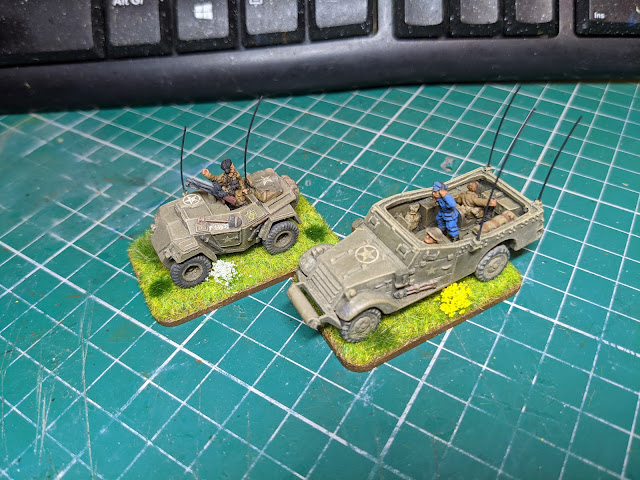 I was at a bit of a loss as to what to do with the figure in the Humber Scout, until I remembered recently seeing some footage of some 144th Regiment Royal Armoured Corps tanks being followed by a liaison vehicle. 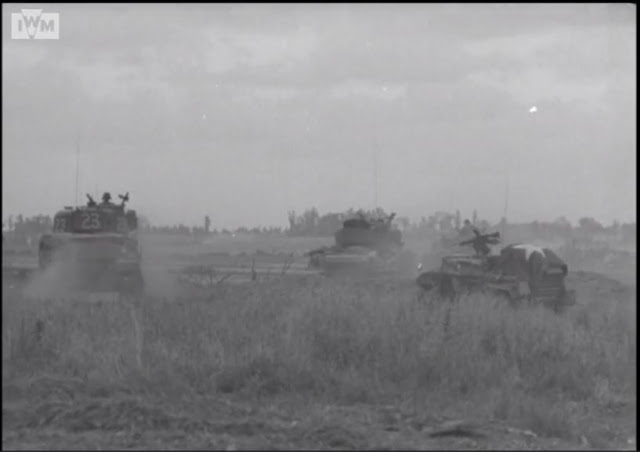 As such, I added a pintle mounted Bren and a bit of a tarp cover over the stowage on the rear. I had previously added extra stowage. I decided the officer figure could represent my Grandfather's regimental commander, Lt. Col. Alan Jolly. I marked up the appropriate decals - including using some of those I had made specifically and that I plan to use when updating all the original 144RAC Shermans I have. 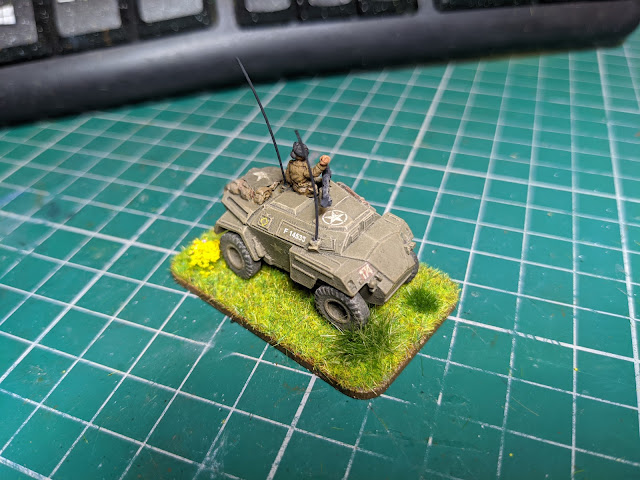 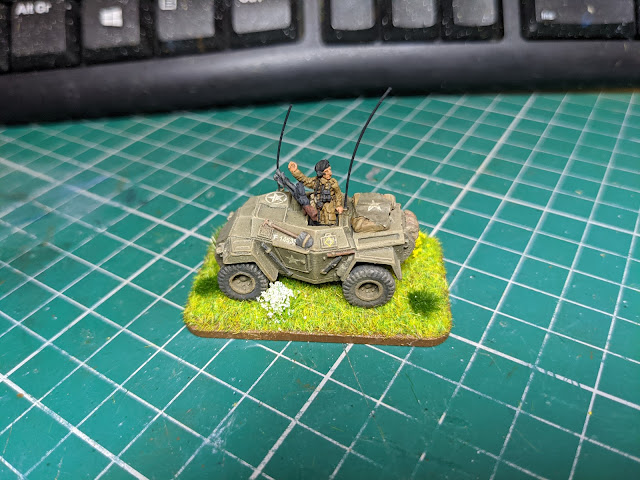 Post painting, aerials and decals were applied. The whole model was then weathered (perhaps looking a little too dusty looking) but the weathering powder shows up more in the light from the pictures.

The other vehicle is an M3 White Scout Car. The model comes with an RAF officer and a radio operator. 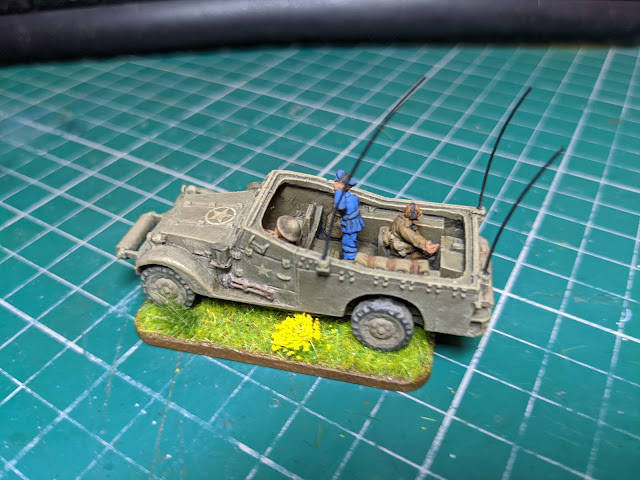 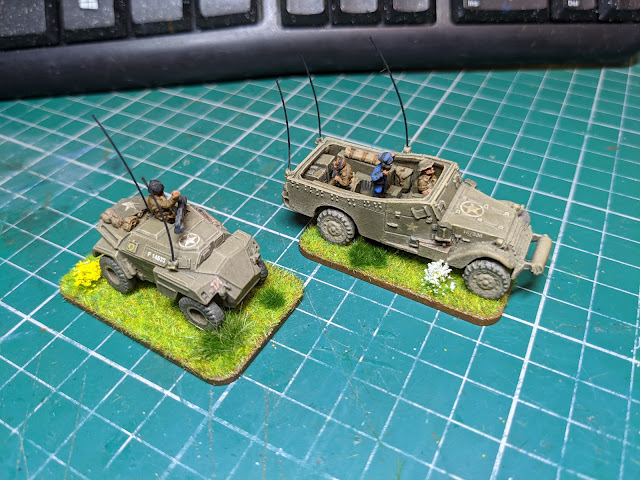 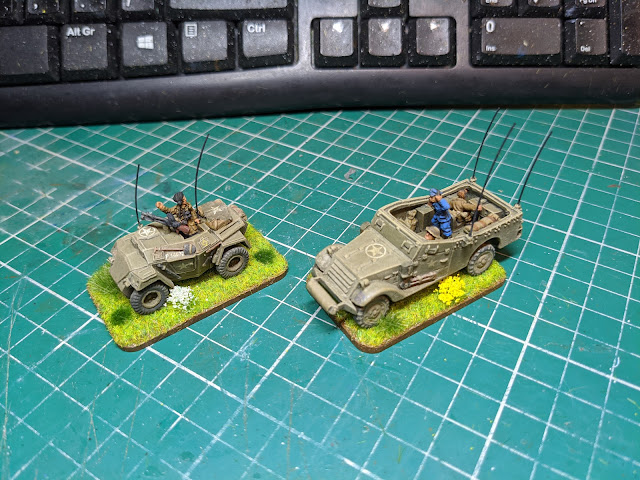 I struggled a little with the blue of the RAF uniform colour. It should be more grey blue, but I went with what I had. I also added the numerous aerials and a few bits of stowage. I struggled for what markings this vehicle should have, before spotting that the infantry brigade HQ units included an RAF Liaison vehicle which was mounted in a truck or M3 White Scout Car. As such, this one has been marked with the HQ AoS of 154 Brigade (a white 94 on a browny green background), along with the Highland Division markings.

Interestingly, it seems like the RAF officers with army units would tend to wear standard battledress due to the risk of friendly fire as the RAF uniforms were too similar to the German field grey. However, this model was clearly in RAF blues, so I went with that.

I am, sadly, starting to run down my stock of decals. Doms Decals doesn't appear to be fulfilling orders. As such, there is a still a little to do with regards the WD numbers and I'm having to be a lot more careful with what I use and where.

I also finished five M5 Halftracks for my 2nd Derbyshire Yeomanry squadron. These are done with the exception of the crew and passengers, so I'll display them when these are finished.

Oh, and bases - these are from Warbases. Flames of War medium base sized MDF with a pre-cut hole for a 2mm by 5mm magnet. This means I don't need to do anything else to magnetise these bases for my storage. My plan is to move the few other half-tracks I have painted to medium bases as well (mainly to reduce the space these models take in storage as well).

My long time gaming buddy Dai, over at The lost and the damned and the stunted blog, contributed some unusual undead all the way from the USA. Dai paints a whole load of different stuff - from WW2 models at various scales to fantasy and sci fi. Give him a follow if you don't already!

Many moons ago, Dai also very kindly sent me some bits for my 15mm WW2 Brits - so at this point I'm doubly in his debt. His contribution to the project is extremely welcome, especially given the effort of buying models from the UK, painting them and then shipping them back to the UK is no small thing. These models are from Pendraken. 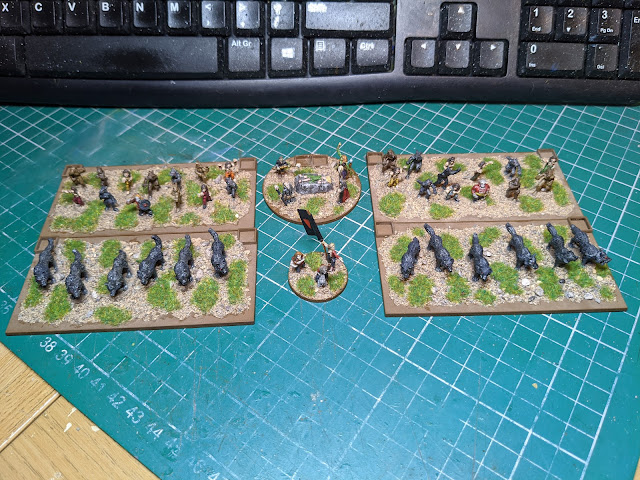 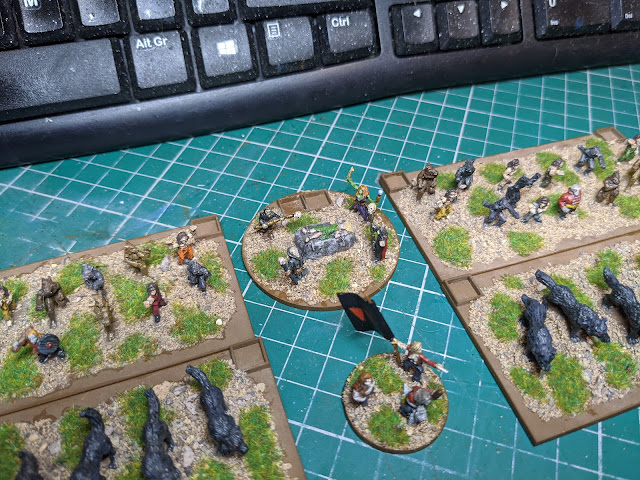 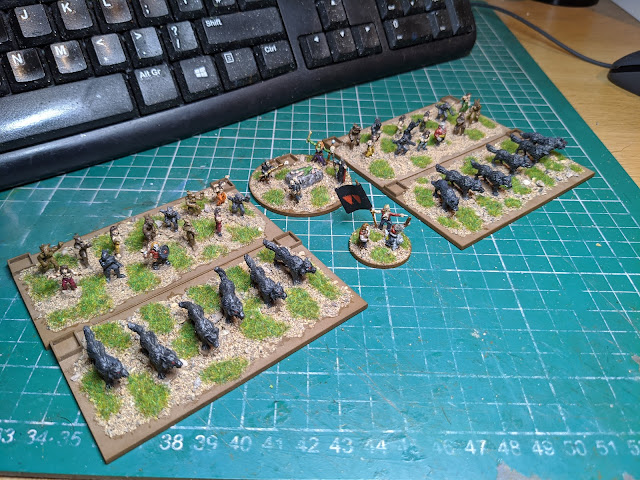 Dai's contribution to the project consisted of some mixed vampire and werewolf infantry bases, some Dire Wolves ('Dai're wolves?) which will act as light cavalry and a bunch of character models which I made into a vampire monster/general base and a hero base. I added the flags and touched up a few chips where international travel had been unkind, but otherwise it was just a matter of getting these figures on bases.

A great addition to the undead armies, and some bad guys that were not represented previously.

A few months ago I received more 10mm fantasy donations for my project in honour of my son Joshua. These came from Domesticated Bill, who's blog I've linked. Bill's very welcome donation included a ruined bridge, which should be great for battles at 10mm scale.

Unfortunately, it took me a while to get the figures based, due to lack of components, and it's taken me a bit longer to post due to some recent holidays.

In total, the donation from Bill ended up being 9 bases worth of figures. He sent figures for both the forces for good and evil, enough for two bases of Orc archers, one of Orc spearmen and two of Orc wolf-rider cavalry. 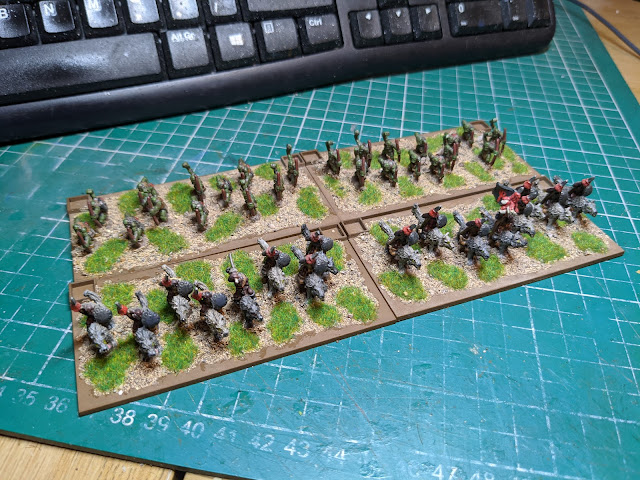 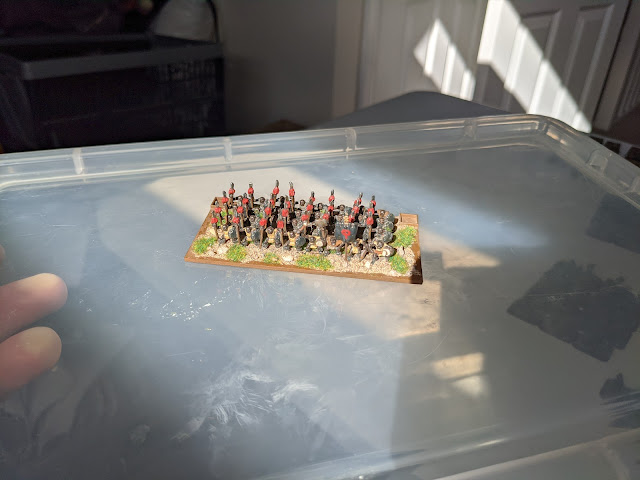 For the forces of good, one large unit of Dwarfs - a mix of hand weapons and spearmen which I've based as if the spearmen are covering the handweapon armed troops backs, one Dwarf General/Adventurer command base and two bases worth of human light cavalry. 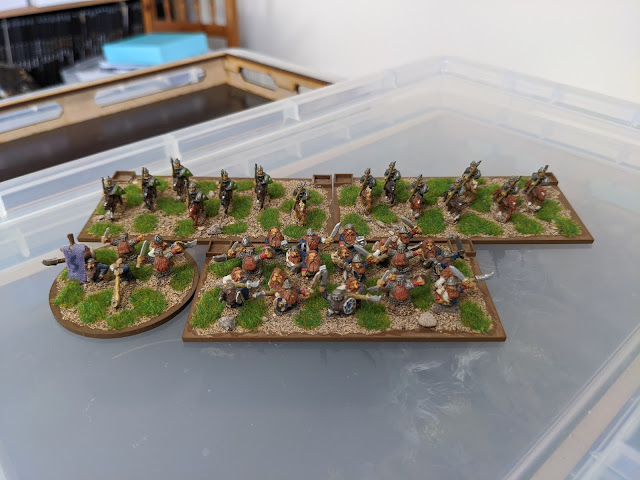 Some very welcome additions to both sides. Thanks very much to Bill for his generous contribution.
Currently, with the UK shows all being off, progress on the project has been paused till things get a bit more back to normal. I suspect that might still be a while off. However, donations are still welcome!