As I was expanding my number of Shermans (in order to give me the option to field a armoured list as well as my Infantry company), I decided to try and include some Sherman I Hybrids in my force.

The Sherman I Hybrid: 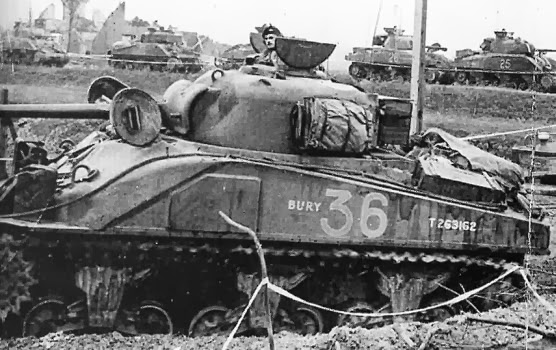 The reasoning behind the production of this model of Sherman was that a cast hull (like the Sherman II) is cheaper than a welded hull (like the Sherman I). Chrysler started producing these Sherman Composites (or Sherman I Hybrids) in 1943. From what I have read and seen from period pictures, 33 Armoured Brigade had a relatively large number of these hybrid models. Mechanically they were identical to the basic model M4 Sherman - or Sherman I in British Army parlance.

I had decided I fancied giving converting some of these style of tanks for my army. Nowhere I spotted had the hybrid models in 15mm scale, so I picked up some Sherman II models from eBay and set about attempting to convert them to Hybrid status.

To do this, I decided it would be easier to make the rear hull more angular.

Here's the base model Sherman II from the Battlefront website. 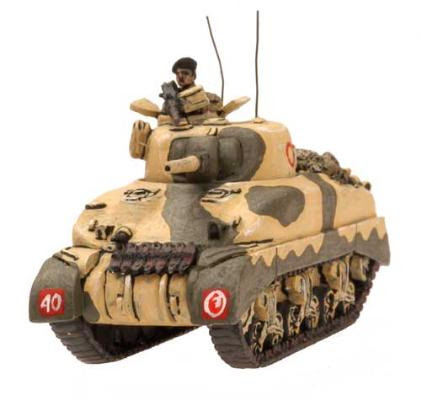 As opposed to the standard Sherman I 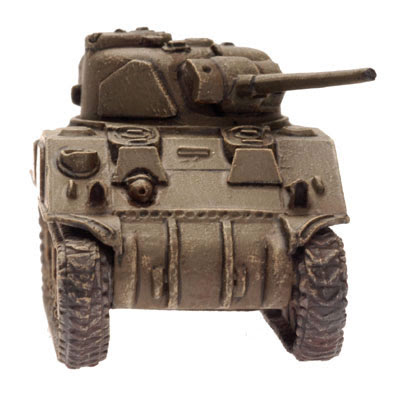 See the difference between the very curved and rounded top Sherman versus the very angular second picture? Sherman I Hybrids combine these two with a rounded front hull and a angular rear hull.

And here is my attempt at changing this into a cast front hull and welded rear hull tank: 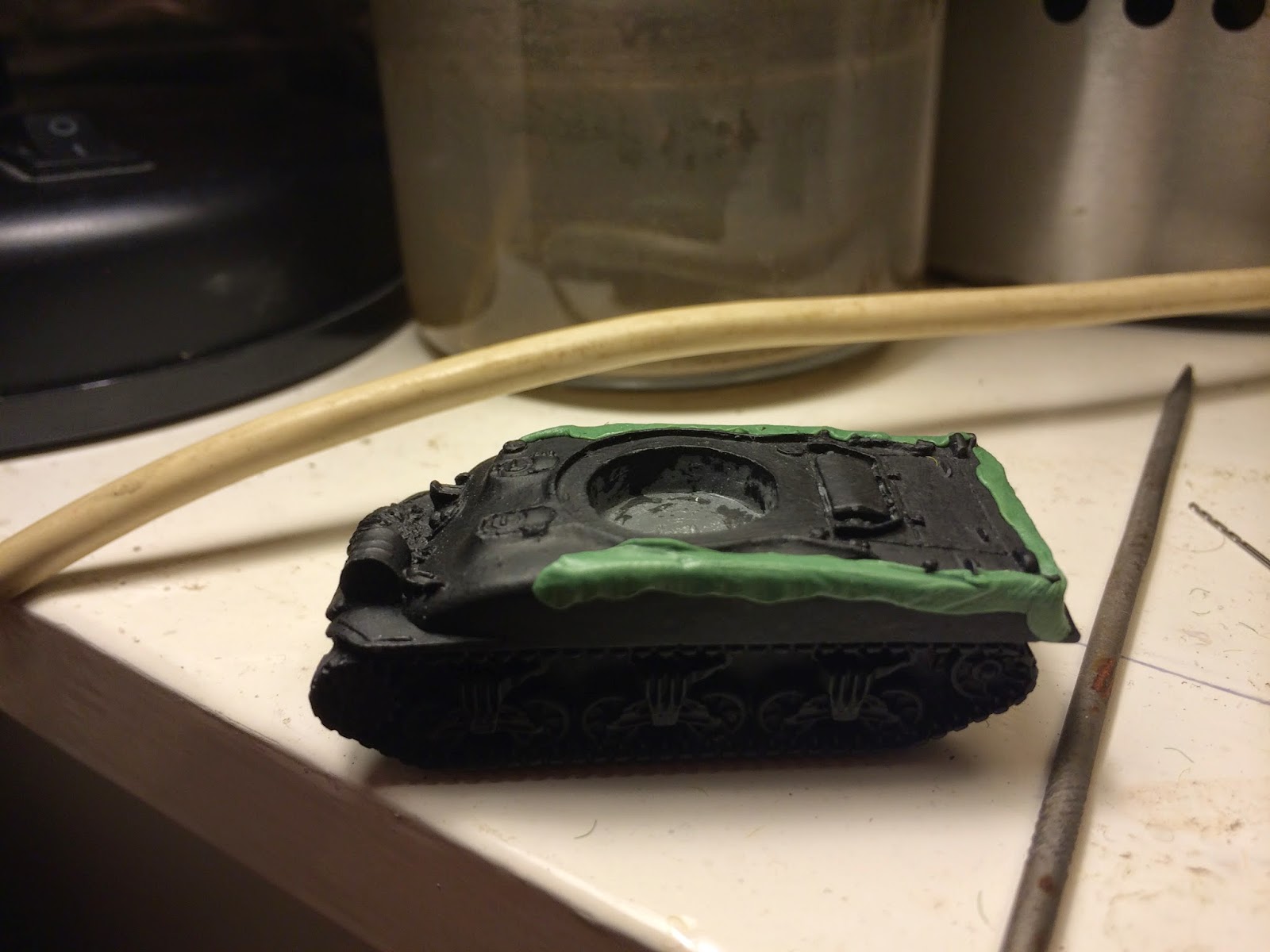 Obviously, this is stage one - which was to green stuff up along the curved rear hull sections. The other thing these three tanks were missing were the applique armour plates that were added on the lower hull and turret to protect the ammo storage and gunner.

These I clipped out of thin plasticard: 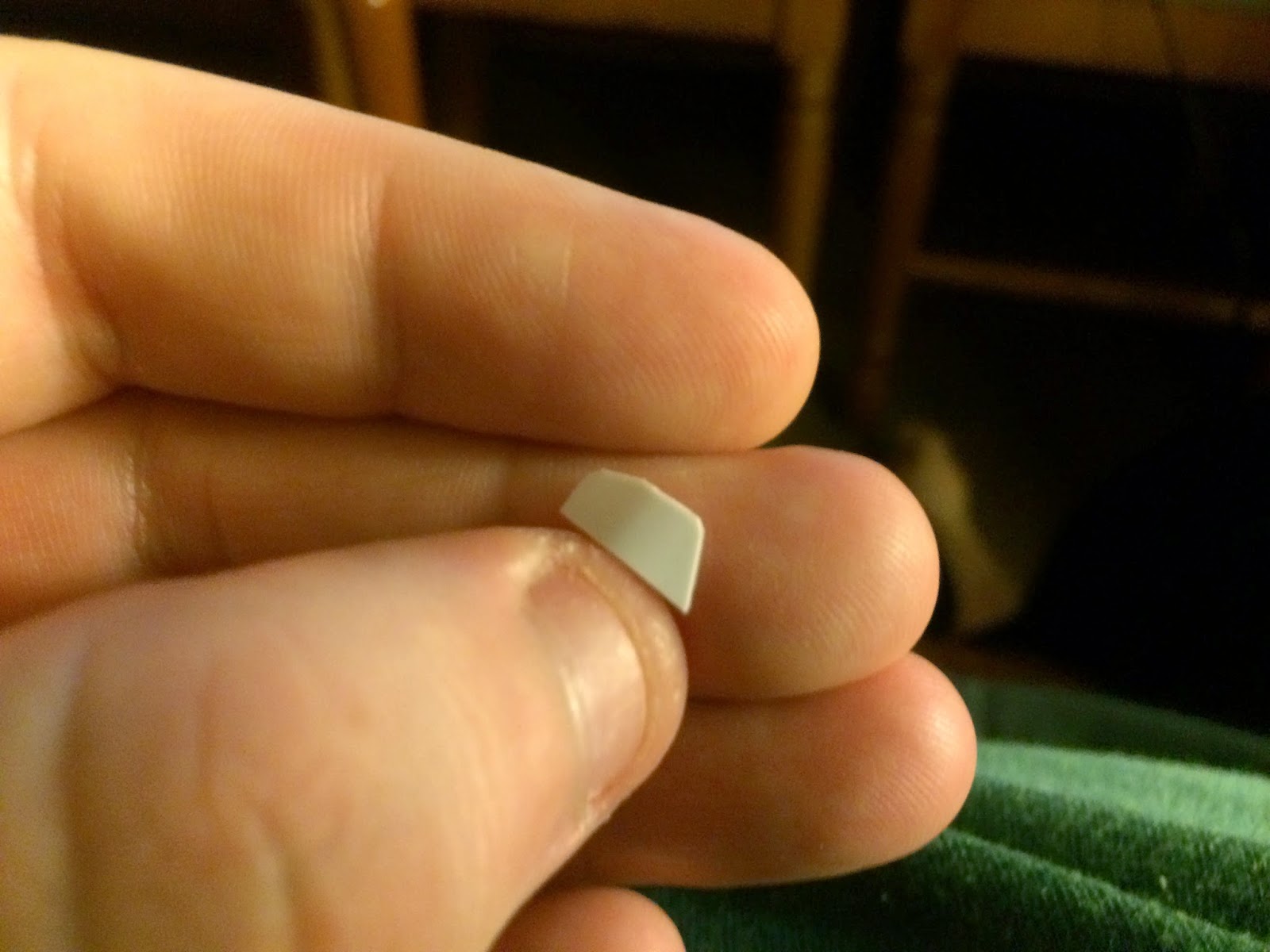 These were applied to the hull and turret - note the green stuff has now been trimmed to give a more angular edge. It's not perfect but hopefully when painted it will be hard to spot: 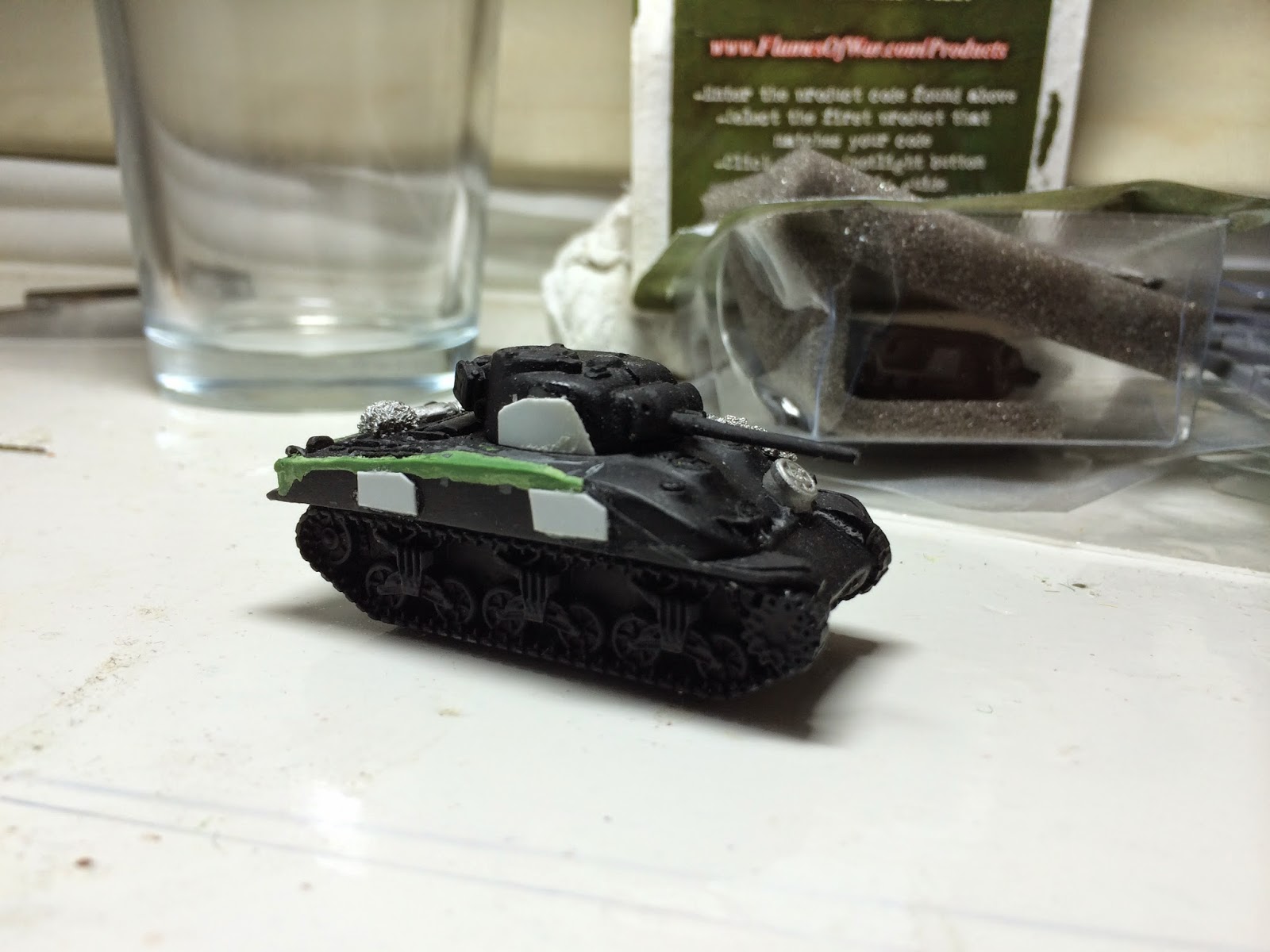 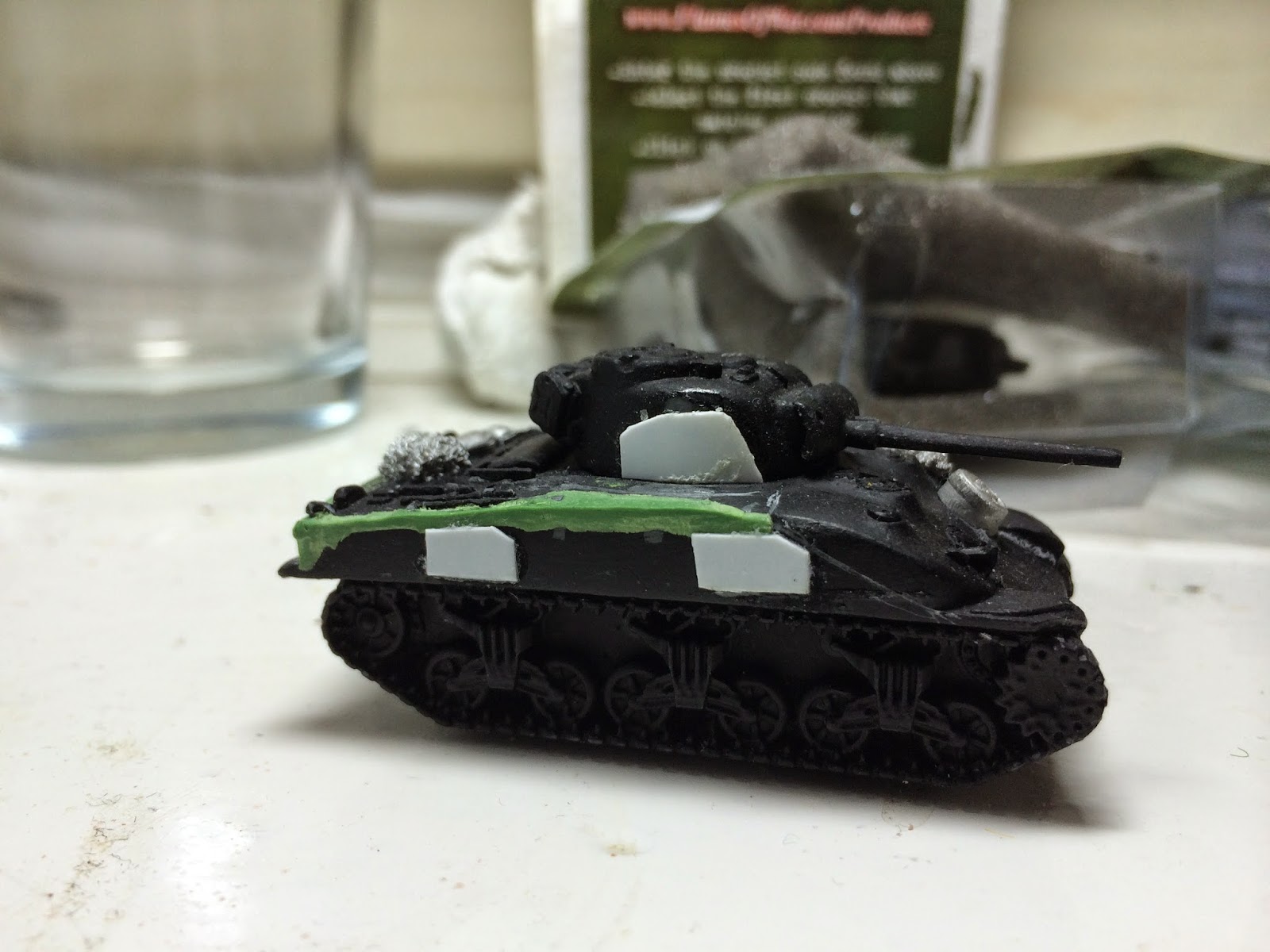 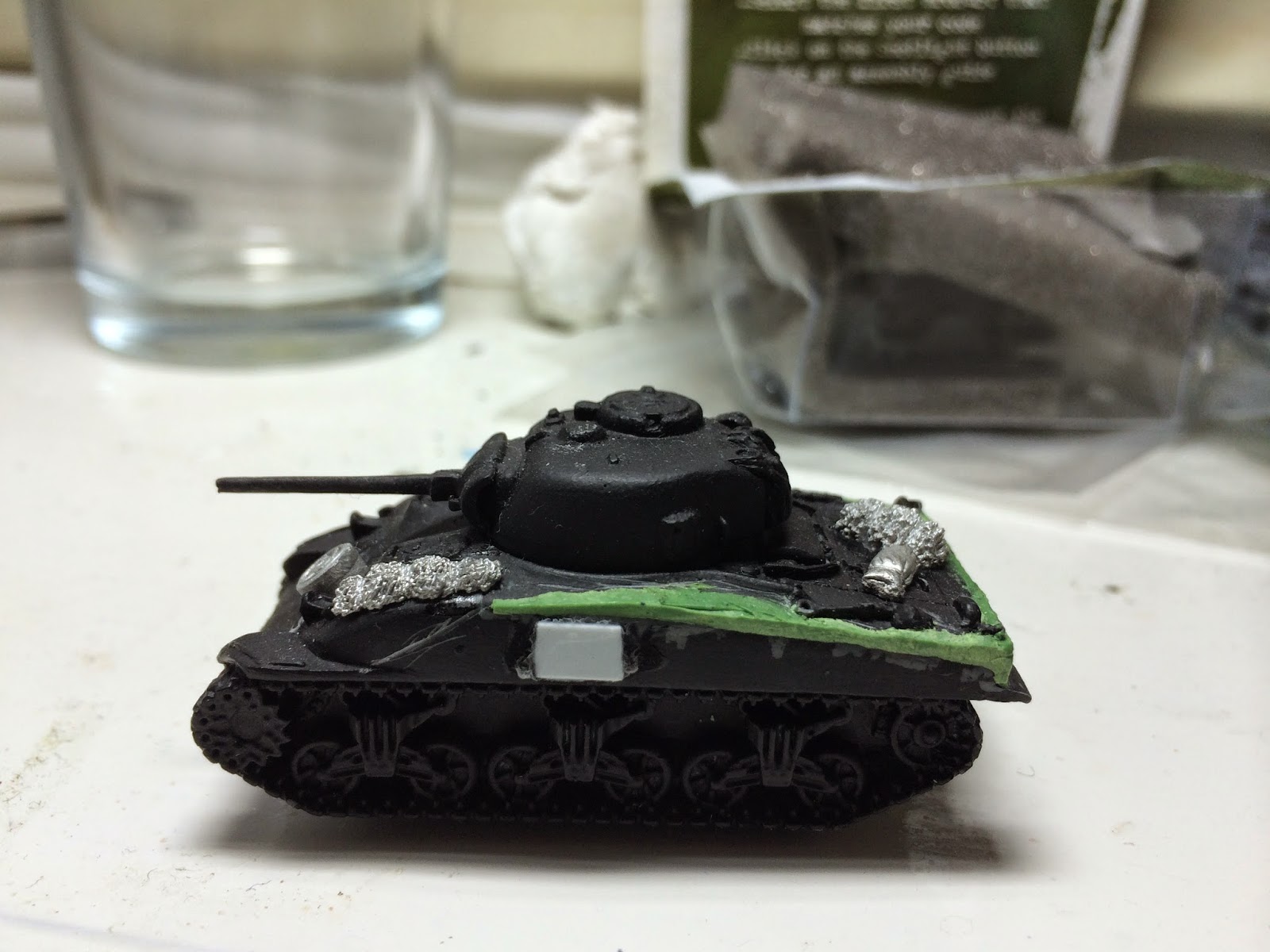 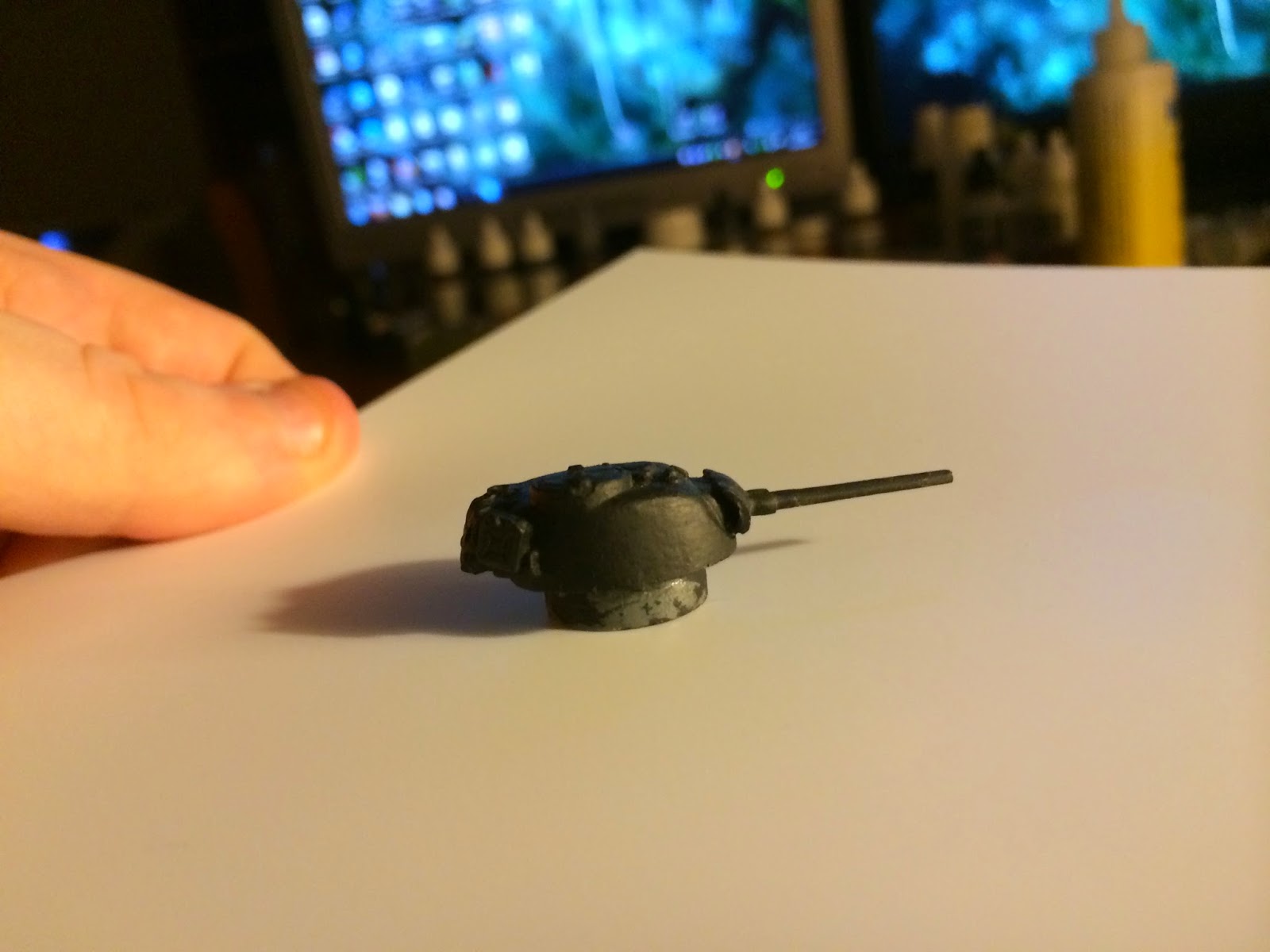 These tanks are on a odd little base that none of my other FoW tanks have. It may be because these are all cast in resin rather than having the metal track units on a cast hull. Still, I'm not worried about this as when they are based the resin on the base should hide the difference... I hope!
Posted by James MacCraggs at 16:35:00 4 comments:

Quiet month for me gaming and modelling wise. My girlfriend moved in with me this weekend, and between the holidays and getting the place organised the most I have managed to do is mess about with some Sherman conversions and start cleaning up my 4.2" mortar platoon.

The Saturday before last I did manage to play another game of Battlegroup Overlord at the Carluke Wargames Club. Myself, Cameron and Young David played, with Cameron and myself playing the allies and YD the Germans.

This was our second game of this rules set (Cameron's first) and our first attempt at playing in 15mm using Flames of War style basing. 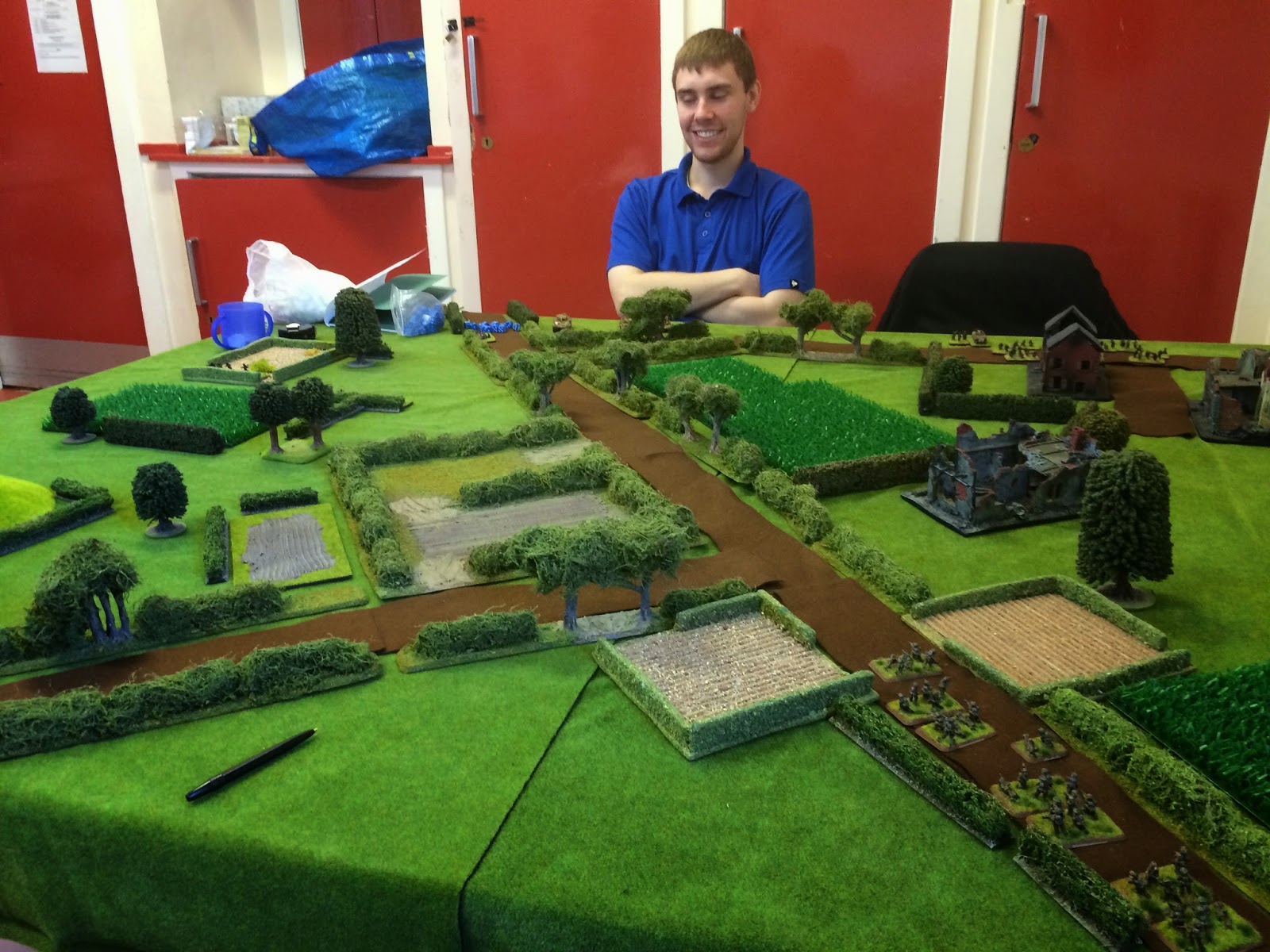 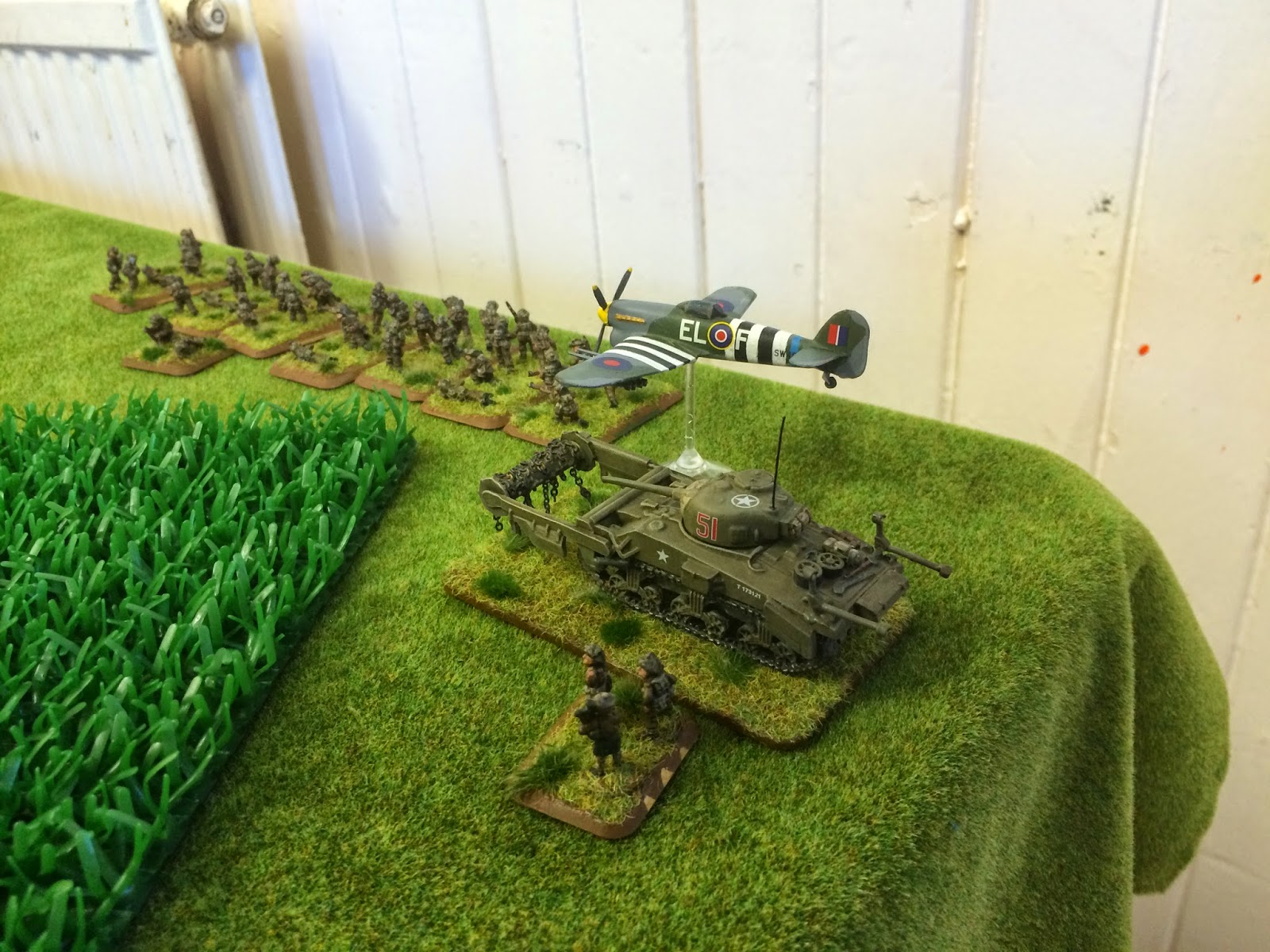 I went with 2 platoons of Infantry, a Forward HQ team, a timed Typhoon strike and a Sherman Crab (first time on the table for this model). 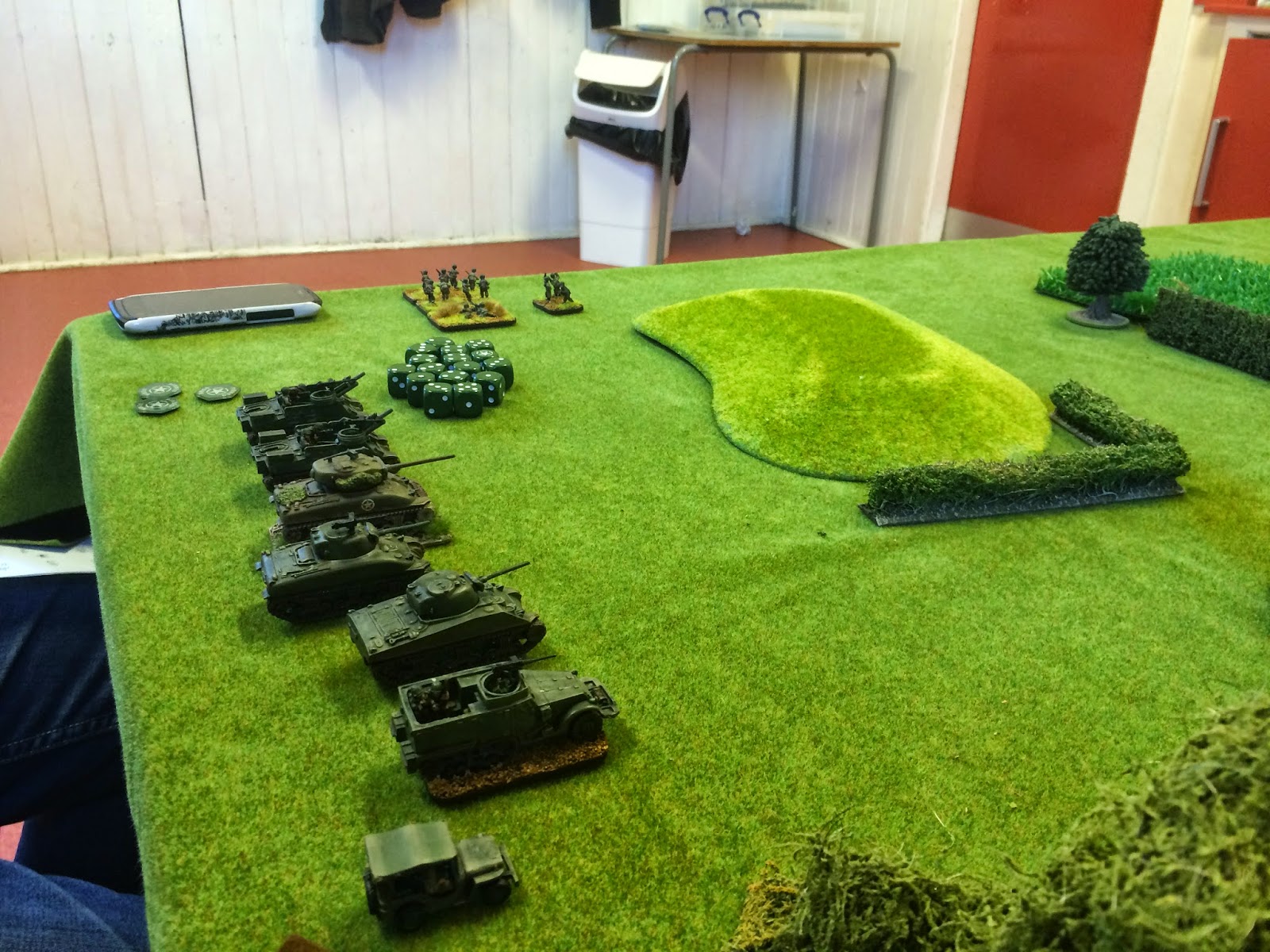 Cameron went for a US armoured list - 2 x 75mm Shermans, and one 76mm Sherman. A infantry squad in a M3 Halftrack and 2 M7 Priests. As well as a jeep mounted HQ squad. We were using reserve rules - these are a big part of the Battlegroup rules. 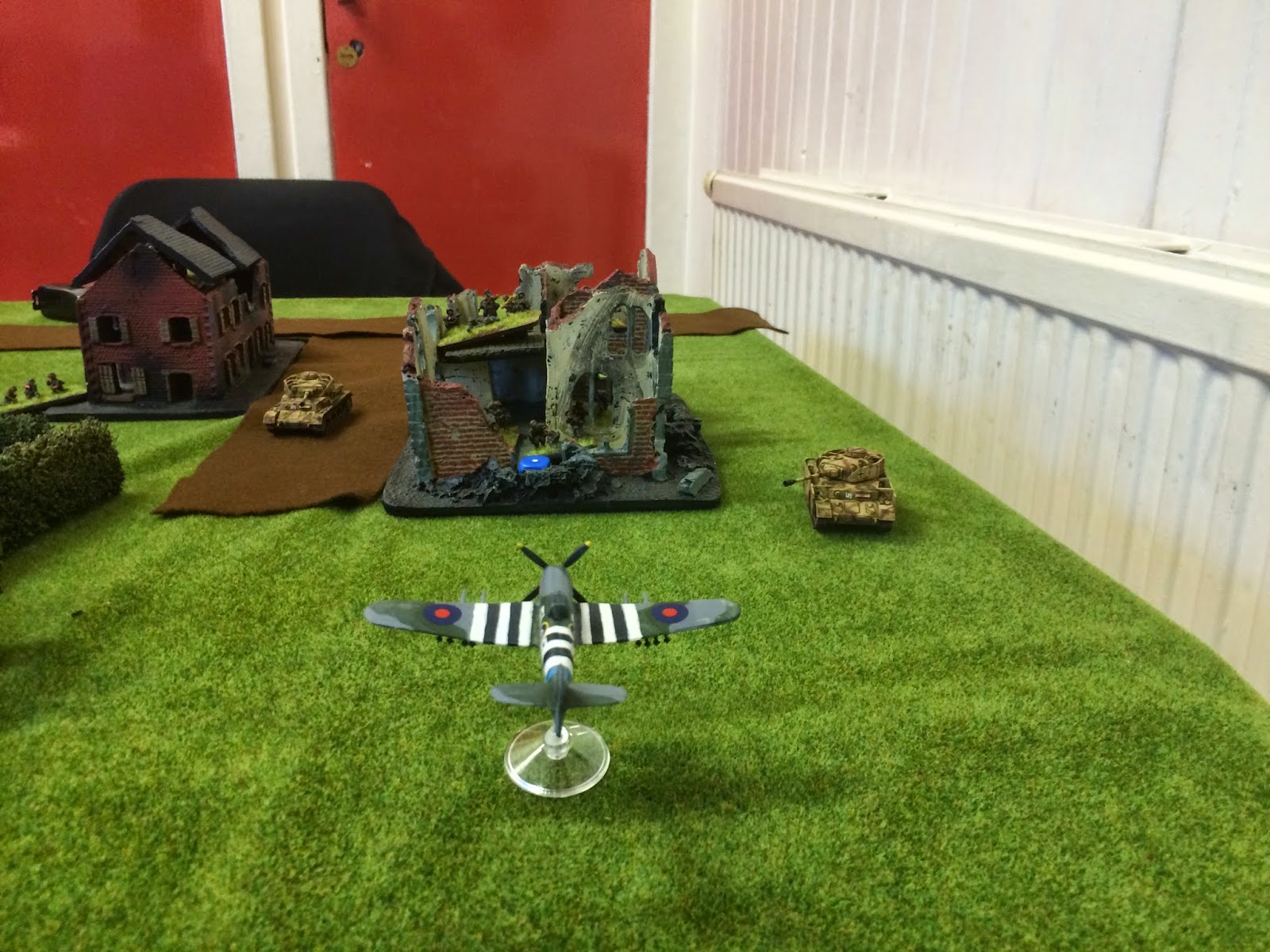 Highlights of the game for me were my placement and timing of the Typhoon strike. I had written it down to hit on the 5th turn and the building on the right. 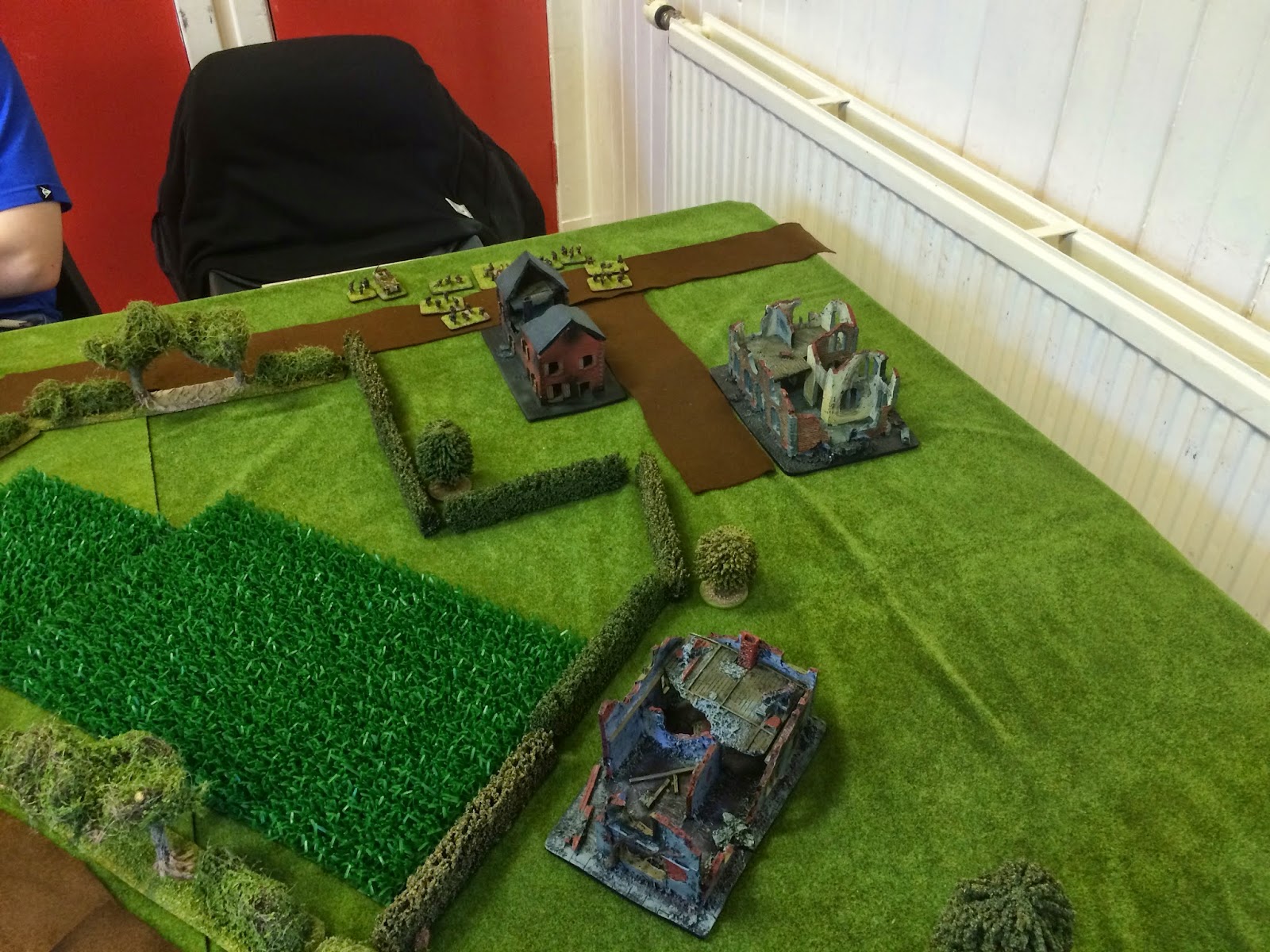 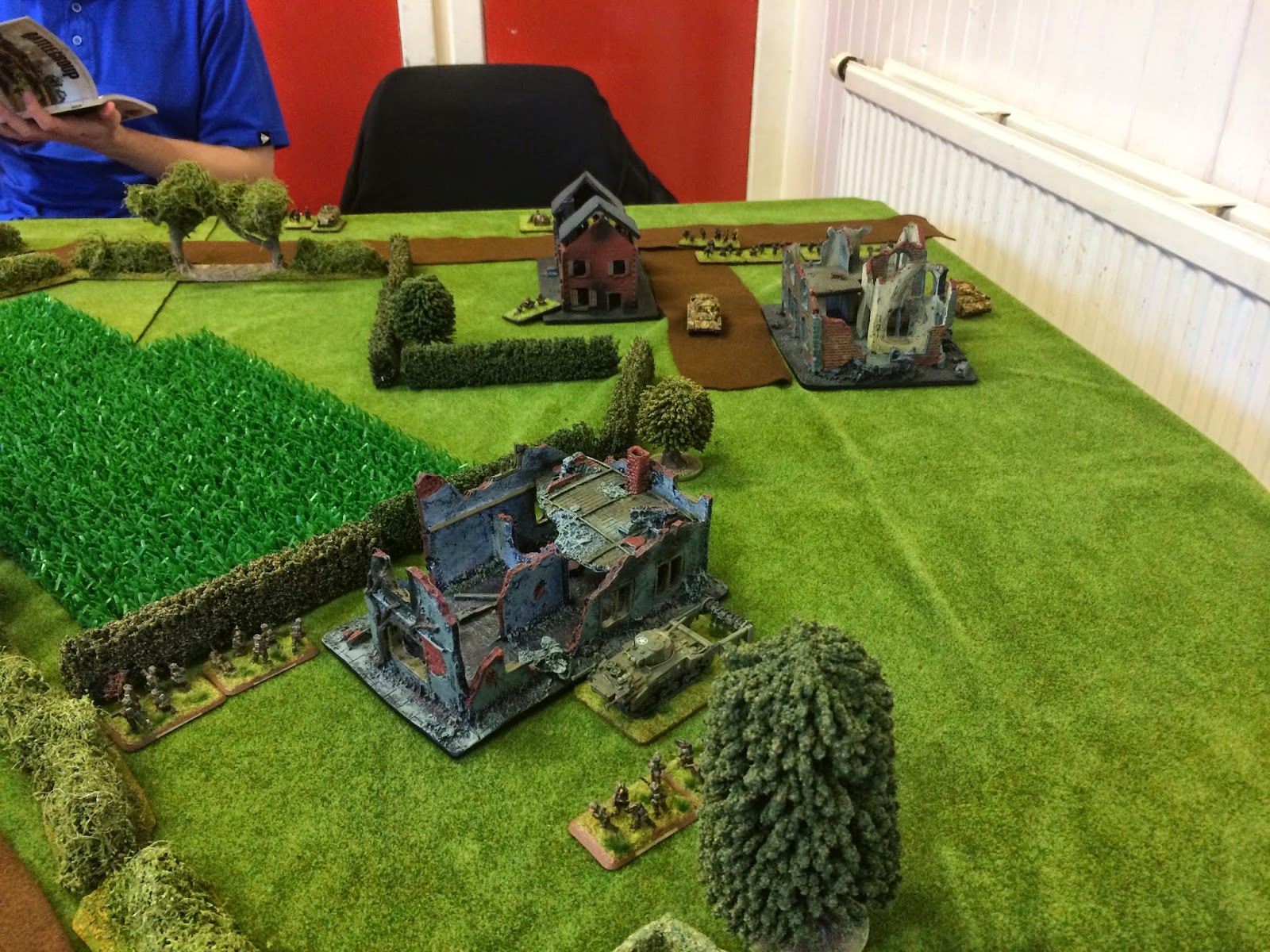 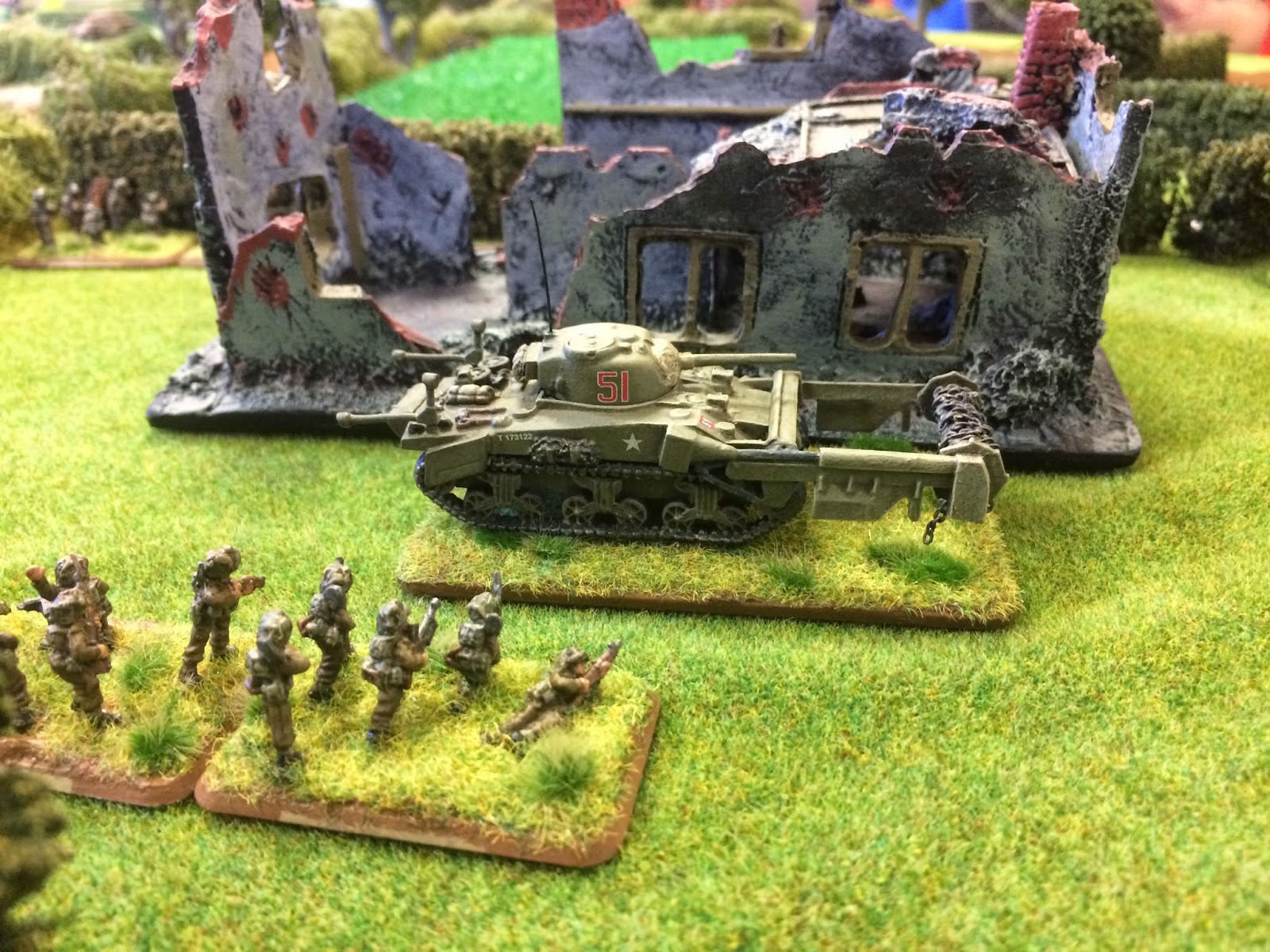 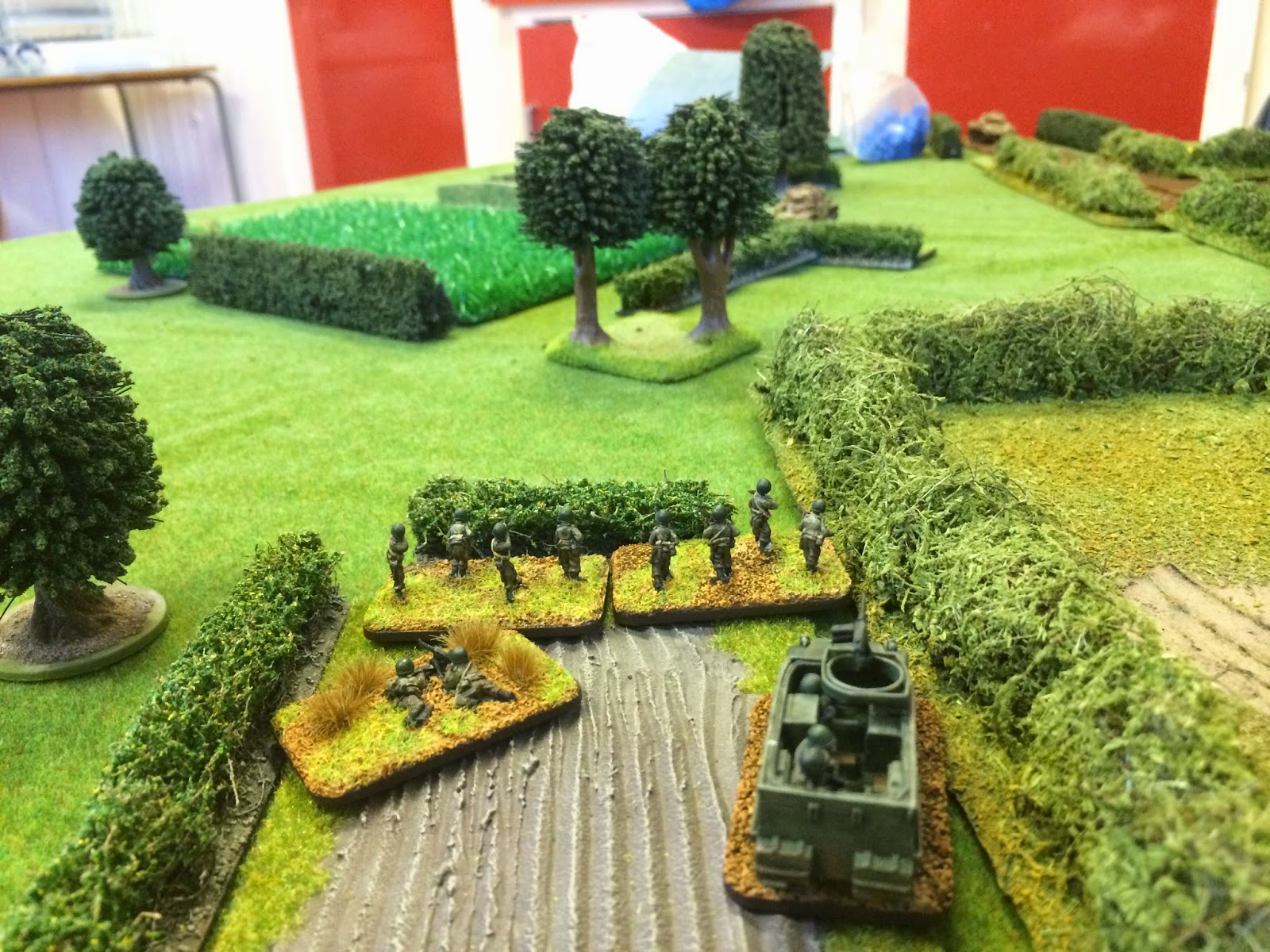 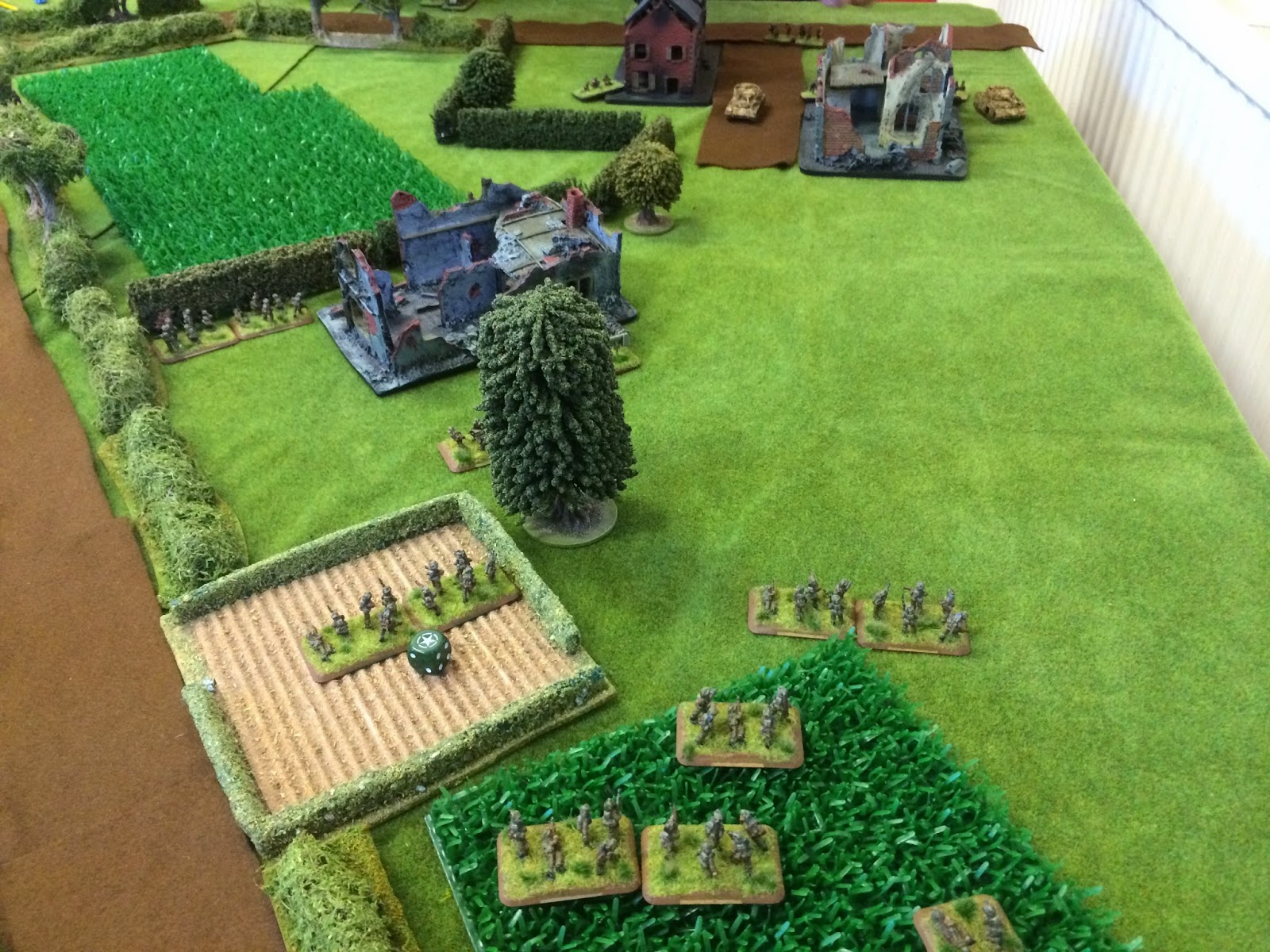 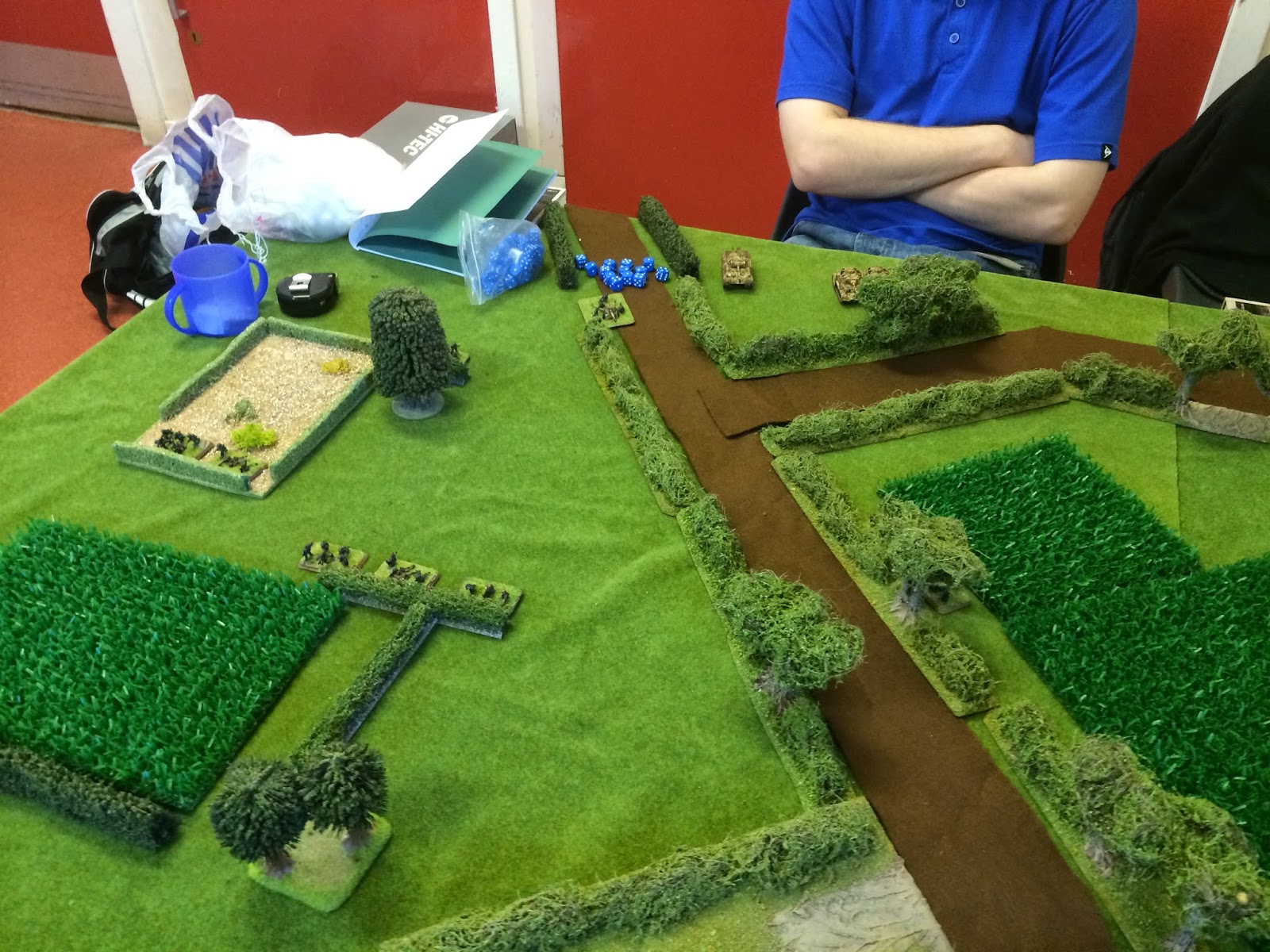 This turned out to be a good call, as the building was occupied and had some Panzer 4's nearby. In the end I my infantry got nowhere and my Sherman Crab was knocked out. Cameron's two 75mm Shermans got taken out as well, while the 76mm Sherman got engaged in a long range duel with a Panzer 4 for most of the game. 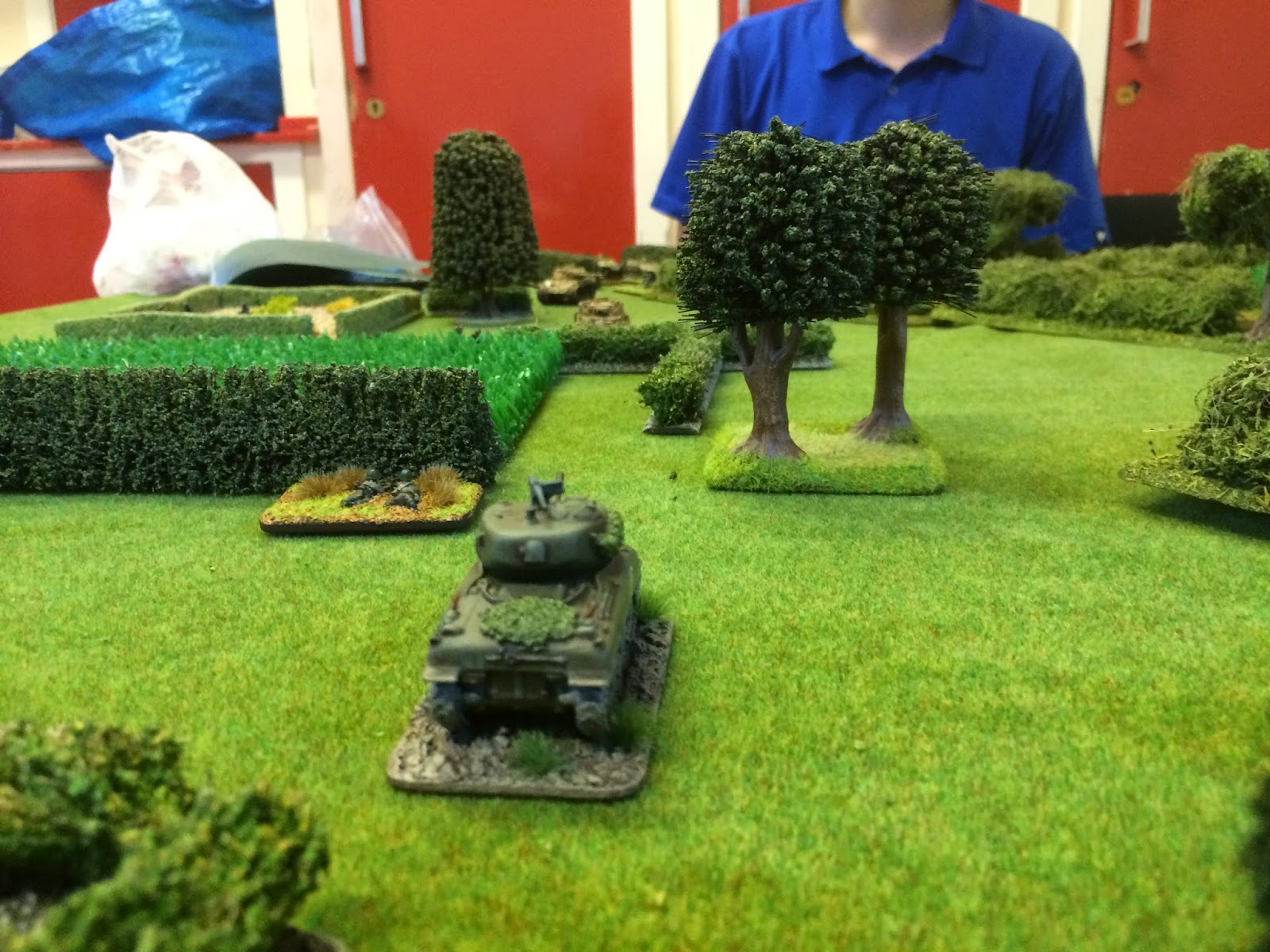 Eventually the Sherman lost, but it was an interesting fight. Really shows the difference between this game and FoW. Having to observe as part of the shooting process adds an interesting element.

The game ended with YD managing to call in a Stuka strike (a random event caused by him drawing an air strike counter on one of the few times we cause him to take casualties). 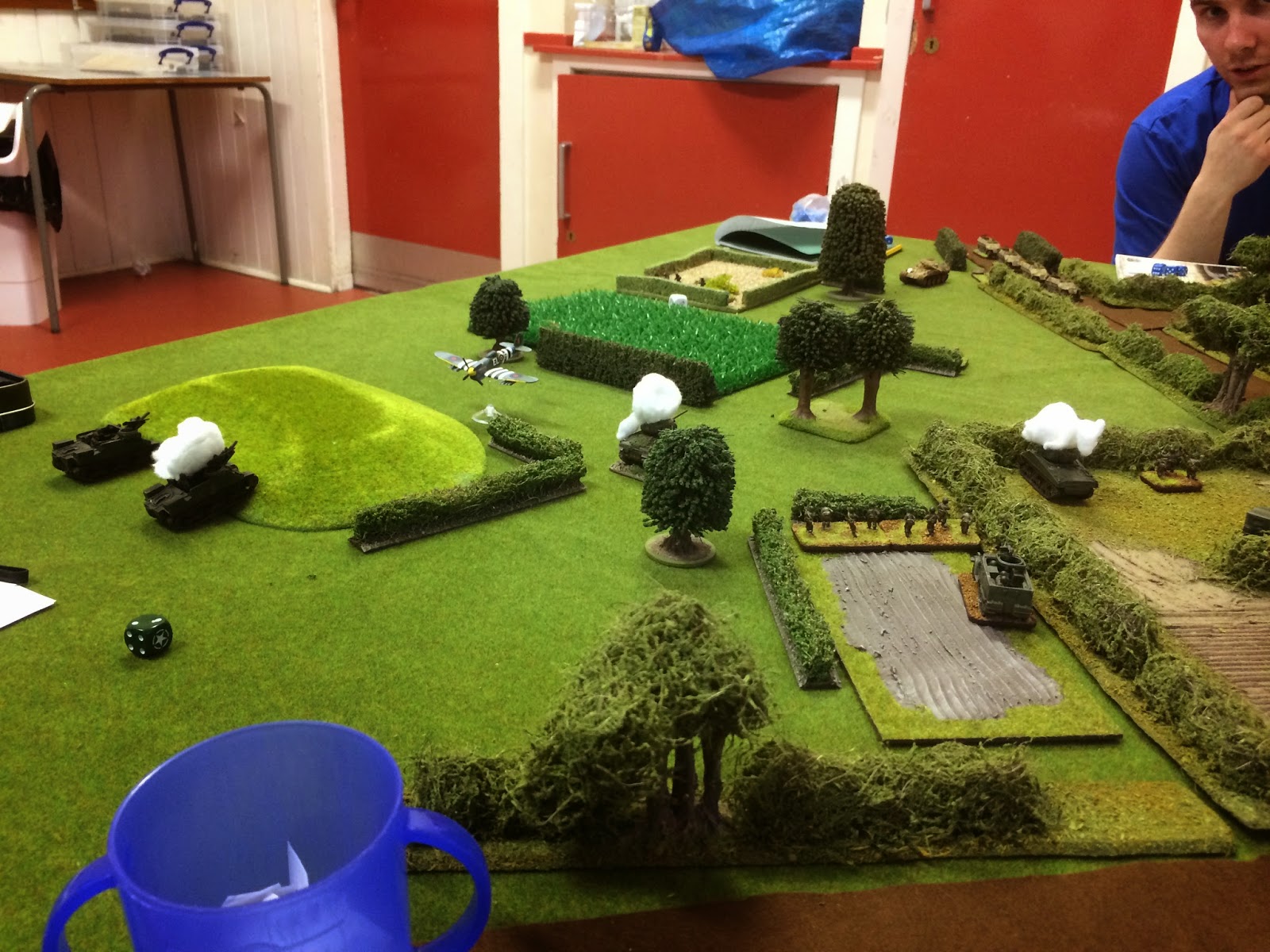 The Typhoon is standing in for the Stuka - YD was using a German list from Battlegroup Kursk. We made a bit of a mistake with the way the bomb rules work, but know that for future games. This attack was the last straw for us, and the allies attack broke from all the casualties we had taken.

The infantry casualties didn't seem to be too much of an issue in 15mm. Aided by the morale rules resulting in many of the pinned infantry squads failing morale tests and routing (lifted from the table).

All in all, another good game. Although we got smashed!
Posted by James MacCraggs at 15:47:00 2 comments: