I'm not doing too great at keeping the momentum up with either the blogging or the painting this year!

Toady's little bit of work has been spurred on by a little text from YD - "You'll need to get your Shermans done and a couple more typhoons, thats me done 3 Tigers."

So it seems like there's some sort of arms race going on!

Anyway, tonight I made a determined effort to get some work done on these many unpainted figures. Specifically the Sherman I Hybrids I've been working on. There are a few bits that are a bit rough, but I am having to just accept this. So, here's the pictures from tonight:

So that's it for now. In other news, a trip to Worlds at War over in Livingston at the weekend saw me pick up a couple of Churchill Crocodiles, some Wasp Universal Carriers and another Daimler A/C. Had I known I was entering into a arms race with YD, I might have considered some M10C's!
Posted by James MacCraggs at 21:05:00 4 comments:

Another quiet few weeks. Since Amy moved in all I've really done modelling wise is some bits and bobs with the Sherman Hybrid conversions I've been working on.

I got all three of them to a point I thought I was happy with and gave the new additions to the models a coat of primer.

Here's some pics of the first model with the first coat of Russian Green. 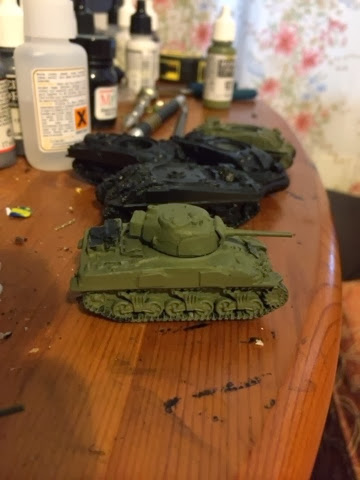 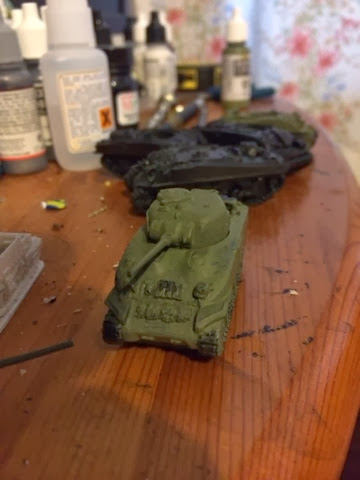 After looking at this painted hull, I wasn't happy with the smoothness of my work with the green stuff. So since taking these pics I've used some liquid putty and then a file to try and smooth out some of these areas. More pics to follow once I've applied another coat of primer.
Posted by James MacCraggs at 23:46:00 2 comments: