Hi folks, just a quick note to say I'm still here! My painting challenge has stalled at the moment as I'm moving house tomorrow! Normal service should resume once I'm settled in.

Having completed (mostly) the first batch for my painting challenge, I have updated my painting sheet to detail what I have started prepping for the next wave.

Not only do I have to put the models together but spend some time faffing about with stowage and the likes. For example, my current issue (other than fretting about the outcome on Thursday) is why the Battlefront resin and plastic Firefly's don't have the applique armour that the other late war Shermans have (which may result in me having to add it myself - having trawled through pictures). 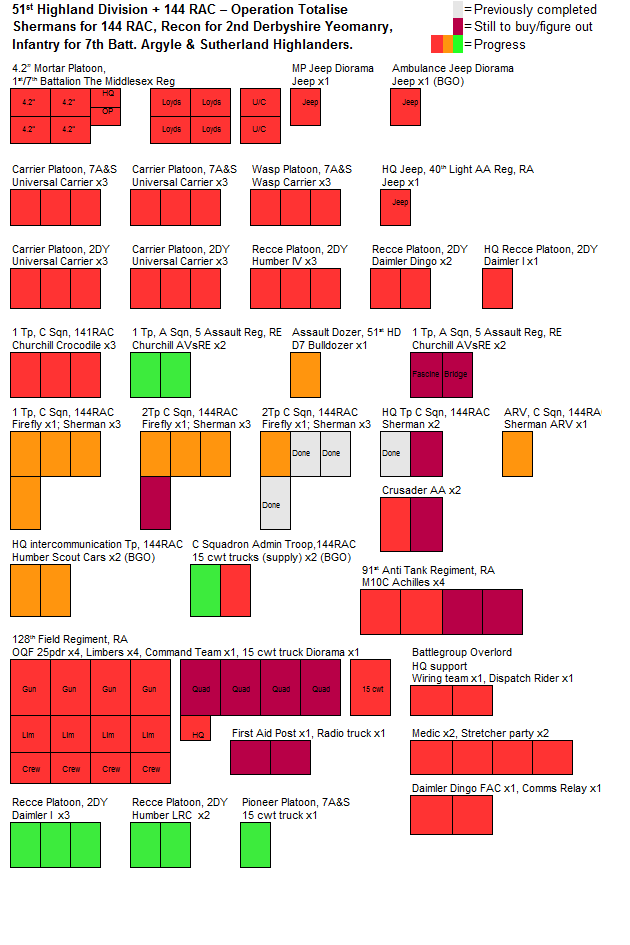 Green is completed as part of the challenge, orange is now work in progress!
Posted by James MacCraggs at 23:10:00 4 comments:

And the next set of completed models....

The Humber LRC's I made a bit of a mess of with pigment, but they will do for now. These models were part of a squadron based on the old Highland Division .pdf - however this changed with me getting the newer Overlord book. This means that these guys will be getting mixed and matched a bit in the future. The Humber LRC's to go with the Humber Armoured Cars, while the Daimler I's will be going with the Daimler Dingos.

These are all Battlefront miniatures and again were fun to paint.

First up the Daimler I's: 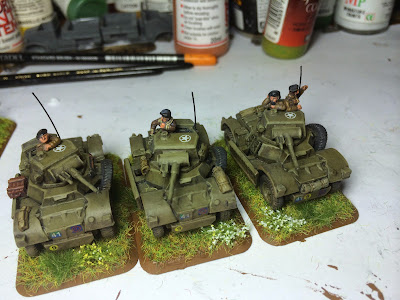 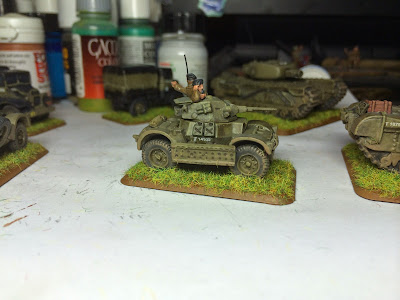 The 2DY were one of the few armoured car regiments in the NWE campaign to be equipped with the Daimler I armoured cars. This happened in September 1944, so strictly speaking after Operation Totalize. However as I was following the .pdf this was the correct option for FoW at the time. My plan now is to have one squadron of these guys and the rest Humbers. 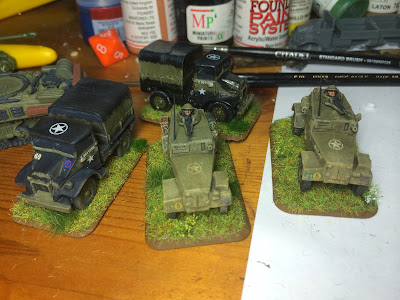 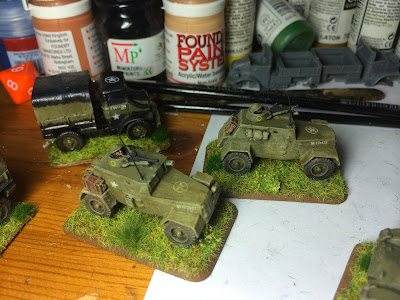 These guys are light, with only Brens and a Boys A/T rifle. But they are recce units.

Anyway, thats them all based, varnished and made as pretty as I can currently do - apart from the mucked up dust effect on the Humber LRC's!
Posted by James MacCraggs at 00:20:00 10 comments:

I got home from my time campaigning tonight with a few hours left before bedtime.

As such, I got these two Churchill Armoured Vehicles Royal Engineers finished. These guys are part of the breaching group with will go along with my Sherman Flails and my armoured D7 Bulldozer (stay tuned!). Eventually the plan is to have another 2 of these guys with a Fascine and/or assault bridge each.

The 5th Assault Regiment, Royal Engineers were part of 79th Armoured Division (Hobarts Funnies) and were tasked during Operation Totalise with supporting the night attack. I have no info on what parts of the unit were with what column, so that solved one issue. Also, I could find no reference to or pictures of AVsRE with squadron markings - it seems that as the tanks were operated by the Royal Engineers they did not use normal Tank Regiment structures. I am willing to be corrected if anyone has other info.

These two models are from Battlefront and I have to say I love them. The Churchill was always my least favourite British WW2 tank. But over time the ugly big buggers have grown on me. They were a joy to paint although they were a bit of a nuisance to put together, with gaps between the resin hull and metal tracks. 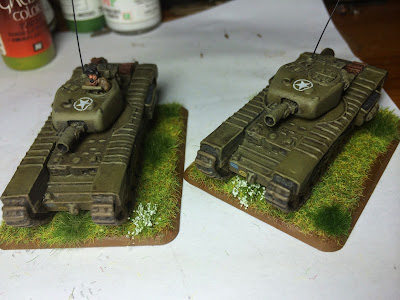 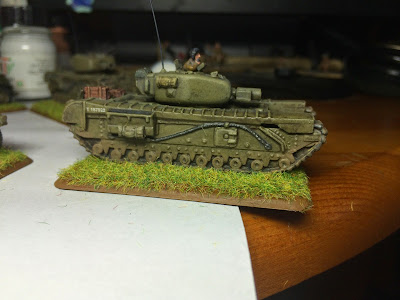 Not great pics due to me rushing to get them before my phone battery died!

Looking forward to using these in a game at some point where they can be useful from a AVsRE perspective. Need to think of a scenario that had bunkers to bust and hedges to breach!
Posted by James MacCraggs at 00:03:00 4 comments:

As I started a week later, this is my first post of the challenge. Unfortunately, it's been a hectic week here (and this week will be as well - I am out campaigning for a Yes vote after work for a couple of days and the final couple of days I have as leave from work to help out full time).

Anyway, constitutional politics aside, I got the basing mostly sorted for the current backlog. I've still got the details to do (in the form of grass clumps and flower clumps). One of the trucks also still needs decalling and  a matt varnish.

I tried a different technique for weathering the vehicles. I'm still not doing any 'chipping' as I always feel that for a chip to be visible at this scale it would have to be massive. I may try it at some point and see what sort of a result it gives - perhaps on my upcoming D7 Dozer build.

I think the results using the mud style pigment are a lot subtler and more 'natural' looking than the lighter pigment I had used before. I did this using a stiff brush and one of the Tamiya 'Mud' weathering sticks. I worked the brush on the end of the weathering stick them carefully applied it in a drybrush style. Then a quick dusting of matt spray coat.

I have started prepping the next lot of mini's - these will be my current stock of Sherman I's (5) and Fireflys (3), Humber Scout Cars (2) and a D7 Bulldozer - and maybe a Sherman V as a observation tank for Battlegroup Overlord - but that's not on the painting chart so may have to wait.
Posted by James MacCraggs at 22:58:00 13 comments:

As mentioned in my previous post, I am undertaking the 6 Months Miniature Mountain Reduction Painting Challenge. I spent the evening today trying to sort through my own little miniature mountain in order to try and determine what I have outstanding and what I have remaining to purchase.

The painting tracker template was care of Admiral Drax and was a really useful template. Thanks Chris!

Somewhere along the line I have gone from just a Infantry company list for FoW to a Armoured Squadron list and a Recon list - as well as starting units mainly needed for Battlegroup overlord... This has all resulted in a range of models getting bought and a range of different threads to my collection. As the chart will show: 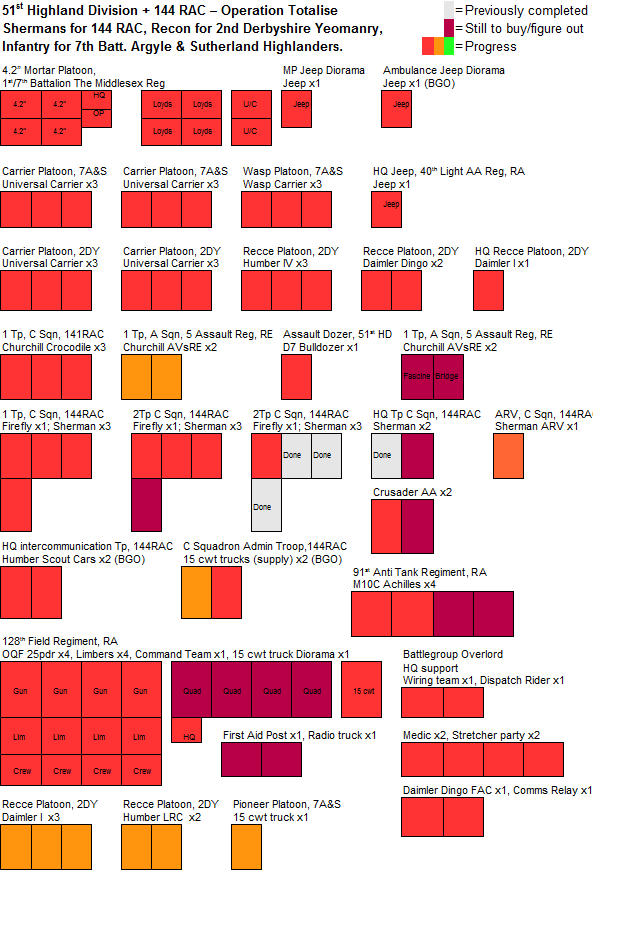 The scary thing is this leaves me with 2 Universal Carriers that are 'spare', along with a Sherman V that I have no current use for - I may kit it out as a OP tank for BGO (OMG!, I am already adding to the list!).

One of the issues I have come up with using the HD list is that the Highlanders really are stuck in the Normandy era with it. While a lot of other British lists (like the newer 53rd Division list and the Market Garden lists) have moved on into the mid late war (and the Germans, US and Russia are all in late late war). I am focusing my force around operation Totalise (August 1944) but it would be nice to have some late late war options (like Archers and the loss of the Reluctant rating). And as for the lack of a proper independent Armored Brigade list...
Posted by James MacCraggs at 22:48:00 7 comments:

Having see posts about this challenge over on Dai and Camerons blogs recently (the "6 Month Mountain Reduction and Painting Challenge!") I decided in a flash of either inspiration or because of a few too many of these...

1. No purchasing of new miniatures, EXCEPT if you use a joker card.  Like in a deck of cards, you get two jokers to use on a figure purchase.  Could be a blister pack, an ebay bundle, or a single figure...you can't splurge. - Like Dai I am changing this slightly as I work on whole units/platoons at a time and some of these are missing vehicles. However, I aim to complete whole units first before moving on to those that require purchases - If I get that much painted!

2.  Gifts do not count against you. Christmas and or birthdays etc. Also, if you're given gift cards by your hobby illiterate family or friends, you can without penalty use them on anything you want miniatures wise.  I luck out here, as I'll have Christmas and my birthday during this 6 Months.

3.  Paints, terrain (or materials), and other hobby supplies do not apply to the no purchasing rule.

5.  Zombtober will be part of the 6 month challenge so, Zombie related stuff during October is ENCOURAGED. - I won't have any zombie related models. Sorry!

So that's my challenge for the next 6 months painting wise. I'm starting a week later than everyone else so will run on for a week longer than everyone else. This month is going to be a tough one, as I am moving house on the 27th and there is the small matter of the Independence referendum on the 18th. In the new house we don't currently have a painting area for me... which will be another factor. But I will persevere!

First post detailing my painting targets soon(tm). I'll also be trying to post my updates under the banner of the Saturday Paint Table when I can as well!

With a house move coming up at the end of this month, it seemed like a sensible time to try and sort out my Army Storage solution. While my KR multicase is bearable as a means of getting my army to the table it's not really big enough now to allow me to store my whole force. Plus, I remain a little dubious about storing painted miniatures in foam.

I picked up a few months ago magnetic and steel sheets from Magnetic Displays which have sat waiting for me to get my finger out. I had also picked up some small tupperware containers that clip together neatly and are just the correct size for infantry to stand in.

I spent most of a day lining the boxes with the magnetic sheets and attaching steel sheeting to the base of my models - and this is where having everything on bases paid off. This task was made a lot easier by the fact the adhesive that comes on the back of the sheets is pretty solid. I had images of me having to use superglue, but thankfully it all went together without it. 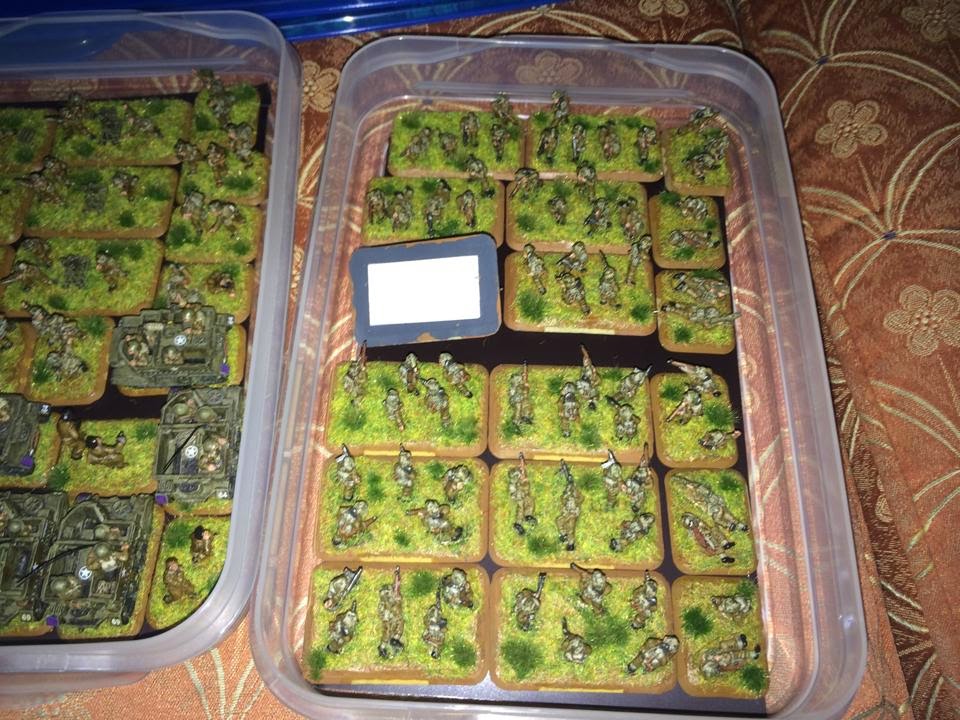 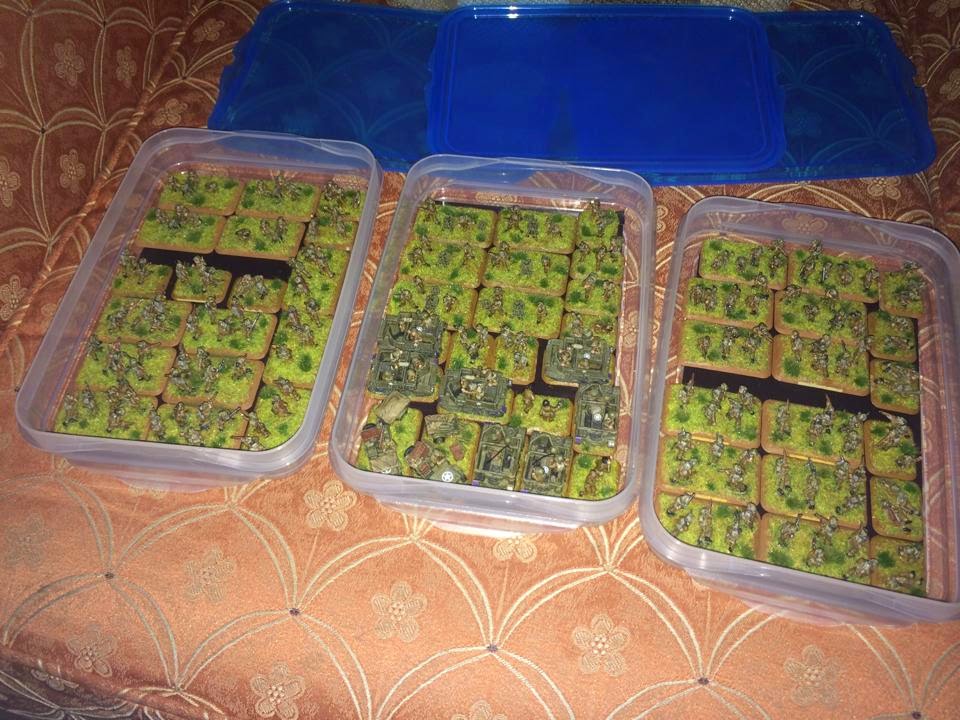 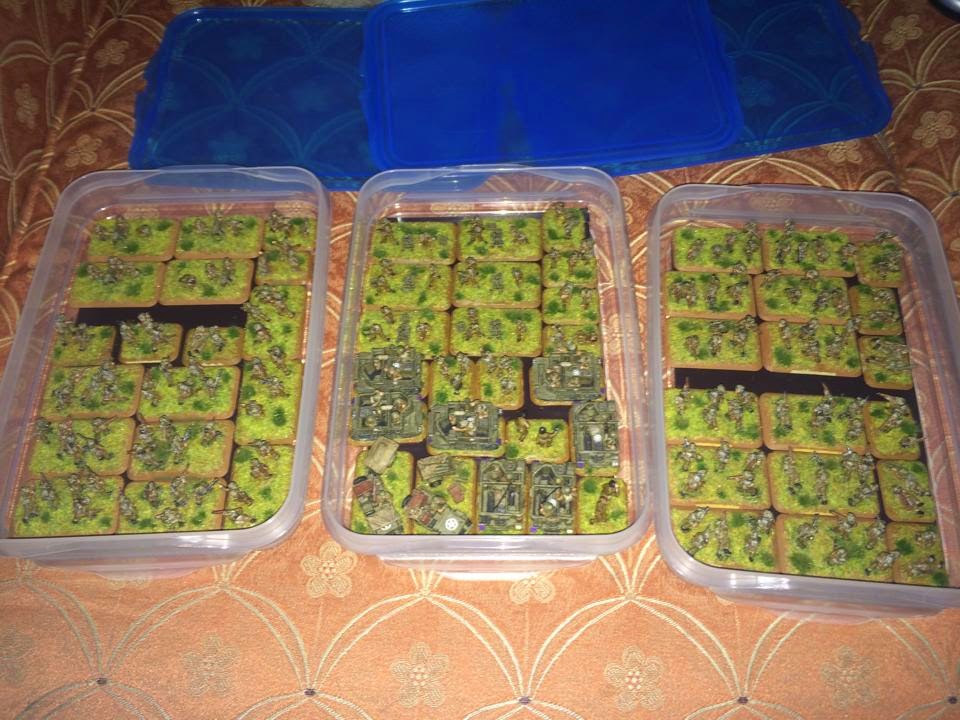 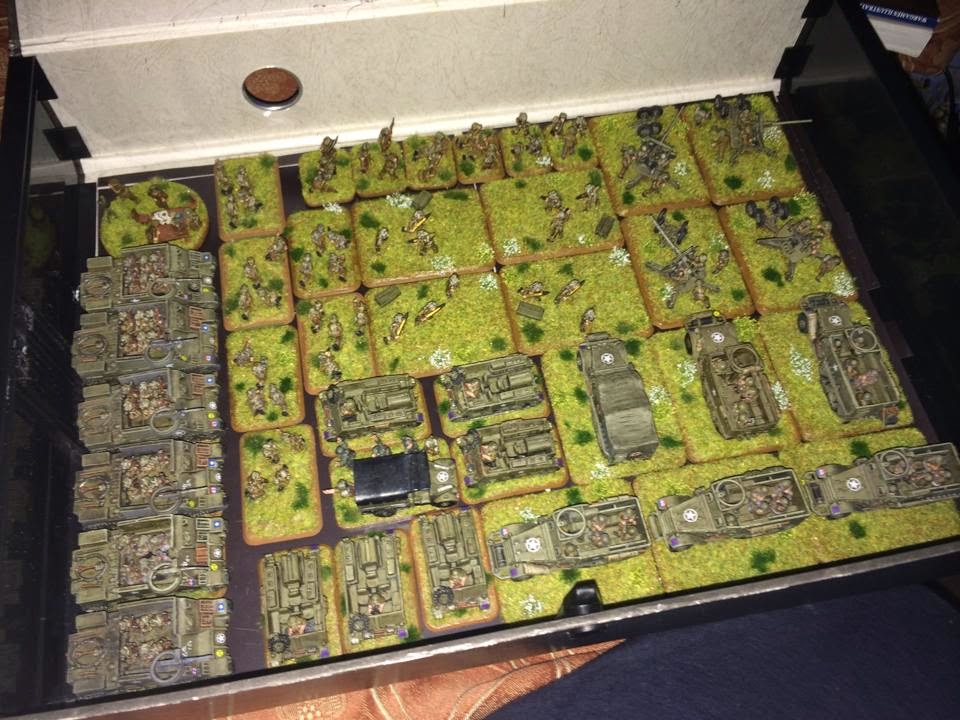 And the acid test...

Solid! I'm not sure I would hold them upside down, but the magnets are strong enough to stop everything rattling about. Longer term may see some soft foam for the inside lids, just to keep everything secure and protect them against any serious drops or knocks.

I've got another load of minis still to do - artillery, tanks and some other bits and bobs. I've ordered some more magnetic sheeting and hopefully everything will be safe and secure for the move!
Posted by James MacCraggs at 20:46:00 7 comments: