Given the number of similar Cromwell posts, I decided to hold back making more till I had the full squadron finished. With these now done, I though I would show off the whole lot. These are 15mm Plastic Soldier Company Cromwell tanks representing vehicles from C Squadron, 10 Pulk Strzelcow Konnych (10th Mounted Rifle Regiment), 1st Polish Armoured Division around the 8th August 1944. Attached units include a troop of Stuarts from HQ Squadron, and a battery of Polish M10 Tank Destroyers from 1 Pułk Artylerii Przeciwpancernej (1st Anti-Tank Regiment). 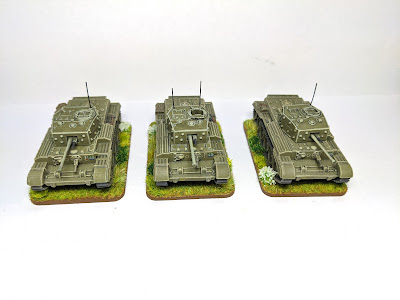 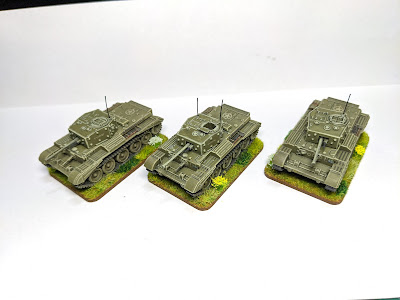 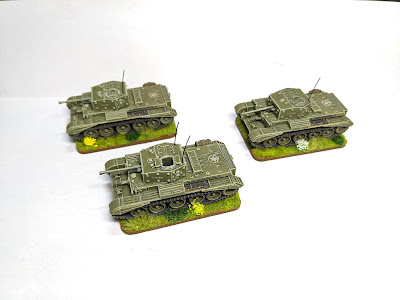 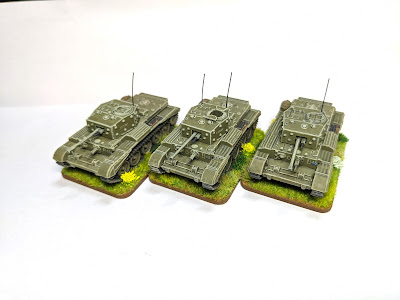 Group shot of the whole project, along with the associated progress tracker: 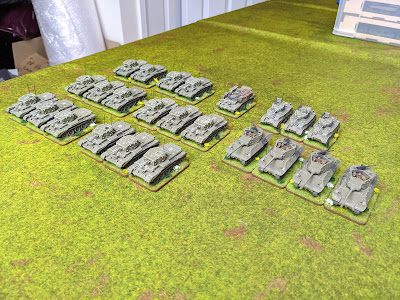 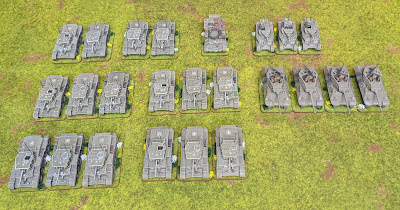 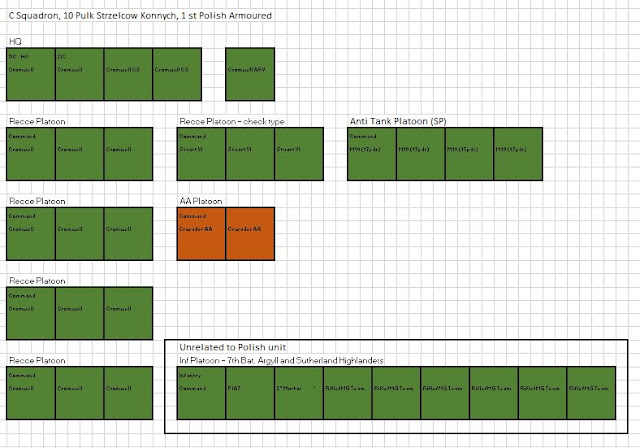 The only option not completed currently are the attached HQ Squadron Crusader AA tanks. These seem to be out of stock in the UK currently and I've decided they are not much of a priority being an attached asset (and I've already got 4 painted, 2 of which are for another Polish unit). I also still need to paint crew figures for the various vehicles, which should be a minor job other than the need to make them fit the PSC turret hatches.
Having had the unit line up, I may also add some small pennants or something to the Squadron HQ tanks, just to make them stand out a little. However, lacking in turret numbers or any other distinguishing markings, the 'line' tanks are pretty interchangeable between troops.

Slow progress - relatively - on the hobby front. I've finished another troop of Cromwells and started on the last three vehicles. More on them in a bit.

In the last few weeks I've picked up a couple of unusual models, initially from an Ebay seller but more recently from his shop Battlefield3D. A few other hobby blogs and sites have shown off some of the prints, but I'd asked for a few specifics from his catalogue which I don't think will have been seen elsewhere. I had a chance today to get out with the spray can, so the models have had a base coat applied.

First up, I've had a bit of a plan to do some of the softskin vehicles which might have supported my 144RAC tank squadron. Namely, a small replenishment convoy in the form of a truck for munitions, a petrol tanker and a water tanker. 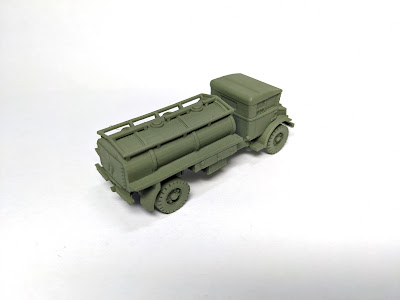 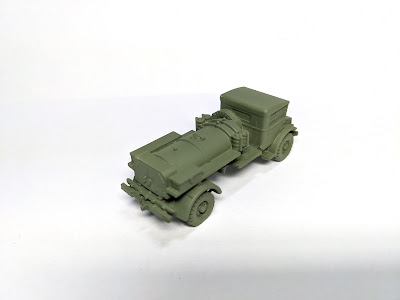 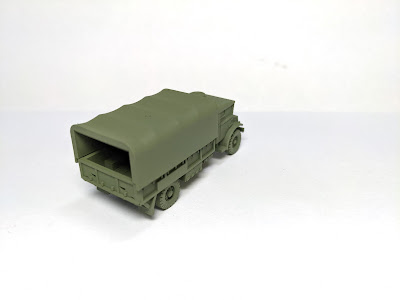 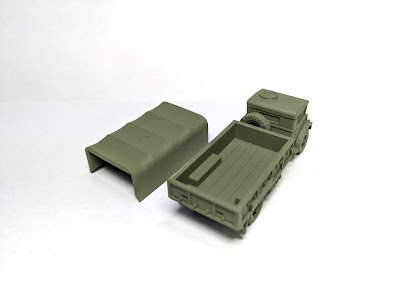 Next up, some vehicles I had wanted for a little REME diorama to go with my earlier Light Breakdown Truck. 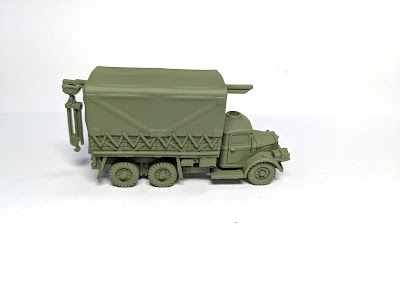 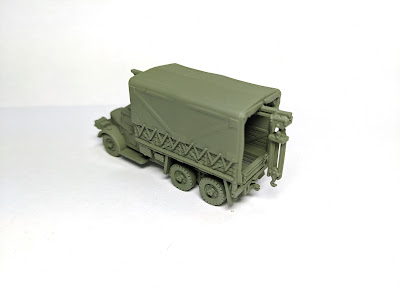 To go along with this, I picked up a little Austin Tilly utility van, and a staff car. 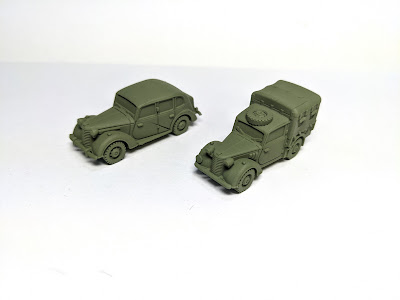 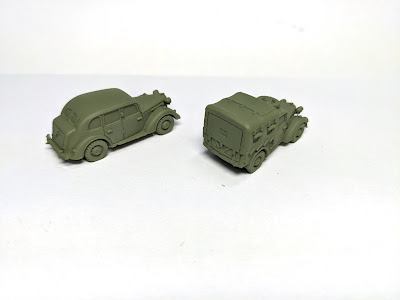 As I also have plans to do some sort of infantry battalion HQ diorama (probably along with the staff car above, maybe with a jeep), I also picked up a couple of radio trucks. I've cut off the radio aerial base in order to drill out the hole for my usual fishing line aerial. 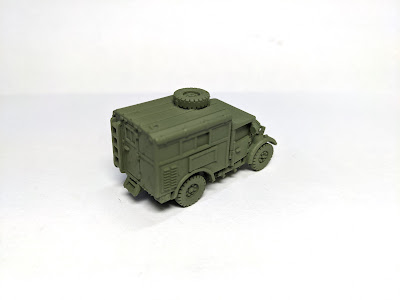 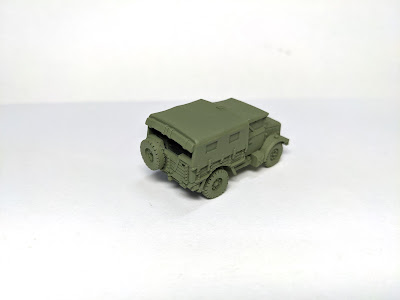 I also picked up a cool little model to go with one of my Sexton batteries: 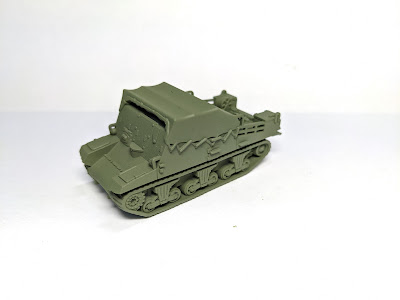 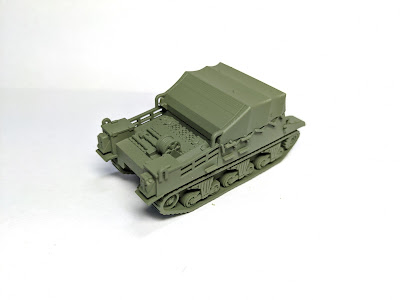 Hopefully you can see from the pictures that the details on these models are superb. The resin is nice and clean with the print lines barely visible. Details such as grab rails are lovely and sharp. The resin is very brittle, however, so care should be taken if you are trimming or cutting. In fact, I would avoid cutting where you can, my attempts at putting the winch on the gantry lorry were frustrating and upsetting as the section I was trying to cut shattered several times.
Scale wise, the models fit in well with the rest of my Battlefront resin vehicles: 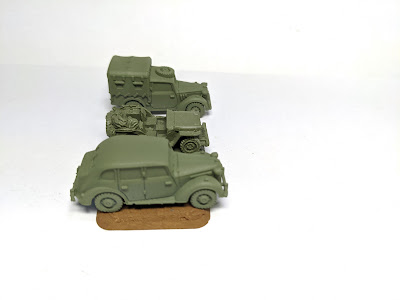 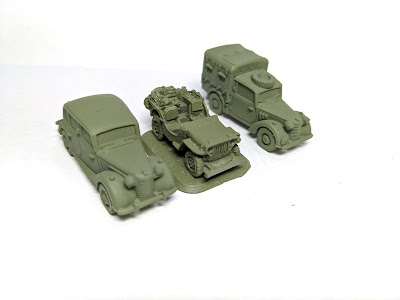 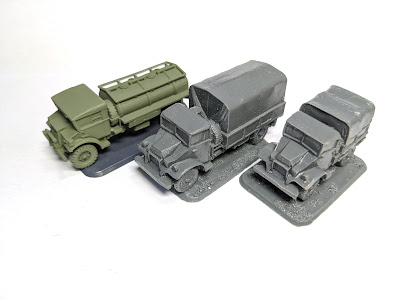 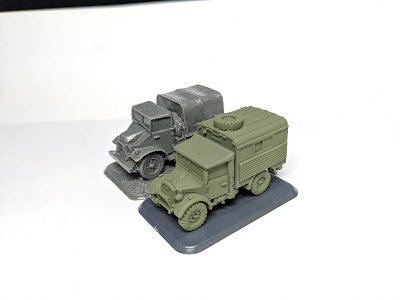 These models did cost a little more than you would expect for 3D prints, but the quality really is amazing and the customer service has been great. There is also a good range of options to pick from, as can be seen in the catalogue. My models all came from the Marco Bergman collection, which Battlefield3d have a commercial license for.
These vehicles have all been added to the paint queue - hopefully it won't be too long before I can get them done.
Posted by James MacCraggs at 21:58:00 2 comments:

I've been continuing to use what spare time I can get beyond the demands of parenthood to focus on my Polish Cromwell project over the last few weeks. While progress has been a bit slow on getting this particular troop completed, I've also done a small amount of work on troop #4 and a reasonable amount on troop #3.

As I covered in my previous blogs (1, 2 and 3) regarding this project, these are 15mm Plastic Soldier Company Cromwell tanks representing vehicles from No.2 troop, C Squadron, 10 Pulk Strzelcow Konnych, 1st Polish Armoured Division around the 8th August 1944.

I think I've found a solution to my recent photo lighting problem, and it appears to be related to the standard photo app on my Google Pixel 4 phone. I tried a different app, and the pictures came out a lot lighter, suggesting the app is doing something to make my photos much darker. 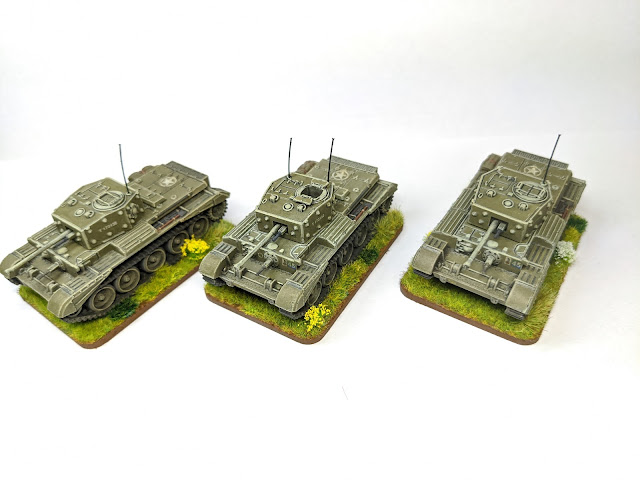 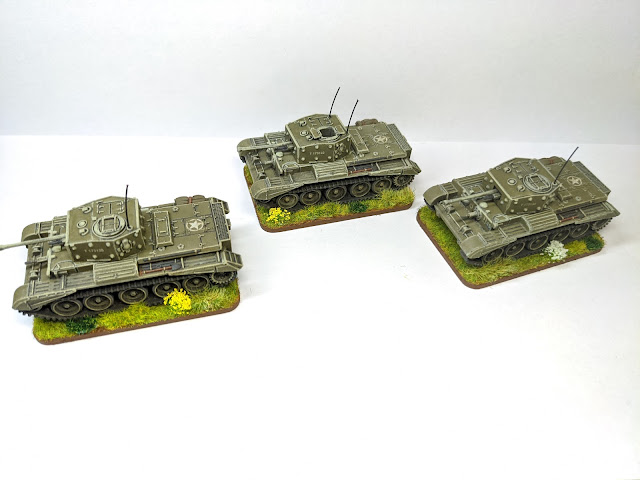 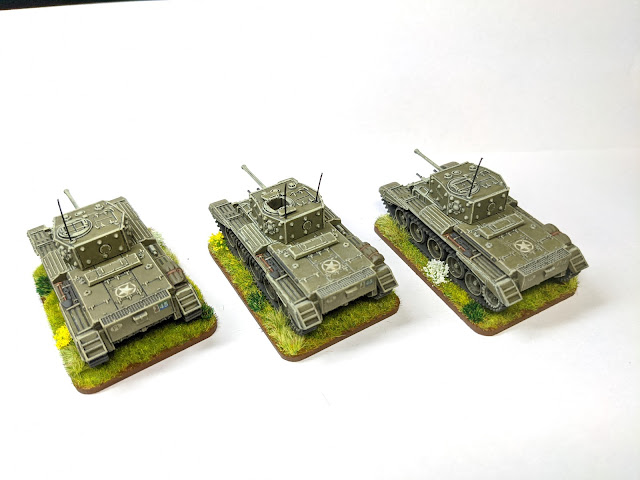 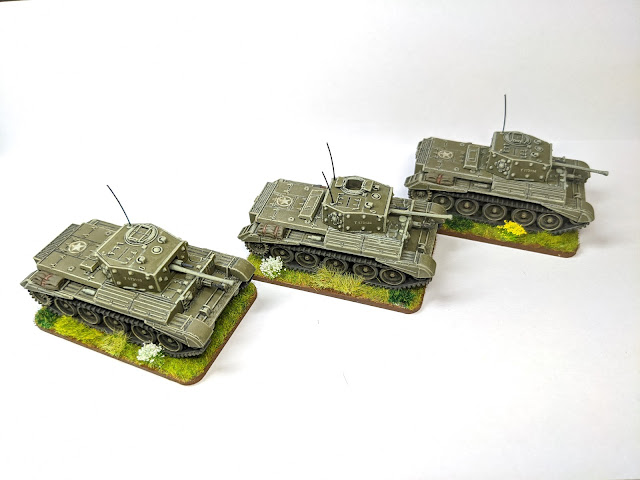 In keeping with previous project posts, here is the painting plan with the most recent changes marked: 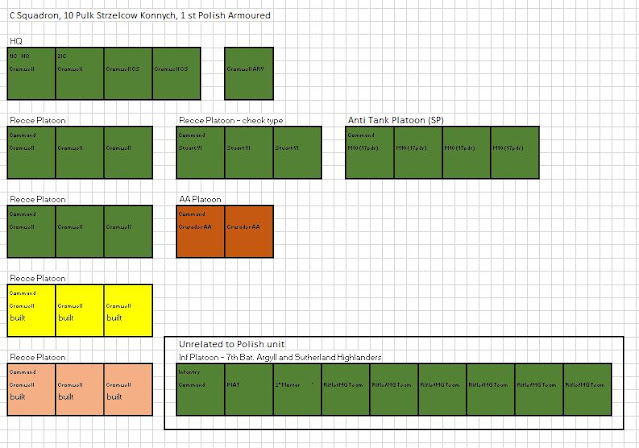 It's nice to be able to track myself crawling towards completion. I'm finding that the much more limited free time I have is focusing me a bit more. I'm not going to claim that I'm getting more done, by any means, but I feel like I spent a lot less time messing on with things and more time concentrating on using my time efficiently. If only I could do the same thing in my actual work...

I'm also at the stage where I am thinking about what come next. There are a few different things tickling my fancy, but one of the main things will be to revisit a previous project - my 24th Polish Lancers: 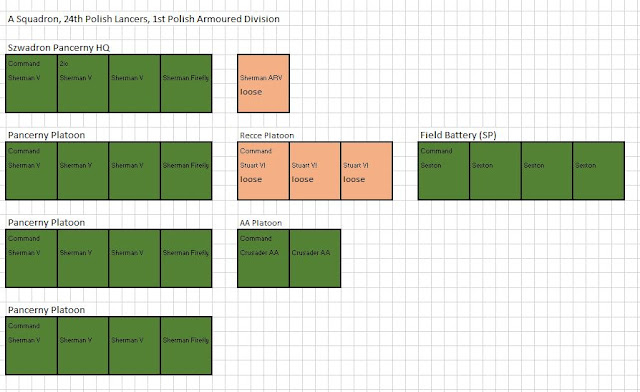 I'd previously painted three Stuarts for this list, before realising the Poles used the Stuart VI not the Stuart V's I'd painted. So I gained my first Canadian tanks, and these Poles are still missing their recce section. Revisiting may also be an opportunity to switch to 60x40mm bases on the Sherman tanks, which will free up storage space. Very much an admin job, but one I can achieve fairly quickly.