It feels like these have been work in progress for quite a while, but this week I managed to get the final bits and bobs done! I normally give myself between a week and two weeks to finish a platoon off, but between waiting on decals and health issues (and time sunk into playing the new Battletech PC game) I spent more than 6 weeks on these.

There are a total of ten 15mm scale Plastic Soldier Company Panzer IV (PzKpfw IV Ausf H) models in this batch, painted to represent tanks from the 1st and 2nd 'zug's' of 7. Kompanie, II./SS-Panzer Regiment 12, 12th SS Panzer Division. As per roughly 8 August 1944. Turret numbers for the two platoons are 715 to 719 and 725 to 729, as per the details in 'Waffen-SS Armour in Normandy - The combat history of SS-Panzer Regiment 12 and SS-Panzerjager Abteilung 12, Normday 1944'. 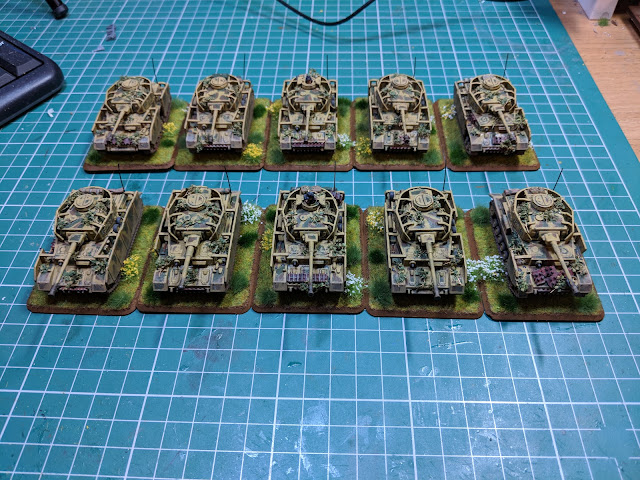 I've organised a force to paint, although I recently picked up another pack of 5 of these which will give me a full company once painted. Two resin and metal Battlefront models provide the HQ unit.

The force is based on the following diary entry:

Of note is the fact that 8 Tigers set out with them - within 6 hours, 1 had broken down before reaching the combat area and 5 were destroyed by allied forces within a few minutes - including Wittmann's Tiger. Three of these Tigers were likely destroyed by a single Firefly from the Northamptonshire Yeomanry (33rd Armoured Brigade) firing at around 800 meters, with the two others (probably including Wittmann) likely falling to the guns of The Sherbrooke Fusiliers (2nd Canadian Armoured Brigade) firing from a concealed position 450 meters away on the flank. Although tanks from B Squadron, 144 RAC also claimed one Tiger kill firing from the North of the Tigers position, while two other Canadian Fireflies fired from the North West... And at no point in the various versions of Wittmann's demise are the presence of so many Panzer IV's mentioned...

Also of note is the fact that the diary entry mentions no inclusion of Jadgpanzer IV's from SS-Panzerjaeger Abteilung 12, although that units diary entry states it was involved and eyewitness Canadian testimony states that two Jagdpanzers were knocked out on the Caen-Falaise road itself by the Sherbrookes.

Anyway, some better shots of each Zug: 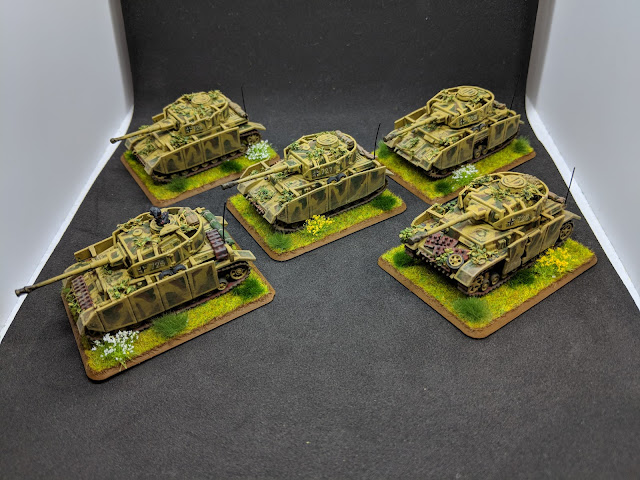 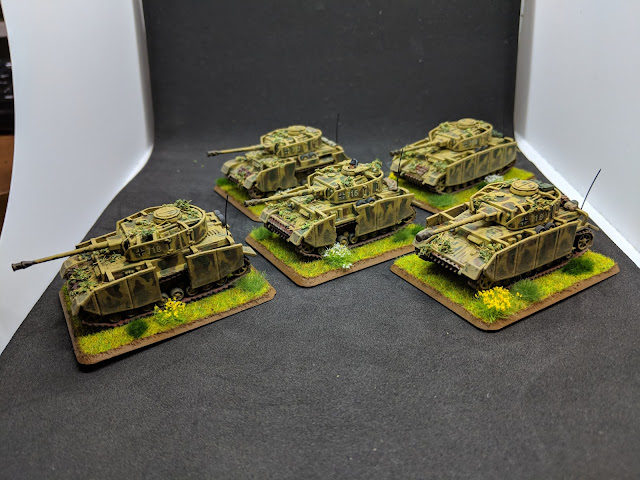 And some individual shots: 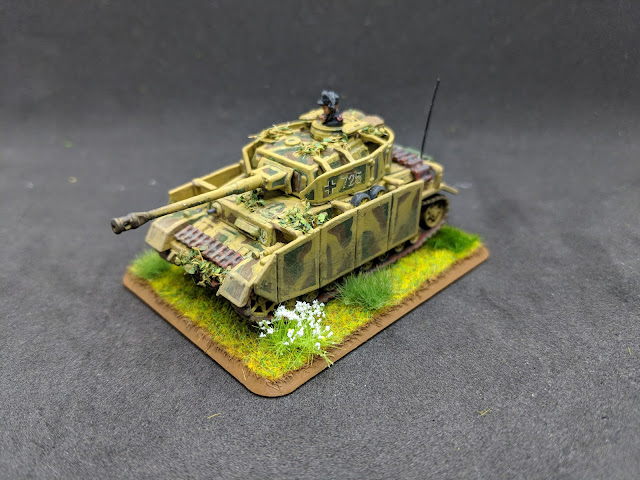 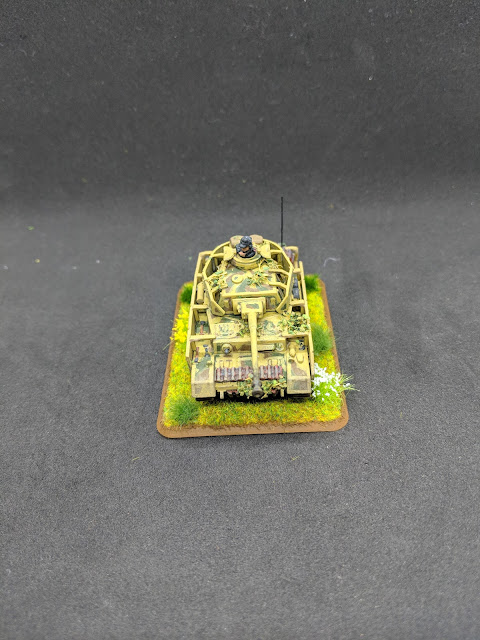 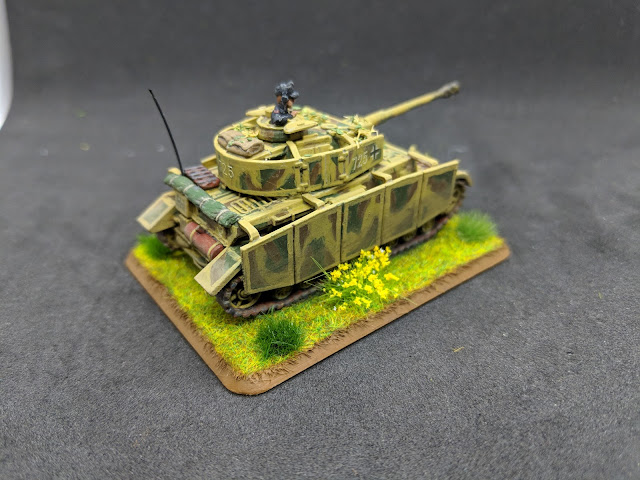 I'm not too pleased with the decals, but there are limited options for turret numbers in these ranges. My Doms Decals are for lower numbered Kompanies and the individual tank numbers don't include any 7's. I had thought about overpainting to make them a bit darker, but my hand painting it not neat enough. I may revisit in the future if I get round to printing my own decals properly!

Next up the two HQ tanks (giving me the 12 7. Kompanie tanks) and a couple of Flakpanzer's. Hopefully these will be a bit quicker to finish!
Posted by James MacCraggs at 22:43:00 11 comments:

Not a huge amount to report on for this weeks efforts. While I have progressed my german tanks - they now have decals and radio aerials - I've still not actually finished anything!

I thought I'd post a bit about last weeks gaming club effort. The Old Guard Wargames Club met in Northallerton last Sunday, and myself and Dave played some 6mm Team Yankee games. 3 to be precise!

The other club members were playing a home brew rules set, which was set in the French and Indian Wars (I think!). Possibly AWI.

The Team Yankee game was the 3rd in the series of scenarios from the Iron Maiden book, and sets Brits against Russians. In the first game, I played the Brits. The scenario has the initial British deployment as being pretty limited, with only an infantry platoon, artillery, Chieftan troop and Swingfires available, one of which can be in ambush. The rest of the British force is in immediate reserves and come on through the course of the game. The Russians, on the other hand, start with their whole force on the table. Which includes Hinds and fast air... Note the lack of British AA! 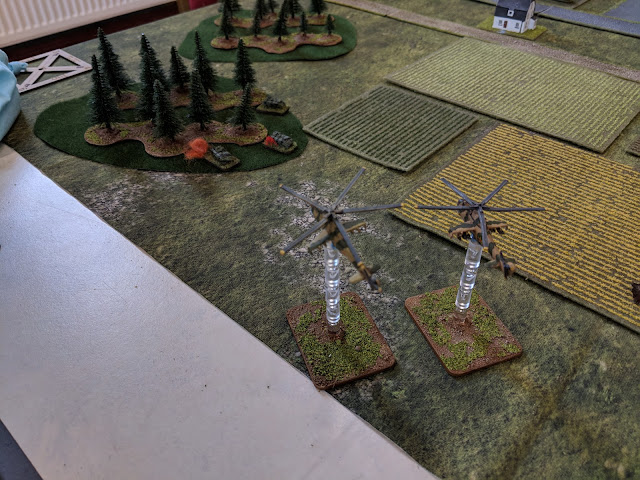 After the first British win, we switched sides, with me as the Russians. I decided to put everything down the one flank. I think this might be the only way the Russians can win the game. While drawing the game would be easy for them, I was aiming for a win. As it turned out, I should just have kept dashing and got to knife fighting range...


The 3rd game, I didn't take any pictures of. But I kept with the Russians and went down the covered approach on the Russian right. Similar results, getting shot to bits without making any progress! A very tough scenario for the Russians to win. To draw however, they just have to have a unit in the British half of the table in turn 6, which would be easy to do as the infantry could hole up in a forest and the Brits would struggle to shift them.

The other chaps had a big table set up, and I think they got two turns in: 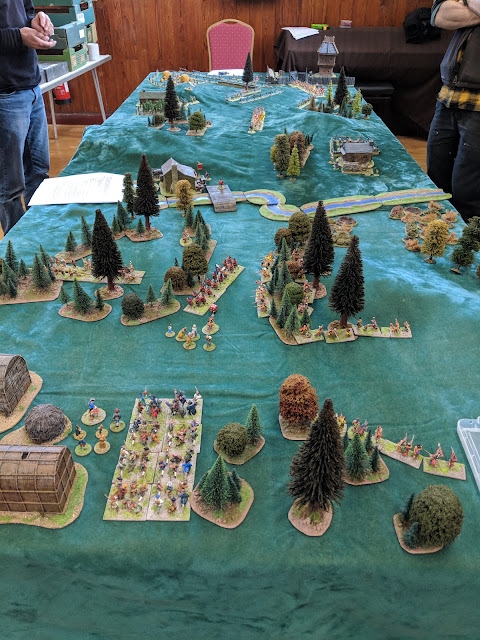 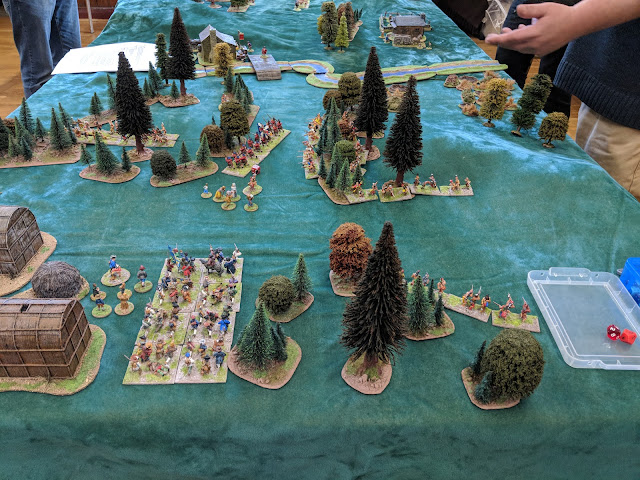 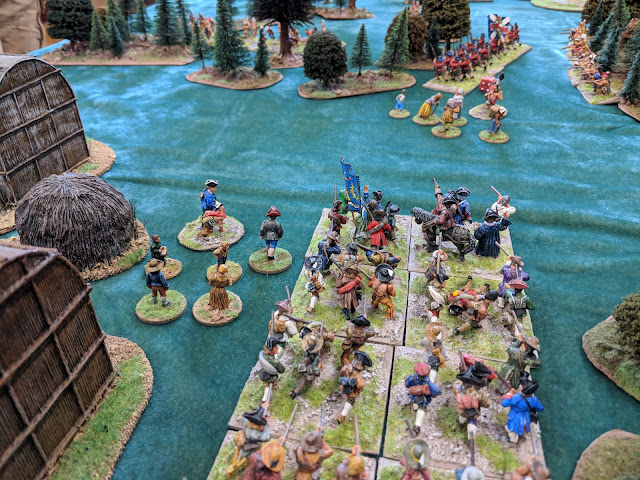 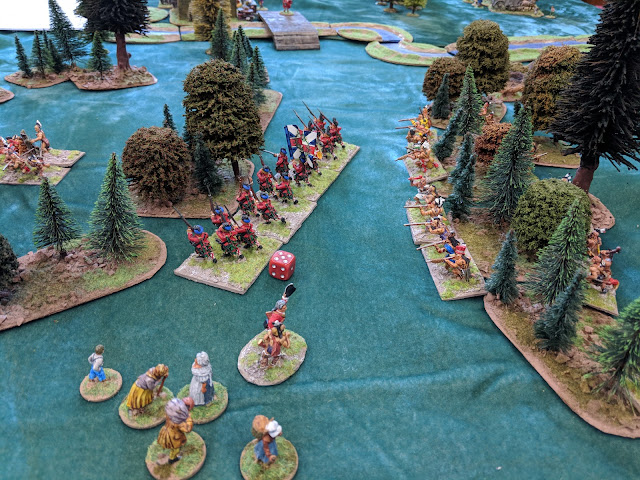 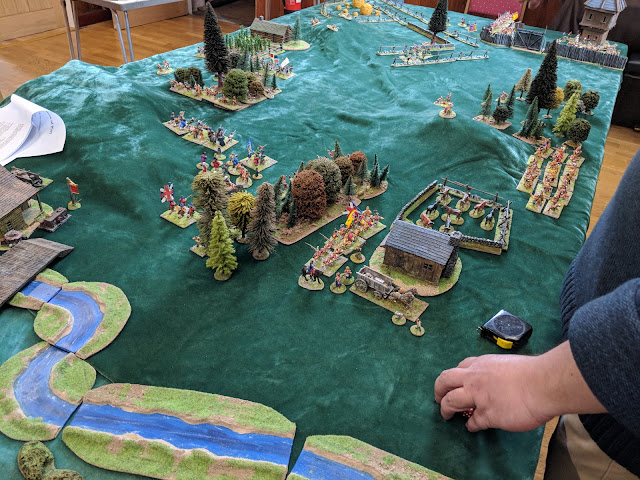 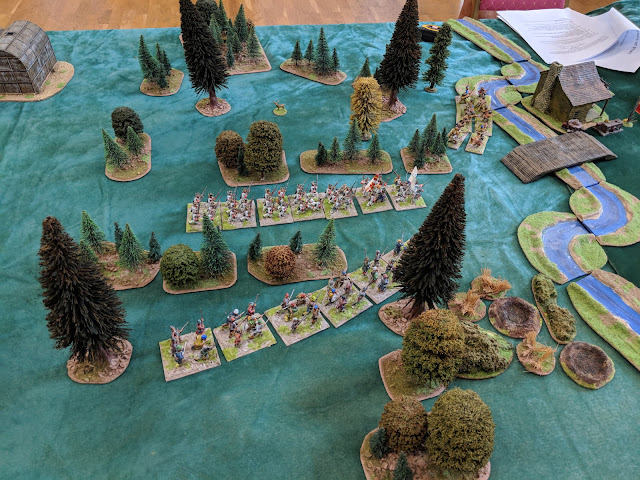 Ok, so I've not been very good at keeping the blog updated over the last few weeks. Mainly because the shoulder issue stopped me working for a week or so before it cleared up as quickly as it came. But that temporary stop, combined with the slow progress on the Panzer IV's and the release of the Battletech PC game, led me to slow to a crawl hobby wise.

Thankfully, I've now made some progress and have pictures to prove it! 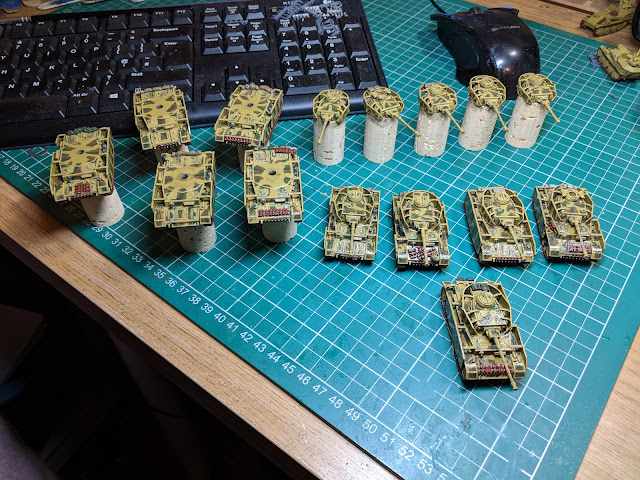 Just waiting on the gloss drying on the 2nd lot of 5, then I can start thinking about decals and worrying about sorting bases!

I also assembled the Chaos cultist gang I had been thinking about. Still a few more bits to get (need some models to use as chaos spawn for when the rituals go wrong and a chap with a heavy weapon of some description), but I'm making progress! 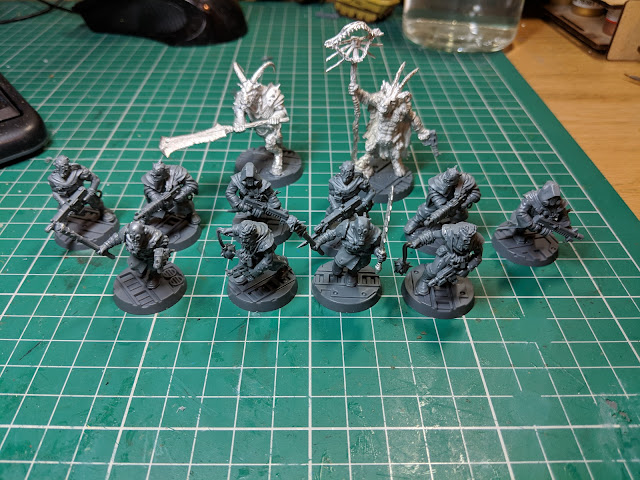 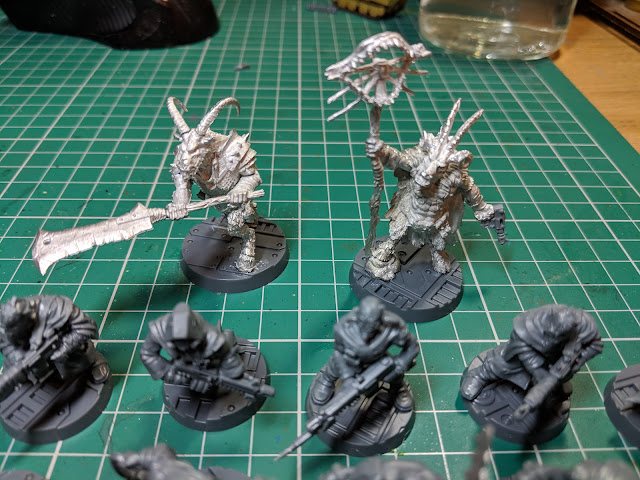 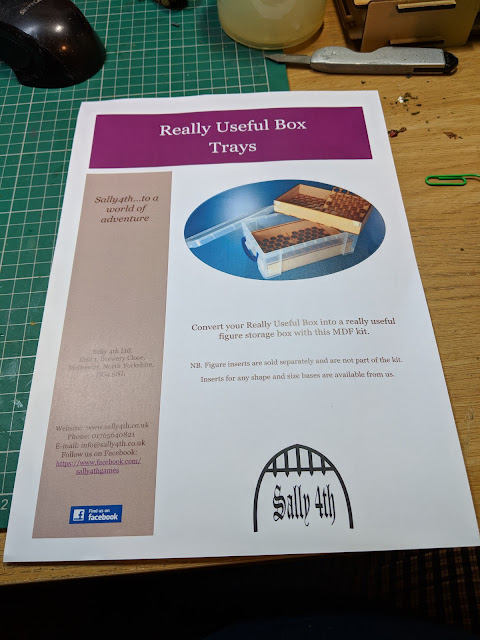 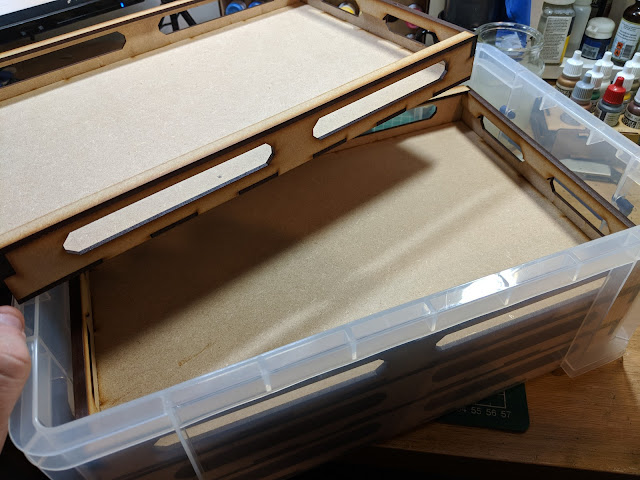 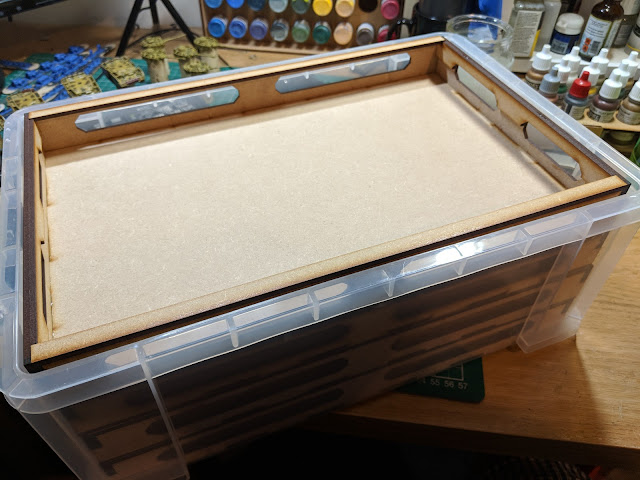 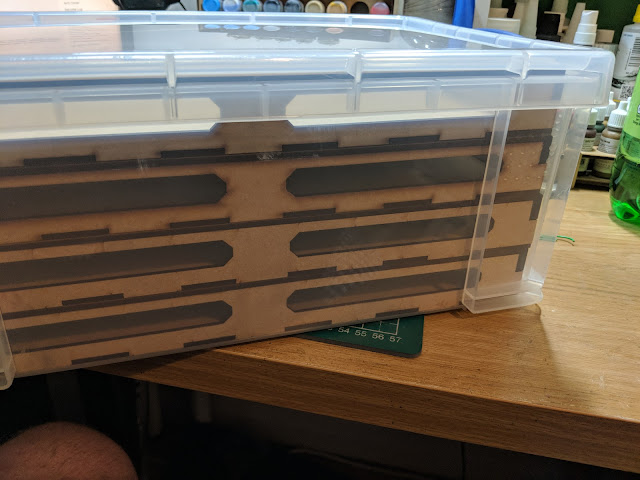 This is a 9L RUB, which holds 4 of the 35mm tall trays. For me, this means I can free up 4 boxes worth of FoW infantry (which includes a lot of wasted height in each box) and combine them into one single box with a lot less wasted space. My other boxes can then be used for taller models, like artillery and vehicles.