For Joshua - First knights and a Dragon

A little more progress this week. I'm currently still enjoying the ease of painting the 10mm stuff and the fact I can be a little less strict with myself. These are also the first models I've done where the basing is not as much effort as painting the models. Both sets are from Magister Militums 10mm range.

First up, some knights. But not just any knights. These are the 'Queensguard', a unit of specially selected female knights who have been tasked by the queen to look after the king. To help with this task, they have been mounted on Megacerops (a cross between a horse like creature and a Rhino). The idea being that if the king needs help, nothing will stop these gals. 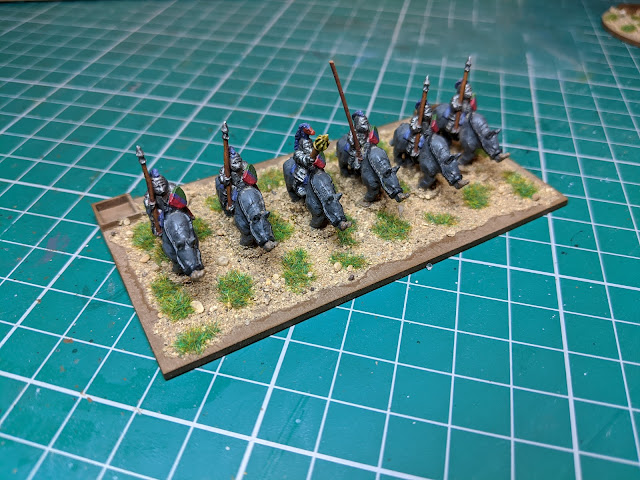 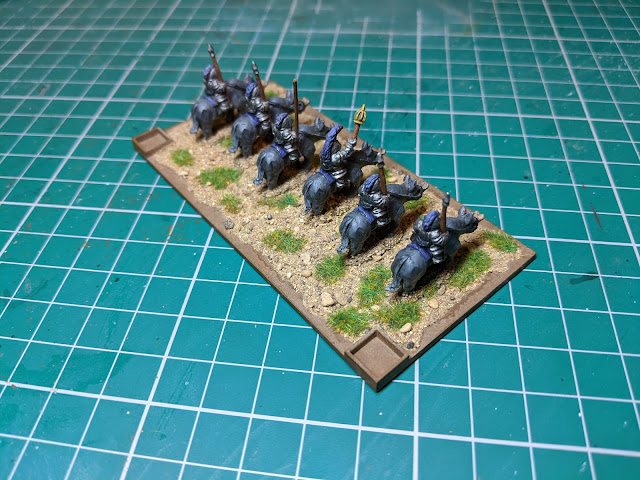 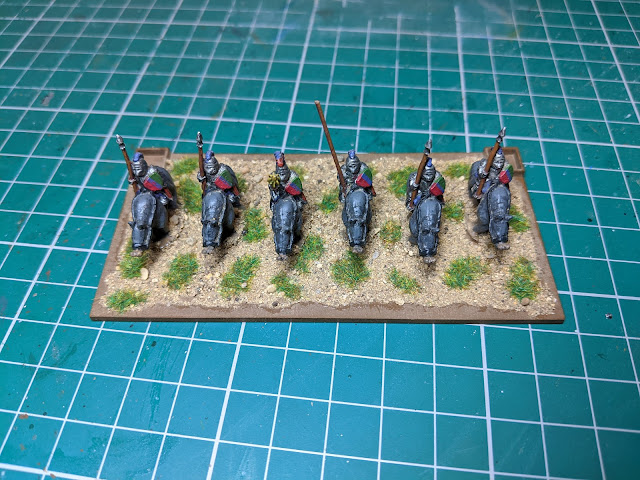 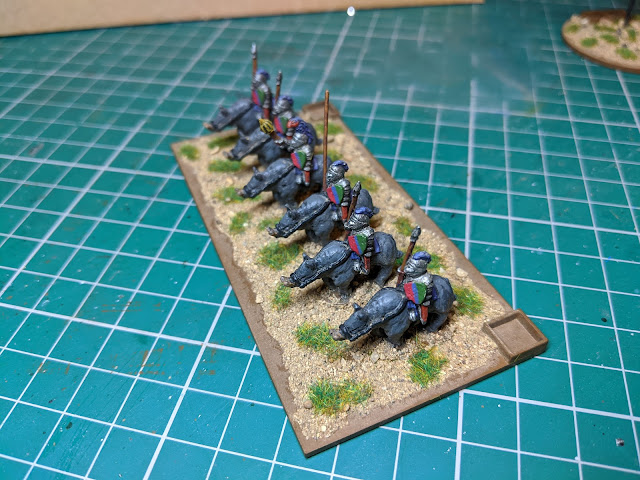 Their colours include purple (picked by Amy) while their shields have the kings colours and a stripe of purple.

In opposition, we have a big bad for my Bad guys. Specifically some wizard like figure on a bone dragon. This may end up being the leader of the evil army! 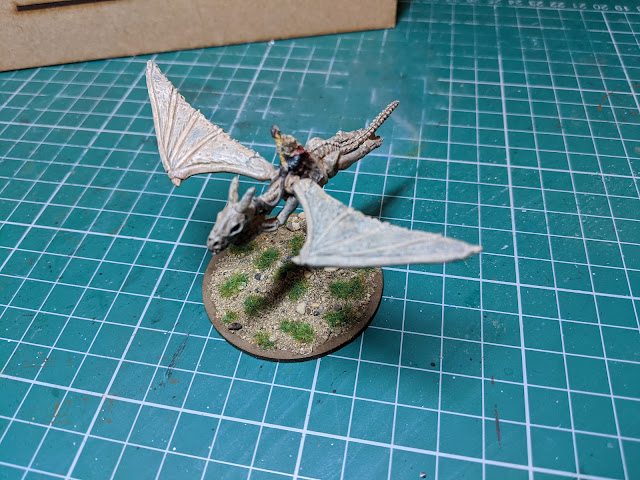 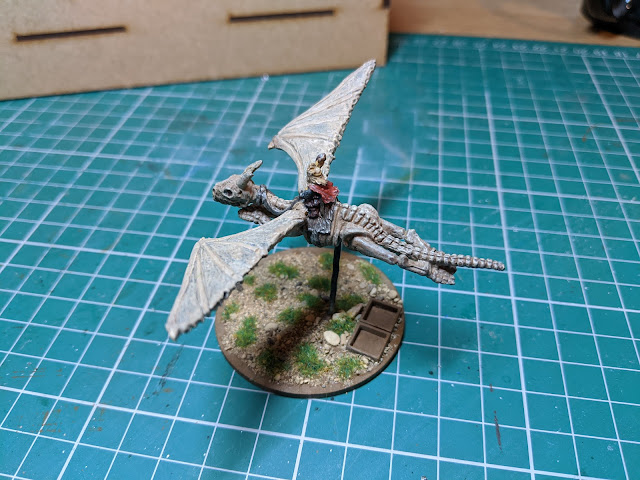 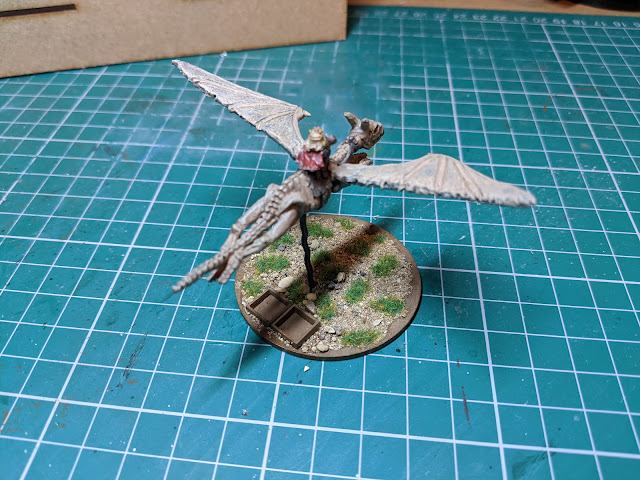 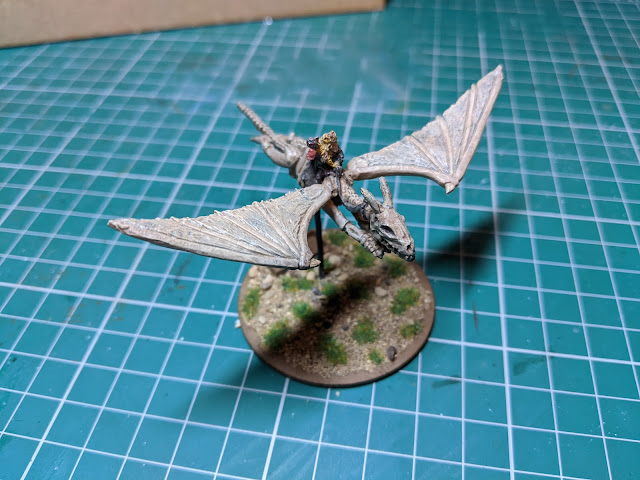 This guy was big enough to warrant a 50mm base. So far, the only flying unit in the undead armies. 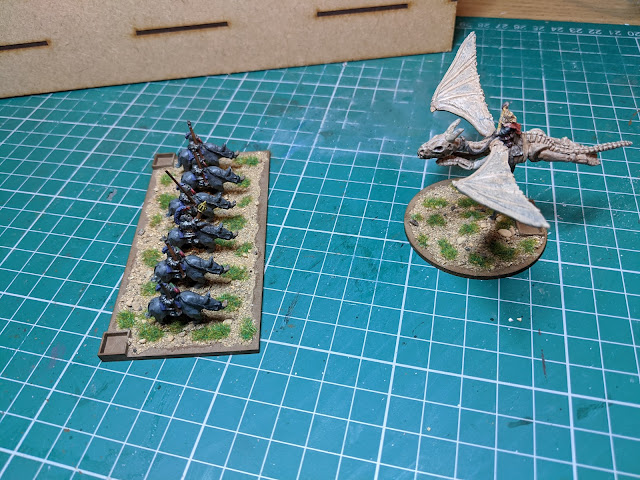 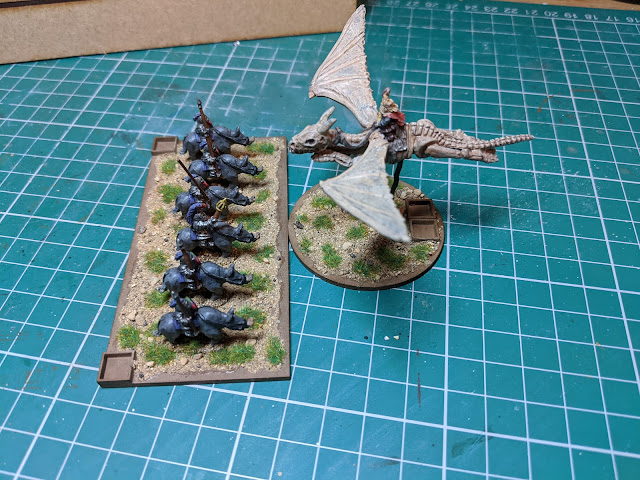 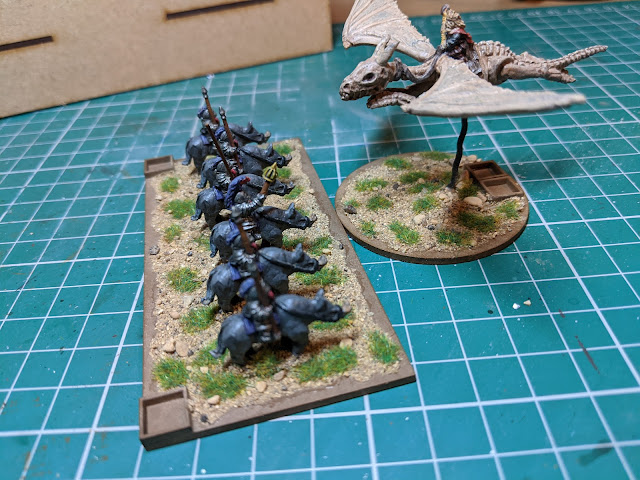 So more knights in the painting queue. Also, a load of 15mm sci fi which I plan to give a similar quick paint job.

Off tomorrow to the Stockton-on-Tees wargame show (Battleground), which should be a decent few hours and some shopping.
Posted by James MacCraggs at 00:29:00 4 comments:

Over the course of this week I've worked on my first few skelly units for the baddies. These are very much the prototype units for the project.

Just as a recap for those new to the blog, these models are for a charity project I am undertaking in order to raise funds for two local organisations who helped my family recently following the loss of our son Joshua at 34 weeks. More information can be found here and here, or on my youtube video on the subject. 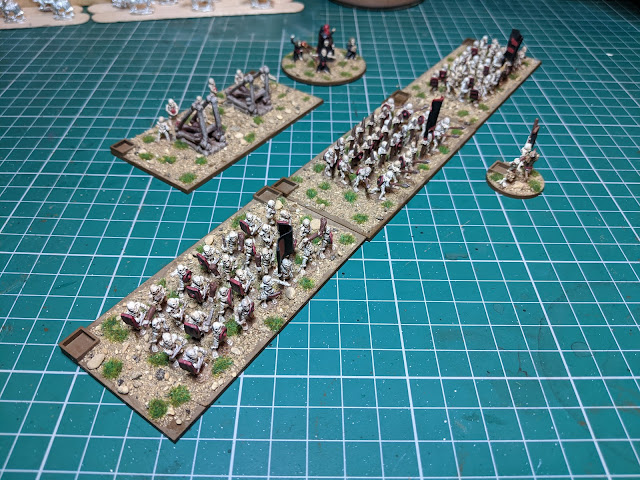 For basing, I went for as simple an option as possible. A little checking about online and in the Pendraken 'Warband' rule book, and I decided to go for some mixed courseness sand and a few patches of 'summer' grass.

The 100mm by 50mm bases had some blotz dice holders added at the rear corners (just in case, we are planning on using various rules so I thought the holders might be useful). I painted the whole base my usual basing colour (Vallejo Flat Earth), put the models on the bases and then added the sand via PVA. The idea was that the sand would prevent a need for the bases being painted.

I then added 'random' patches of 'Summer' 2mm static grass. Nice and quick (relatively) and easily repeatable. Lessons learnt include that the larger stones tend to come out first when pouring sand, so aim away until this calms down. 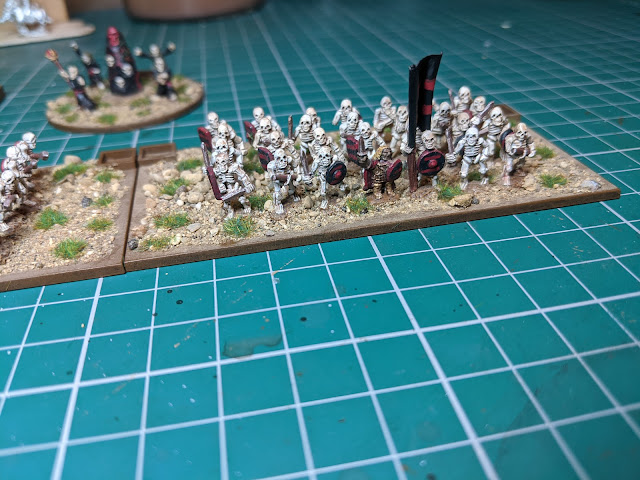 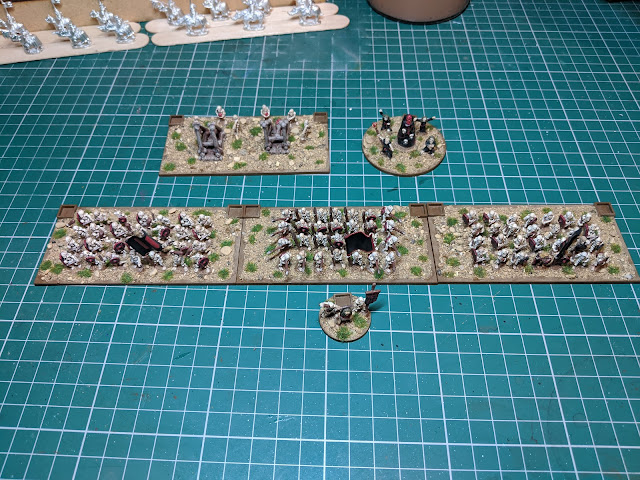 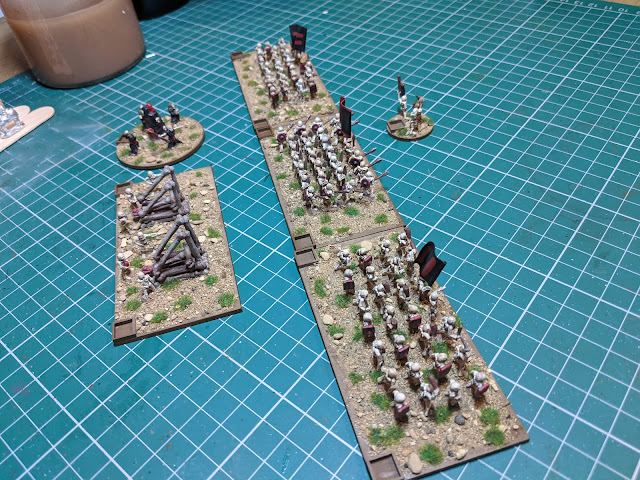 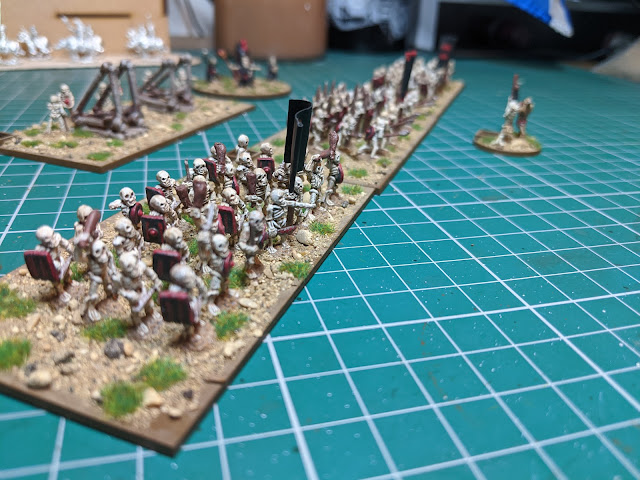 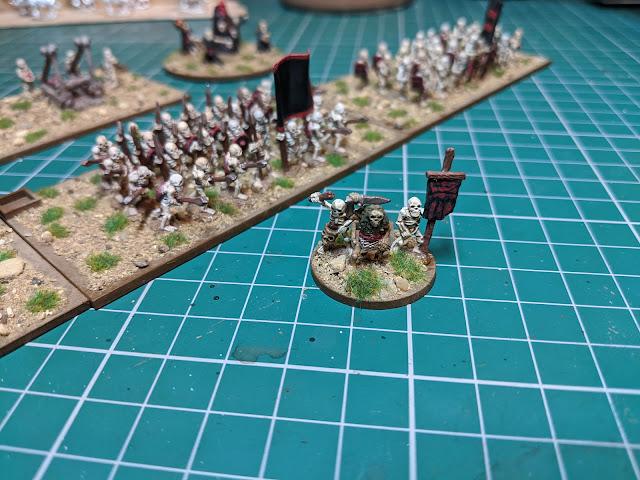 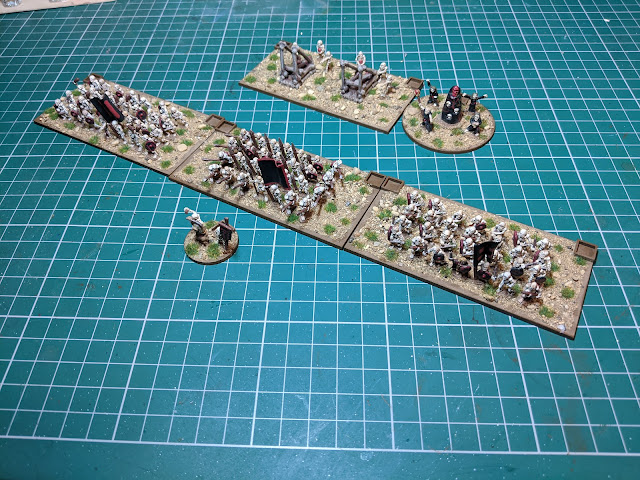 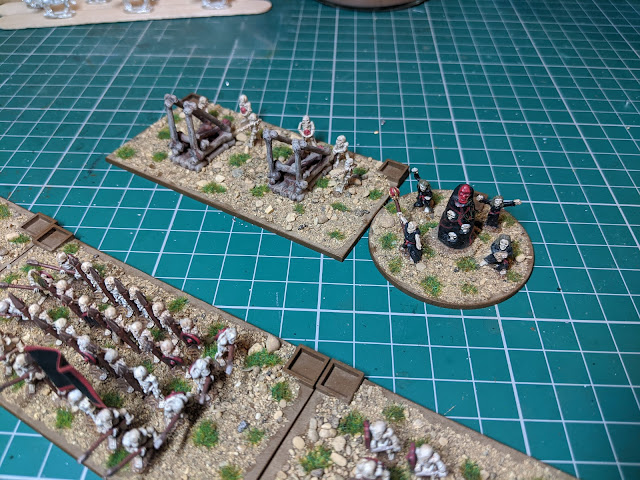 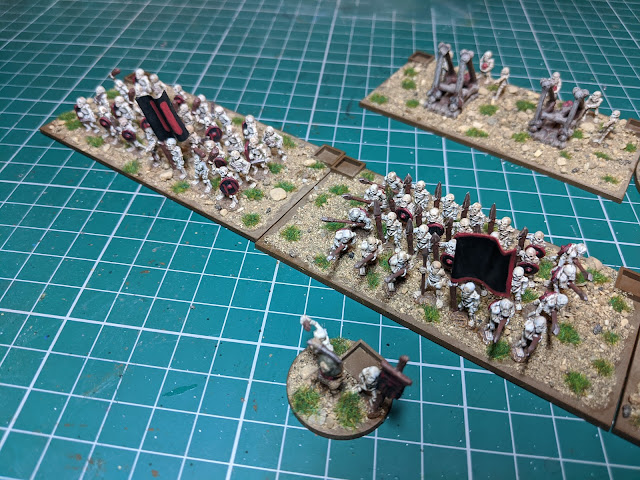 The vast majority of these models are from Pendraken, with a single Magister Militum 10mm figure leading one of the regiments. As previously mentioned, I deliberately concentrated on having two units of melee skellies and one of spears, using the Army Pack. Melee units were bulked out by the leftover spearmen (with spearheads snipped off) as well as some of the catapult crews.

Flags were added via simple conversions of spear holding skellies using paperclip wire. The patterns painted on the flags roughly match those of the units shields. I used just regular paper for the flags, painted.

On the painting table, I am preparing the first of the knights along with some 15mm sci-fi models I plan to add in when I need a change of pace. I've also registered for this years AHPC challenge, in an effort to keep up my focus over the winter.

I'm thinking that units of knights might be slower going, as I am unsure as to how uniform to make them, but time will tell.

For Joshua - Some progress

I've been working hard to get past my usual indecision inaction when it comes to painting new models and started to progress the first of the undead units for my 10mm fantasy project.

These are 10mm Pendraken skellies, from the undead army pack they donated to the cause. I had initially primed these figures grey, before giving them a coat of Vallejo Ivory (from a bottle so old the number has been worn off). Each unit is 28 figures strong (4 ranks of 7 models each).

I then blocked in the other colours. Shields in black with some red unit markings, weapons a mix of Hull Red and metallic (steel), clubs and spears Mahogany Brown. 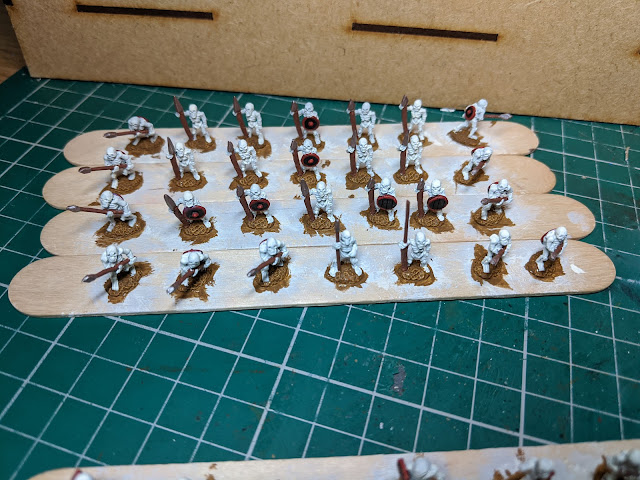 What I did do with the army pack was break up the warrior skellies into three units. One with spears and two with hand weapons. The spearmen I used a bit of brute strength and ignorance one - pushing the upright spears closer to bodies in order to make them more upright. I also took three spearmen and turned them into standard bearers by chopping off the spear tip, drilling and adding in a length of paperclip. The paperclip section will be hidden when I later add simple black flags.

For the 2nd hand weapon unit, I was running out of figures, so some leftover spearmen were used with the spear tips chopped off (to make mauls or clubs). I had to also add in some of the catapault crewmen and another figure from my human models (painted to look like a revenant or some sort of armour wearing ghoul) as a unit leader. A couple of figures lost arms and the likes while I was messing with poses - I just stuck them in. Possibly the bodies were missing those bones when they were dug up...

Units were arranged on their bases in ranks, and then each rank transferred to a stick for painting.

Once all the details were blocked in, a transformative 'soft tone' wash (armypainter) was added.

The wash over the basic white gave a really nice effect. In fact, I'm not sure I'm going to do much more to these figures in the way of highlights. 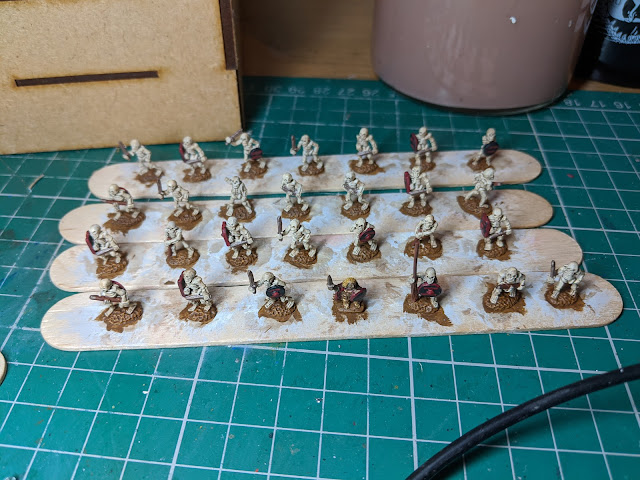 The figures look a lot brighter on camera than they do 'in the flesh'. This is the revenant led unit.

I also got the characters from the army pack painted, which will form one 50mm round with the evil rock and summoners, and a 25mm round with a skellie hero, standard bearer and drummer. Another 50mm by 100mm base will have the two catapults.

I've another army pack on order (along with some chariots and ballista), which should allow me to get a full unit of archers, with the crossbow armed skellies going to form some skirmish bases. More skellie archers may be required, but the baddies will no doubt be getting other ranged support from elsewhere (I hope!). The current plan is archers will be in two ranks rather than 4.

I just need to sort basing out for these painted guys, do some standards and think about how I'm going to paint knights...

As ever, thanks for all the messages of support and offers of help. The more the merrier, so if anyone fancies contributing a unit to the charity project, please drop me a line (ForJoshuasArmy@gmail.com)!
Posted by James MacCraggs at 12:40:00 7 comments:

Not much blog posting recently, though I have made some progress towards the fantasy charity project. I've managed to clean up all the models which I had ordered, and sorted some of the Undead figures into units. 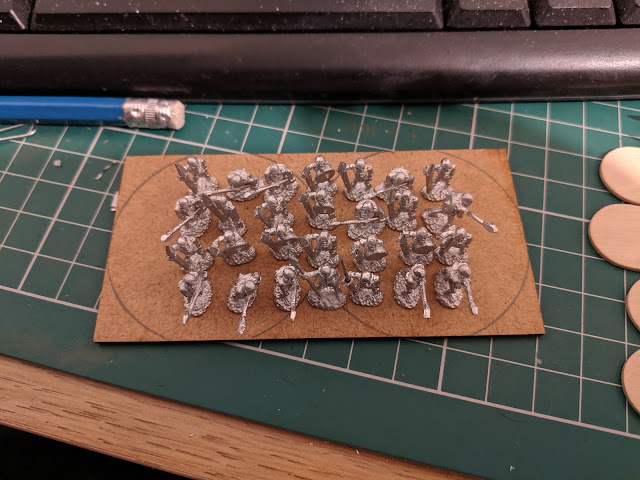 I've decided to go with foot units which consist of four ranks of 7 models. Ranged units will be in two ranks to make them obvious on the table.

So far I have prepped and basecoated a unit of undead spear and two of hand weapons, as well as the catapults and hero models.

My aim is to progress these in order to have some examples done.

In other news, myself, Dave and Martin had a bit of a jaunt off to Paris with a portion of Dave's Sudan collection which was being used to film a documentary. I won't go into the ins and outs of it, but it was a proper studio and a lot more work than we anticipated. Very interesting, if exhausting.

Some pictures I took over the course of the two days: 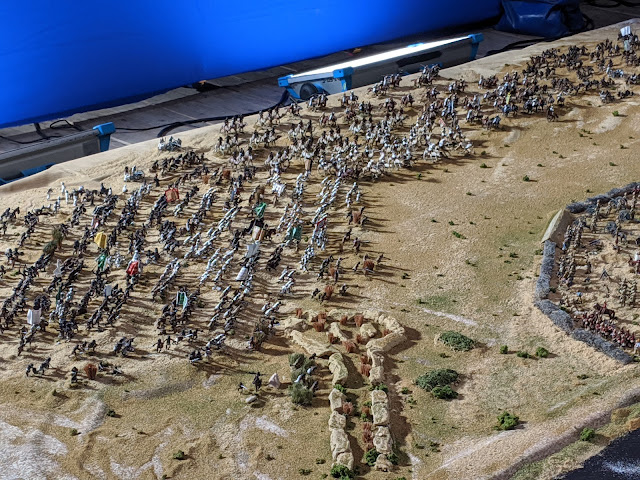 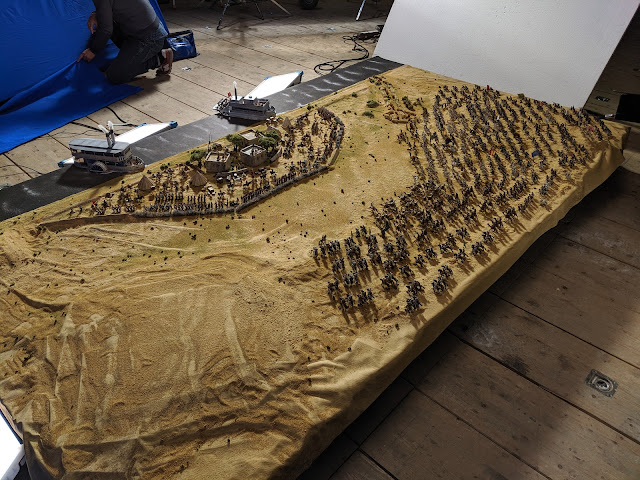 All in all it was a interesting experience... but hard work. Definately more involved than we imagined it would be. Definately a good run out for some of Dave collection!
Posted by James MacCraggs at 01:03:00 10 comments: