Alongside my 3mm Cold War project, I'm trying to decide which way to go for a 6mm Team Yankee force.

Currently, I would love to go for GHQ - who's models are stunning but pricey. Still cheaper than buying 15mm models, but expensive for the size! Other options are Heroics and Ross or Scotia.

I've seen a lot of mixed reviews about both of these manufacturers, so decided to invest a small amount in samples from both. So I picked up most of the 'core' vehicles from each manufacturer. I figured others might find these pictures useful. First up we have the M1.

I actually have a single M1A1(?) Abrams from GHQ to show with the two 'slick' M1's from H&R and Scotia. In these pictures the order is: GHQ, H&R, Scotia - unless otherwise stated.

My own thoughts were than I prefer the Scotia sculpt. Slightly more detail on the hull, better looking tracks and while the turret is smaller it looks better proportioned. the MG's are also included on the turret.

Next up, T72. No GHQ comparison for this one:

The Scotia T-72 is much better both is size and quality. You can see a real different when comparing them to the M1. I know the T-72 is supposed to be smaller, but the H&R one is much much smaller.

Then BMP1's and M113's and M901's. The major difference is that the 'Hammerhead' turret is separate on the H&R model.:


The Scotia BMP1 is much nicer, and has a pose-able turret. The turret also seems to sit in the correct position on the vehicle, with the H&R sculpt turret being too far forward.

The Scotia M113 is not as tall and a little wider - it reminds me much more of a Space Marine Rhino.... which probably means it's closer to an actual M113.
My own preference is for the Scotia one here, the detail on the turret is better, even although it is cast onto the model.

I also got a Mi-24 Hind, although I think in this case the H&R helicopter is better. The H&R A-10 is also nice, but Scotia does not seem to do any. The decision on whether to go for GHQ is a big one. The difference in price is £8.40 for 5 tanks compared to £2.50 for 5... The argument is really over the quality versus the cost! At the same time, H&R Helicopters and Aircraft may be the way to go.

I also picked up some H&R 6mm Infantry, which were lovely models. I'll be going with their infantry packs when I do got for 6mm. I've already got some half size MDF bases which should translate into 6mm without any problems.

So with me dipping my toes into Team Yankee - although not in 15mm, check out this video I made yesterday here detailing a quick game of 3mm Team Yankee:


Anyway, with my interest in the game, I decided to pick up the Team Yankee: Afghansty. Having checked prices and such, I was tempted to get the digital copy on my Ipad and then order the printed cards. However I also checked the Flames of War online store - and the printed copy with cards was actually cheaper with free postage than the Ipad version.

The book arrived within a couple of days, and included the unit cards.

The book itself is only 12 pages (including the back page) and includes:

A page briefly detailing Soviet involvement in Afghanistan and the VDV as well as Soviet Air Assault tactics and how they would be Incorporated in a 'hot' war in Europe.

Basically, the way the army list works is that it is assumed the troops have already been dropped on the objective, and the aim of the NATO troops is to smash the VDV forces before the 'Main Body' of Soviet troops can reach and relieve them. As such, the army does not include enough helicopters to transport the whole army!

The base Air Assault list is A Battalion HQ with a min of two (max of three) Air Assault Companies and a similar number of Hind Helicopter Companies (with 4 helicopters in each).

Air Assault Infantry companies have the same weapon options as Motor Rifle companies, but seem to be slightly better in close combat, with a Skill of 4+ and Assault of 4+ (as opposed to 5+ for the MR company), counter attacking on a 3+ (the same as a MR company). The company does have the option to take some different heavy weapon upgrades. These include AGS-17 teams (Automatic Grenade Launchers) with a RoF of 9 halted and 3 moving, AT3 and FP6. As well as AT-4 Spigot ATGW teams (RoF 3 Halted, AT19 and FP3+).

Beyond this, the rest of the army list (support options) are the same as those for the army list in the main Team Yankee rule book.

The booklet gives a short painting and basing guide:

The cards seem to be decent quality and include:

The Brigade force card has on the back of it a list of the various special orders that all units can be issued (I've no idea if other TY cards have the same).

Overall I was happy with the quality of the product and the delivery time. I do feel that it's perhaps not worth £8 - I think £6 would have been a more reasonable price for what you get.

The army list doesn't seem to be hugely different from the main Motor Rifle lists, although there is the option for a lot more helicopters. I suppose it may signal the way Battlefront want to approach the introduction of new armies. Only a single blister of VDV heavy weapons needed to be produced for this list to work. Similarly, how much would be required to do a US Armoured Cav list or other similar divergent list from the main ones.

For my own projects, this army should be easy to do with both 3mm and 6mm troops!

In August last year, before my big move and my discovery of the Paint and Chats, I had done a video and some pics and a video of my British 15mm Flames of War collection.

With all the painting I've done in the last 8 months, I've had a lot of comments made about the size of the collection now, and requests to see the whole lot again. It's taken a while (the joys of living in someone elses house) but I've had a few days to myself and managed to lay the whole lot out.

I've made a video of this layout, with me droning on a little bit.


But I also took a load of pics, as I know not everyone likes YouTube videos and the quality can be a bit poor (especially with me holding the camera!).

So, here is what I had done up till August last year - this is A Coy, 7th Battalion Argyll and Sutherland Highlanders, 51st Highland Division and 144th Regiment Royal Armoured Corps, 33rd Independent Armoured Brigade in early August (7th and 8th) 1944 - plus associated support units. 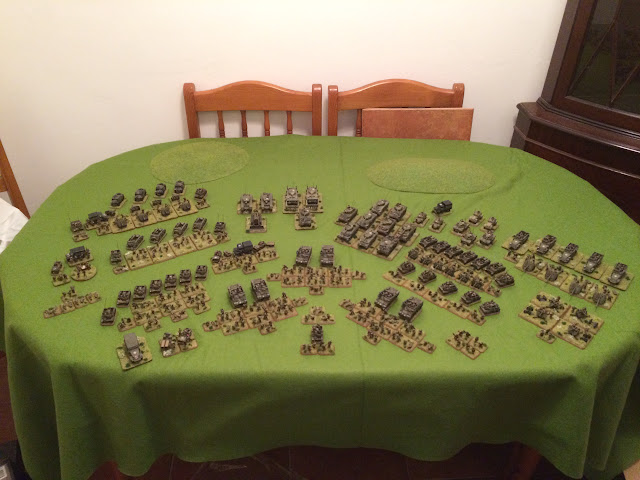 And here is a similar layout for everything done up till June 2016:

I think I may have a problem... much more of this and I will need a bigger table!

Everything here I have detailed individually as I have completed it, but I have taken a load of close up shots as well (apologies for the lighting):

In addition to this little lot, I also did a similar layout and film for my painted German collection. These guys are for 89. Infanterie Division on 7th and 8th of August, 1944.


And pics (again, sorry for quality - some are blurry or dark):

In addition, over the last year, I have painted several Full Thrust ships and a load of 3mm armored vehicles.

So where do I go from here? I've a lot of plans for my 15mm Flames of War project. Specifically expanding my forces to be able to represent other units and nations that took part in the Totalize battle. This includes units I already have models for or are actively purchasing models for:

And units planned/considered but with no purchases being currently made:

This is going to be a mammoth long term project, and involves army list and scenario writing as well as modelling and painting all these forces. Any and all help is appreciated! I'll be posting some blog articles in the future, as well as army lists based on this particular battle. At the same time... I'm going to need a lot more models! Donations or good deals are welcome!
Posted by James MacCraggs at 17:29:00 19 comments: