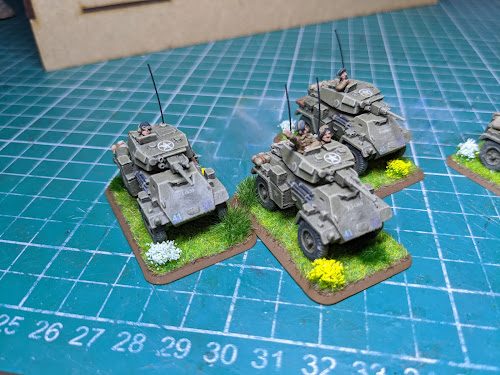 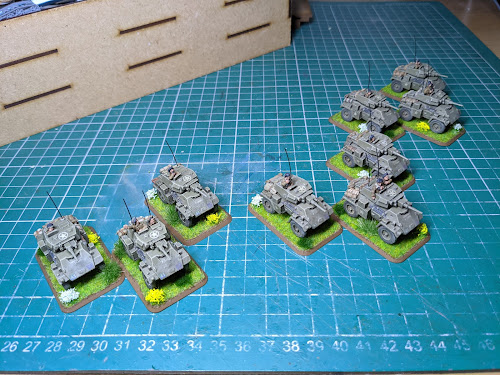 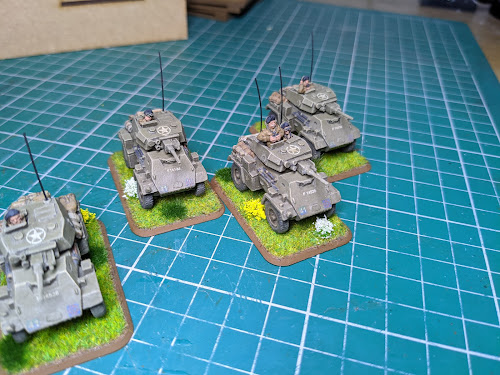 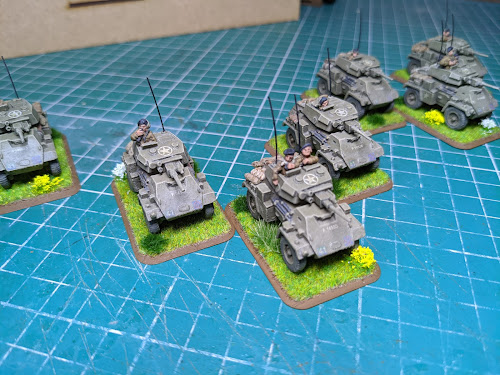 The crew figures as a mix of Skytrex along with some very old and very new Battlefront figures. In line with my other recce models, each vehicle has a single crewman, while command vehicles have two (along with two aerials). This helps mark the command teams during play. Some of the crew are just peeping over the lip of the hatch, while others are sitting higher using radios, etc.
I also added magnetic basing, so these are ready for storage... which I don't have. Primarily because I've filled up what I have either with my 15mm stuff or the 10mm Joshua project. Also because I recently purchased 5 platoons of rather nicely painted British infantry from a friend. Which leaves me one single platoon short of having a full battalion (4 rifle companies of 3 platoons + a support company). The only slight cheat being that some squads are 4 men strong rather than 5. I'll try to get some pictures soon!
Posted by James MacCraggs at 23:53:00 3 comments:

Hi folks,
Still here, still tinkering away with bits and bobs. This week, I finished off a 10mm fantasy unit for my Knight army as part of the 'For Joshua' project. I also based up some of the figures I received recently from 'Domesticated Bill'  (http://dbbrushesmitpb.blogspot.com/). Unfortunately I didn't have enough bases left to get everything he sent done, but more bases are on the way from Pendraken. 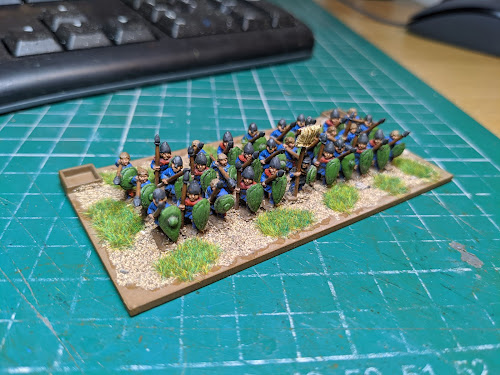 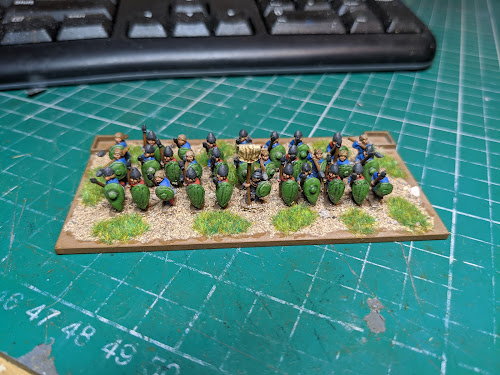 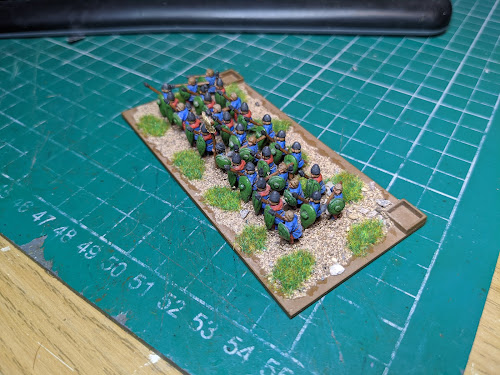 These 10mm spearmen came from Magister Militum - I believe they are 'Utherian Spearmen' although looking at the unit description I seem to have been missing the command figures. Still, nice enough figures to paint, and these will go along with my archers as the peasant levy part of the knight force.
I've still many, many knights to paint for this project, something I'm struggling with at the moment. But I'll prep up the next unit and try and make a start. I suspect the next lot will be rather uniform again, rather than each individual knight having his own colour scheme.
Still blown away by people's generosity for this project. The project itself has been paused due to C-19, but I am hopeful that if the situation improves next year we can get things going again!
Posted by James MacCraggs at 23:41:00 1 comment:

Hi Folks,
A minor update on recent progress. These models should have been accompanied by others, but I had far fewer appropriate bases than I thought, so I'm waiting on a restock.
This squad of 15mm models are Ground Zero Games SG15-A24 NAC "Cataphract" Heavy Power Armour suits (less the backpacks). Bought on a whim as part of my small 15mm sci-fi collection. Truth be told, I am not keen on these models for representing power armour - a little old fashioned for me. However, they'll do as an option for when I eventually do something with the collection. 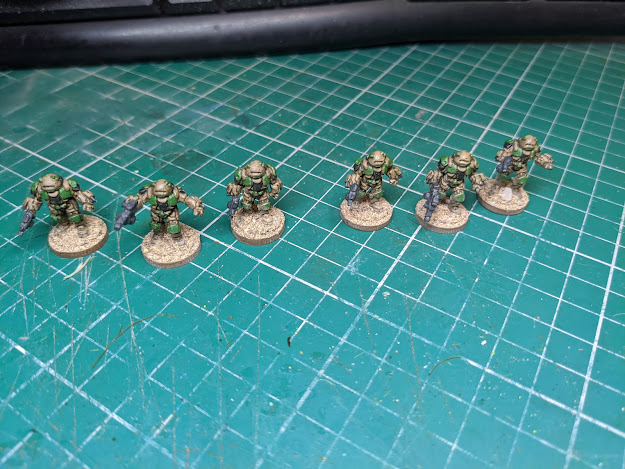 I've gone with a tan colour base, with patches of green and black just to make them a little more military looking. The colours will also allow them to be allied with the security bots I painted before, but should be different enough to also be opposition when required.
I've a whole load of mercenary 'armed colonist' types still to highlight, as well as some power armour from another manufacturer that I dislike. My plan for these other models is to make them basic AI 'wingmen' for the manned suits. Basically fire support drones that will work with the manned suit but try to keep it safe (being the ones to breach doors, shielding the manned suit from fire, etc).
I may keep an eye out for some 15mm heavy power armour suits that I do like... which would probably be more mini-mecha like.
That's it for now, till the bases turn up!
Posted by James MacCraggs at 15:45:00 3 comments:

Hi folks,
As usual, a bit more of a delay between my last post and this one. The sunny weather, my dabbling with other bits and generally my lack of enthusiasm for these models all led to me taking a little longer than expected on these guys.
On the plus side, another unit marked off the painting chart!
These guys are 15mm Plastic Soldier Company 15mm Loyd Carriers and 6-pdr anti-tank guns marked up as a platoon from 2nd Debyshire Yeomanry, 51st Highland Division. 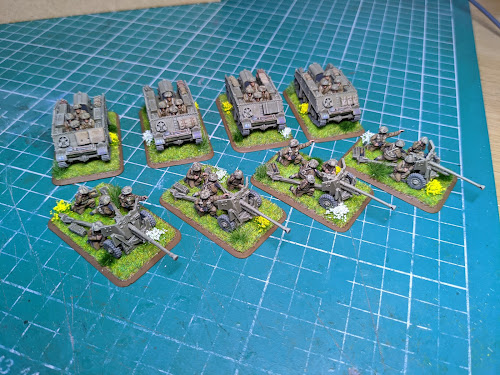 I've used a mix of different stowage options on the Loyd carriers just to individualise them a little. The carriers themselves I had little issue with. They are decent models and I've added them to FoW medium plastic bases which will be magnetised for storage.
My main issue with these models were the guns and gun crew figures. The guns are light and fiddly, and the joint between the gun and trailer is a definite weak point. It was tricky to get the guns to sit with a more flat trajectory without them appearing to break off every time I looked at them. Similarly, the crew figures - while they look decent painted - have no bases. As such, painting them was an issue as they have barely any surface area connecting them to a surface. I fully expect that I am going to lose crew figures from the bases as there is just no decent way of securing them.
The details on the crew were also fairly soft, placement of water bottles on the webbing is wrong on half the models and generally they are nowhere near as nice as metal figures (but we all knew that already). For the price, I suppose they are a good buy. They certainly look like they will fit in with the rest of my collection.
Crew figures for the carriers are very slight, especially compared to the gun crew. 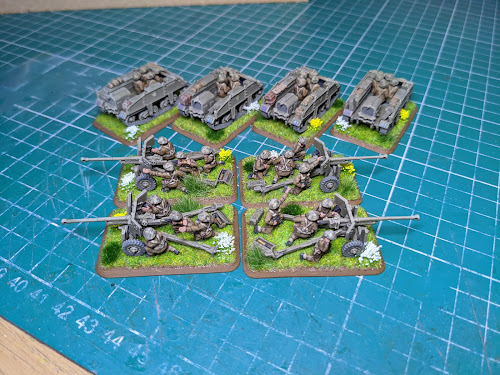 I've used my standard basing technique, but the lack of bases mean the crew figures have just had to be glued directly onto the basing material.
All in all, a useful little 4 gun platoon, which takes my total of (deployed) 6-pdrs up to 10! I'll try to get some pic's of these next to my Battlefront and Forged in Battle Loyds now they are all painted and based.
The painting chart is starting to fill with more green. Part of the delay on these guys has been the work of the crew figures for the armoured cars - which should be done shortly. 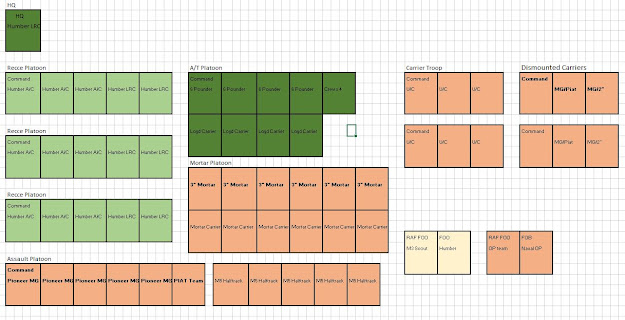 As for other diversions, I was sent some MDF kits to test build. I've been chasing Pendraken for these since before lockdown! Pretty sure Leon was sick of me bugging him about them every few weeks. These are 15mm Redvector kits that Pendraken will hopefully be stocking some time soon.
Posted by James MacCraggs at 17:56:00 6 comments: