So having returned from a week in picturesque Shropshire (near Shrewsbury), I thought I should post a little blog. Mainly so that I will have posted something this month!

Having been a good boy (mostly) I got to go to Shrewsbury Castle (and the Kings Shropshire Light Infantry regimental museum there). I also got to go to the RAF Museum at Cosford.

Along the way there were a couple of interesting book shops - resulting in me getting a great book called "Only the Enemy in Front... (Every Other Beggar Behind)" by Richard Docherty. The book details the wartime history of the Reconnaissance Corps from it's creation through to the corps disbandment in 1946. Aside from the title (which I love) there are some interesting pictures and a lot of detail of the corps actions in all the theaters it fought in.

From the RAF Museum I got a lot of pictures on my phone camera, including these: 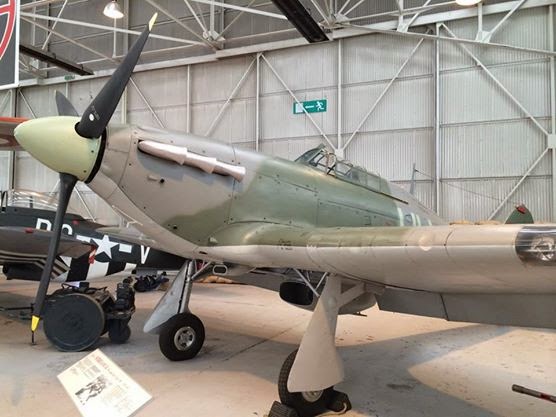 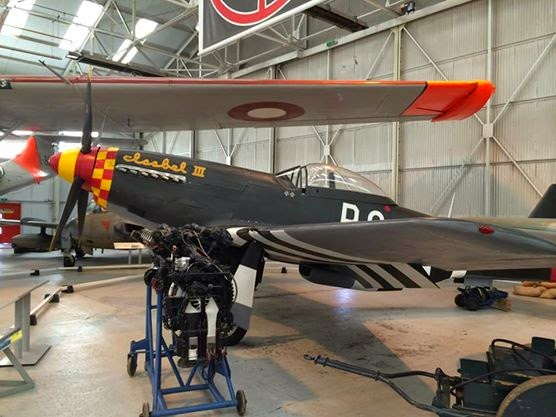 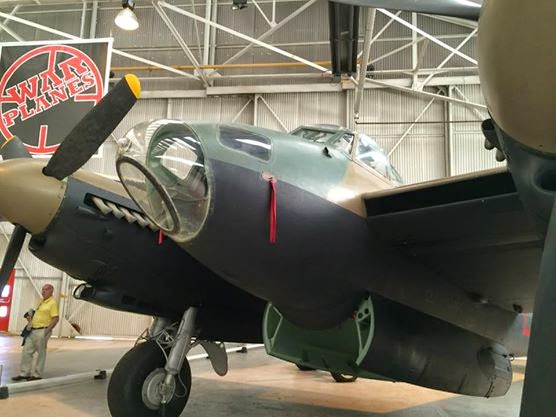 I also picked up a book "The Right of the Line: The Role of the RAF in World War Two" for an impressive £10. Along with this, I got a wonderful framed print (for my up coming birthday):

From the KSLI Museum I took a few pictures - mainly of the WW2 stuff: 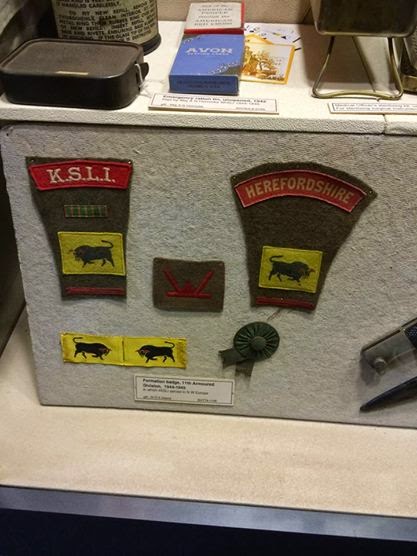 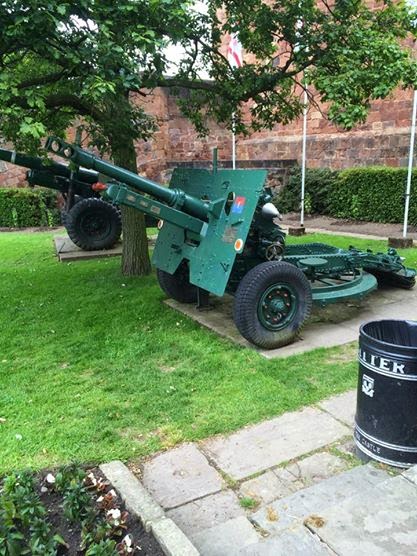 Then, at the end of the week I spotted a odd building beside one of the small local bridges - from the road it looked like a old barn, but from the bridge there was definitely a concrete face with pillbox style windows. Turns out the river formed part of Western Command Stop Line No.1 that followed the course of the River Severn. The bridge also had the remains of roadblocks at both sides of the bridge. More info here. Amazing what you can spot when your out and about!
Posted by James MacCraggs at 21:52:00 4 comments:

Email ThisBlogThis!Share to TwitterShare to FacebookShare to Pinterest
Labels: WW2

Apologies for the lack of posts this month. Hectic life getting in the way. Normal service will be resumed shortly!
Posted by James MacCraggs at 00:16:00 2 comments:

So while I am struggling to paint up these Forged in Battle Bofors AA guns, I thought I should do a little blog on the Forged in Battle 15mm Loyd Carriers I picked up the other month. In these pics, the painted model is the Battlefront model. 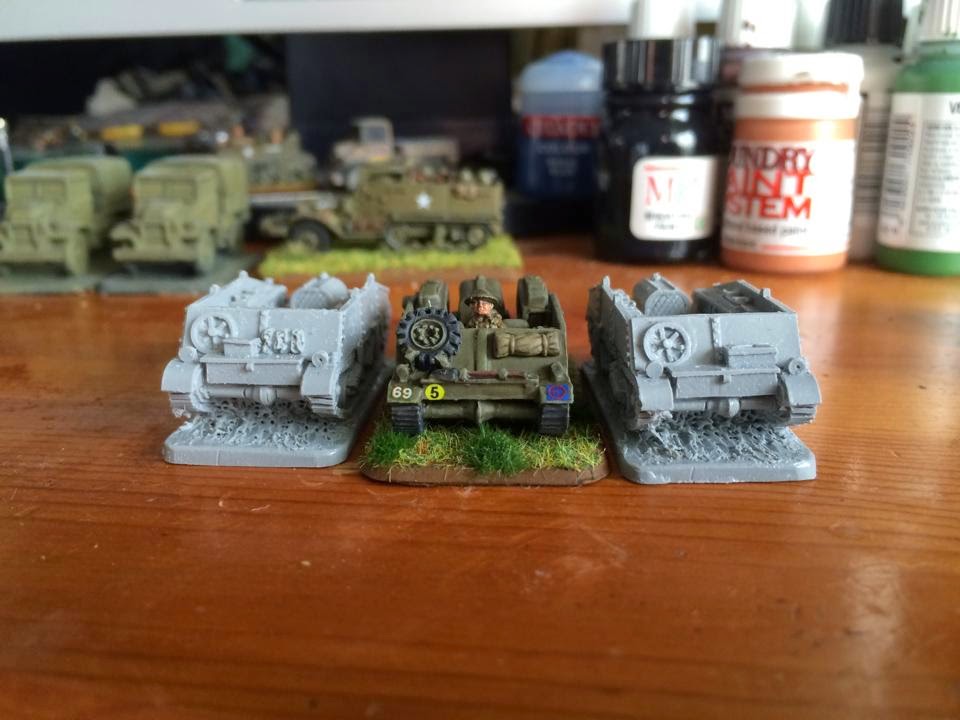 Having had a close look at them, they are slightly different from the Battlefront versions. The bases are slimmer, the model slightly taller and ever so slightly longer. Detail is fantastic and while unlike the Battlefront version they don't have a spare A/T gun wheel on the front, that's fine for me as they were bought for my 4.2" Mortar platoon. 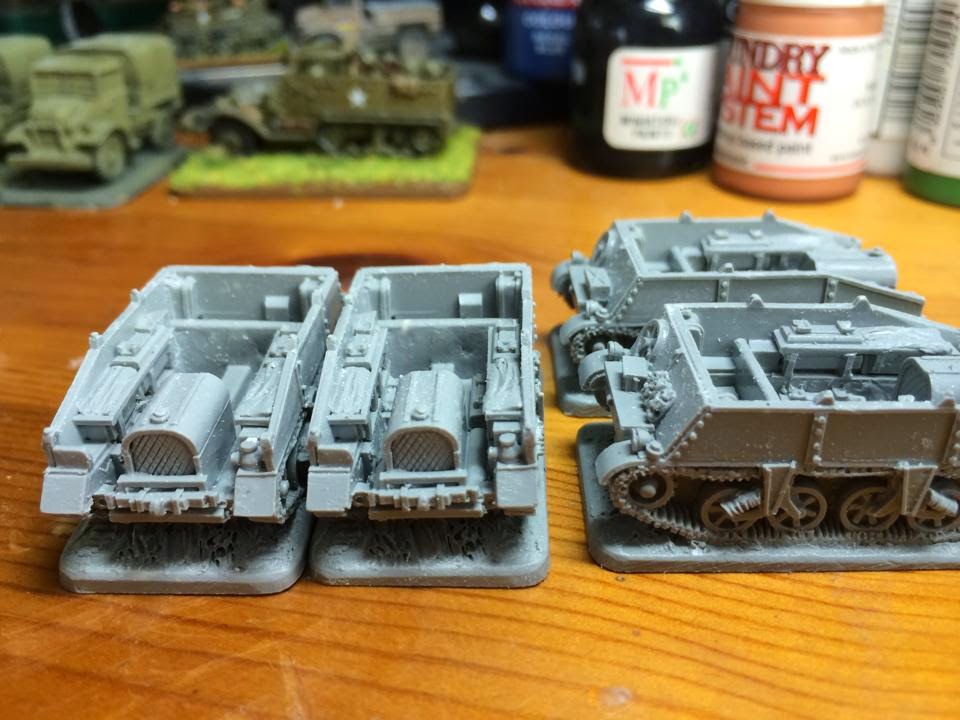 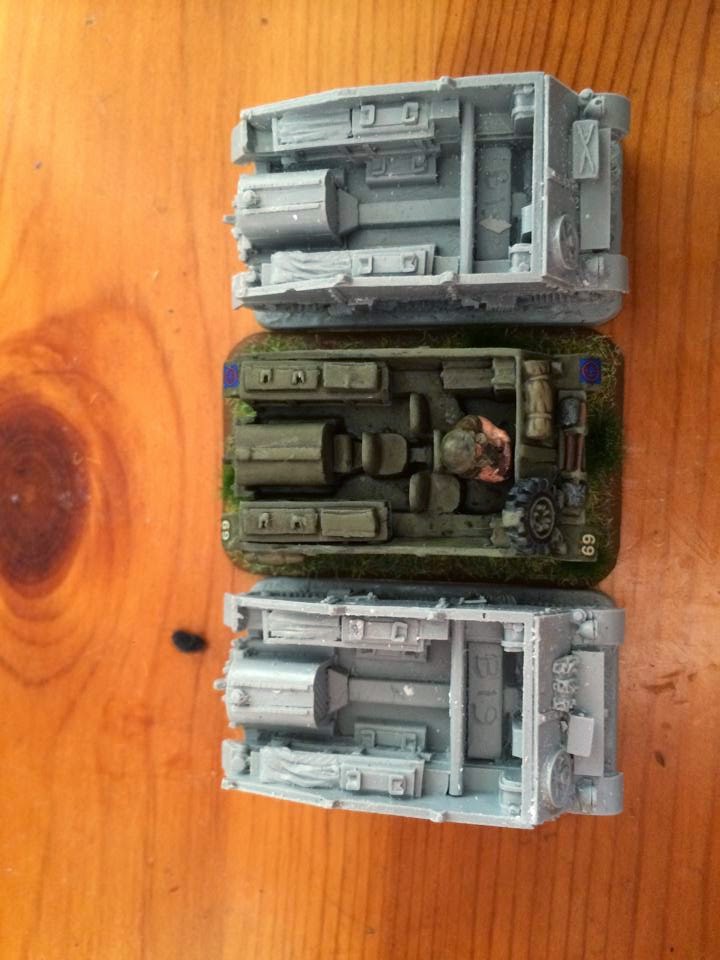 Rivet detail is great, as are the tracks. 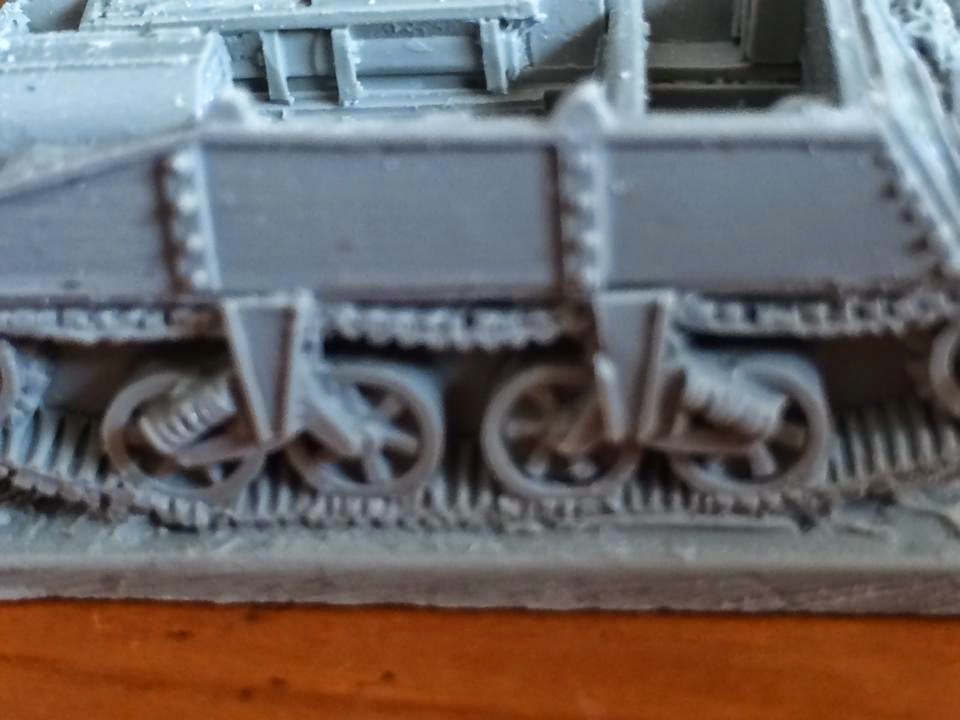 Internal detail is a bit patchy, as there is obviously stuff that is supposed to be covered by putting the crew in. 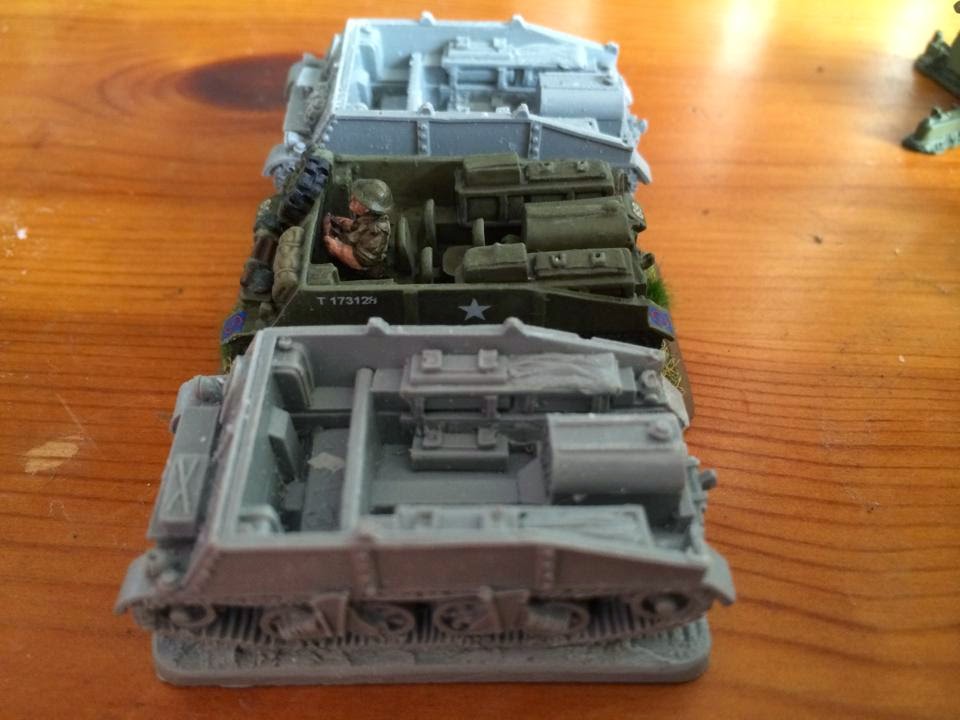 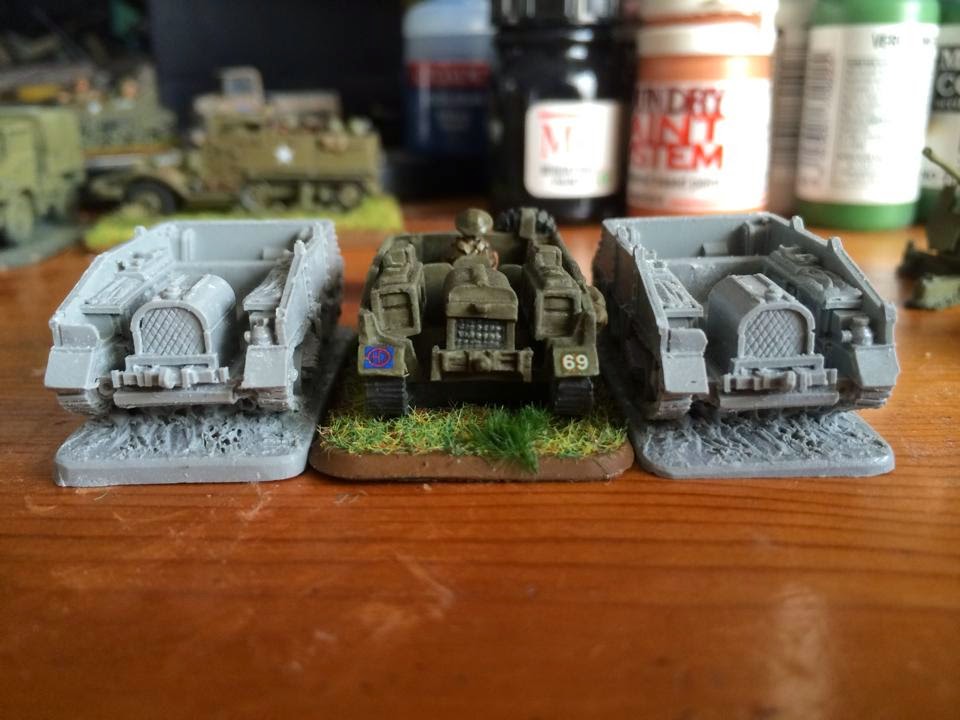 The nice thing about these models is they all have a little extra detail on them that makes them individual. Check out the stowage on the front  - all different. The crew figures have some nice poses as well, but all the same as the Universal Carriers I got from them. 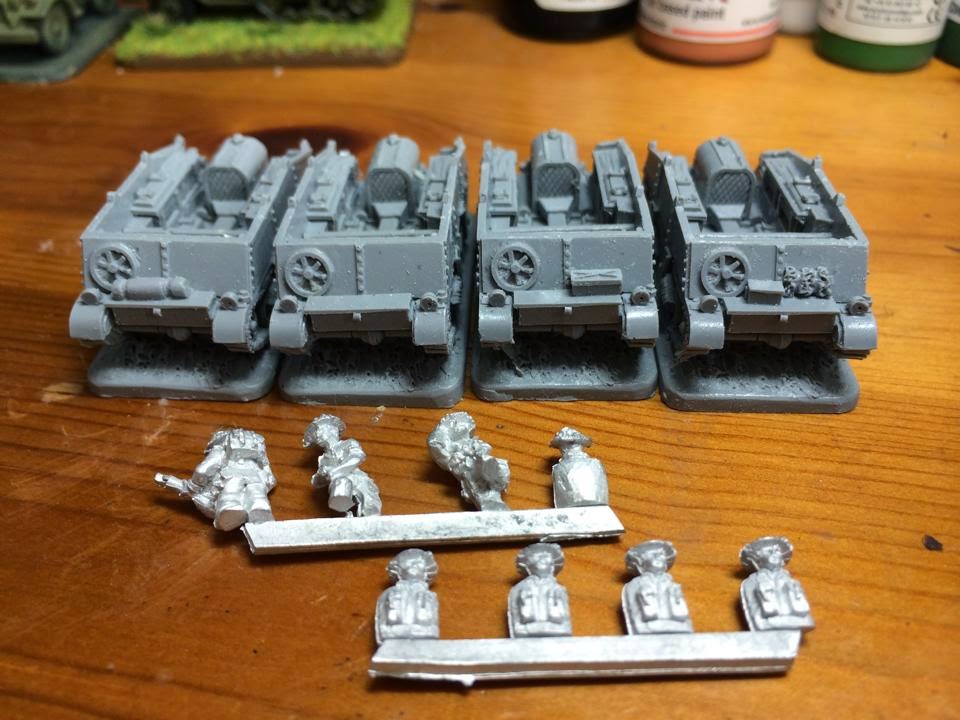 Never mind the drivers, they are 'armless...

And an idea of the height difference: And a slightly blurry pic from the other side: 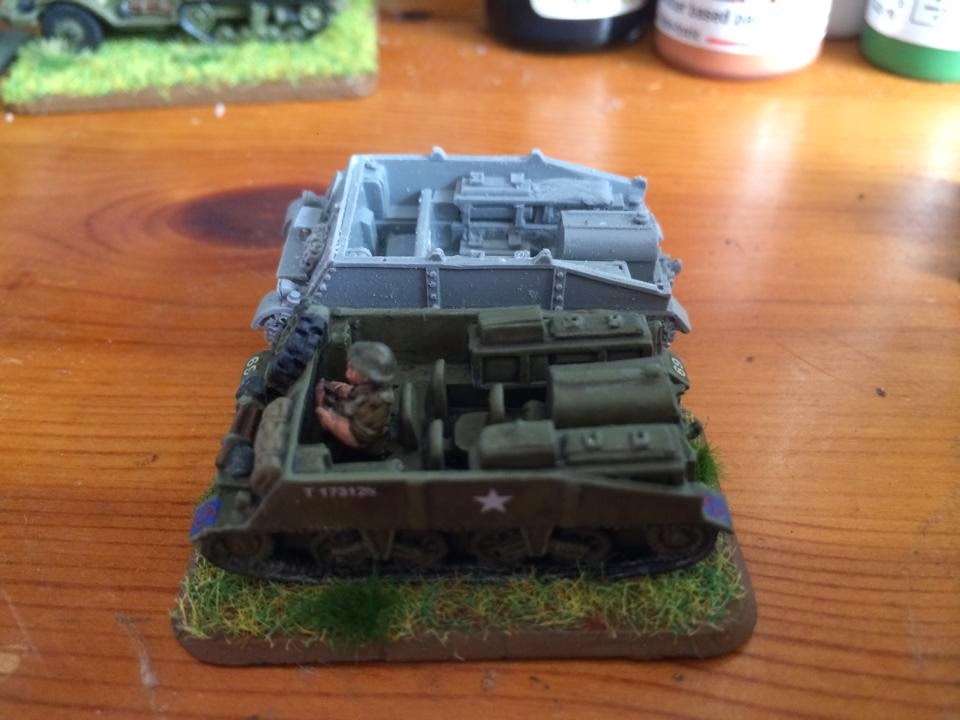 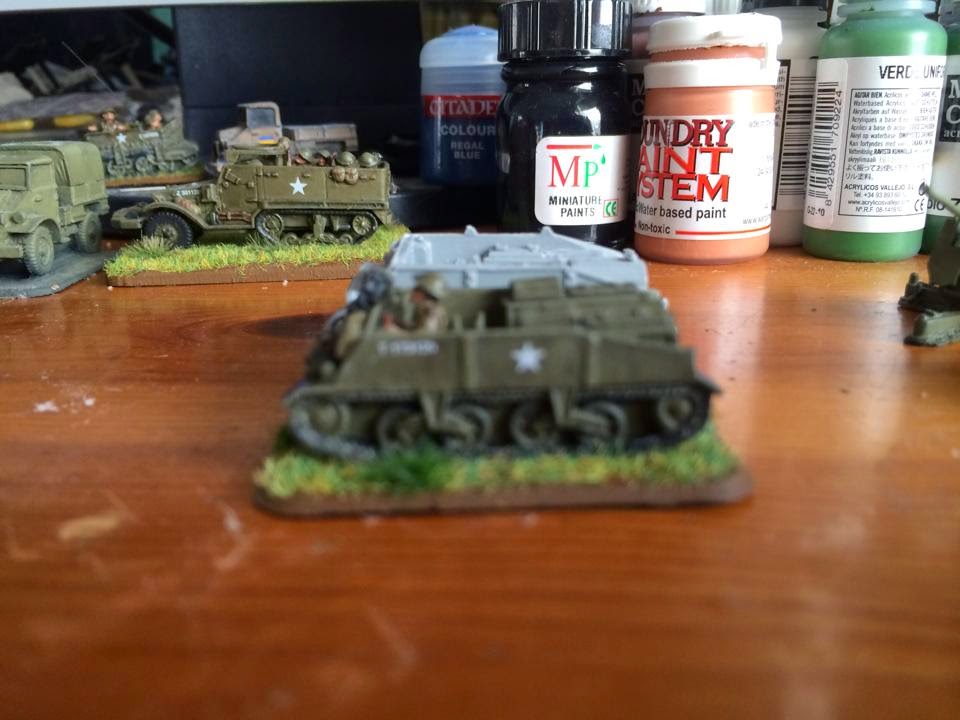 And a slightly blurry pic from the front: 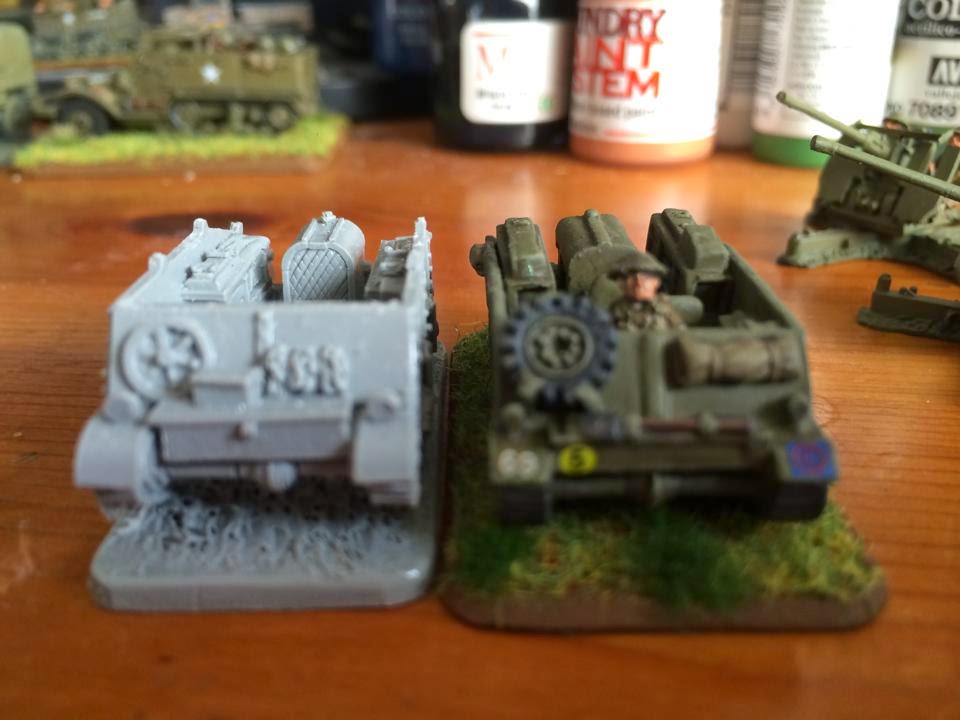 When I get round to painting these, I am going to use a new spray I have had for a while but not used yet. 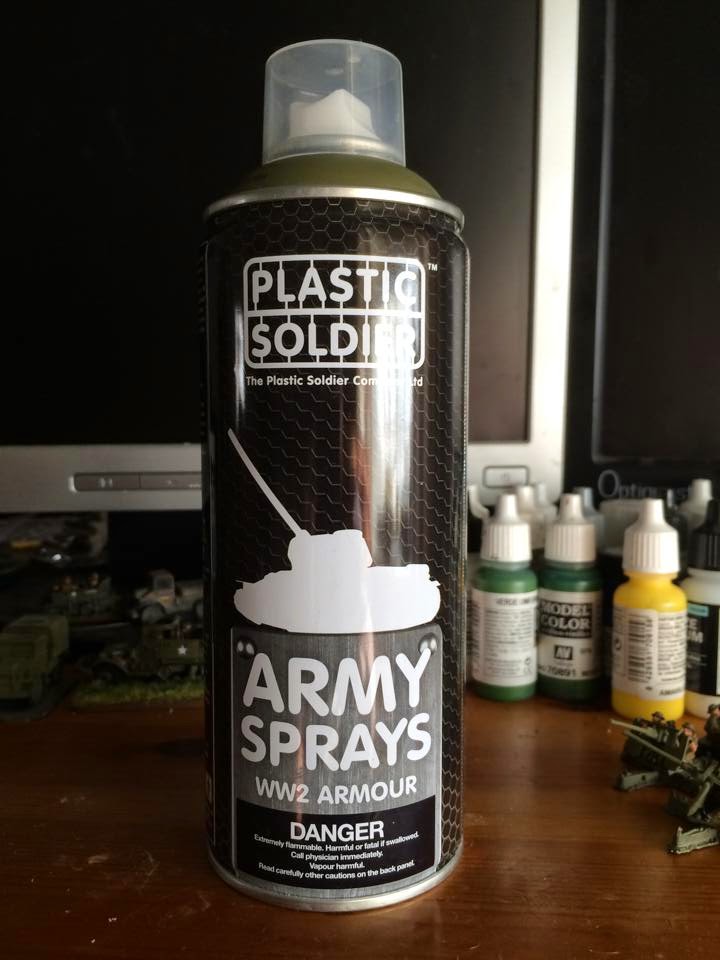 This is supposed to be a 'British Armour' colour, so I will be interested to see how it measures up to the Russian Uniform I have been using from Vallejo.
Posted by James MacCraggs at 23:30:00 2 comments: 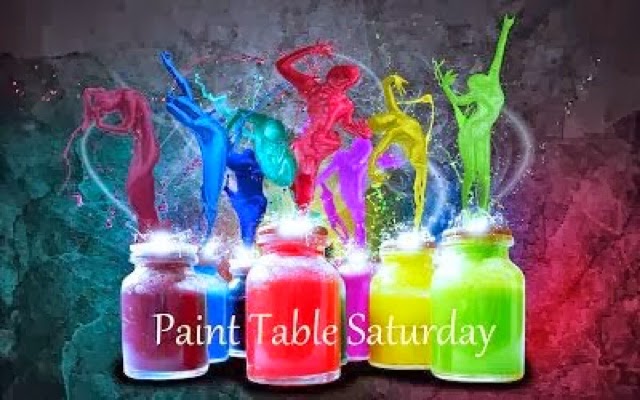 Having finished a couple of big batches of models recently (well, a few weeks ago) I've struggled a bit with motivation. I had selected my battery of 4 Bofors AA guns and some trucks I needed doing, only to find I really dislike the Forged in Battle sculpts of these guns and really wish I had bought the Battlefront version.

This has not helped me paint them!

I've taken some pics of where I'm at just now (still an early rough stage), but I really am struggling with these as I just feel the Battlefront versions would look better... 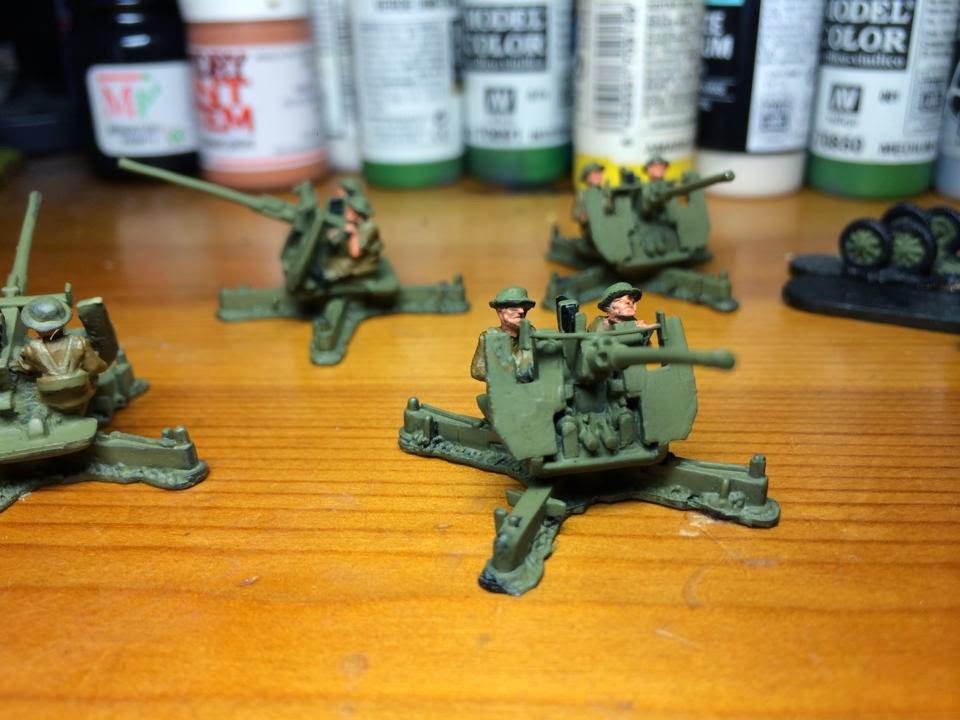 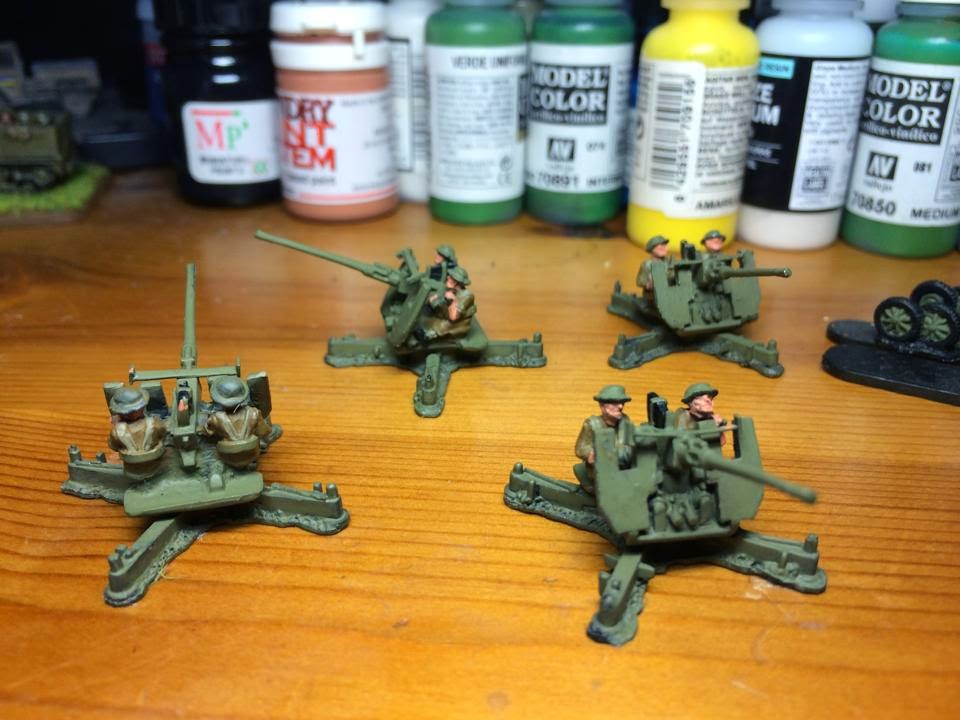 The gunsights on the models are scratch built (not part of the kit) and the platform + gunners + gun mechanism were all one part. Making it very hard to get into. The gunners sculpts are a bit rough, as are the surfaces on the gun shields. I may eventually finish these and sell them on, depending how happy I am when they are done.
Posted by James MacCraggs at 11:28:00 1 comment:

Not quite a paint table post (although I have moved some models up onto the paint table...). I was in Glasgow on Saturday and managed to pick up a third Churchill Crocodile - meaning I now have enough for a full troop.

Sticking this blister with the others lead to a slight sinking feeling... 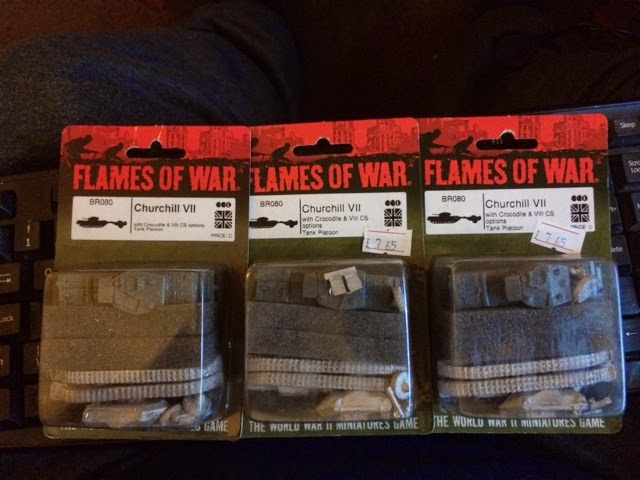 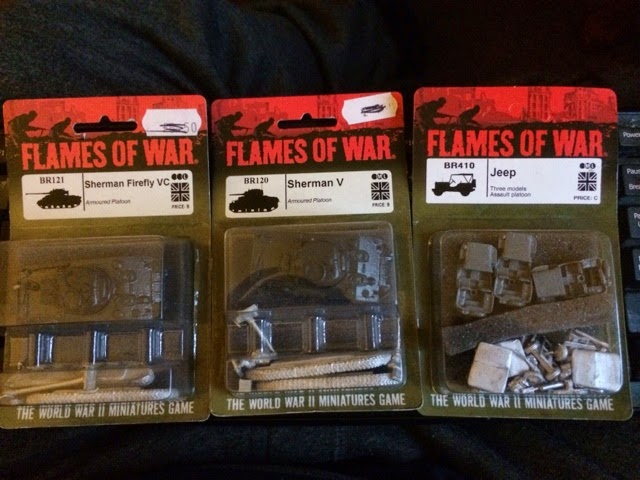 Spare Sherman V, Sherman Firefly (still need the other Sherman I's for its troop) and spare Jeeps (one for medic Jeep, one for MP jeep and one spare)... 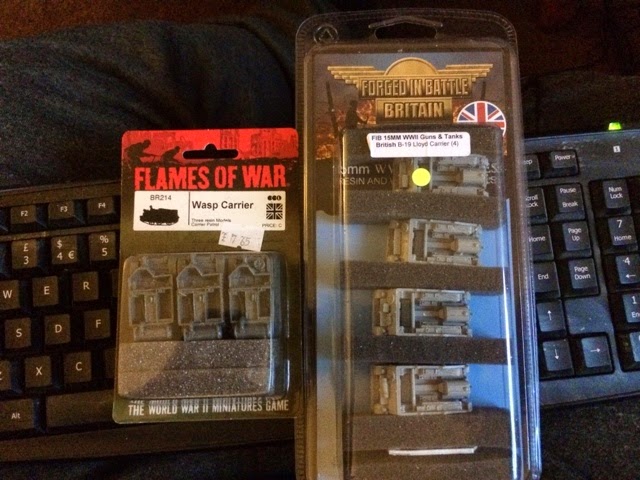 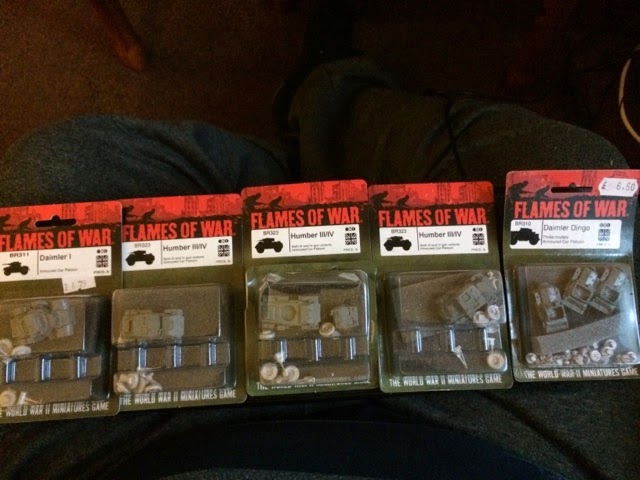 2nd Recce troop (plus HQ Daimler). This units going to me a mix of Daimler and Humber troops.

And that's not counting the stuff undercoated or the Universal carriers on the shelves. Save me!
Posted by James MacCraggs at 23:17:00 4 comments: