Lots of posts this week!

Having had the day more or less to spend working on my models, I managed to get the last few teams done!

So, my last Grenadier platoon, which makes 3 now in total for my Germans. Along with the 2 HQ teams and HQ A/T section with Panzershrecks. 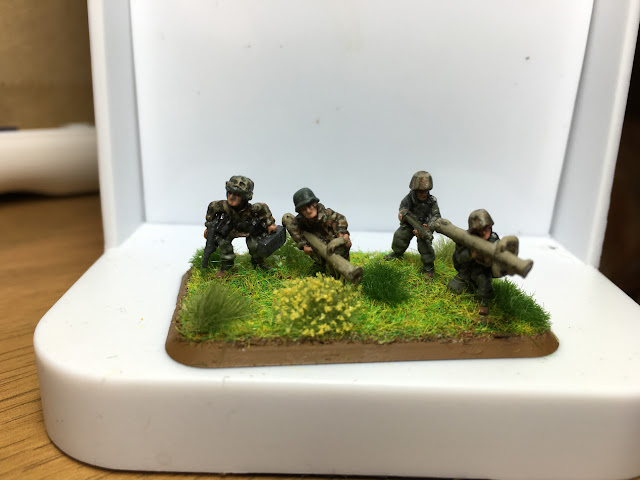 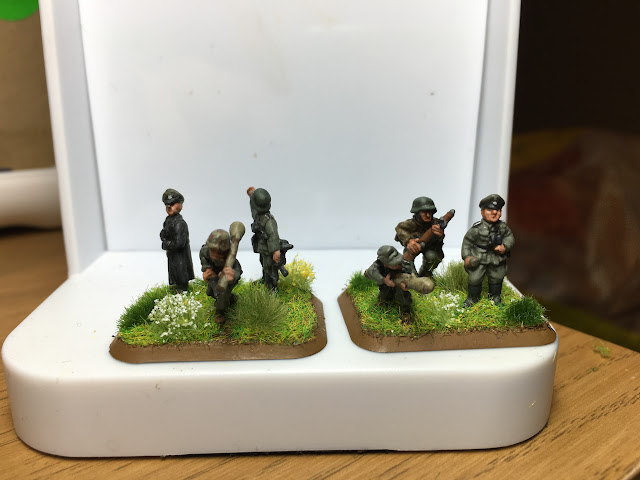 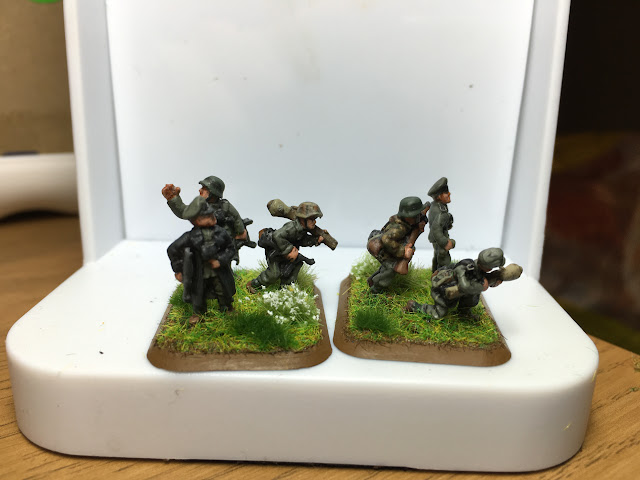 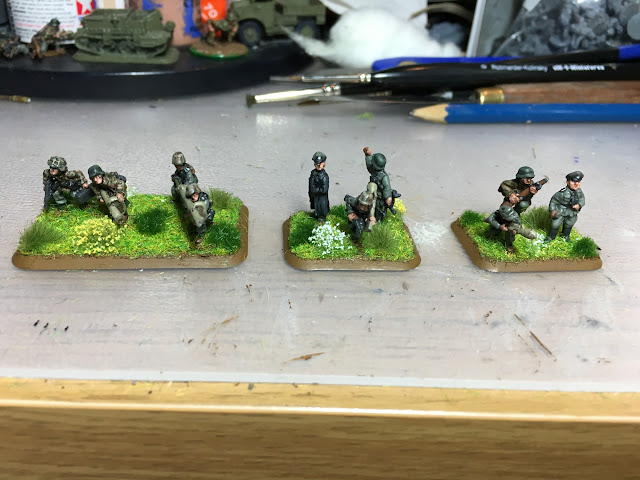 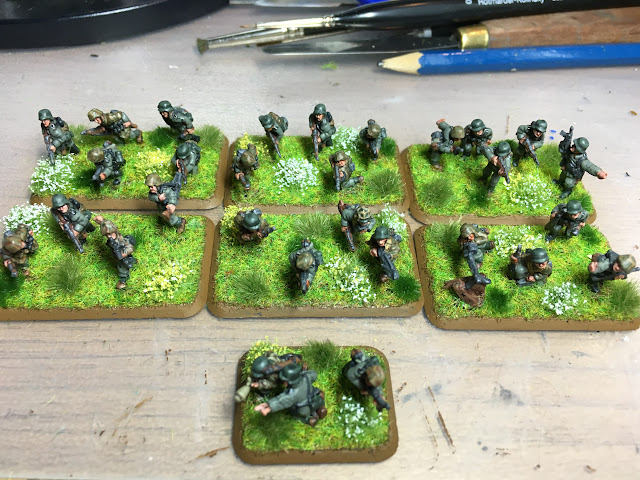 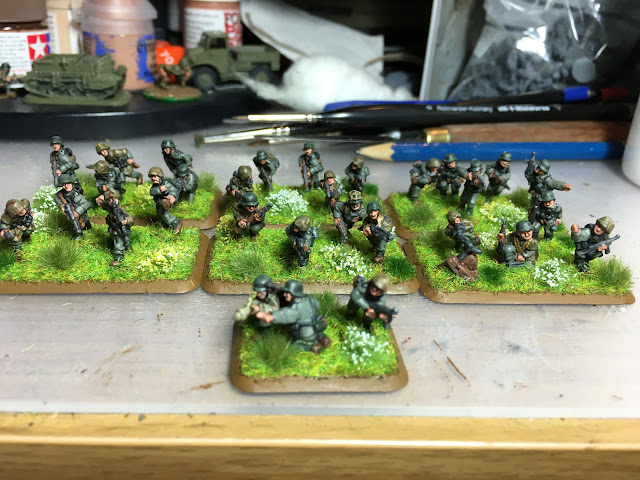 And with these two units done, I've completed my April Miniature Modelling Mayhem challenge. I'm continuing into May, with a few other units lined up, so I will probably start prepping those!

Two updates in a couple of days, but I just wanted to quickly show off these finished platoons.

These guys are 15mm Peter Pig WW2 Germans. For me they will be representing 1055. Grenadier Regiment, 89. Infantrie Division.

The figures were very kindly donated to me by Lee, and due to my clumsyness in getting them off the MDF bases (to have them match the basing style of the rest of my army) I wore a lot of the paint off the figures. I decided I may as well repaint them as I would be repairing them anyway (sorry Lee!).

First up we have some HMG42 teams: 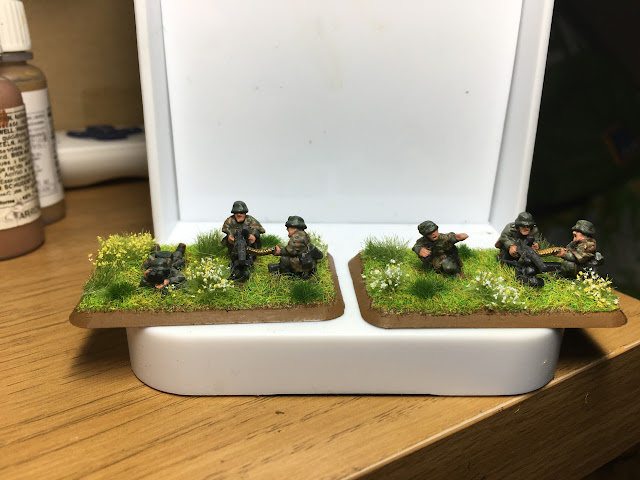 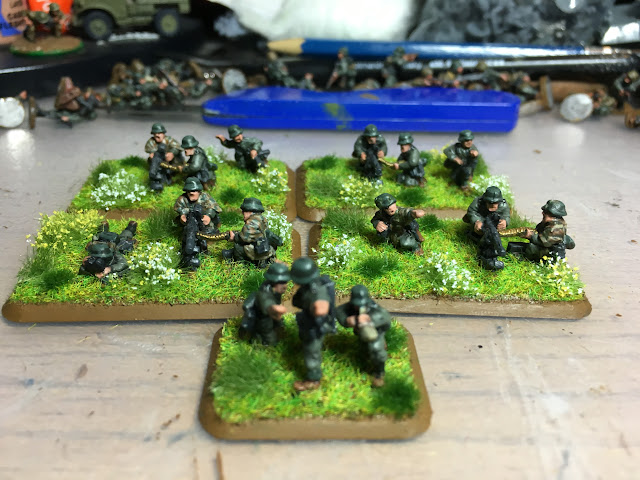 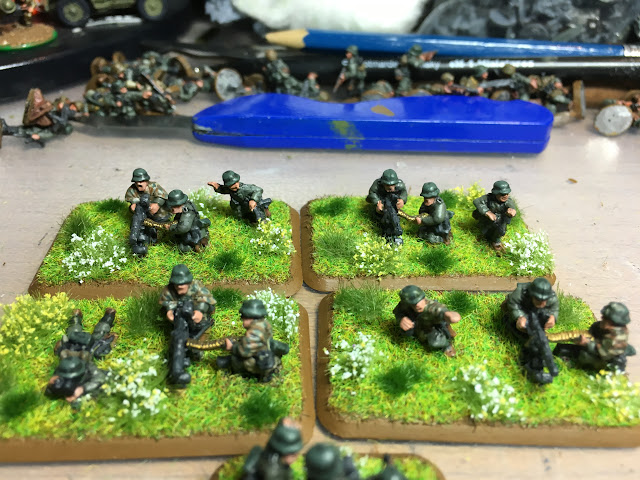 And some Grenadier squads: 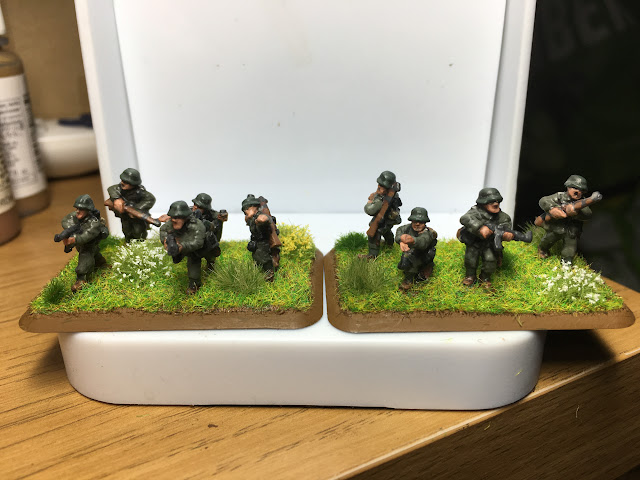 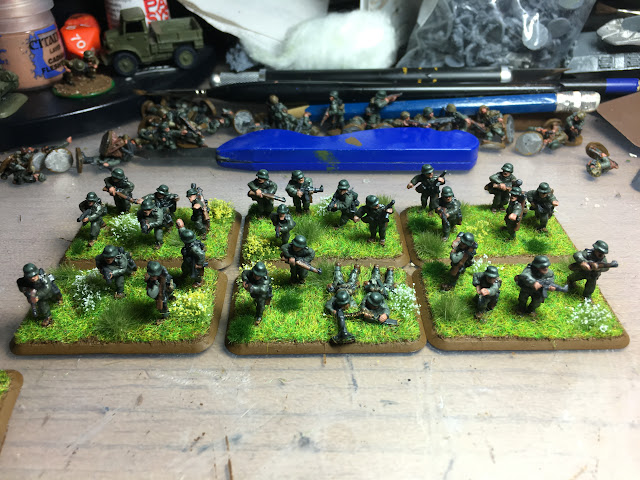 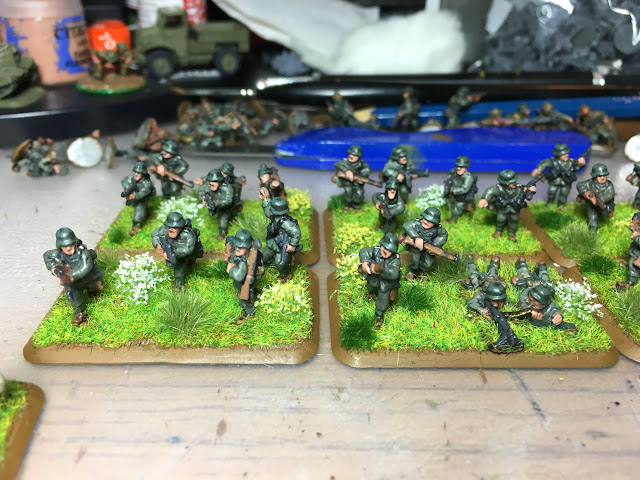 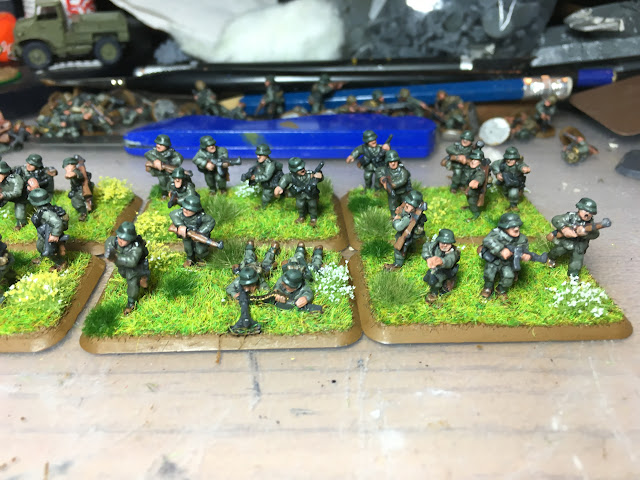 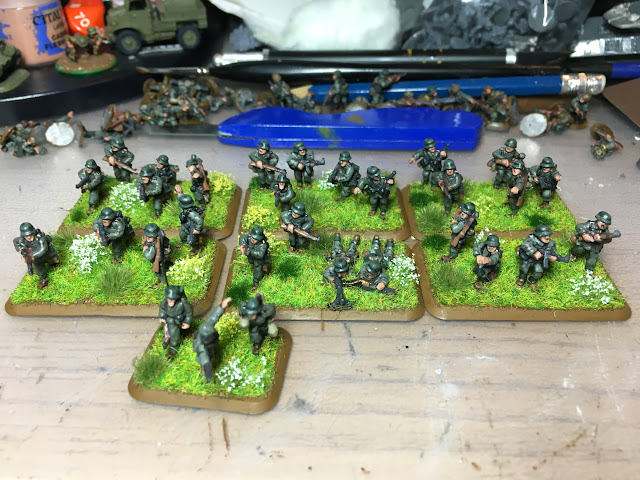 And then some 81mm Mortar teams, which will form part of the HQ unit: 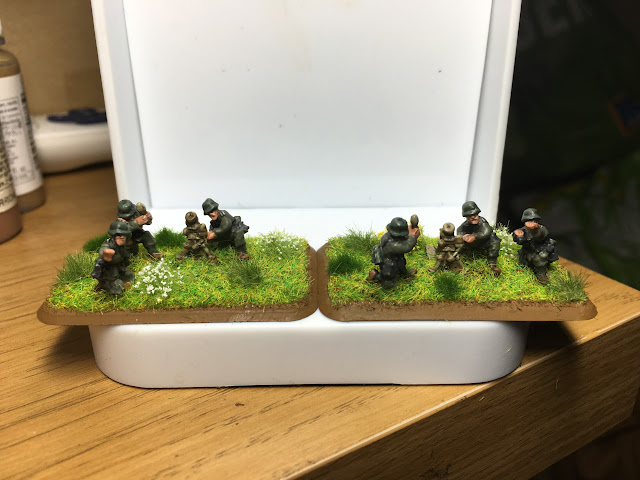 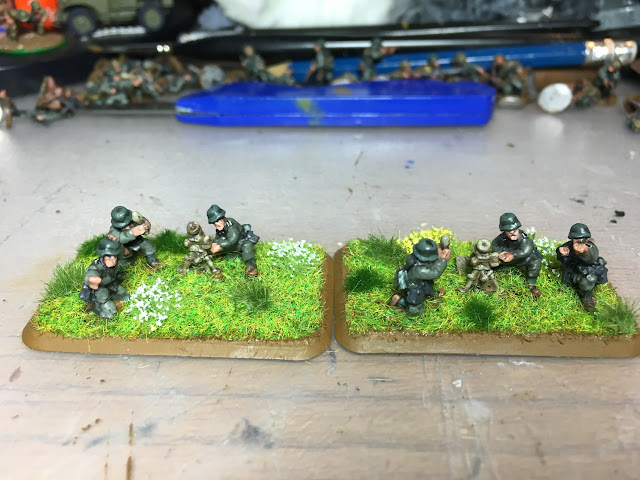 I've got another Grenadier platoon to base along with the Company HQ and A/T squad. I'm hoping I will make a good dent in those this weekend!

After that I aim to start prepping some more German units - possibly the Pak40's, Snipers and Mortar Platoon. I think those units will be bigger jobs, so we will see what progress I make.

Outside of painting the Germans, I have also been taking steps towards making the whole project bigger. I spent a bit of time thinking and talking about where I am going with this Totalize obsession of mine. The logical conclusion for me is to be able to fight, with my own forces and terrain, the Operation Totalize battles. The question of which part was answered by me thinking a little bigger. Where do I want to go with my collections, and what is the final aim.

I've decided that given the ease that my German Infantry force came together (when only building to a set points level, rather than my Brits which are a never ending project), it might be interesting to do other Operation Totalize themed forces. A chance encounter has lead me to own almost an army's worth of M4A4 Shermans. With a few small purchases these will go on to be a Polish 1st Armoured Division force, along with (hopefully) a similar sized Cromwell force.

Other ideas currently in my head are to look at doing a German Armoured (12. SS) list, a German AA gun list (to represent III Flakcorps - the list is from Bridge by Bridge, but I don't mind), possibly Canadian lists (although I am focusing initially on the Highland Divisions part of the attack) and a few other things that seem to me to be 'key' interesting points of the battle. Along side these forces, I'll be focusing my terrain acquisitions on the terrain suitable for the theater of operations and which fit with the battlefields of the Operation. Such as a raised bed railway line, sunken roads, hedgerows, etc.

I'm not a big fan of the SS on the table top, but as I am aiming to represent a whole series of battles over several days, there is no point denying or ignoring their involvement.

I am also planning on working on creating a series of scenarios and Operation Totalize specific army lists - with a view to hopefully undertaking a collaboration with Mark over at House of Hengist and having some sort of Mega Game in the future. So a little bit of a change in scope and scale of what I am working on, and a slight re-orientation of the direction my collection will be taking. I am still expecting to continue to expand my Jocks, however!
Posted by James MacCraggs at 02:06:00 12 comments:

Just a quick update on my progress towards the challenge - to paint two German Grenadier Platoons, a HMG Platoon and the company command (with Mortars and A/T squad) in April.

I've started the basing this week, and hopefully will be on course to get them all done this month, on target!

The efforts tonight (Thursday night) have been trimming and sorting the bases and touching up the brown. This took a bit longer than I thought it would, but behind tonight's stuff is the next platoon and command A/T squad ready to be based.

Lots of progress, all backed up by the google hangouts with: 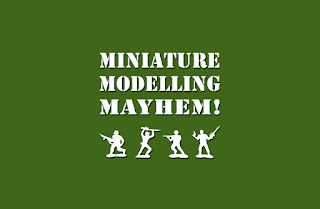 Lots of interesting chats helping me to make constant progress!

The end of week 2 of the April Challenge and I'm making some good progress. Batch #1 and #2 are painted and just needing based. I had a bit of an issue with varnish, having decided to try out some of the new Vallejo Polyurethane Matt Varnish. I tried to apply this in the usual way, giving it a good shake, etc. It ended up all bubbly on the model which left marks when it dried.

A lot of messing about and the models didn't look very matt. I tried the Vallejo Matt Varnish and still no matt, so I tried a spray. I'm still not happy that they are as matt as they should be but they are better than they were.

With the second batch I tried the Polyurethane varnish again, this time opening the bottle and stirring it (as per the Vallejo website instructions). Still shiny and no matt effect. Small bubbles started appearing while painting on the varnish, possibly caused by the brush? I switched to the standard matt varnish while the other was still wet and it seems to have saved them a bit. It's still not as matt as I would like.

Next batch I will just use the normal matt varnish. I think there is something with the Polyurethane varnish I am missing or doing wrong.

Anyway, 7 strips of Peter Pig infantry to go and that will be everything painted for this month that I had planned. The bases are all covered in the resin, so just need trimming, painting, flocking, etc.

If I have time spare (Ha!) I might start either the Mortars of Pak40's.

On Friday the first ever TtC MMM April Challenge started. However, there is still time for you to join!

The challenge is aimed at encouraging participation in, viewing live or watching the recordings of the Tabletop Commanders Paint and Chats, or participation in the informal non recorded Miniature Modelling Mayhem Hangouts.

To take part in the challenge all you have to do is pick a couple of 'units' that you want to get painted. The number of units you pick is up to you, but should push you. The units can be any size, and scale, any period - or even just terrain or other such gaming linked projects.

If you join us on the various chats, or here on the group, let us know what your working on, how your getting on, give us some details about the units your painting, their history, the rules you are using... anything that starts a discussion and helps you get those units painted!

We're a friendly bunch and aim to be as inclusive as possible. And if you have not tried painting while on a hangout, its amazing how much you get done while talking toy soldiers and military history.

So far in the Challenge we have people doing Naps, ECW, WW2, Sci Fi, AWI/French Indian Wars... and no doubt a host of other periods and scales as well. Join us and get those units that you've been putting off done!

I'm working on getting a good start on my Flames of War German Grenadier army, with my Goal for April to be finishing 2 infantry platoons, a HMG platoon and my HQ platoon (with A/T, Snipers and Mortars). I will be continuing into May with the aim of bulking out the support units. Hopefully by June I'll have a good portion of my German infantry figures painted and out of the lead pile!

So far this week I've made good progress on one platoon of Grenadiers (which I started at the tale end of last week, slightly early!). The other units are blocked in with the main colors and hopefully will get completed over the next couple of weeks. Bigger lolipop sticks than normal!


The paint and chats on Google Hangouts (advertised on the Facebook group above, or via our Google+ communities Tabletop Commanders and MMM) are a really great way to focus on your painting. Chatting about the hobby and history (and on the MMM groups everything else under the sun) really helps you lose track of your painting - and paint more than you would normally. It's a very peculiar thing, but being distracted by easy going conversation makes you stop thinking about how many rifles, boots or faces you have to paint or have painted, and just crack on!

So thing about joining in, taking part and stopping by a paint and chat and saying hello!
Posted by James MacCraggs at 20:47:00 3 comments:

I spent some time today at a local Wargames Show - Teescon 2016. At the show I got to talk to the owner of Waugh Games about some of his upcoming releases and some of his WiP models. He had some prototype casts and 3D prints of some Leopard 2 versions in 15mm, which I know I'm interested in! These should be great for use with 15mm Team Yankee.

I've offered to do a review of these models once they are due for release, so fingers crossed that's something that comes to fruition. The 3D prints certainly look great. Pricing wise the size of these models was compared to the King Tiger and Jadgtiger models which are currently less than £6 each from Waugh Games - but to be confirmed.

As far as Team Yankee goes, I'm focusing on my WW2 German army for FoW. But the order is still in my shopping basket with Heroics and Ross, waiting on my putting the trigger!

Edit - it's been pointed out these are both versions of the Leopard 2 turrets.
Posted by James MacCraggs at 17:04:00 3 comments: