I spoke about doing a post on this a while ago, but it got put on the back burner and forgotten about. I get a lot of compliments on the basing of my models, and a few of the guys have asked me what I do. There isn't anything really unique about this technique. It's basically applying static grass to the base, then tarting it up with flowers and tufts!

Anyway, a while back I did a little video to show some of what I do, along with some pictures.

1.  Prepare the bases (and count you have the correct number!). For the Flames of War bases this is quick - I generally just trim along the bottom edges just to make sure there is no flash or anything here. I also make sure the edge where they base has been attached to the sprue is nice and clean. Normally I would just use a scalpel for this.

As I put acrylic resin on the bases before I put any models on, I also score the surface of the base. I used to do this by scratching a zig zag pattern in 2 different directions on the surface, but recently I came up with a quicker way of doing this. I have a very fine toothed saw (like a hacksaw, but with slightly more raised teeth) and I drag this over the base in 2 directions. Much quicker and safer!

2.  Applies to the way I base my mini's. I dislike the idea of putting basing medium near finished minis, as I will get it all over them. As such I put the medium on the bases and then cut holes in it once it's dry. The Acrylic Resin I use just peels off and leaves a nice space for the infantry figures to be glued to the base directly. The trick is getting the resin to a decent depth so that the bases are not pronounced. This method is probably more time consuming that others.

Apply the resin to the surface of the base. I have used a small spoon for this in the past, but recently started using a small 'pallet knife' I got from a painting supplies shop. I believe it's purpose is for mixing oil paints? It allows me to put the resin on the base and then spread it around. At this point I don't worry about the resin being in the wrong place, so long as the base is covered.

3.  Once the resin is dry, using a scalpel I cut off the excess. Once this is done, the base should look like this:

The trick here is just to put a good dollop of paint directly onto the base, and then use a rubbish but big brush just to make sure the base is covered.

This paint is actually one I go through most of - followed by English Uniform and Russian Uniform (my Infantry and Tank base colours!).

5.  Once dry, put a dollop of PVA onto the base, and again use a poor quality brush to cover the top surface. I try to avoid getting any on the beveled edges, but if I do, it's no big deal.

6.  Apply the static grass! I use a 'Spring meadow blend' which seems to be a mix of the common 'spring' and 'summer' static grasses. For the 15mm models I think it's a 2mm length grass. I would caution you - if your planning on doing a big army, and want the basing to be the same, take a note of which make and colour you use, else you could end up with variation over the army...

Video of the application process can be found here:


But basically I use a washing up liquid (Dish Soap?) bottle with the stopper removed. this is filled with the grass and given a good shake before use! A funnel of some sort is very useful for getting the static grass into the bottle. You will also need a tub to put the bases in while you squirt them, in order to not be quite so messy. And to be able to retrieve the grass that didn't end up on the base!

7.  Once the grass is on, and the whole thing is dried, the base looks like this:

As you can see, the grass is stuck to the sides and is generally a bit scruffy.

What I do next is take a scalpel and carefully cut along the top of the beveled edges. I then use the same scalpel to carefully scrape the glue and grass from the sides of the base. When I'm done, it looks like this:

My next step is to take a small pair of scissors - actually nail scissors I picked up for 99p in a super market - oh, the looks A gives me when I turn up with 'random' things for the shopping basket! I use the scissors to do some 15mm landscaping... generally trimming the grass along the top edge and surface. Just to make sure everything is a similar length, etc. It should end up looking like this:

8.  Touch up the sides of the base with Flat Earth again (I also sometimes do the bases without painting the sides before I apply the grass, to save a little time and paint. However most times I forget!). The end result looks like this:

If you want to, at this stage you could also give the flat earth sections a coat or two of varnish - although I rarely do.

So that's the basic's of how I get the grass on. The rest is simple - for this base I glued a model directly onto the surface by applying superglue to the underside of the tracks and pressing down until it was fixed in place.

As to which tufts to use - there are any number of styles of these, and it's just about picking the style that suits your army. Tufts can be used to unify the army, or to mark out different types of bases (use purple flowers on commend bases, or one platoon uses all one colour, etc).

This particular base went on to become: 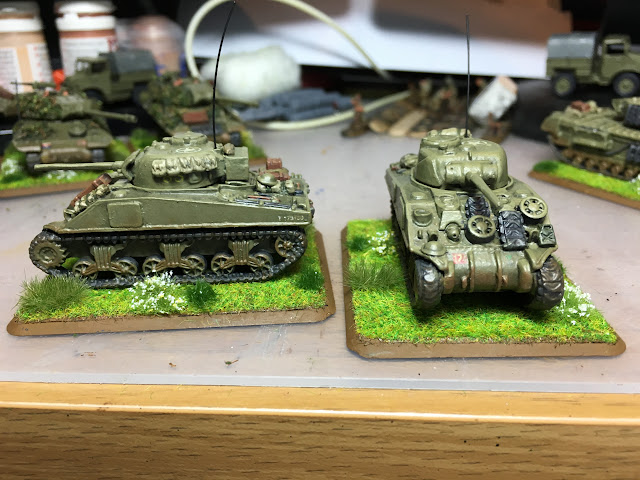 I also use my little scissors to trim the tufts as well, just to make sure they are neat - 15mm landscaping!

The very last thing I do with my bases is apply some thin 'steel paper' to the underside, so that the bases stick to the magnetic sheeting I use for my storage.

And thats it! Thanks to Bob for getting on my case about this tutorial!

Email ThisBlogThis!Share to TwitterShare to FacebookShare to Pinterest
Labels: Basing, Flames of War, FoW, How To, MiniNatur, Static Grass, Tufts