On Easter Monday I headed over to StiGs for a quick, introductory, game of version 4 Flames of War. Also taking part was Stu, who had never played FoW before. On the 30th of April I'm laying on a large scale FoW v4 game at the club, so wanted to use this game as an opportunity to test out the theory (and the new rules) in a trial scenario.

I decided to go for the Battle of Noyers (Operation Pomegranate), one of the diversionary attacks put in by the allied armies immediately before Operation Goodwood. As usual, I went with something that has a personal connection - this was the first battle that 33rd Armoured Brigade fought as a unit following it's arrival in Normandy. The other benefits of using this battle as a scenario is that there were two phases to the battle. This meant I could do a trial game with StiG and Stu before the main event, and have it impact on the game on the 30th.

As an intro game, and a scenario, I decided to use a few special rules. However, we stuck to the v4 rules for everything with the exception of three main points:

1.  Hidden German deployment. The Germans were controlled by myself as umpire and were deployed at the beginning of the game via a sketch map.

2.  Preparatory bombardment. The allied players each for a bombardment template at the start of the game, which left a ranged in marker. This was relevant as one of these templates was directly on a German position. Artillery was off table and available via a different mechanic..

3.  Tiddly Winks... Over the board, at points I deemed to be tactically significant (gaps in hedges, narrow points of the roads, forests and corn fields, etc) I scattered small green counters. These counters, on being approached by allied units, would generate a D20 roll on a random events table. These events ranged from positive events - such as 'covered approach' which allowed the unit to move 2d6 and be in cover at the end of that movement, or Ambulance Jeep, which brought on an ambulance jeep which would allow an auto unpin for a unit it was near. On the other hand, there were negatives - such as a random sniper shot against a unit (including armour - the commander was being sniped), German reinforcements or - mainly - minefields in Ambush! Artillery was also available (for both sides) through this method, but neither side rolled for artillery support.

This combination of hidden deployment and random events seemed to go down very well with the players. StiG stated that he thought it was one of the best games of FoW he had played, which I take as a massive compliment. Both players approached the game carefully and tactically and there were some great, thematic, random events. Like both times the corn fields were entered resulted in the 'covered approach' roll, allowing units to appear at the edge of the corn in one move. Or the unit emerging from the corn into an orchard rolling the 'lost' event, and ending up 2d6 away in a random direction and emerging onto the parallel road. The most common event, however, was 'minefield'. This was deliberate, as I had seeded this event into the table several times to reflect the history of the battle. Basically the allied forces had been promised that friendly minefields had been lifted or gapped for them, only to find out they had not been. As a result, from one Squadron of 18 tanks, only 7 made it to the enemy positions - largely down to 'friendly' minefields!

I'll be using a different table to roll on during the next game, so for your enjoyment, here is what I used:


Rapidly, the allied advance ran into minefields. Quite a lot of minefields, especially in front of StiGs platoon of the 1/6th South Staffs.

As the allies advanced, the Germans held their fire, waiting for clear lines of fire (or trying to unpin)! 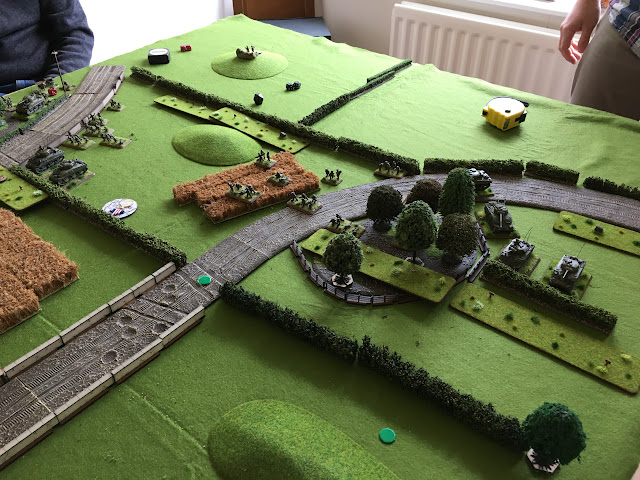 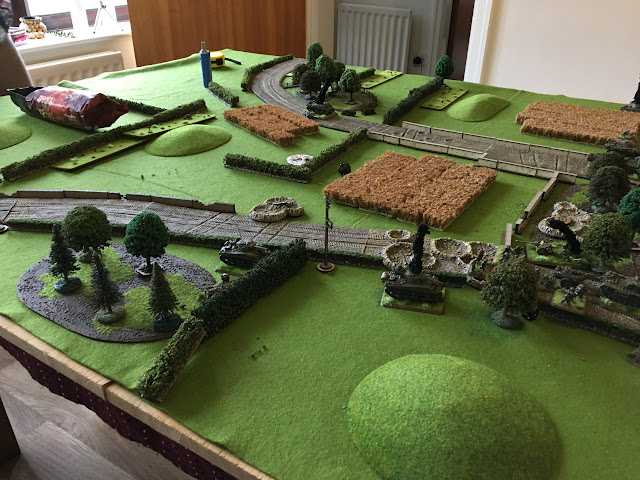 I really enjoyed running the game, and I hope I can run something as fun on the 30th! The table looked great, and it was really good to get my terrain out again. Need more hedges and stuff, but I was happy with the look.

How did v4 play? I think StiG summed it up best. He has played v1, 2, 3 and now v4. His comment was that "It's Flames of War, it just plays more smoothly. But it's definitely Flames of War.". I would 100% agree - this was very much a FoW game, even with my little tweaks. I'm a strong believer that the rules can be used as a framework for playing historical games. I think what we played was a fun, fast and tactical game based very much on a historical scenario. To me, it reflected the outcome of the actual battle - and that is key to me. Any rules should reflect the outcome you expect.

I'll get pictures and stuff from the game on the 30th,