Hi Folks - and Merry Christmas from me and mine to you and yours!

This last week or so I've gotten started on my first entry for the Analogue Hobbies Painting Challenge 8 (AHPC8), but progress has been slow. In all honesty I've just struggled to find the motivation to paint German gun crew. I have made some progress, but I think the pile of prepped models has actually put a damper on my motivation. I finally decided to go back to basics, pick one unit at a time and get them done, rather than staring at the whole lot and fretting!

Yesterday I really lucked out on gifts, getting everything that was on the list I had provided Amy with earlier in the year. Again, books were the main focus as they are easier to pick up and less chance of things not arriving by the big day. But I did get some models... 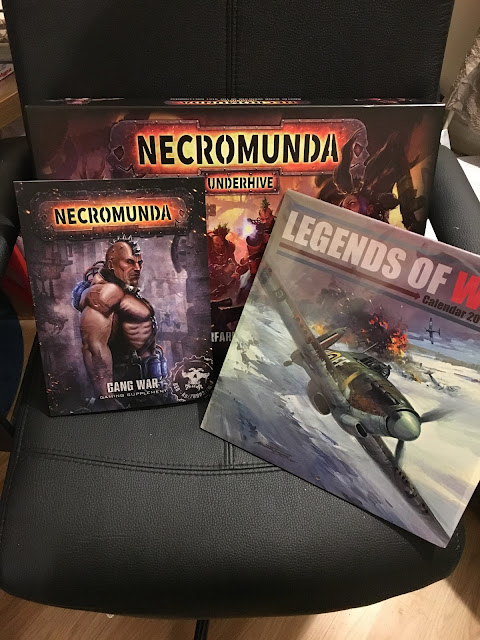 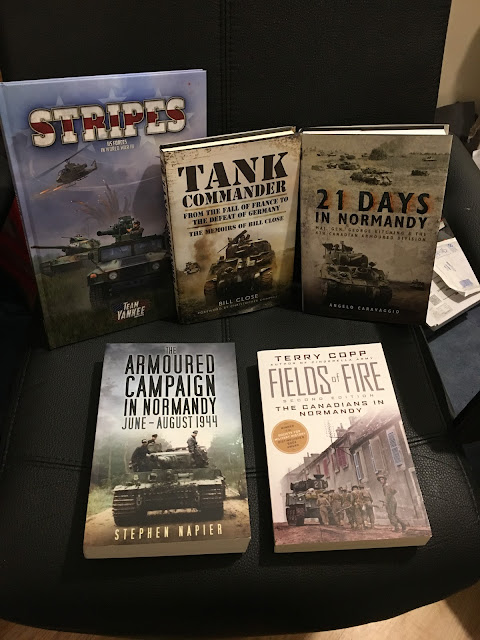 I'm really pleased with all of these. The Normandy stuff should keep me going for a while, and there looks to be some really great info in them. Especially the info on the Canadians! Combined with a really really interesting online find on Christmas Eve, where I found a .PDF of a post war Canadian Army report into Totalise that is chock full of some really great info, I feel like I've got some great new perspectives on the battle to read through.

Stripes is also a really interesting book, with lots of great options for Team Yankee... I can see me expanding my 3mm Americans based on some of the stuff that's there.

Necromunda is the first GW game I've gotten in a long time. When I saw it was coming out I just had to jump on board (which is pretty uncommon for me). I've great memories of this game from my teenage years. The contents of the box look great, and I'll have a think about how I build the figures before I do anything with them... but it does mean I need to think about new scenery!

Over the weekend, I also took the opportunity to prime my prepped German guns. Gunuary doesn't properly start until the 1st of January, but I'm jumping in early as I've so much to do. 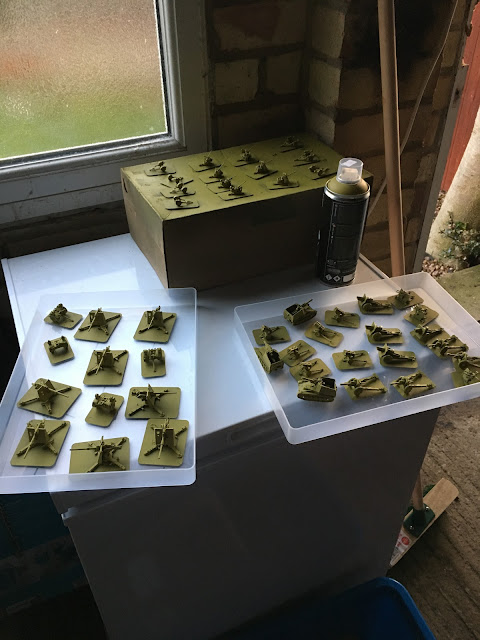 A can of Plastic Soldier Company 'Late War German Dunkelgelb' went quite a long way on these, and forms a decent primer coat on all the guns. I'll probably do another light coat of middlestone or green ochre over these before detailing, washing and highlights. I also have to prep quite a lot of bases!

Right now, I'm focusing on the crew and guns for a 3.7cm AA battery. The figures are from the Battlefront SS set, but I am painting them in my attempt at Luftwaffe ground uniforms for a battery of III Flak Corps guns.

Hopefully everyone else got what they wanted for Christmas and had a great day!

In keeping with my blog being a repository for info I've found on Operation Totalize, I wanted to post this link. It's from a Canadian Army Newsreel and it shows what I believe is one of the training columns for Totalize in action:


It's interesting to see how closely packed the vehicles are, and there is a good shot of towed 6pdrs and SP M10 (which appear to have the armoured roofs!). Some of the earlier footage shows infantry boarding De-frocked priests - including one shot that appears to have a 144RAC Sherman in the background (going by the light coloured turret number).

Interesting find, and great to see all this Canadian stuff for free on YouTube, while in the UK historic footage has been removed and requires substantial outlay for minutes long videos with no preview of what you are getting for your money.

Last week I was lucky enough to win a £20 voucher for Butlers Printed Models. This was a random prize for completing an online survey for one of the wargaming magazines.

I've used BPM before - these were the guys that designed and printed the Ram tank turrets I wanted to go on my Battlefront Ram Kangeroo's. I've not purchased any of their 1/285th scale (6mm) stuff yet, but since I had the voucher I'd fill in the gaps in my Team Yankee British force.

I got some Scorpions, FV432's, Chieftans, Abbots and Spartans. The Abbots were of particular interest as GHQ does not make these and I felt the Heroics and Ros ones were a little small compared to the GHQ models.

Everything arrived well packed, with one example in each bag cleared of 'flash'. The biggest downside of these models for me is this flash. It took a while to clean them up and it's quite a messy process:

Once I had everything cleaned up and assembled, I gave them a primer coat and got some comparison pics:


You can see that the BPM models have decent detail on them, but there is the telltale 'rings' of 3D printing visible on the hull. For a 6mm model though, detail is good.


So scale wise the BPM models are pretty close to GHQ. Detail wise, I would say they are worse than H&R's best, but better than H&R's worst... if that makes sense. The clean up on them is a bit of a bugger, and the Chieftans are more expensive than H&R models - although I don't have any of their tanks to hand to compare the detail or size.

Certainly for the Abbots I would recommend the BPM models over the H&R's ones, as they are a better scale fit.

These models are all (hopefully!) going to get painted during the upcoming AHPC challenge...

Apologies for the lack of content of late, I've been focusing on prepping for the upcoming Analogue Hobbies Painting Challenge as well as trying to finish off my first Dreadnought Stalker for my 3mm Sci Fi army.

First up, the prep. I'd already done some prep on my 15mm German arty, but needed to finish off the rest. I've not got quite a bundle of this stuff to do - which will be my Gunuary project as well. I'm hoping that the guns themselves will be quick to paint, but am not looking forward to all those gun crew!

I've also been prepping some more 3mm Sci Fi stuff as well as my 6mm Team Yankee British force. We're hoping to get some games of this (myself, Dave and Martin) in the new year. Dave has a load of Russkie stuff done, so I want to get some of my Brits painted up. 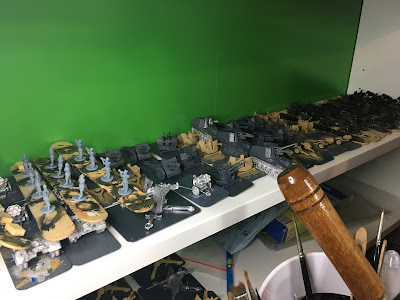 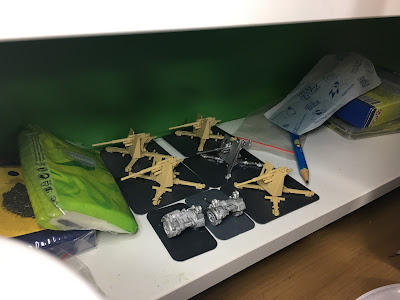 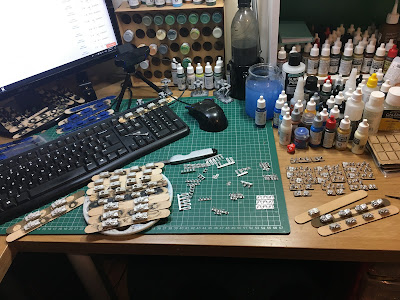 Linked to the 6mm stuff, I won a competition for a £20 voucher from Butlers Printed Models this week. Just a random draw for completing some wargames magazine quiz, but that has gone towards getting some of the BPM 1/285th printed British models.

The model I've finished is my first Dreadnought Stalker for my 3mm army. In the DiD universe these machines are operated by the Cybershadows, who are a breakaway faction of the Novans.

I've painted mine up to be a Reaver Titan proxy for my Ultramarine proxy infantry. I've not gotten a name for it yet, but the model is roughly painted up in Legio Praesagius colours. 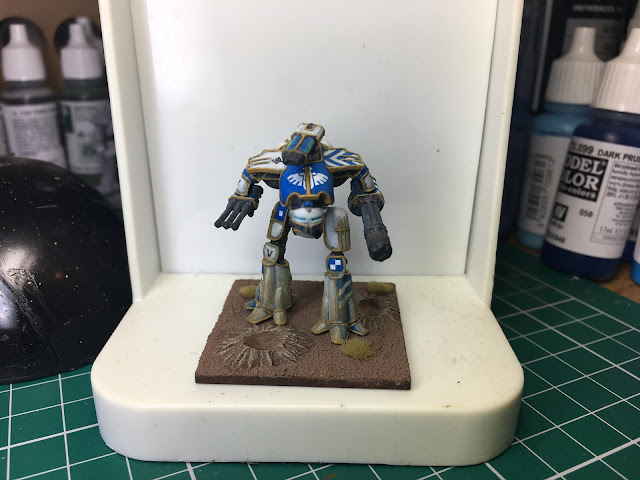 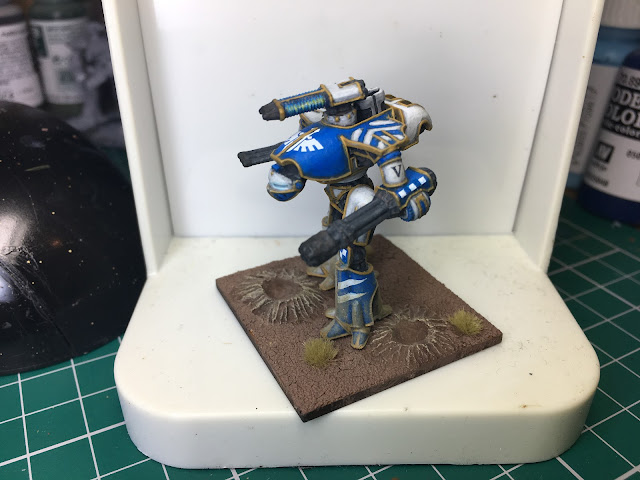 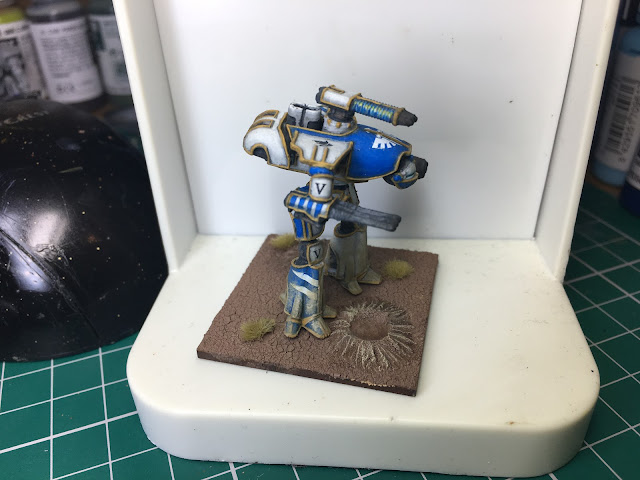 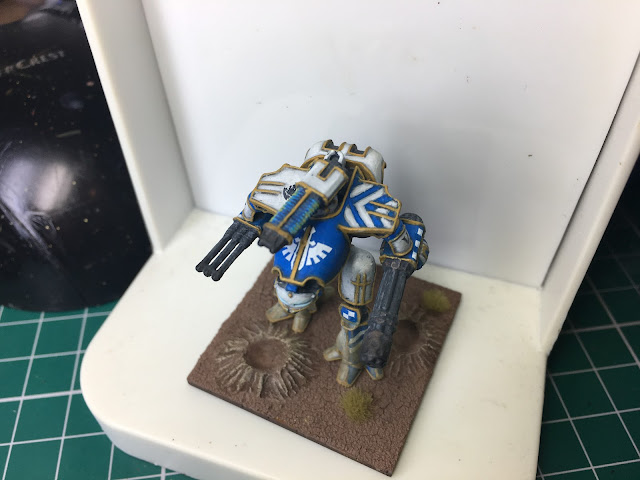 I'm pretty pleased with how it's turned out. I used decals I had from the 40k Primus Marine decal packs I had bought online. I'm waiting for some other bits from Vanguard to see if I can add some banners and stuff, as well as some other decals which might help add some Ad Mech elements. This is one of the early prototype Dreadnought Stalkers, so has a fixed head. I understand the newer ones have variations in leg pose and head options. The models also come with a huge range of weapon loadouts. I've kept mine in keeping with the Legio - lots of precision weapons and anti titan loadouts.

Looking forward to getting some of Vanguards scout stalkers, and hopefully one of their newer style stalkers - a variation on the Dreadnought Stalker seen here.