Battle report to follow, but here's a copy of the player briefing for yesterdays 4th game in the series. One little pick of the table, just to show whats coming! 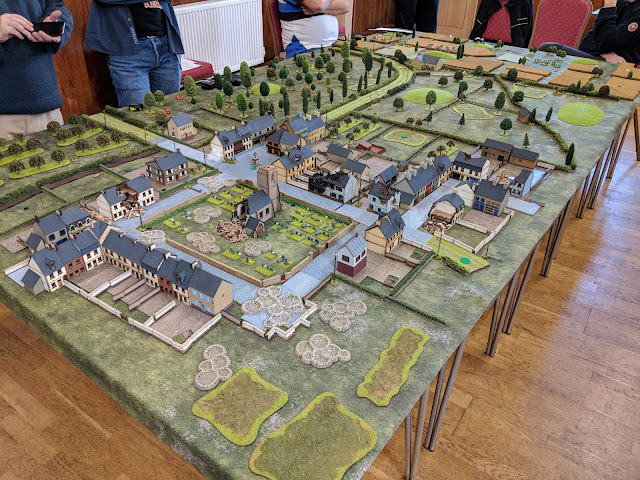 Operation Pomegranate (also known as the Second Battle of the Odon) was a series of operations fought by the British Army in World War II in mid-July 1944 against Panzergruppe West as part of the Battle of Normandy. Operation Pomegranate were intended to draw German attention away from the upcoming assault from the Orne bridgehead, codenamed Operation Goodwood. After four German infantry divisions arrived in Normandy, the objective was to prevent them from replacing German Panzer divisions deployed opposite the British Second Army for operations against the First US Army, which at the time was preparing to break out of the German defenses (Operation Cobra).

Phase I of the attack began at 05:30am on the 16th, with units of 177th Brigade supported by 33rd Armoured Brigade clearing their start lines and advancing. On the right, despite encountering stronger than expected resistance, which saw the leading units taking heavy casualties, 1/6th South Staffs supported by B Squadron 144 RAC have successfully captured their objective (the hamlet of Brettevillette and Quedeville). With this objective in Allied hands, 1/6th South Staffs then switched to the defensive to allow the Phase 2 forces to pass through.

Phase II of the operation began at 1pm, with A Coy 2/6th South Staffs and A Squadron of 144RAC passing through Brettevillette to capture Pt 126 and Noyers Railway Station before pushing through to attack Noyers village from the North. At the same time C Coy 2/6th South Staffs, supported by available tanks from B and C Squadron 144 RAC, advanced from Les Nouillons and attacked towards Noyers village from the East.

Both attacks encountered heavy resistance and stopped short of the village as night fell.  Overnight, efforts by A Coy 2/6th South Staffs to secure a start line to the south of the Railway Station, for a morning attack by 1/6th South Staffs into Noyers, ran into a determined German counter attack, including Panzers and infantry from 9th SS Panzer. Despite muddled and at times hand to hand fighting, the German forces were beaten off and the start line secured. 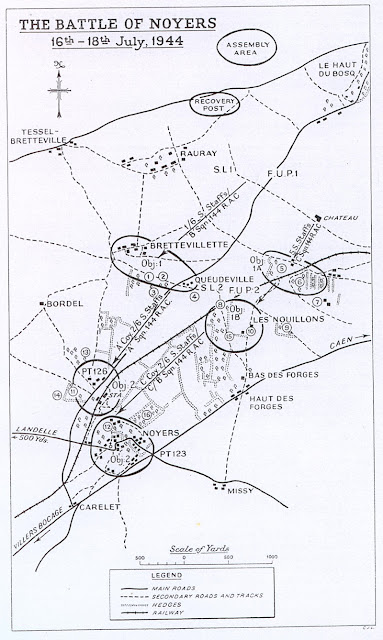 The area around Noyers consists of large crop fields bounded by tall hedgerows. Orchards and sunken lanes are prevalent. Several enemy minefields were discovered and breached during the Phase II operation, further minefields may be encountered on approach to the village.

Infantry from the newly arrived 277th Infantry Division are confirmed to have taken up prepared defensive positions in the Noyers area. This Division has newly arrived in Normandy, and is believed to have been transferred from coastal defence duties in Southern France. Yesterday’s fighting has shown that they are heavily supported by dug in and concealed anti-tank guns - dug in infantry and machine gun positions also offered heavier than expected resistance. SS infantry units appear to be reinforcing German Army units. The enemy has deployed minefields as part of his defensive network.  Enemy Self Propelled A/T guns were engaged and destroyed during the fighting yesterday, as was a single Panther from 9th SS Panzer Division. Overnight, Panzers from 9th SS Panzer Division launched localised counter attacks. Several were knocked out, but intelligence places more in the area.

C Coy 2/6th South Staffs, supported by B Squadron 144RAC, are to advance from Les Nouillons SOUTH WEST across country and attack Noyers from the EAST.

B Coy 1/6th South Staffs, supported by C Squadron 144RAC, are to advance from PT126 SOUTH and attack Noyers from the NORTH.
As such, objectives will be: