Next Project - and AHPC nomination

So, having finished the AHPC challenge for this year, I've had a couple of weeks of 'admin' which has consisted of sorting through my recent Ebay purchases and figuring out what I wanted to do next.

As ever, I have a lot of options. I'd narrowed the list down to three options, which were to do SS Armour, Polish Cromwells or my 2nd Derbyshire Yeomanry Humbers. I decided, since in the last couple of 'mega' games I've run I've had to borrow German tanks, that I should get my 12th SS armoured vehicles done, which will provide some opposition to both my Brits and DaveD's rapidly expanding American army. And, as I've managed to spread the madness further, Martin's British Paras! Apparently, we are now doing D-Day....

As such, I've been building, detailing and spray priming a load of German armoured vehicles: 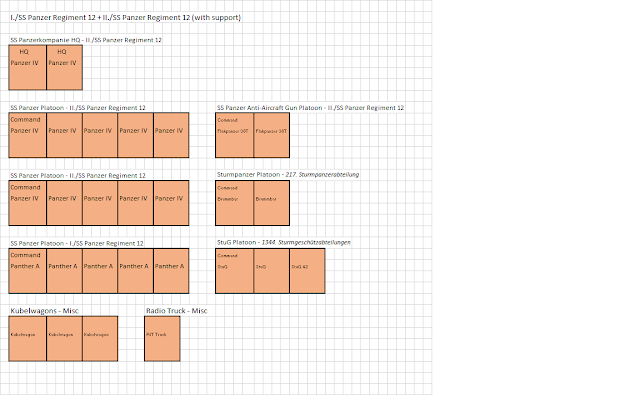 I'm aiming to tackle things this way in order to keep some consistency of painting for the various units - although there will be variation, there won't be the same amount of variation as I would have if I painted the units 6 months apart. If i can get all of the above done in 4 months, I would be pretty happy - hopefully I'll make better progress than that!

In other news, with the AHPC finished there are some more voting rounds. Much to my astonishment it seems some kind souls have nominated my German artillery for inclusion in the 'Challengers Choice' vote. I can't say how chuffed I am at that, given the quality of the other entries that have been nominated. I don't expect to be winning anything, but it's really nice that someone felt my work was worth nominating! If you want to check out the other entries (and cast your own votes) you can find the blog post here: https://thepaintingchallenge.blogspot.co.uk/2018/03/ahpc-viii-challegers-choice-nominations.html

Finished!: A Gaggle of 88's and the AHPC VIII Challenge!

I hadn't realised I'd fallen so far behind with the blog posts. The last couple of weeks were a bit of a blur as I tried to get everything I wanted done for the challenge ending on the 20th.

My 3mm Sci Fi stalkers also achieved 4th place in the voting, so thanks to those of you who took the time to vote for me! I also completed just over 1000 points worth of entries, against a target of 700! 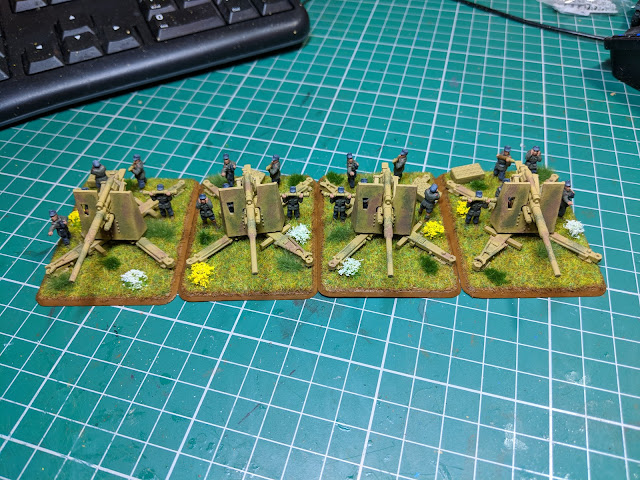 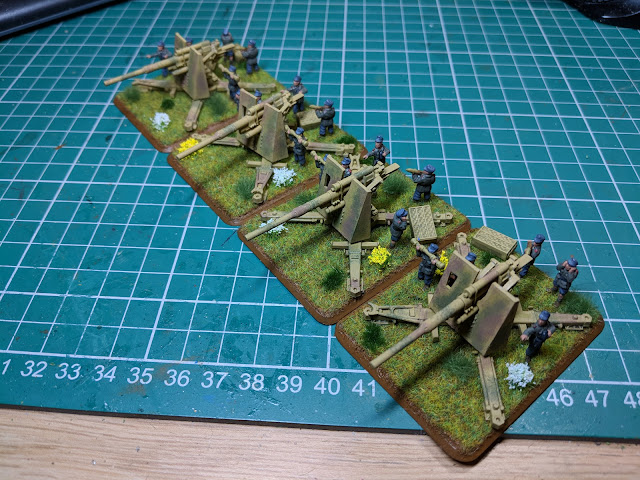 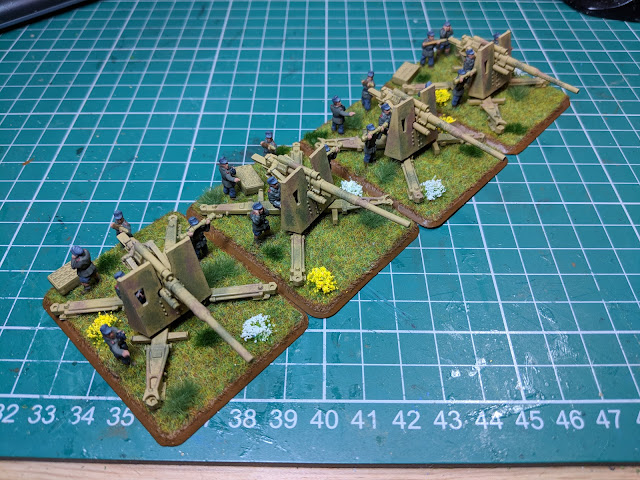 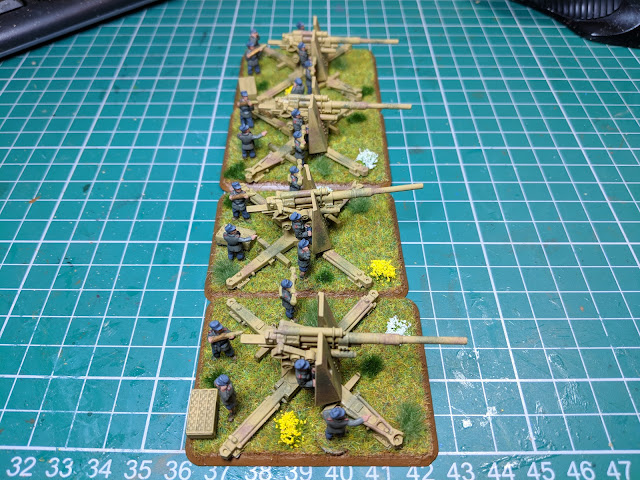 These are painted up to be troops from III Flak Corps, who provided in depth AA defences for German forces around Caen. Some of these batteries would have been encountered as the Polish and Canadian Armoured Divisions penetrated the German defensive lines. I've a long term plan to have an ability to field a III Flak Corps army, using AA guns as troop choices and support from lots of Reluctant Trained rifle platoons (Cooks, clerks, gunners with no guns, etc).

Models are the plastic 15mm scale 88's from the new range of Battlefront plastics. This means that one of the crew figures on each gun is in shorts... but it's not too noticeable. No loader teams or anything for these guys, as the figures don't come with the models.

Next up, some more Heer guns: 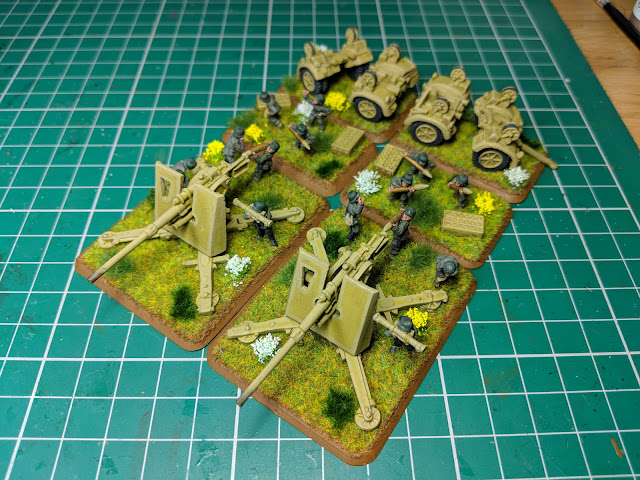 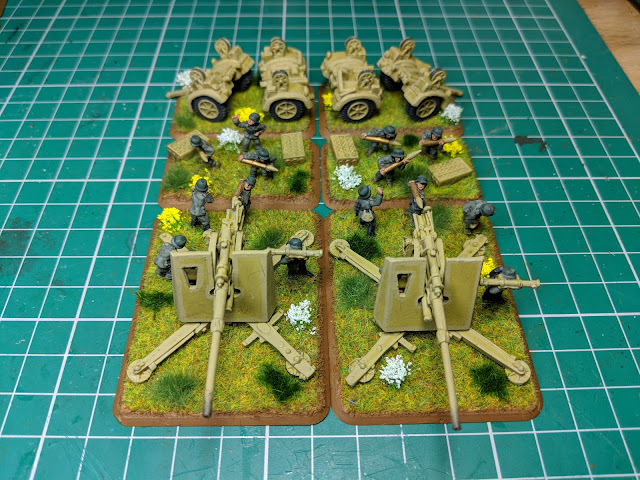 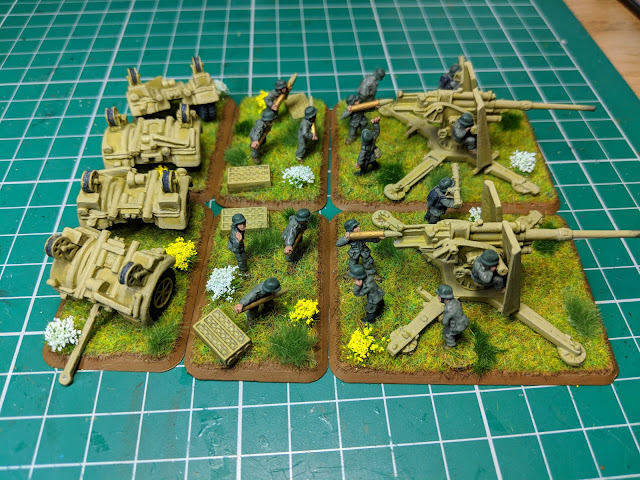 These are for my 89.Infanterie-Division troops, and compliment the other 2 guns I have painted for them already. I've not quite finished with them, having some loose ammo and shell casings to add, and shoulder tabs to paint. But they are 'table ready' so counted for the challenge!

Various sources I have indicate that the division had a battery of 88's instead of one of the regular artillery batteries. So these would be used in an artillery role as well as a direct A/T role in some of our bigger games.

These are 15mm scale metal guns from Battlefront, which come with loading teams and the wheels for the guns. 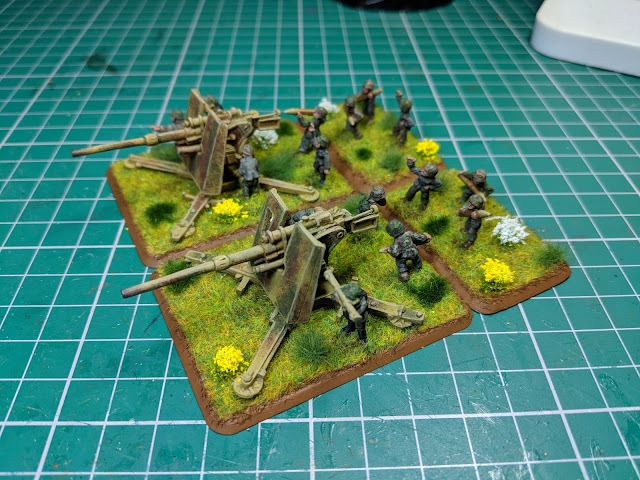 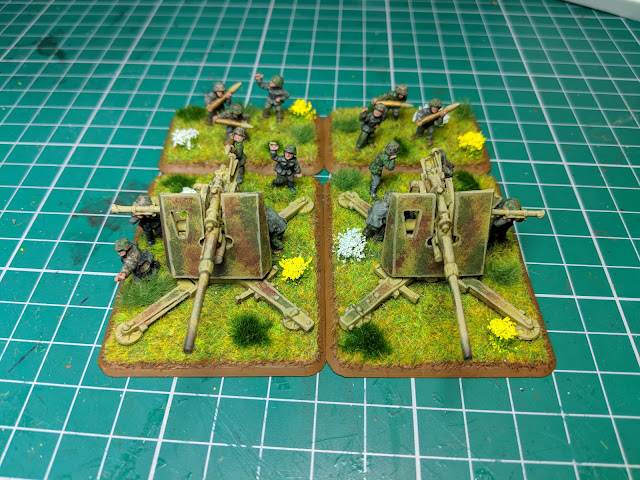 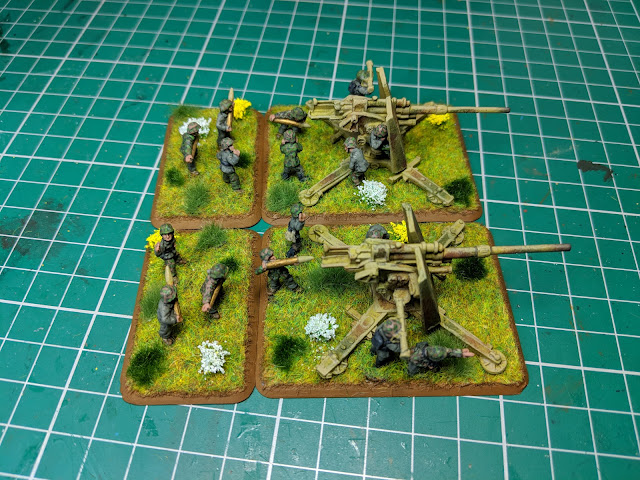 Similar to what I did with the Nebelwerfers, I did some light conversion work on the crew for these guns. Trimming off shoulder tabs on the ones with camo tops on and adding green stuff helmet covers to them all. I then used the same idea of having very mixed camo clothing, with three different types (roughly) present and no 1 man wearing a full set.

These were 2nd hand (at least!) guns I bought at the Stockton wargames show last year, and were missing crew and some other bits. One of the guns is lacking a sitting figure, but he's just out of his seat.... I replaced the man with another standing figure so the crew is the correct size. I scrounged the figures to make up the loading teams, but no wheel sets for these. I also tried to go heavier on the camo on the guns, again to match in with the Neberlwerfers i had done for the SS.

I've also still got shoulder tabs to colour for these guys, and ammo boxes, loose ammo and spent shell cases to add.

So, with these guns done, that puts my total number of guns painted since December as 35! 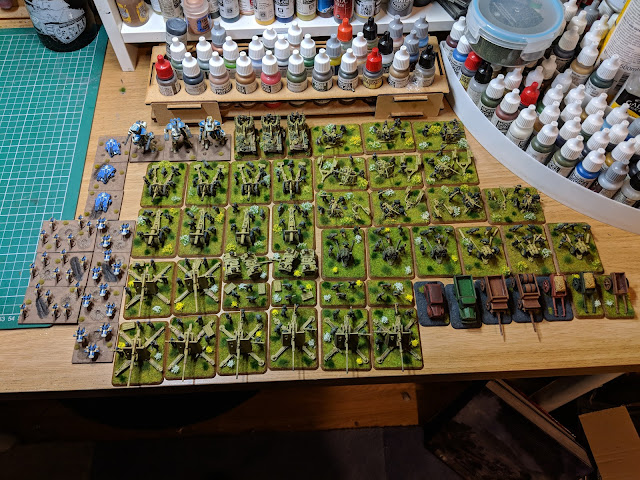 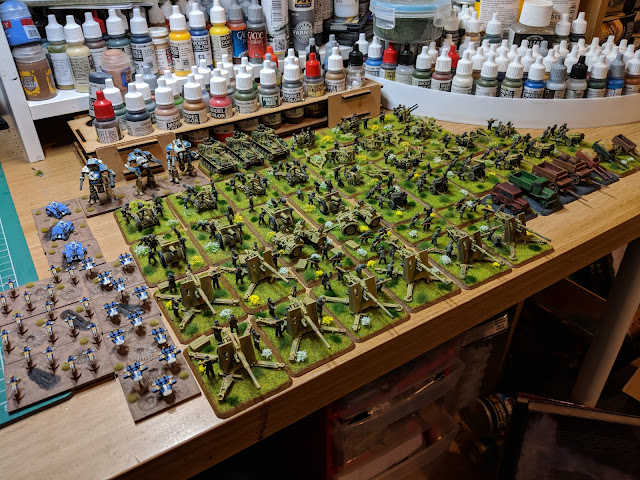 I also painted a fair bit of terrain during the challenge, which isn't pictured above. I'm pretty happy with my output, but then it's a case of one step forward, two back. I've made a lot of Ebay purchases recently thanks to a gentleman called Pete who was selling off his collection of FoW stuff - most of which fitted with the Normandy time frame I focus on. As such, I have substantially added to my unpainted collection. If I vanish, it's because Amy has found out and I've become part of the garden.

Now the challenge is over, I'm into a bit of a planning stage. I'm currently thinking that I'm going to focus on some German armour for my SS force. First step will be to make a 'Admiral Drax' painting chart, and see where I go from there!

A slight change in direction for me this last week. I was (and am) supposed to be painting my German 88's but following the big game the other week I had a bit of a break from 15's!

Instead I focused on getting some of the 3mm Vanguard Miniatures 'Defeat in Detail' models that have been sitting on my desk for the whole painting challenge. Specifically two 'Dreadnought' class Stalkers and one 'Jaeger' class hunter/ambush Stalker. These will be proxying for different 'marks' of Reaver Titans for my Legio Presagios force. The Dreadnought's are pretty close to a 'Reaver Type' look, while the Jaeger is close but different - an older type from the Dark Age of Technology who's origins have been lost. 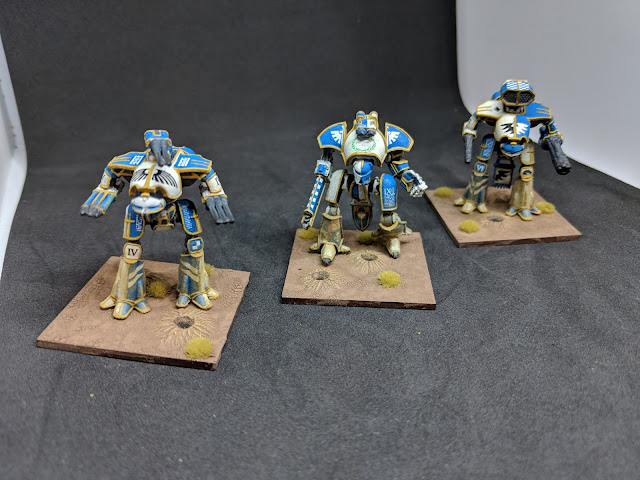 These models were entered into the AHPC8 themed round last weekend, and are now available to be voted for here! All votes in my favour would be very much appreciated (the voting panel is on the right of that link, but if your on a mobile or tablet you'll have to go to the bottom of the page and click 'view web version' to make it appear)!

I also finished off 3 super heavy tanks for my Novan Elites. Specifically 'Challenger' Super Heavy Tanks from Vanguards 3mm range. These will be proxying as Ultramarine Legion Fellblades. Shown below with an infantry base for scale! I think I said on the AHPC blog post that the Novan Elites are 7 meters tall, but they are not - more like 7 feet tall!

The force I've collected as a whole is growing, with the majority of the models from Vanguard but with a few 3D printed from elsewhere. 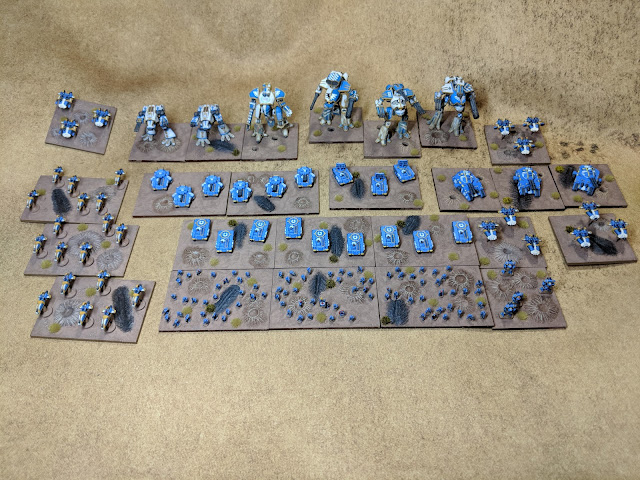 I've still got a lot to paint, including more Stalkers, infantry and tanks from Vanguard. The plan is to have a decent sized Ultramarine proxy force for the Battle of Calth. At some point, I'll have the Word Bearers to do (in their... white and blue... scheme!)
Posted by James MacCraggs at 21:37:00 6 comments: