Busy week last week, having finished off my German armour for now, I switched out for some terrain. My plan had been to build my Chateau and a 4Ground hotel. However, after I built the Sarrisa Chateau I realised that the hotel model is actually 10mm scale. Bugger. That's what you get for buying quickly at wargames shows. So if anyone wants a cheap 10mm MDF building, let me know...

I also dug out the Warbases resin haystacks I picked up recently and slapped some paint on them. More scatter terrain - always handy to have. 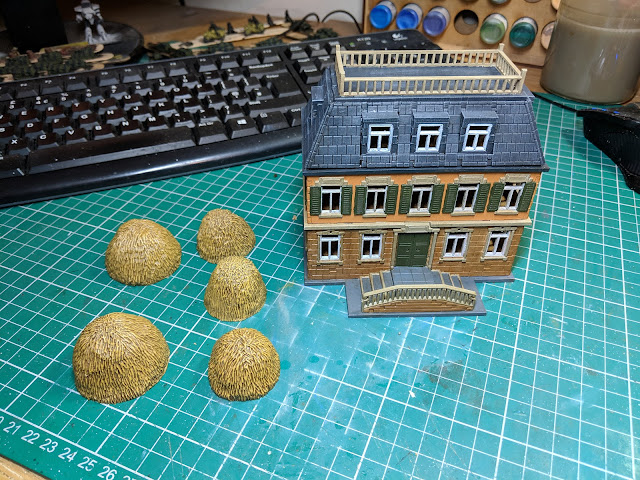 The Chateau looks a bit big in comparison to some of the other buildings I have, but I think that can be passed off just through it being a fancy building.

I have to say it was a bit of a bugger to put together, the roof especially as the parts just did not want to fit well. I ended up having to use some filler to cover gaps. Once painted though, it looks pretty impressive. I had finished, but decided to colour the window frames as only the 2nd floor was coloured grey, and i think it looks much smarter with the light frames.

The haystacks I just hit with a grey primer, US field drab then drybrushes of gold brown then buff.

Showing off as well a recent purchase: 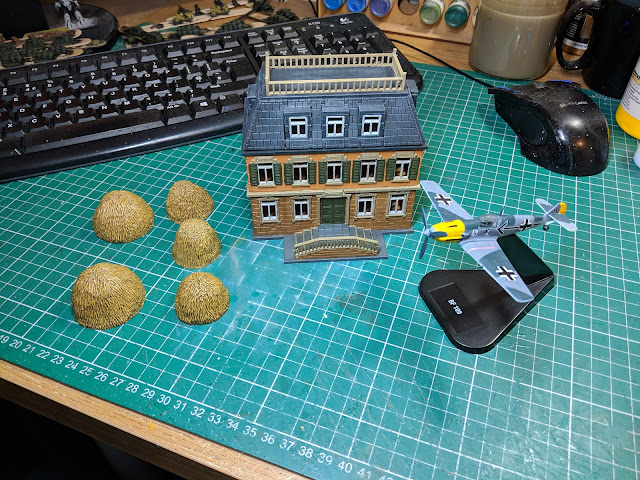 Which is a 1/100th scale Me109 - it'll just be a good physical representation for the occasional Luftwaffe airstrike.

My next lot of models will be my 6mm UK Moderns - which have sat on the painting shelf for 12 months or so. Basing for this lot will be a task in of itself...
Posted by James MacCraggs at 00:08:00