Not too long back from an enjoyable days spent down at Carluke and Law wargames club. Young David picked me up - after a morning spent revisiting my army list and attempting to find the figures I needed from the shelf (failing, as on unpacking I was missing several command team Universal Carriers and my Mortar Spotting teams).

The idea of playing a 4 player game (a bring everything you have affair) was scrapped as I understand we were asked to accommodate another 2 players. Young David replied that we couldn't - so the other guys decided to play 10mm Napoleonics. As it happened my fears of not knowing the rules well enough were well founded. 1000pts each turned out to be enough when we spent a lot of the game checking rules. Not sure that a larger game with more players would have worked.

So, to start. My army from the Overlord book, consisting of troops from the 51st Highland Division (Reluctant Veterans):


I don't have a copy of Young Davids army list, but from memory it was along the lines of:


I tried to take some pictures as we went along but as usual managed to miss the important ones (like the layout of the whole table).

We placed two objective markers on the exit roads from Davids side of the table. He deployed one Infantry platoon and his Pak 40's on my left flank, dug in along a hilltop and into a wood. On the right he deployed his infantry in one of the tall buildings and along the hill top, supported by his Marder platoon. 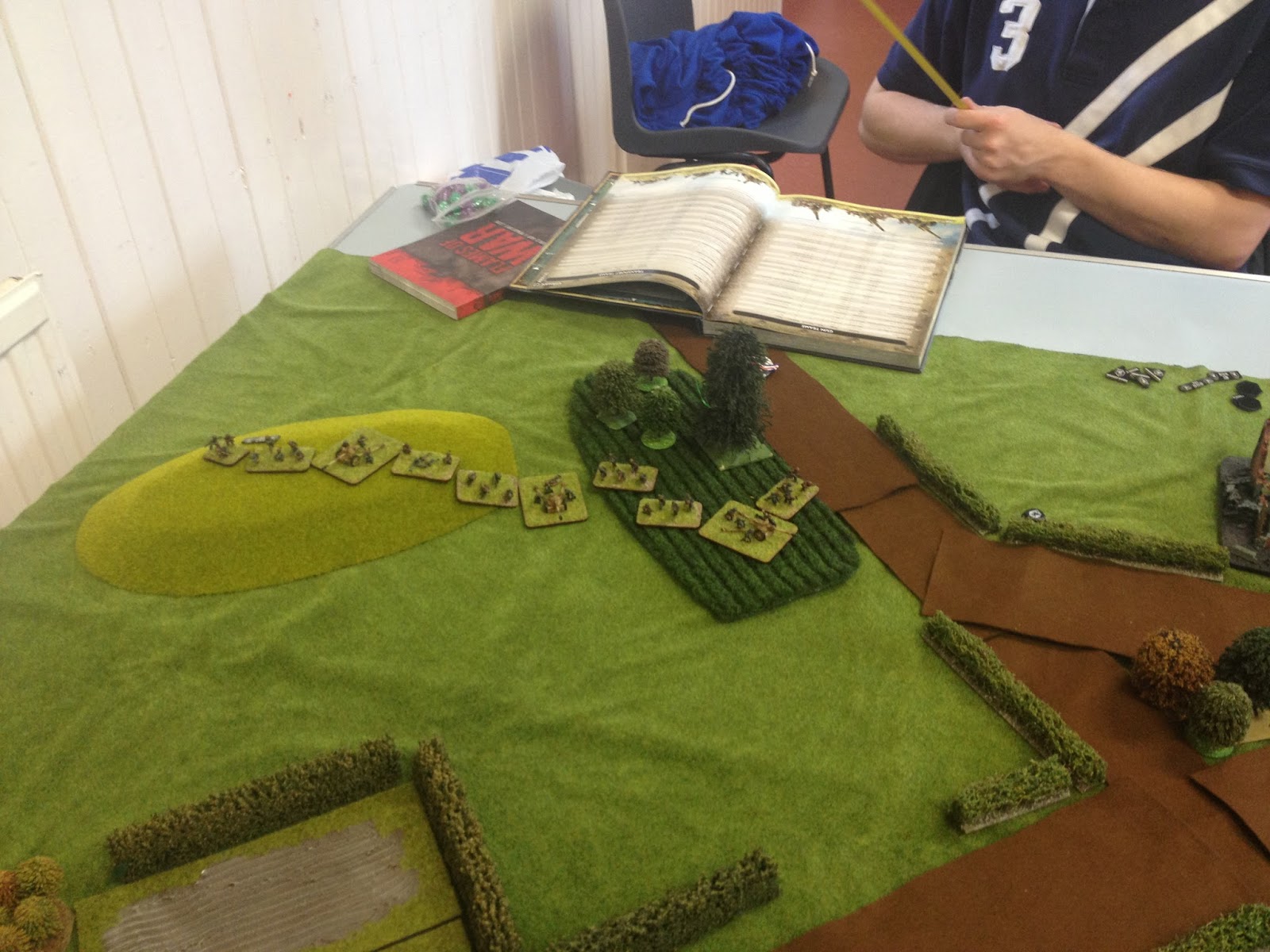 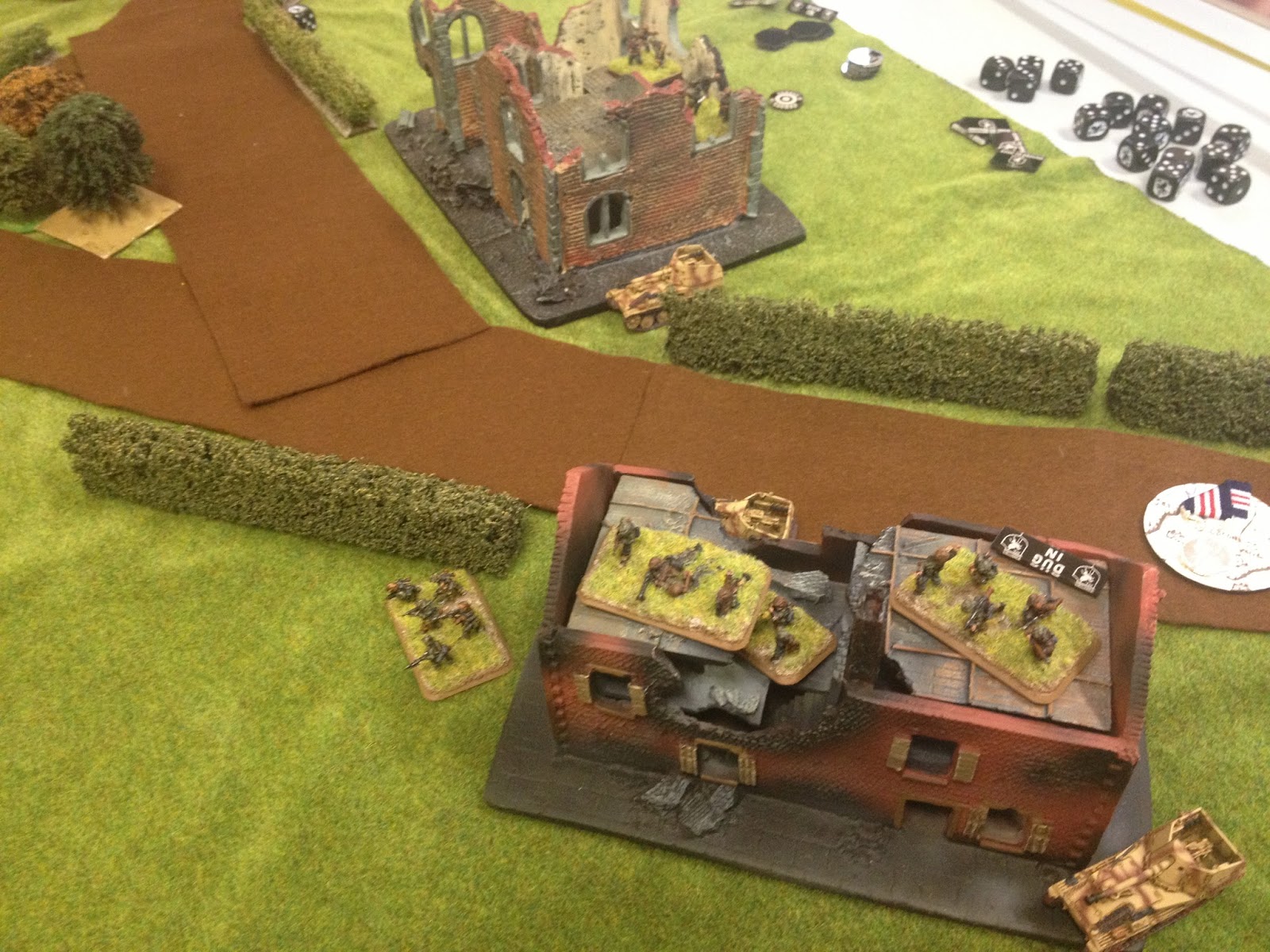 On my side, I deployed my Sherman platoon on the right flank along with one Infantry platoon in it's Kangeroos.

Note that the Kangeroos are used despite not being quite finished yet.

My centre consisted of my Mortar Platoon (deployed) and my Anti Tank platoon advancing up the road. I split the Mortar Observer teams up, issuing one to each Infantry Platoon and one to support the MMG squads. We agreed that it would make sense that the OP units would ride in the Kangeroos. 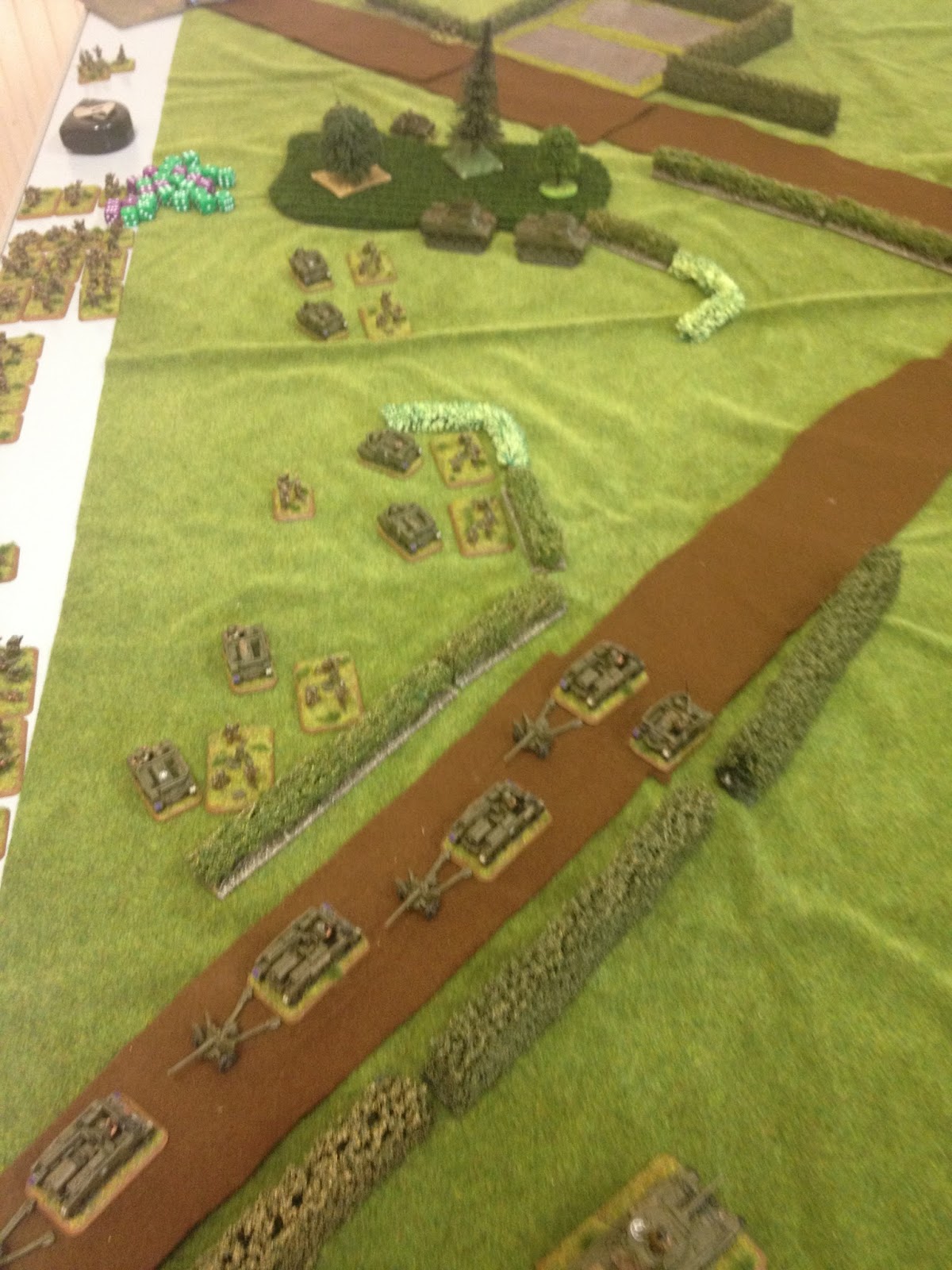 My other Infantry platoon deploys in it's Kangeroos on the left flank, beside the wood. The MMG platoon on the other side of the wood ready to cover the German Infantry and A/T guns on the left. 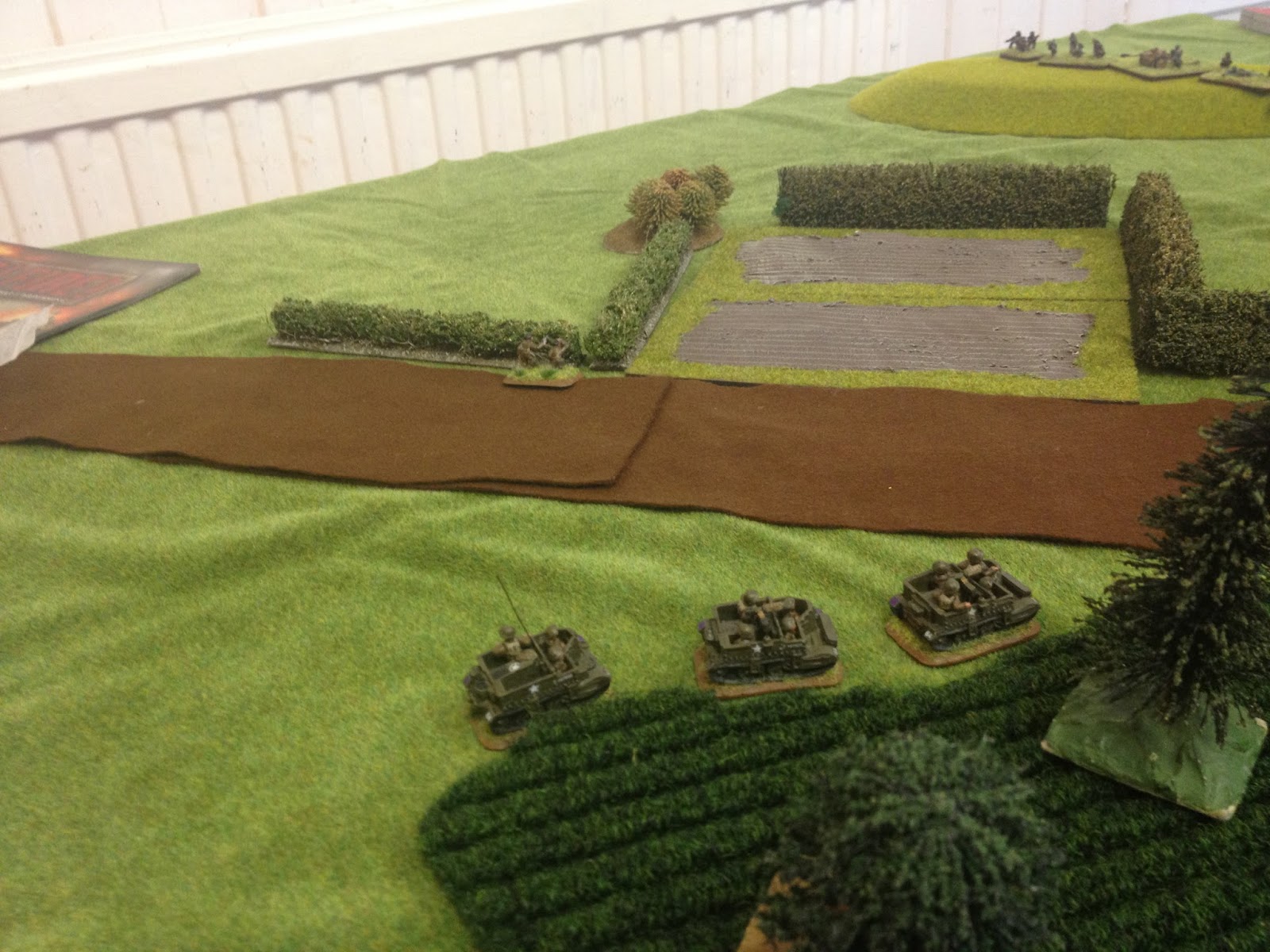 We rolled for first turn, and David got to go first. He began by putting a couple of Pak40 shells into my leading Kangeroo on the left flank. However, on discussing and getting down to eye level, we realised that the only part of the APC visible was the .50 machine gun. So we rewound a little bit.

With little to do but try a few long distance A/T shots against my Shermans, it was my turn.

There was a little confusion over the rules around disembarking from transports on my behalf - I didn't realise troops could only debus at the start of the transports units movement. Kangeroos and MMG unit headed left, risking fire from the Marders up the road (as it happened, the Marders were more worried about the advancing Shermans). 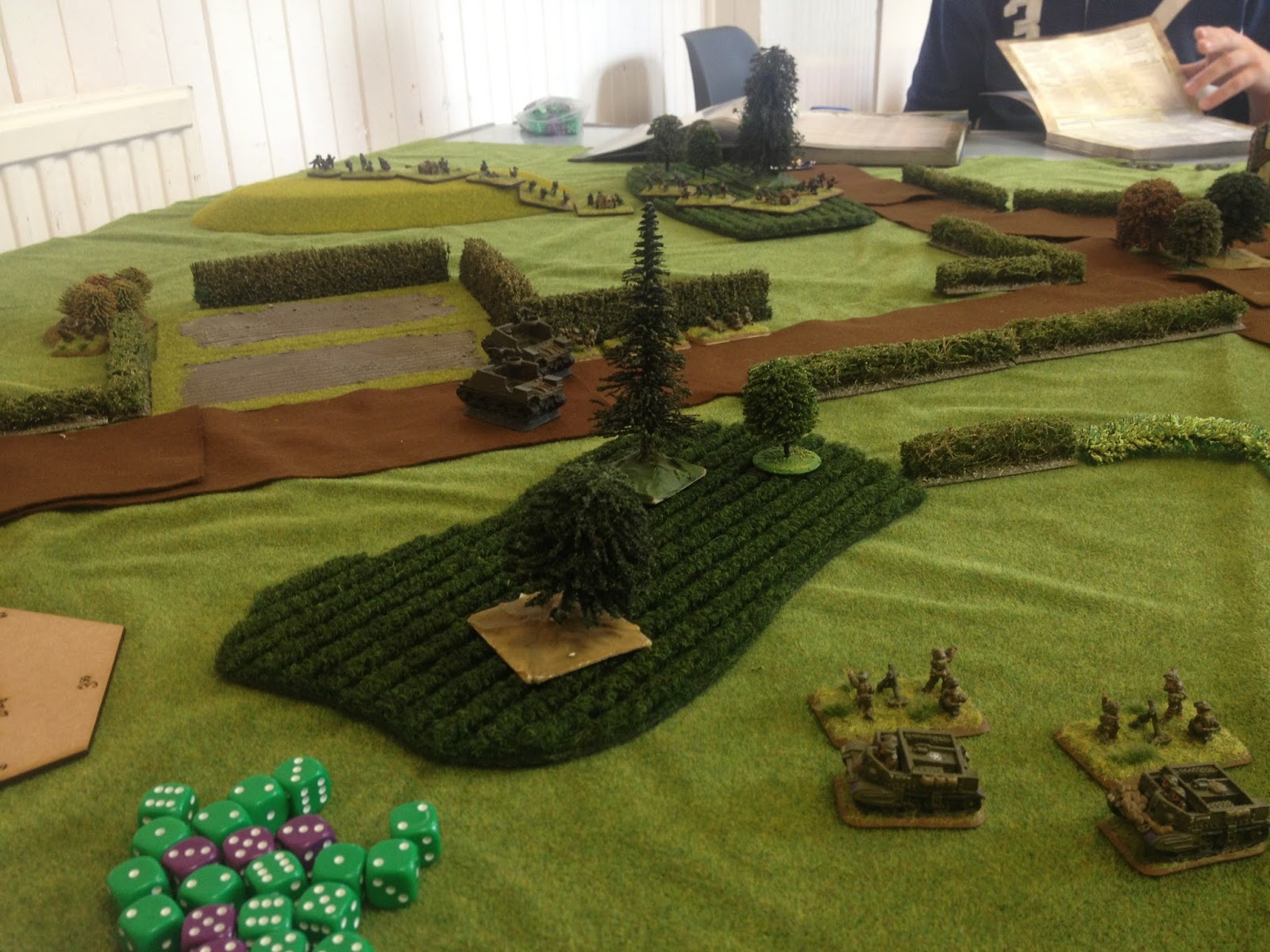 On the right my Shermans and Kangeroos advanced towards the hill and the forest just short of the buildings. I made a mistake of leaving my Firefly stationary to take some shots at the only Marder in sight. 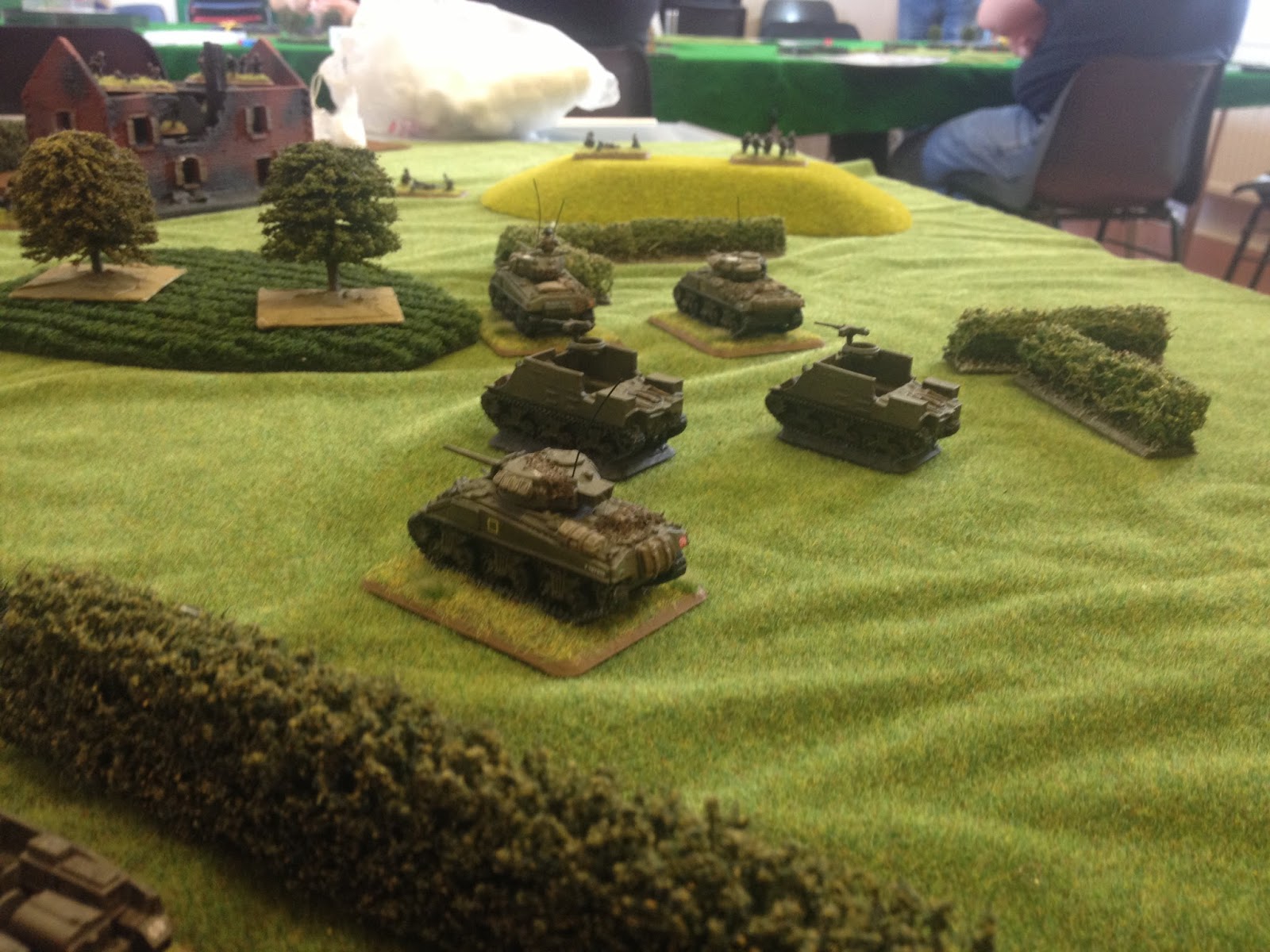 However, I forgot I had done this and fired my leading Sherman. With a billow of smoke and flame the first Marder succumbs. 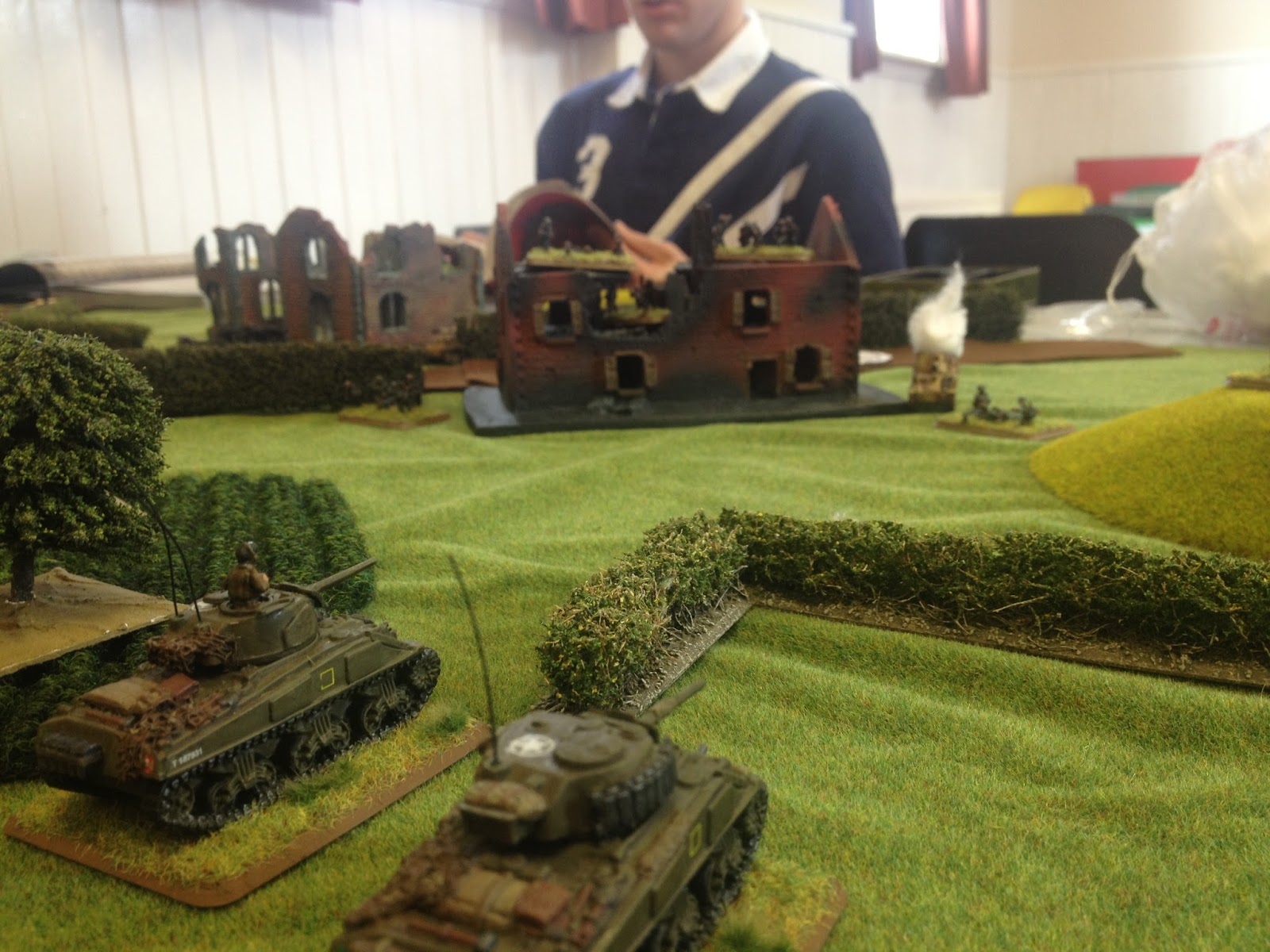 On the left flank my Mortars brought down tentative fire against the hilltop and the dug in German forces there. (lots of rules reading here, but it went much more smoothly than I thought it would).

On Davids turn he held his fire on the left, with few targets due to the thick bocage. On the right, he moved his Marders around the building to try and counter the advancing Shermans. A Marder tentatively noses round a corner and with a crack from it's high velocity 75mm gun, a Sherman grinds to a halt. The crew bailing from the stricken tank as fire erupts within and it's ammo begins to cook off. 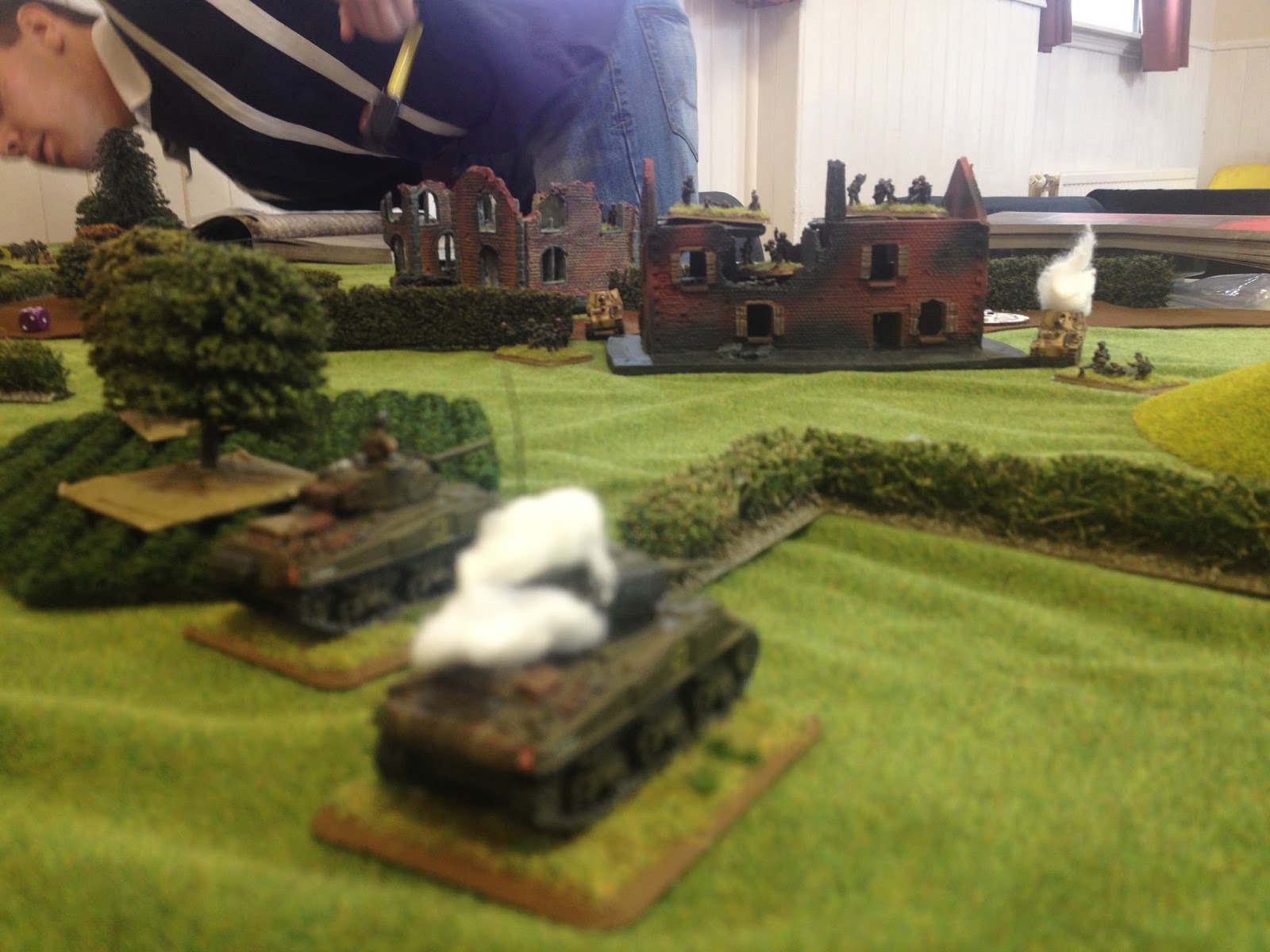 My turn begins with a repositioning of my Shermans to engage the new threat and cover the approach of the third Marder, at this stage still behind the building. We spoke about this afterwards and David was very unimpressed with these vehicles - even going so far as to have a look at army lists that allowed him more medium towed anti tank guns. We did agree that if the Marders had been able to fire all in one turn my Shermans would have been toast, and that being able to take them on one at a time (and his poor luck with the dice) made things a lot easier for me.

In the centre my Anti Tank guns had unlimbered in case of any threats from the Marders, but with them tied up with the Shermans they began to shell the German occupied building.

On the left, my Infantry platoon debussed from it's Kangeroos (which promptly headed for the rear) and advanced across the plowed field towards the bocage and distant enemy. On the right, my Kangeroos moved to a position that they could unload their precious cargo into the forest in the following turn. 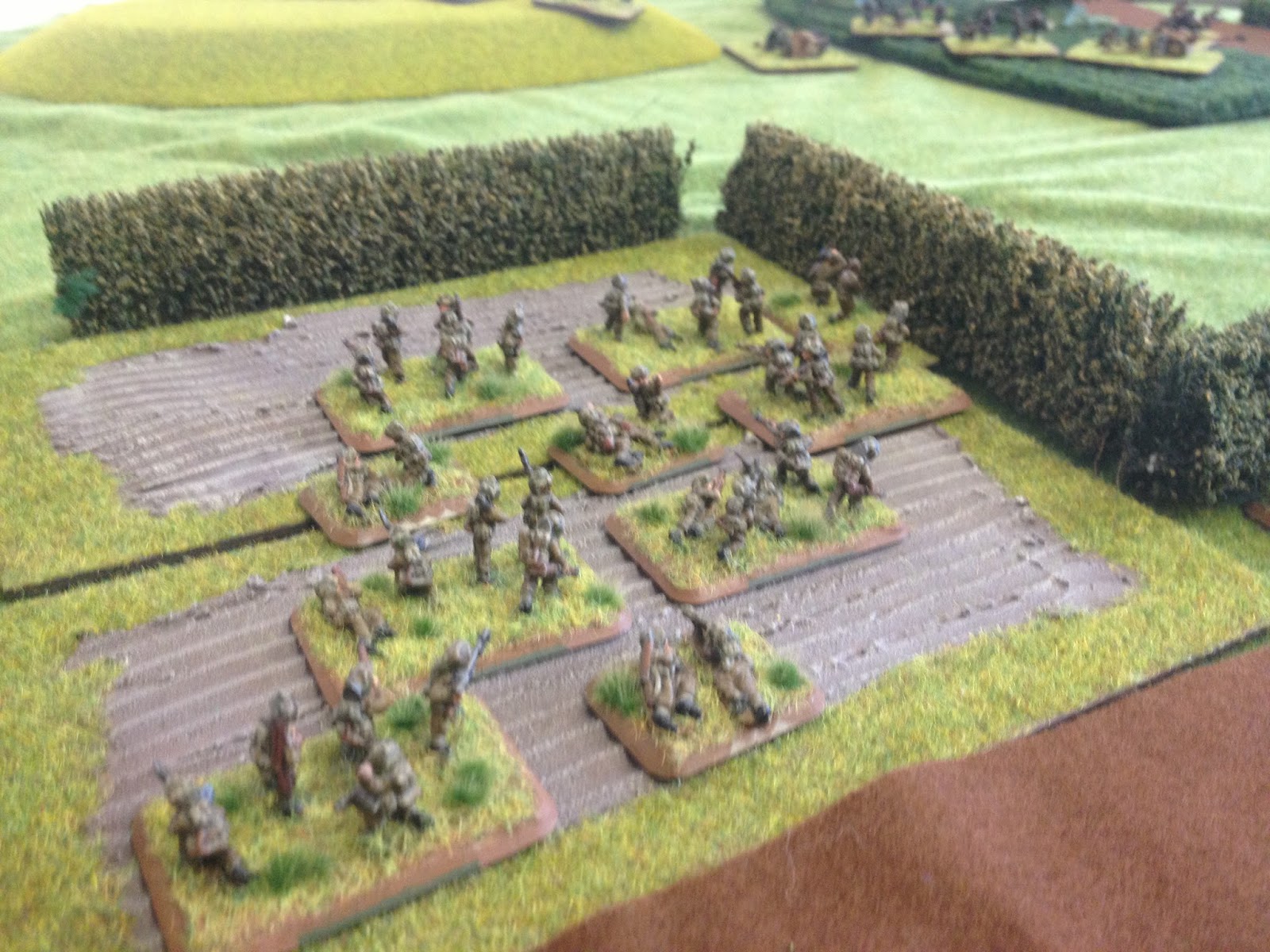 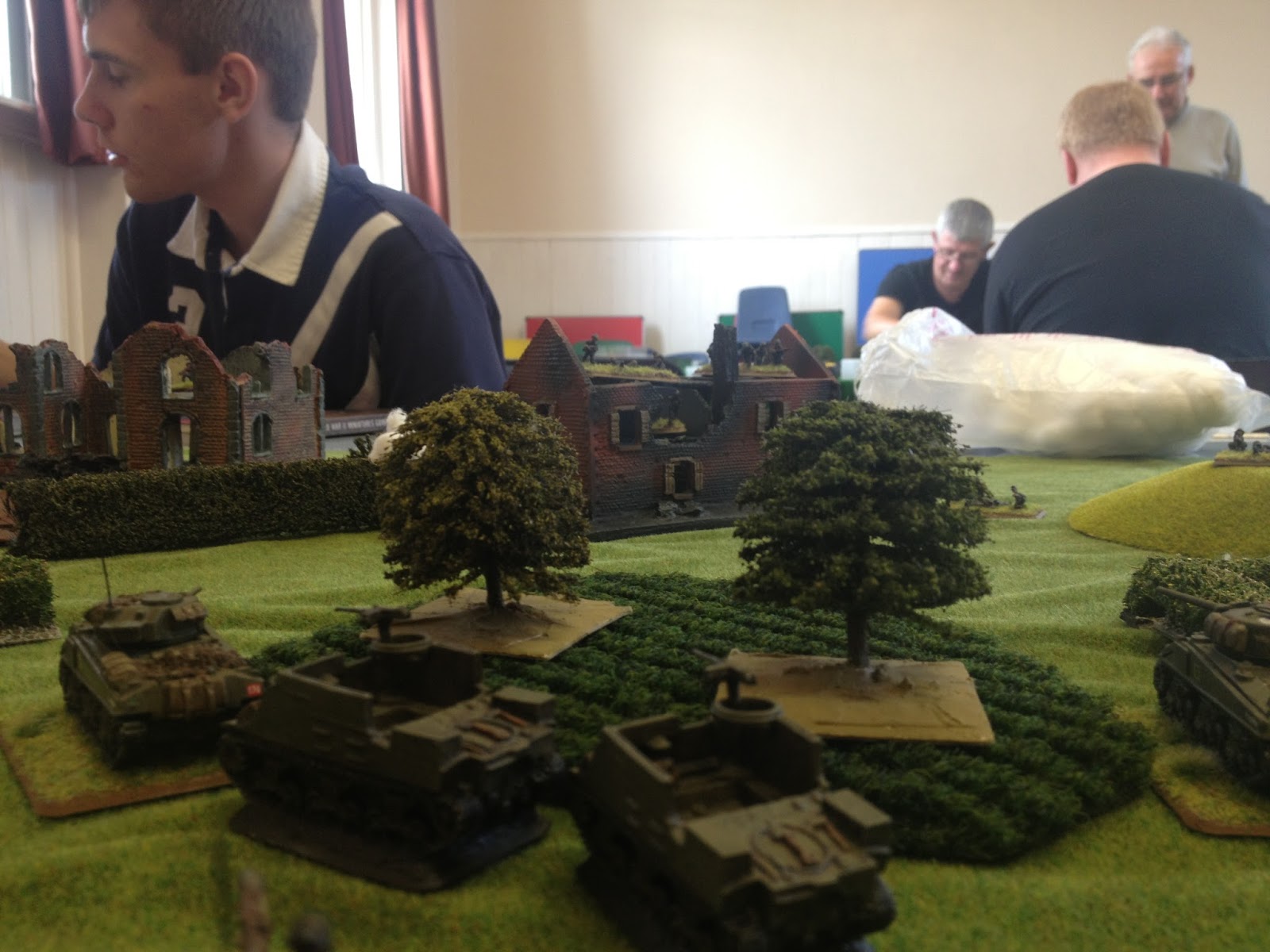 On to shooting, and on the left my Vickers team began what would be a constant barrage of machine gun fire against the German infantry and guns dug in on the hilltop. This included a barrage using the British MMG special rules - it wasn't till later in the game when we realised that one hit on a unit from an artillery bombardment causes pinning that we discovered the value of this tactic. The Mortars also brought down fire on the hilltop, causing the German infantry a few casualties and causing pinning.

My Shermans, having lost one of their number to a Marder, turned their attentions on to this new threat and the infantry in the building. With another bone shaking wham, the command Sherman puts a round into the second Marder, brewing it up as well. 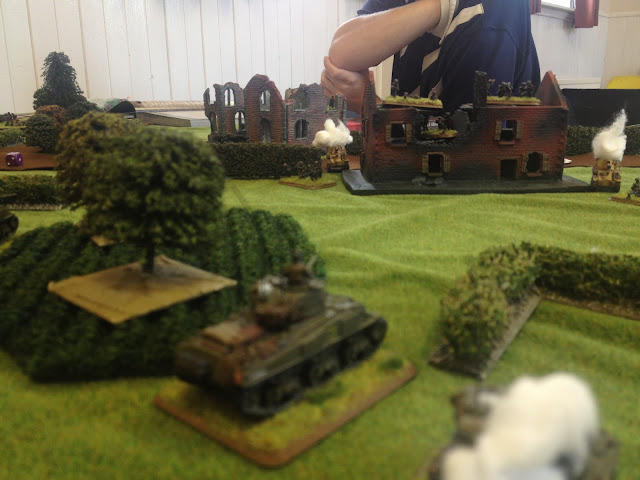 We had both been unsure about the angle of this shot and the tree line - David thought it was fine, I wasn't sure so we diced for it. The Dice said OK, go for it!

Davids movement was again short. The third Marder edged round the right of the building, sending a shot flashing past the command Sherman, thankfully missing.

On the left his infantry and guns opened up on the Vickers teams - the value of the bocage became apparent as despite numerous hits the bulletproof cover of the earthen bank saved the squads.

Back to my turn, the Kangeroos on the right flank unloaded into the forest, providing the infantry with a concealed jump off point for their assault on the German held building. By this point I realised that shooting at dug in Veteran infantry was a fools game, and direct assault was the only way to shift them. 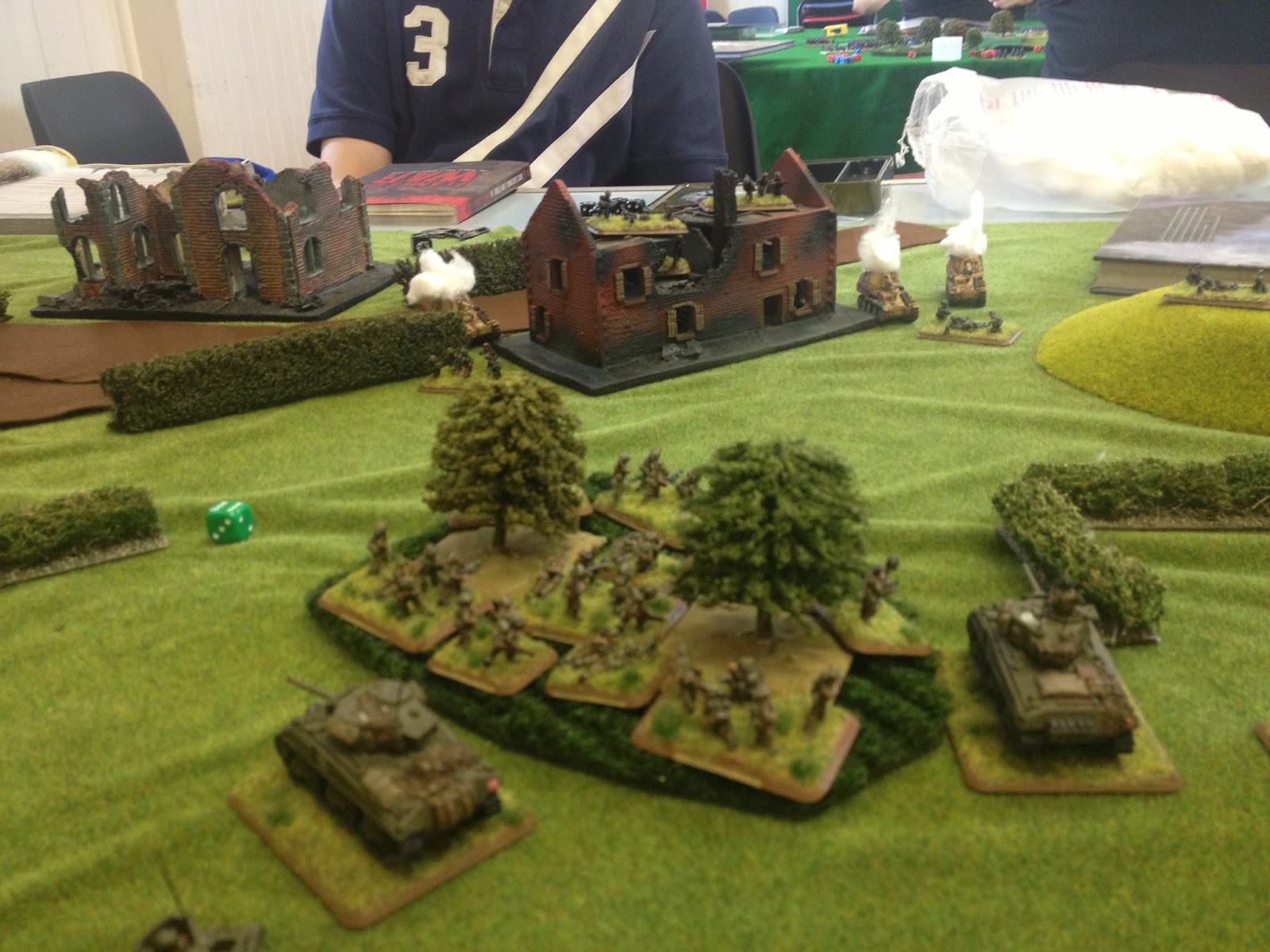 On the left, my infantry made it to the bocage line. In Davids turn they received a barrage of fire that caused few casualties but pins platoon down behind their new found cover. 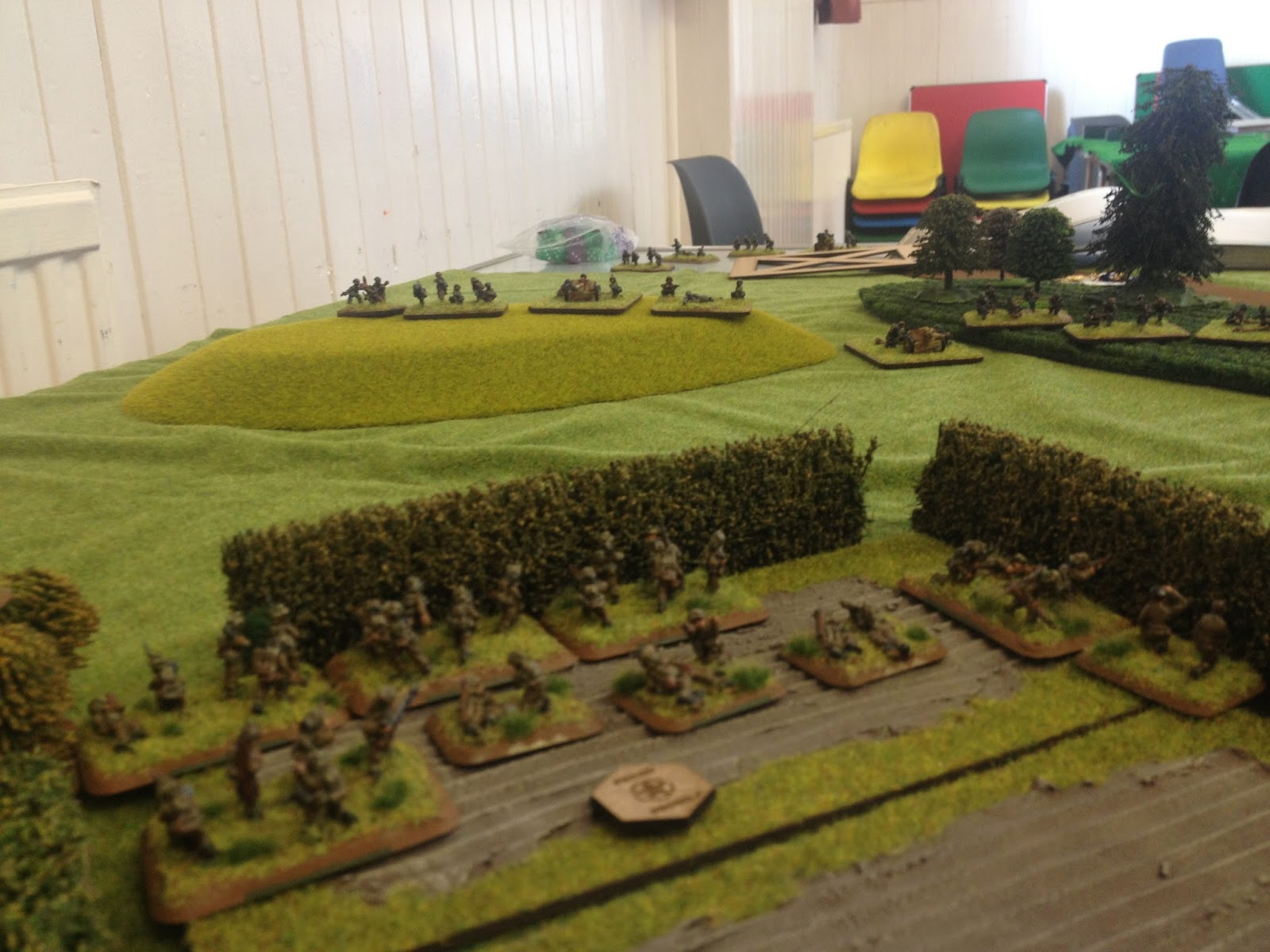 The Vickers continue to chatter away at the dug in Germans. By now they should have some decent sized piles of brass at the bottom of that embankment!

On the right, the commander of my lead Sherman barks orders into the intercom. The Shermans turret rolls round, stops, and the 75mm gun barks twice. Two AP shells hit the remaining Marder and its crew abandon their vehicle and head for the rear as their chariot erupts in flame! The Sherman troops command vehicle putting paid to all three of the enemy AFV's. 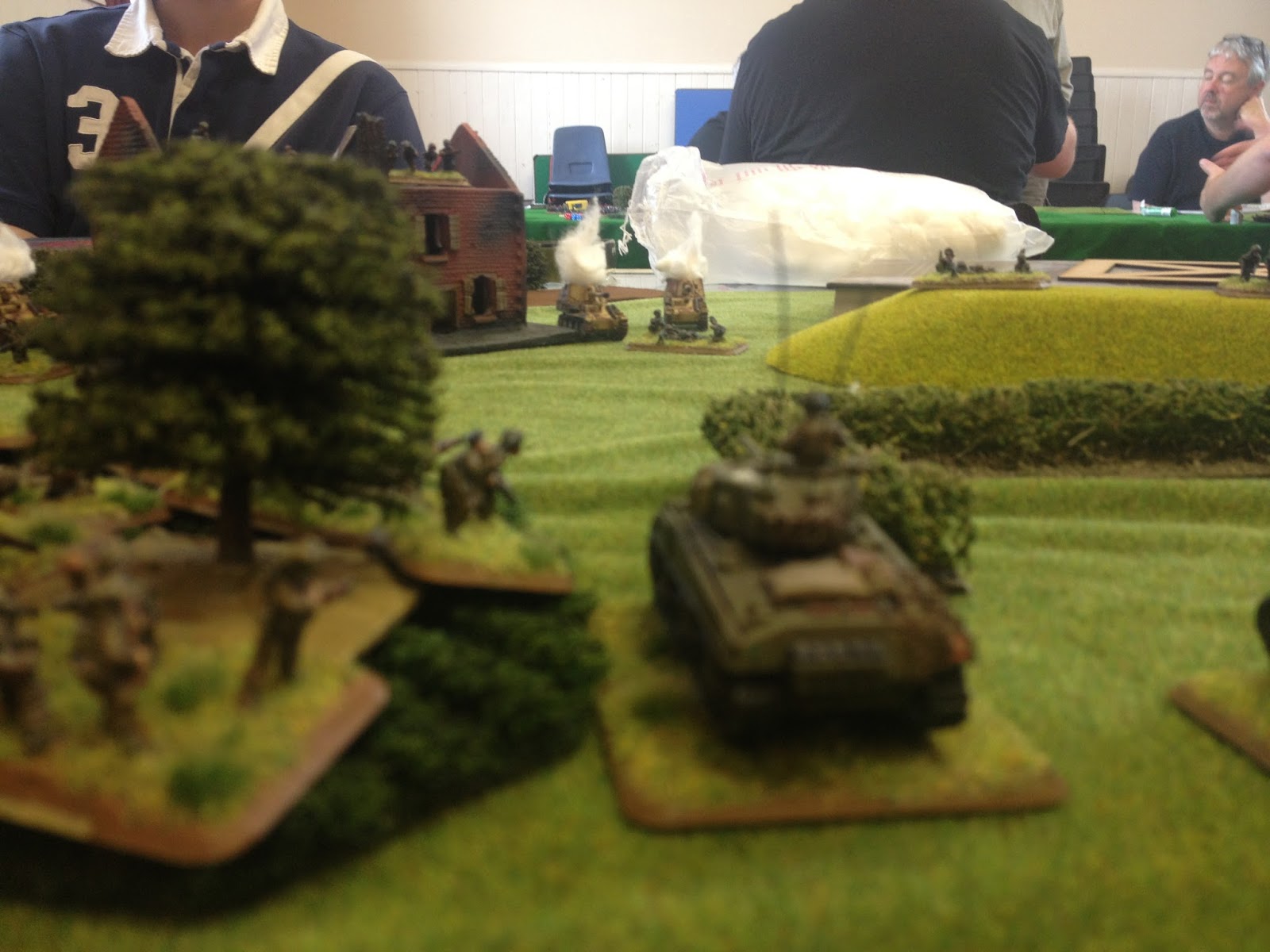 The other Shermans pour machine gun and 75mm fire on the dug in German platoon in the building. Adding to this the mortar spotter calls down all six tubes on the building and the 6 pounders fire HE at it. The British infantry began snapping shots off as they advance, and under all this fire the German hunker down, pinned.

The view from a passing  B17 raid! 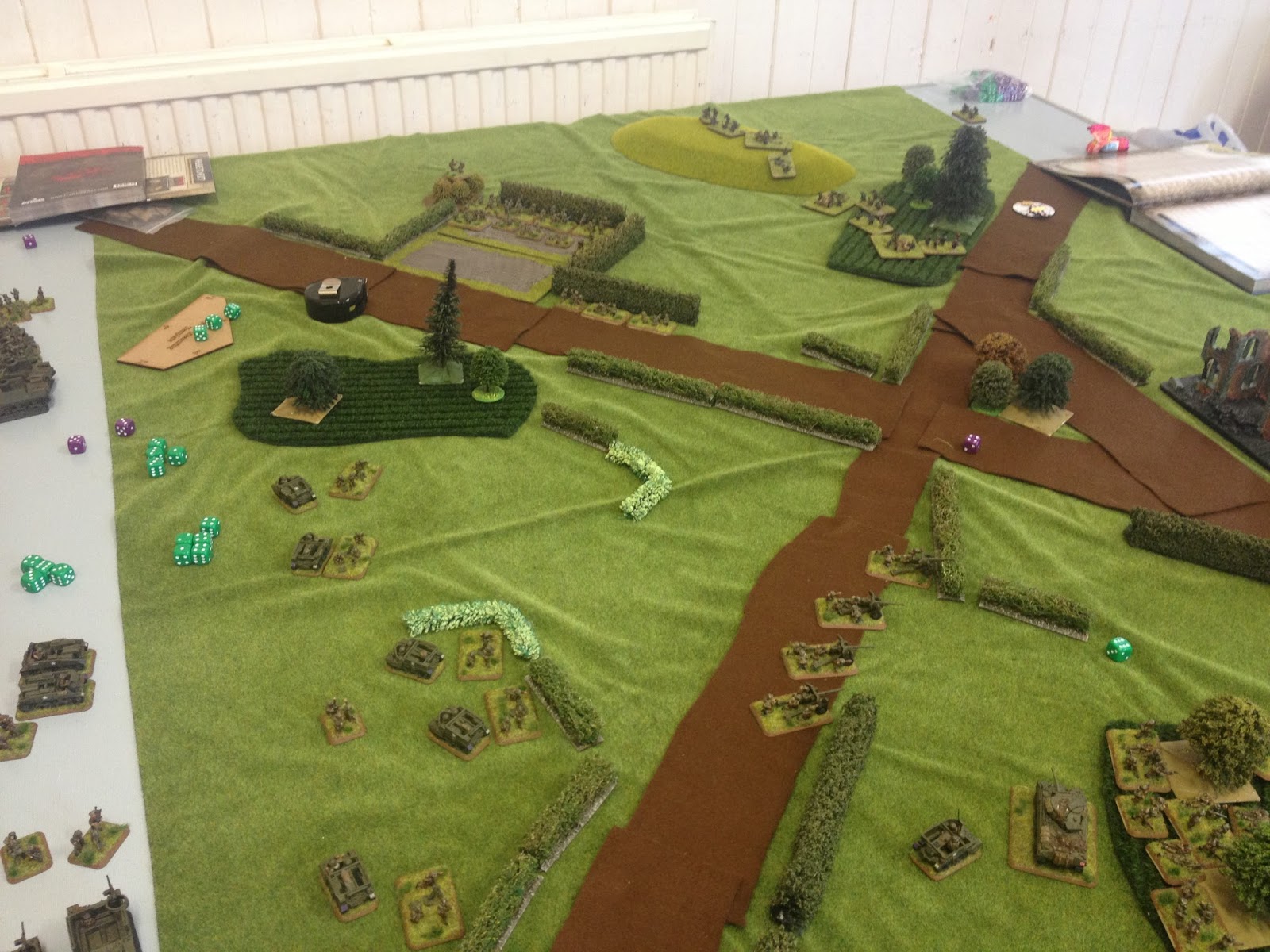 My infantry, advancing quickly towards the German held building, pushes through the smoke from burning German tanks. The German infantry outside the building succumb to Jock tenacity while another squad attempting to defend the entry to the building falls to hand grenades, bursts of Sten fire and covering fire from Brens. 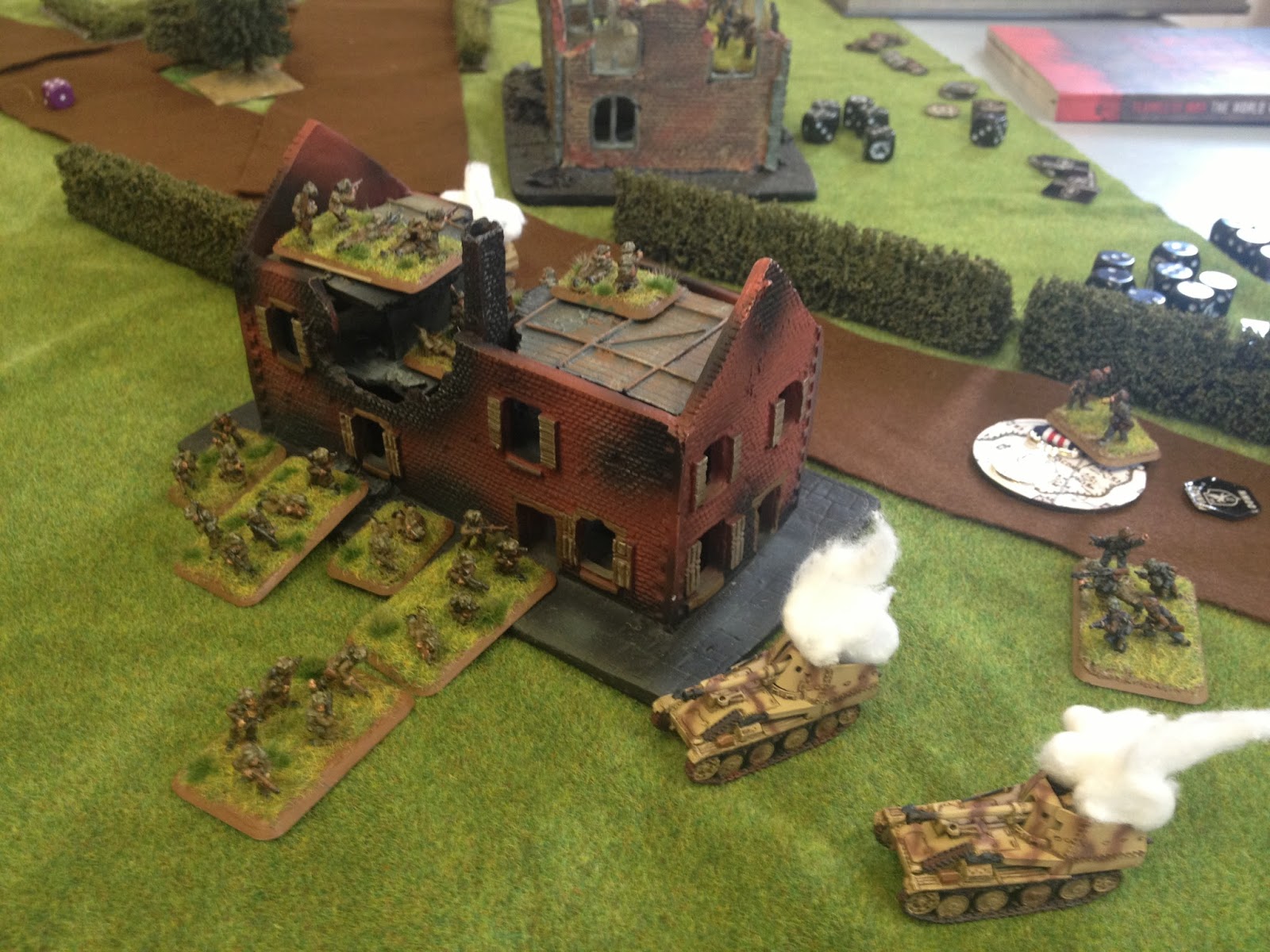 The Germans morale waivers and even these veteran Germans baulk at the swirl of pipes, refusing their commanders orders to counter attack and instead falling back in confusion. News of this victory helps the jaded (reluctant) Scots on the left flank unpin.

The German turn is brief, with some desultory fire against the infantry on the left, resulting in cries for stretcher bearers. Several squads of infantry are lifted from the table but the jocks remain unpinned. In my turn my infantry begins to attack the hillside, with the mortars and Vickers fire keeping the Germans on the hill pinned.

Under the cover of all this fire, my bocage dwelling infantry decides it's time to give the Germans a taste of steel. At this point the assault rules had us a little stumped, as the book mentions both 4" and 8" as the assault range. 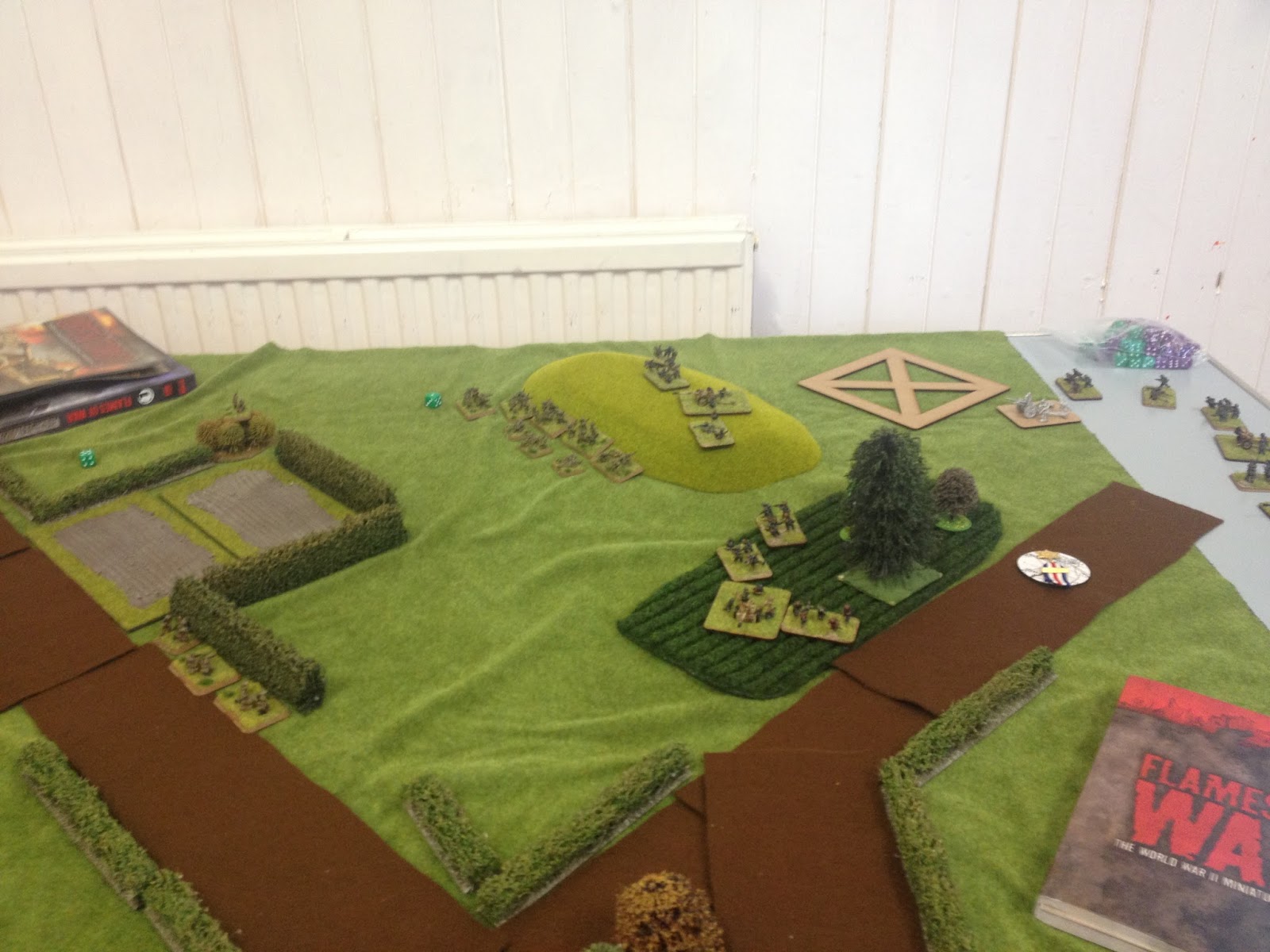 On the right, my infantry poured from the building, ready to follow up their previous assault and push the Germans off the objective. Supporting fire from the Shermans pinned the Germans as the Jocks prepared for another push... and we ended it there. 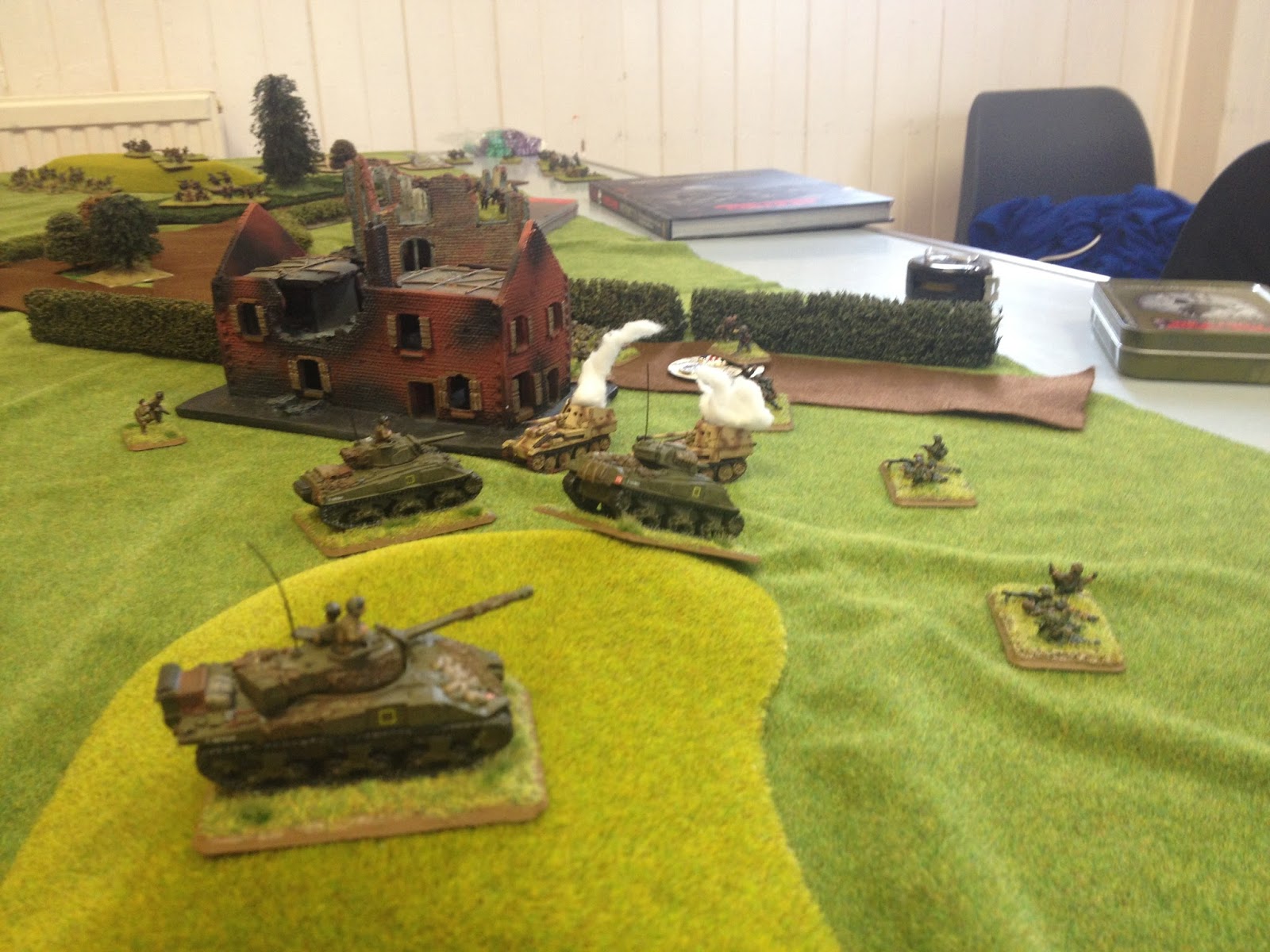 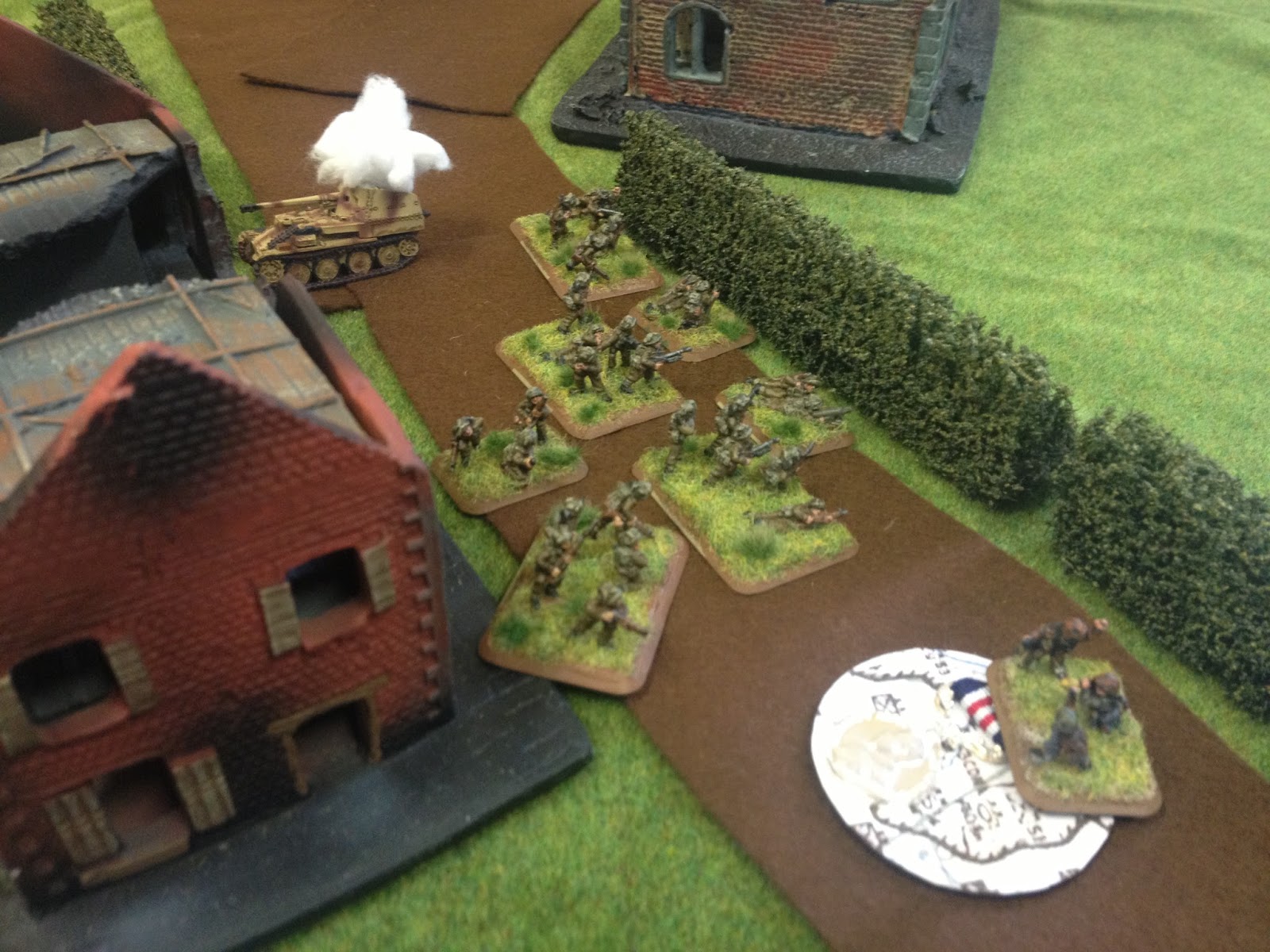 It was nearly time up, and we were a bit confused with the assault rules. As it turns out, the assault distance is 4" and once your assaulting squads are in other units in the same platoon up to 8" away can choose to move 4" closer to the fight.

There were no doubt lots of other bits and bobs we got wrong on this play through, but it ended in a draw and we both thought it played pretty smoothly. We were also glad that our battlefield looked more like what we expect from a WW2 game, rather than the taxi rank of tanks side by side we see quite a lot online. We were both using our full command distances and the table with the painted mini's looked great (even if we did just throw the terrain together quickly to have something to try the rules with).

I will admit that Davids praise of my painted Shermans got me quite emotional as the Provan clans painting skills are what has inspired me to really focus on this aspect of the hobby.

All in all, a great first game and great company!

Oh, and we decided it was a draw!