This Saturday I managed to get down to the Wargames Club in Law for the day (the first time in a lot of months). Unfortunately (for me) in July my son and his mother moved up north (a good move for him, and I am happy about that). This has left me with my weekends empty, as for the last 4 years I have had him staying most weekends.

I got a lift down to Law from 'Young' David, and he had mentioned there was going to be a Rapid Fire game I could join. Rapid fire isn't a game I have been keen on, based on playing it previously in 20mm. I wasn't very happy with the way firing was resolved, especially the way tank armour was the same from any angle other than the rear (not something very helpful when you play Allies vs the German Big Cats). Still, it was a WW2 wargame, and neither me nor David have our Flames of War stuff organized at the moment.

The guys had laid out a nice looking table (about 4" by 12" I think). The German forces were very sensibly picked without a big cat in sight - although as we were attacking the guys decided to play the German forces in deployment using 'blinds' and including dummy blinds. Something that worked really well and forced us as attackers to be much more careful and make use of our recon assets.

Here's a pic of the table and the allied objectives and attack routes. 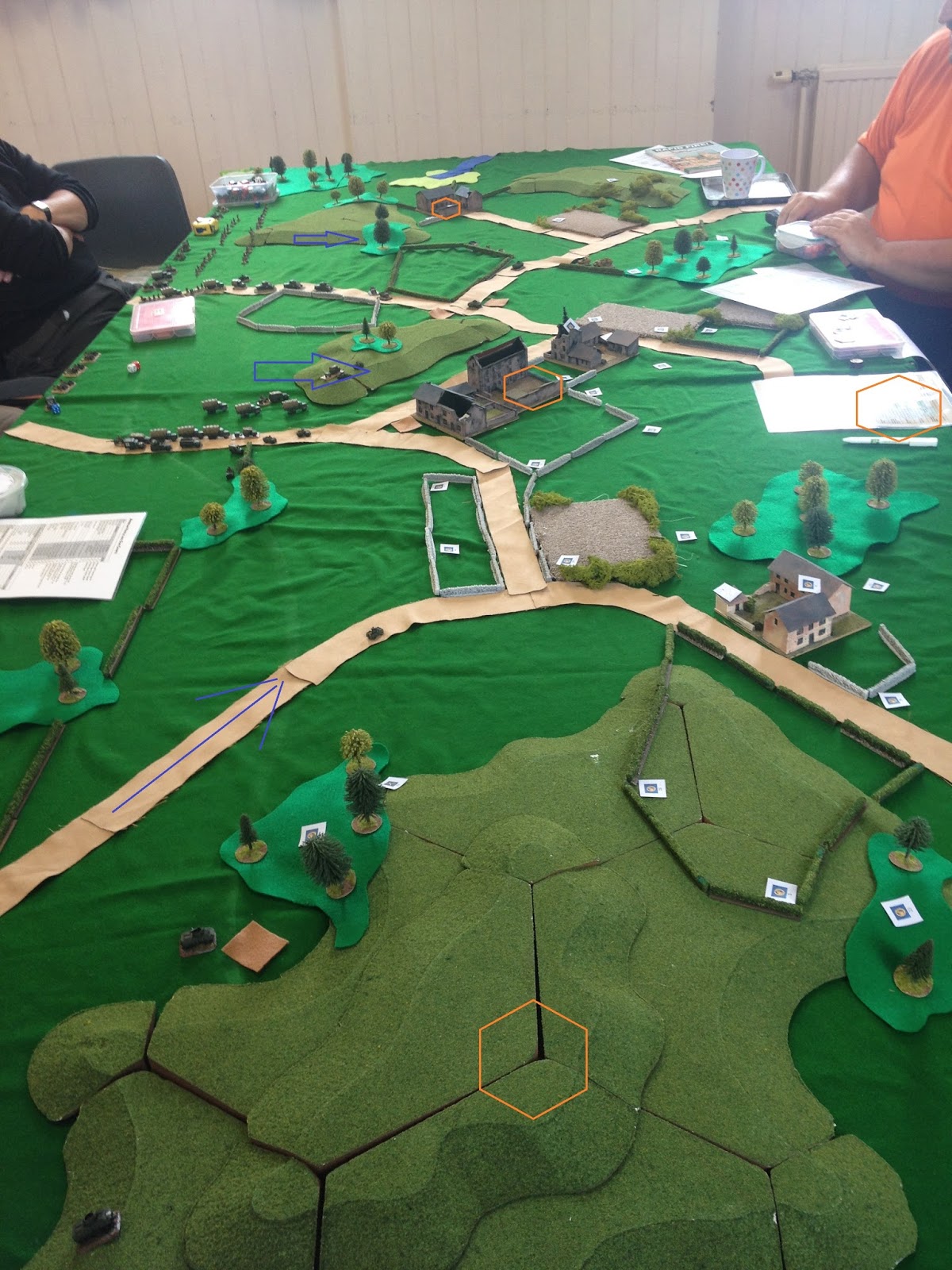 The US objectives are marked by the orange hexagons on the map - namely the farm complex at the top, village in the middle, hilltop at the bottom and exit road on the right centre.

Myself and David took a bit longer to get into the fight due to the length of the road and out diagonal advance. 'Our' aka 'my' plan was to advance up the road, through the corn field in the centre and cut behind the village to secure the road - also hopefully helping the dismounted infantry attacking the village from the front.

Thats more or less all the pictures I took - we made good progress, especially me and David. There would have been a bit of a scrappy duel between our Shermans and the Hornisse and StuG's in the south. The infantry fight in the north would have been scrappy and in the centre the infantry was suffering under artillery fire. Myself and David had secured the hill top, which was the only Allied objective secured before we ran out of time. I'm pretty sure my infantry and half tracks would have made it to the wheat field as well.

Lessons learnt were that the allies should have started deployed further onto the board, that the Blinds and Decoys really made it into a interesting tactical game and that I enjoy Rapid Fire more in 10mm than in 20mm.

Note sure that I will be collecting any more armies just yet though!