Another visit to the club this Saturday and a large game of Johnny Reb in 15mm. There were 7 of us playing (with a quick visit from 2 others) with the southern forces attacking and the northerners defending. The game ended with what could be described as a draw - with the northerners holding the farm and my southern regiments about to take the hill top. 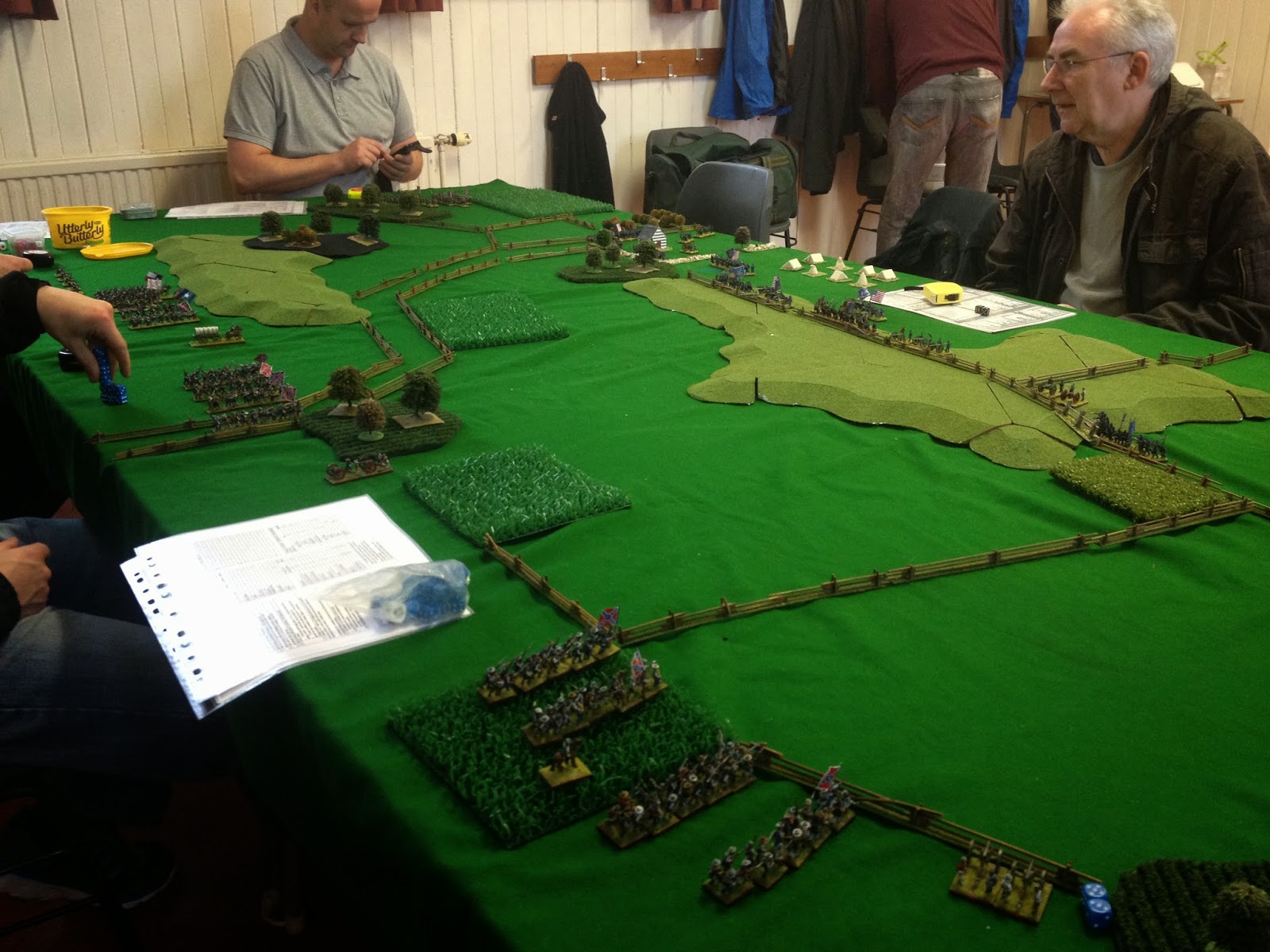 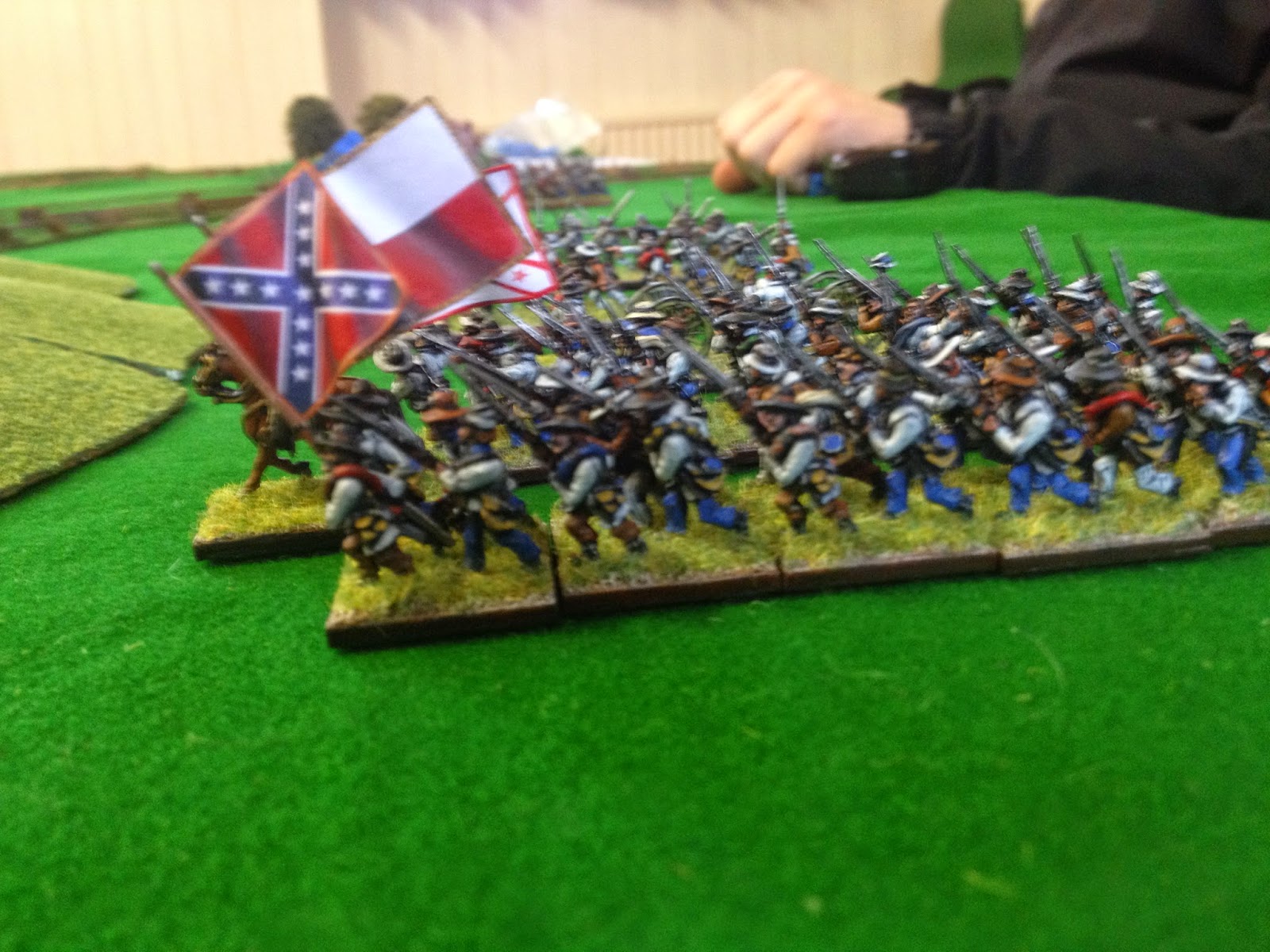 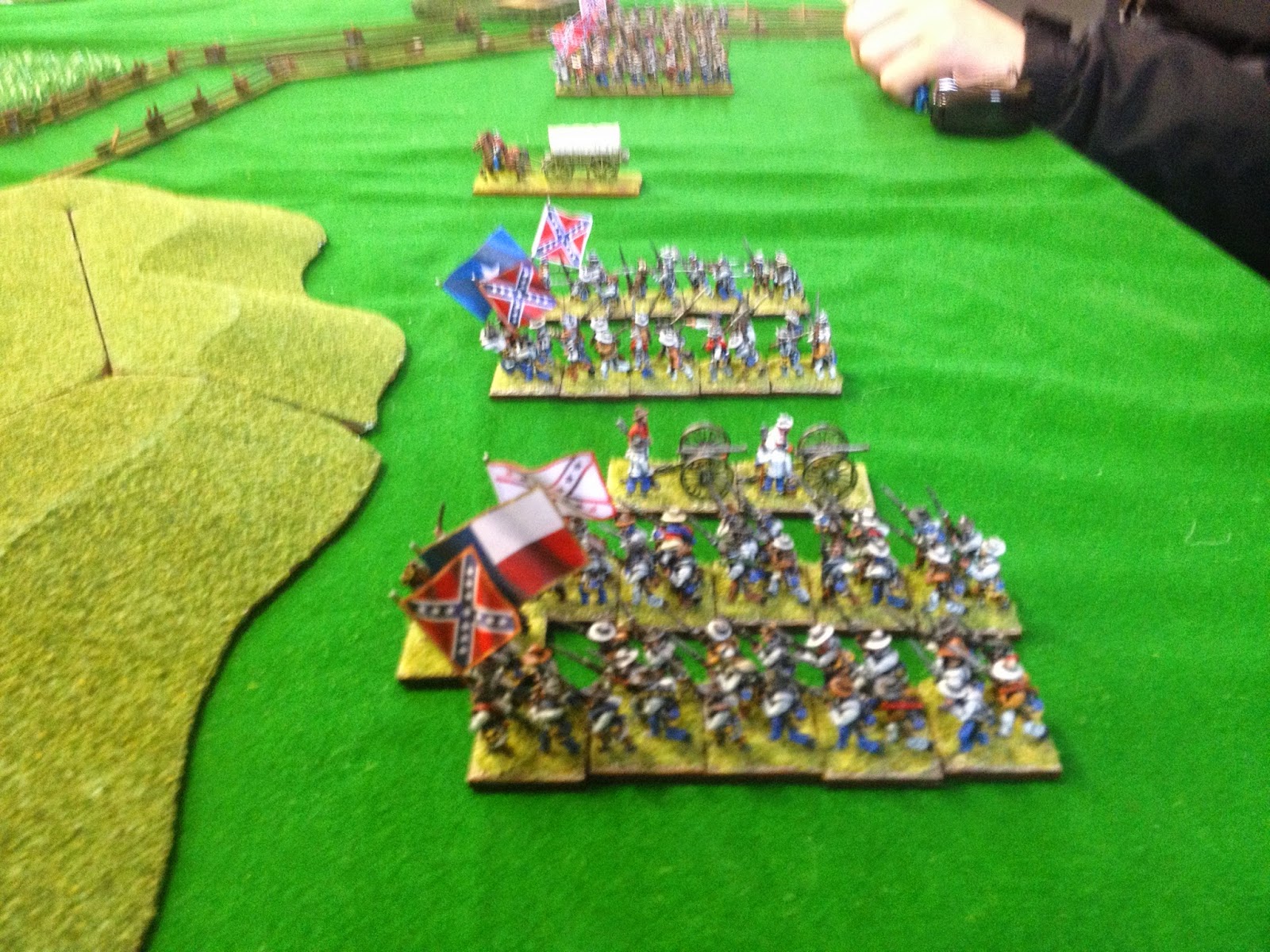 Our forces on the far left got held up by some superhuman sharpshooters (far too over rated unit compared to everything else in the rules set), while me and YD were attacking up a hill onto forces defending a ridge line. 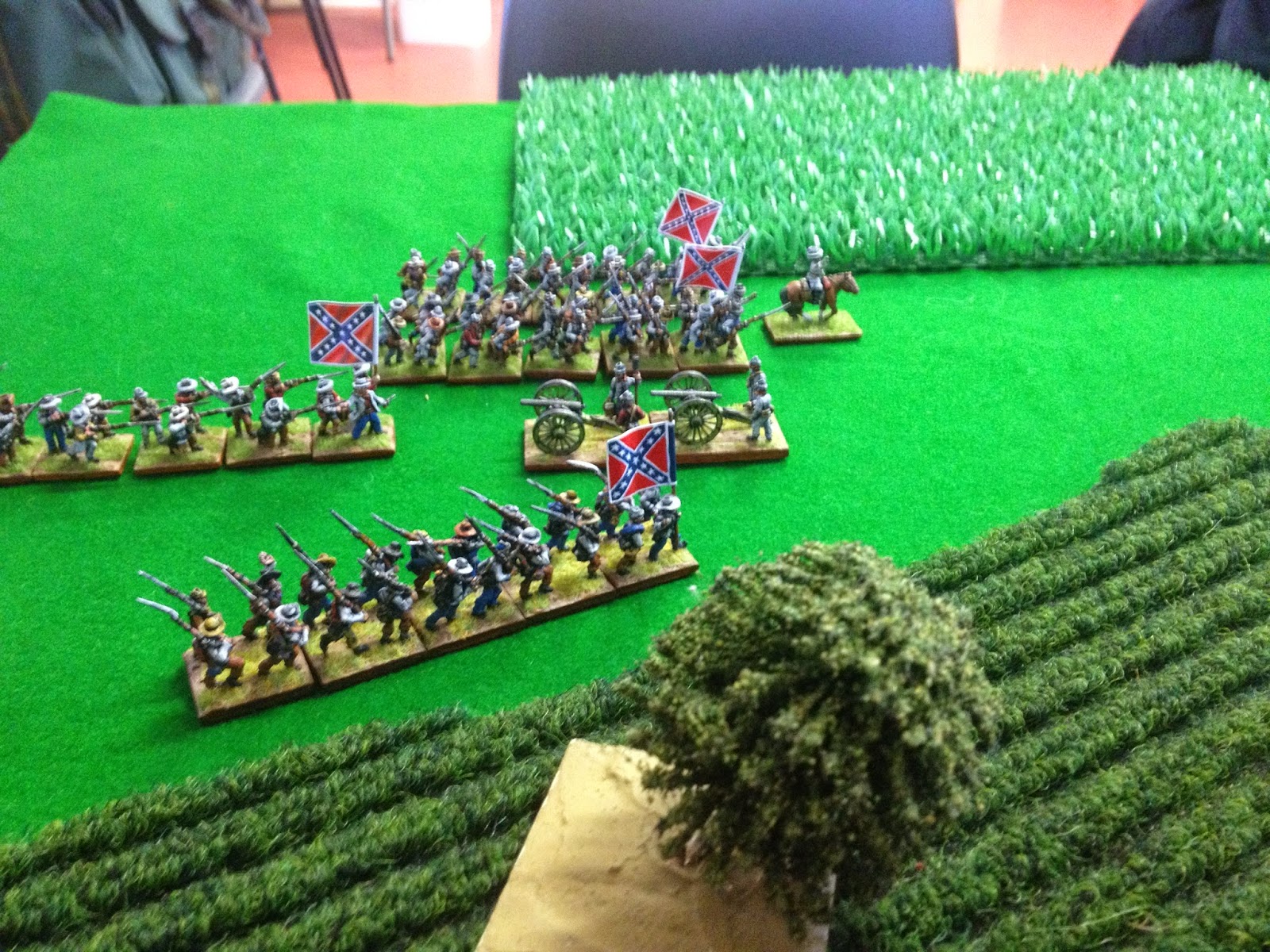 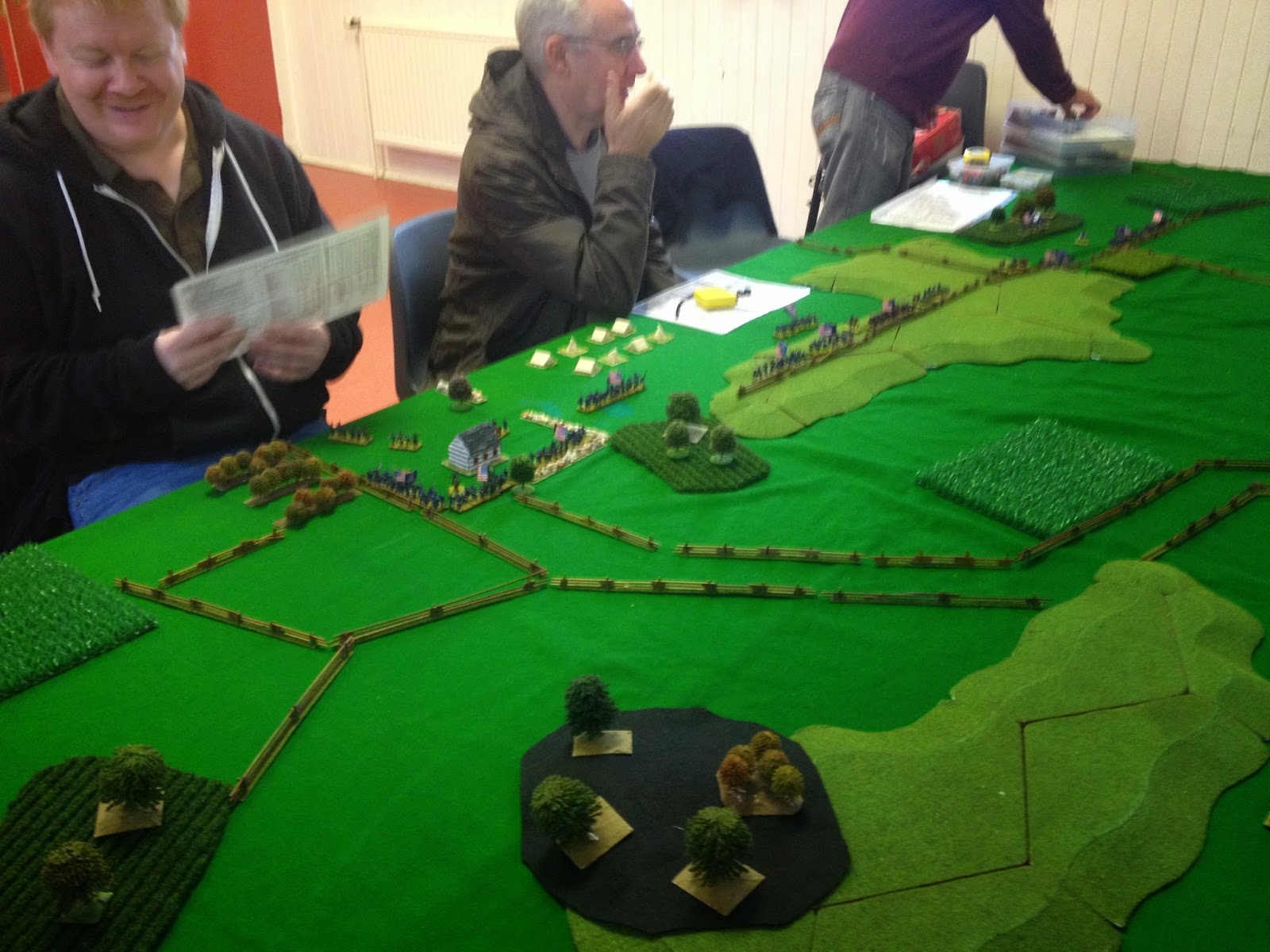 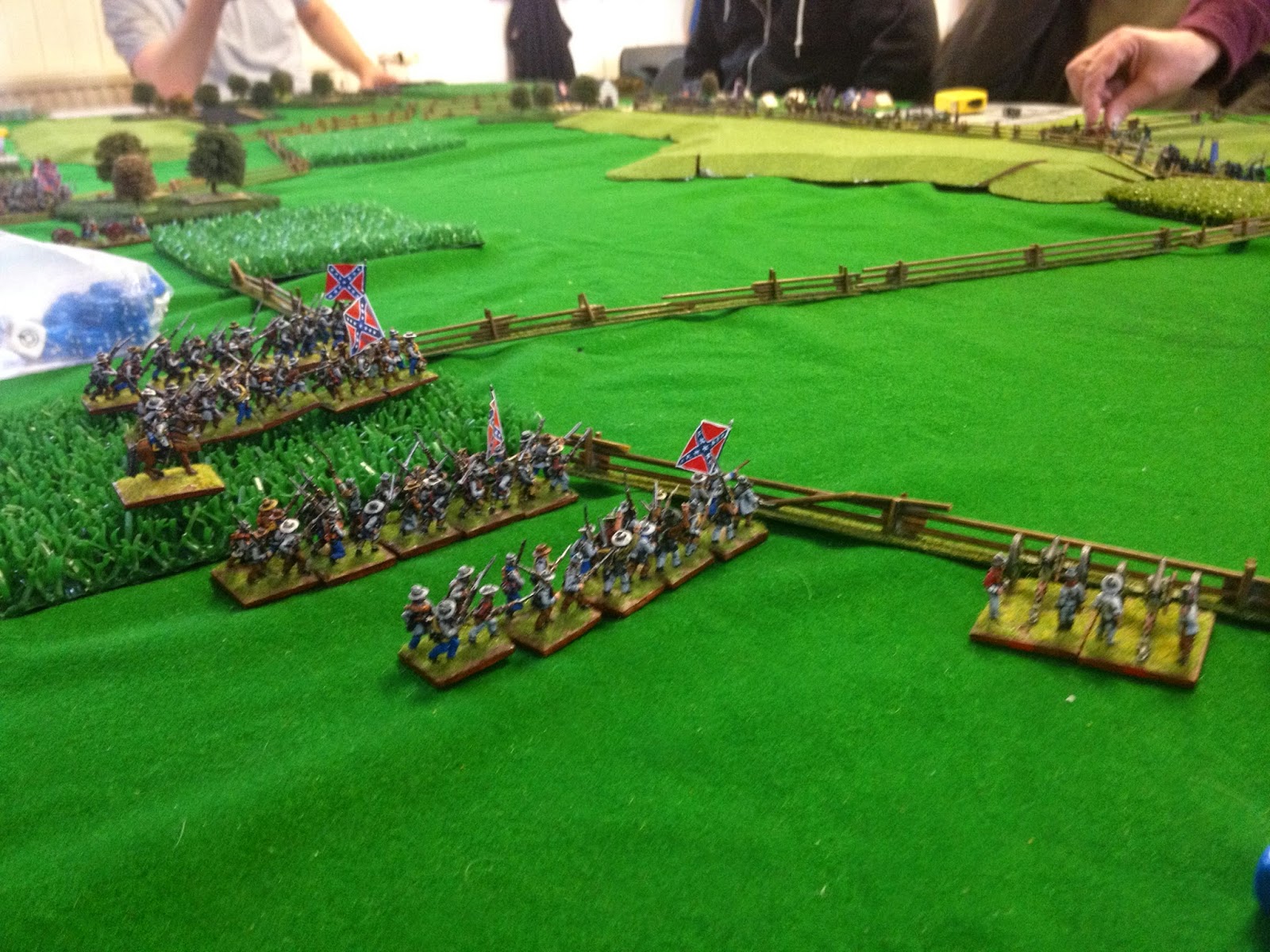 The last two photos above were my forces before and after I revised my deployment. One of the nice things about these games have been that they take me out of my comfort zone. I'm normally much more inclined to defend than attack, and looking at the defenses I was pretty sure we were onto a hiding. Luckily, on the first turn YD's artillery hit one of the central defending units on the ridge line (zoaves?). They failed their first morale check and ran off the hill, taking one of the other units beside them with them. Me and YD aimed for the hole and went forward. 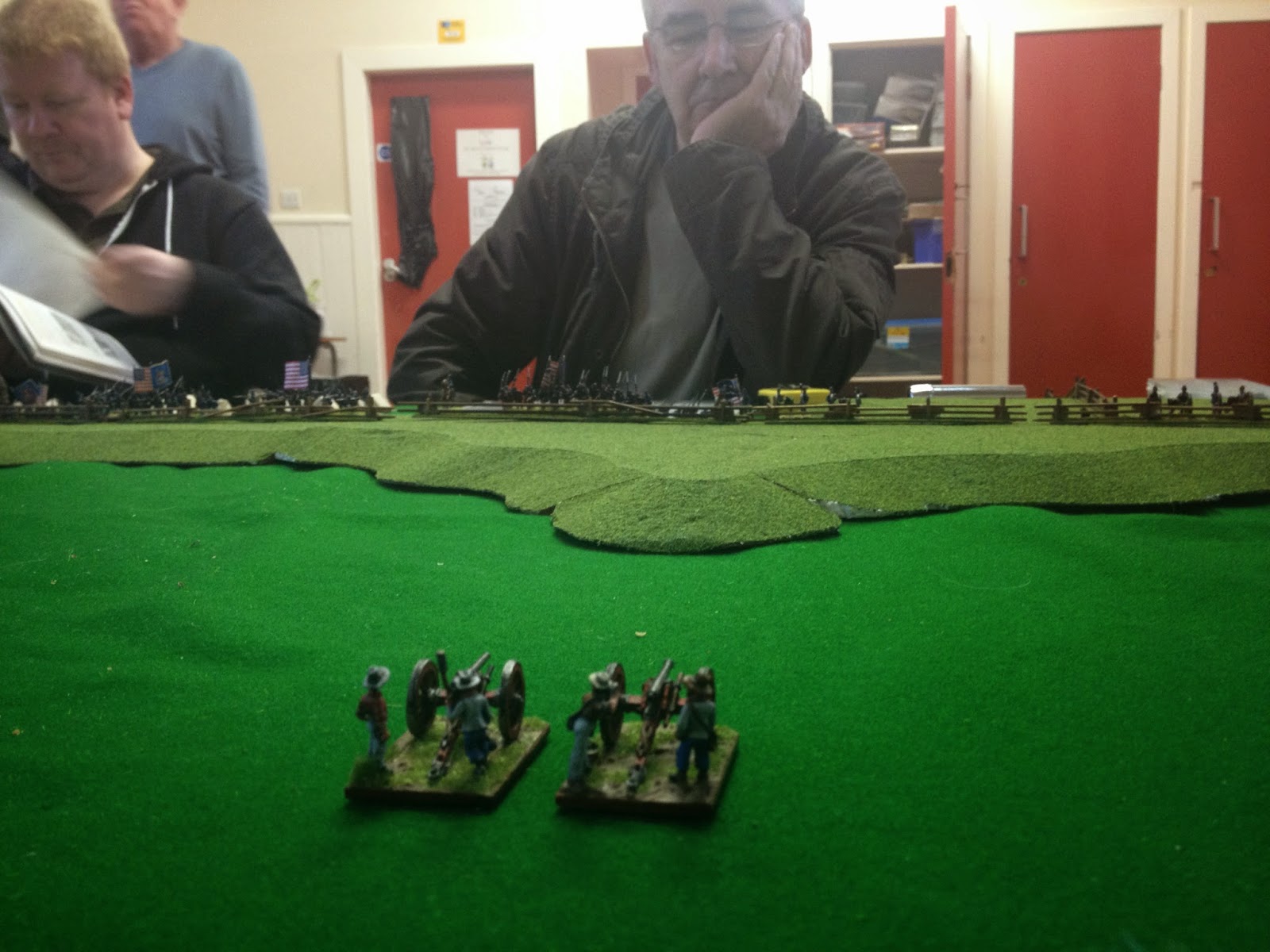 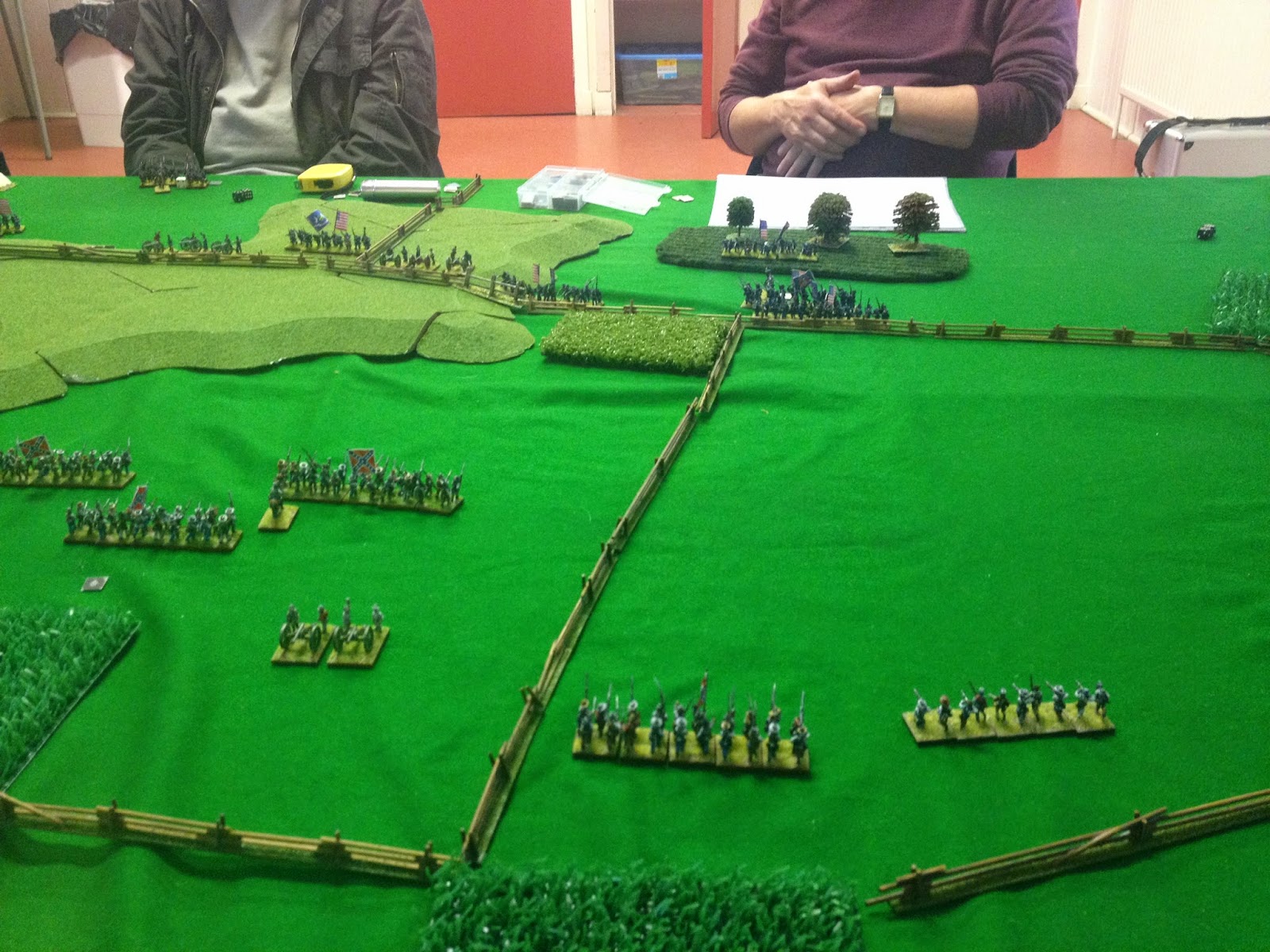 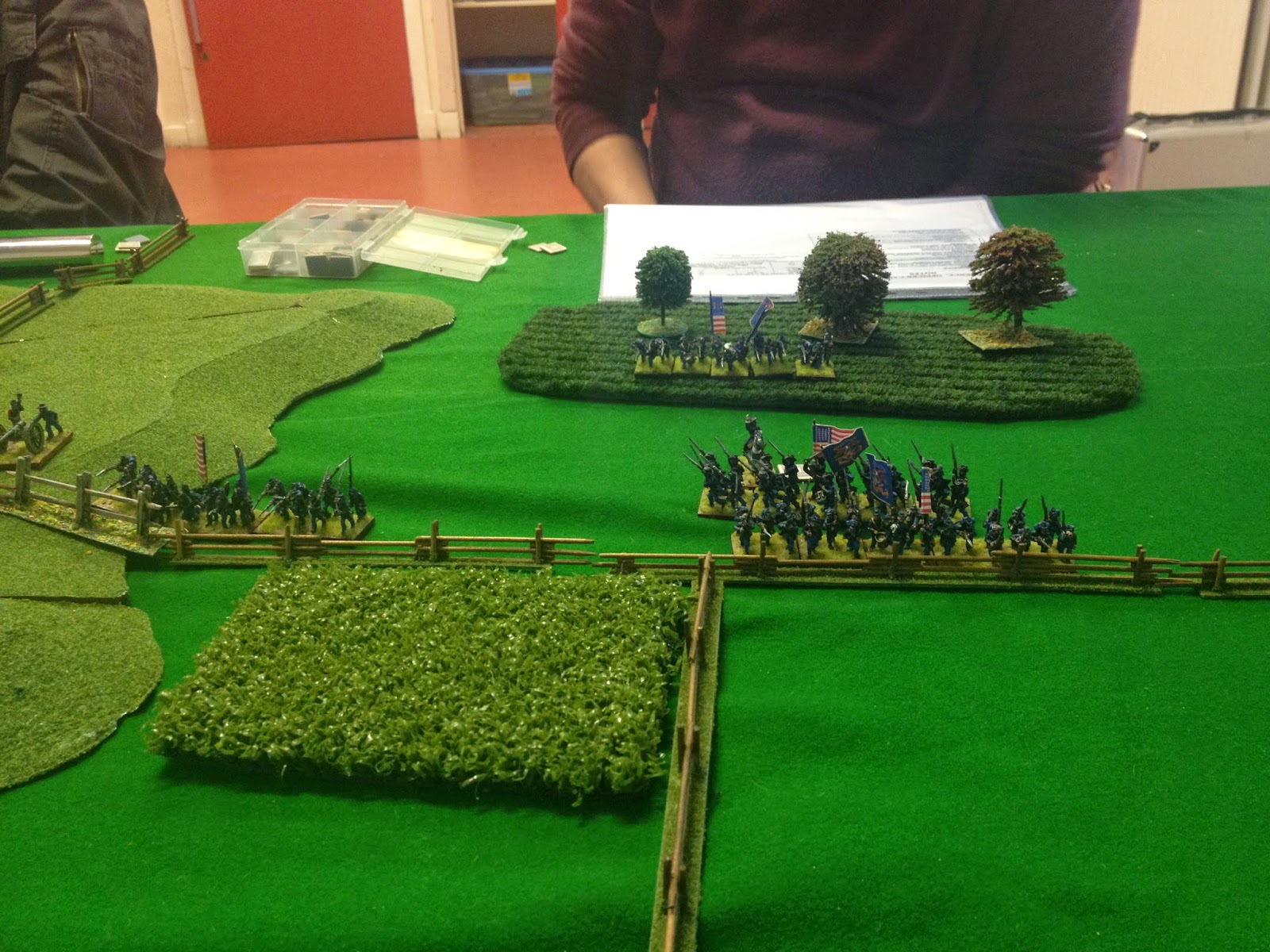 Meanwhile our left was still bogged down by some of these superhuman sharpshooters (ignore cover, save better than space marines, move in any direction, etc, etc). 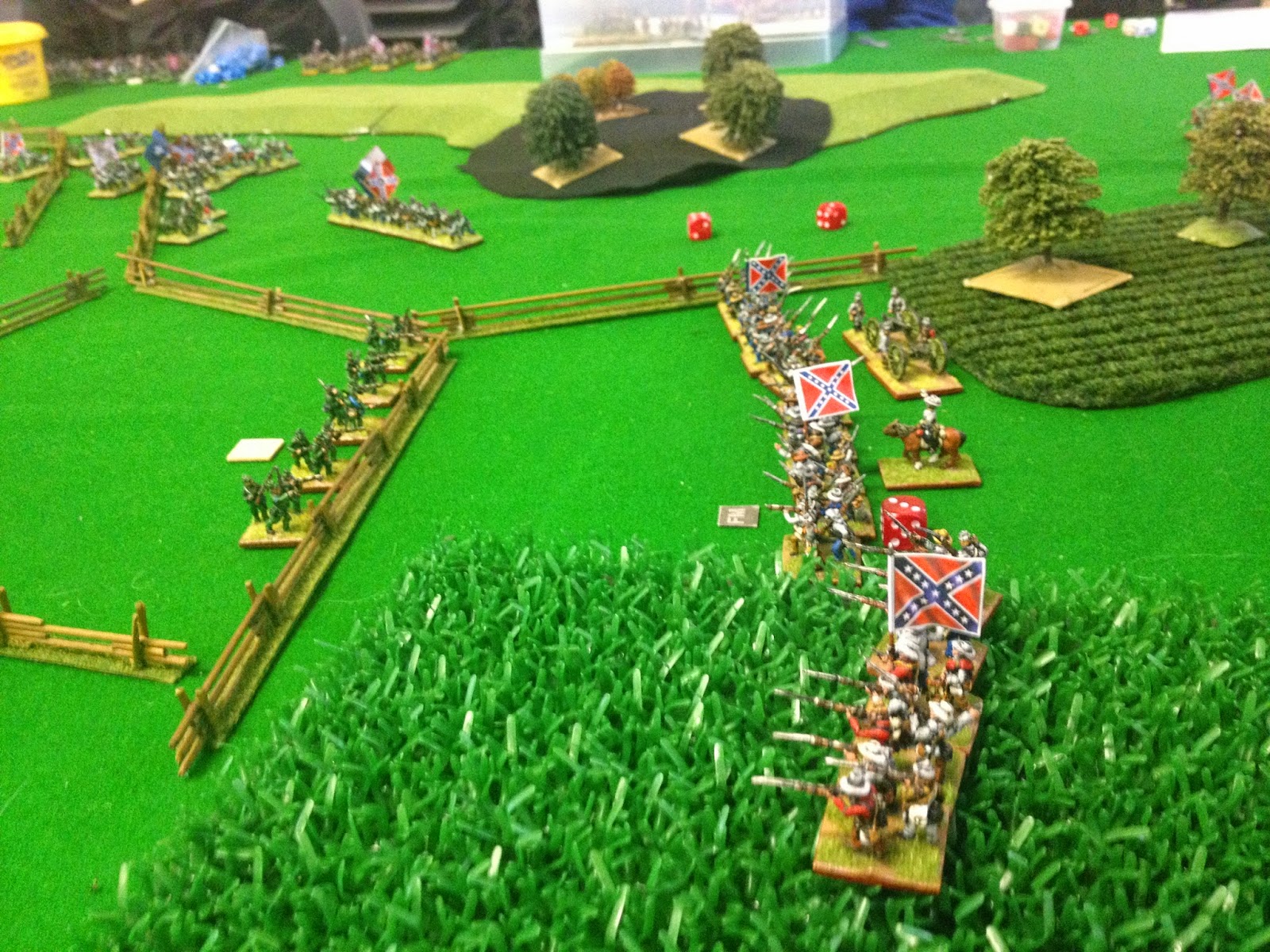 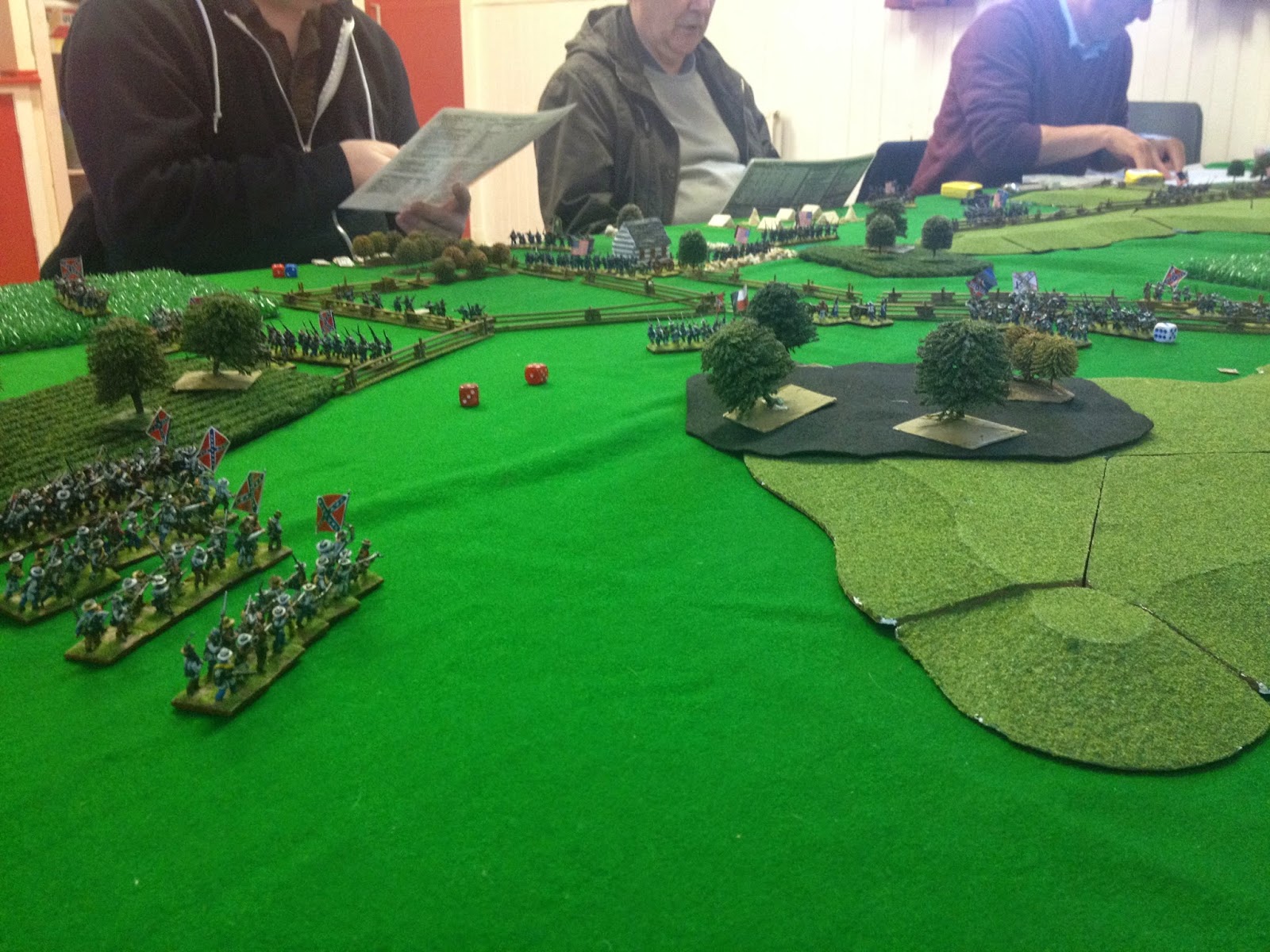 As me and YD went forward, the union troops began to rally and redeploy to cover the hole in their line. I decided to put pressure on and shield YD's brigades from the right as they went forward. I was aided by John rolling lots of double 1's in shooting and Dave beside him concentrating too much on YD and ignoring what my units were doing. 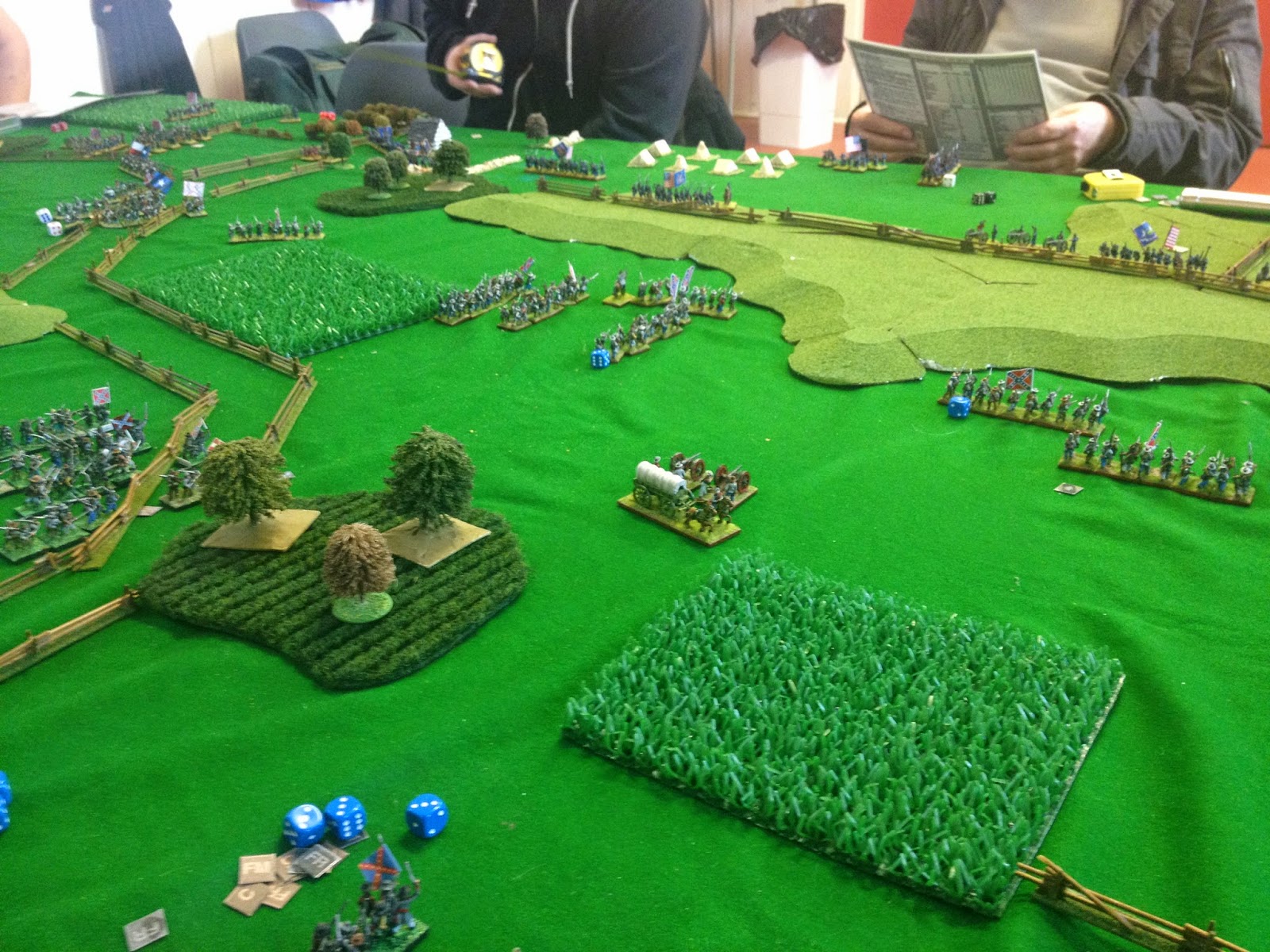 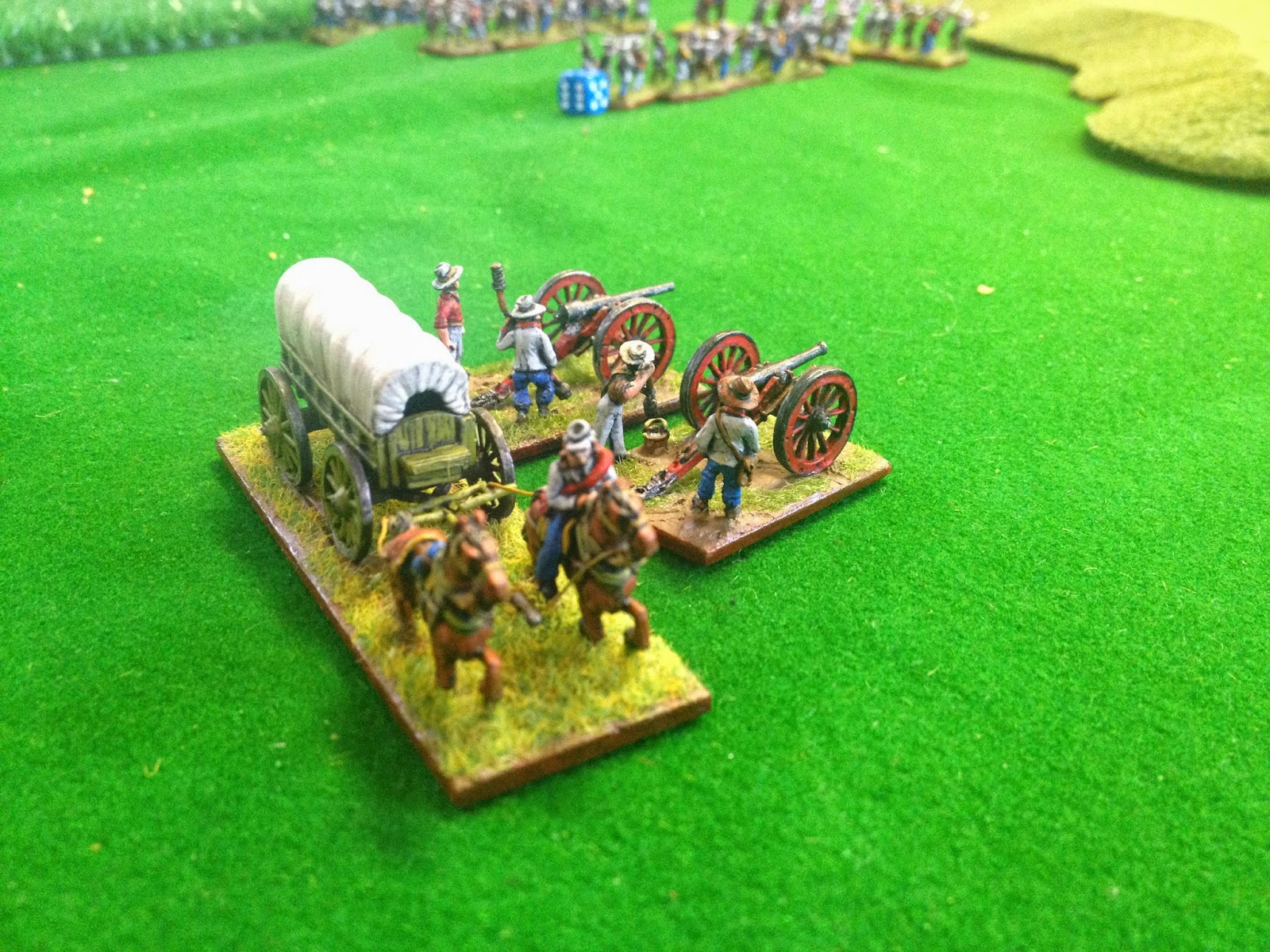 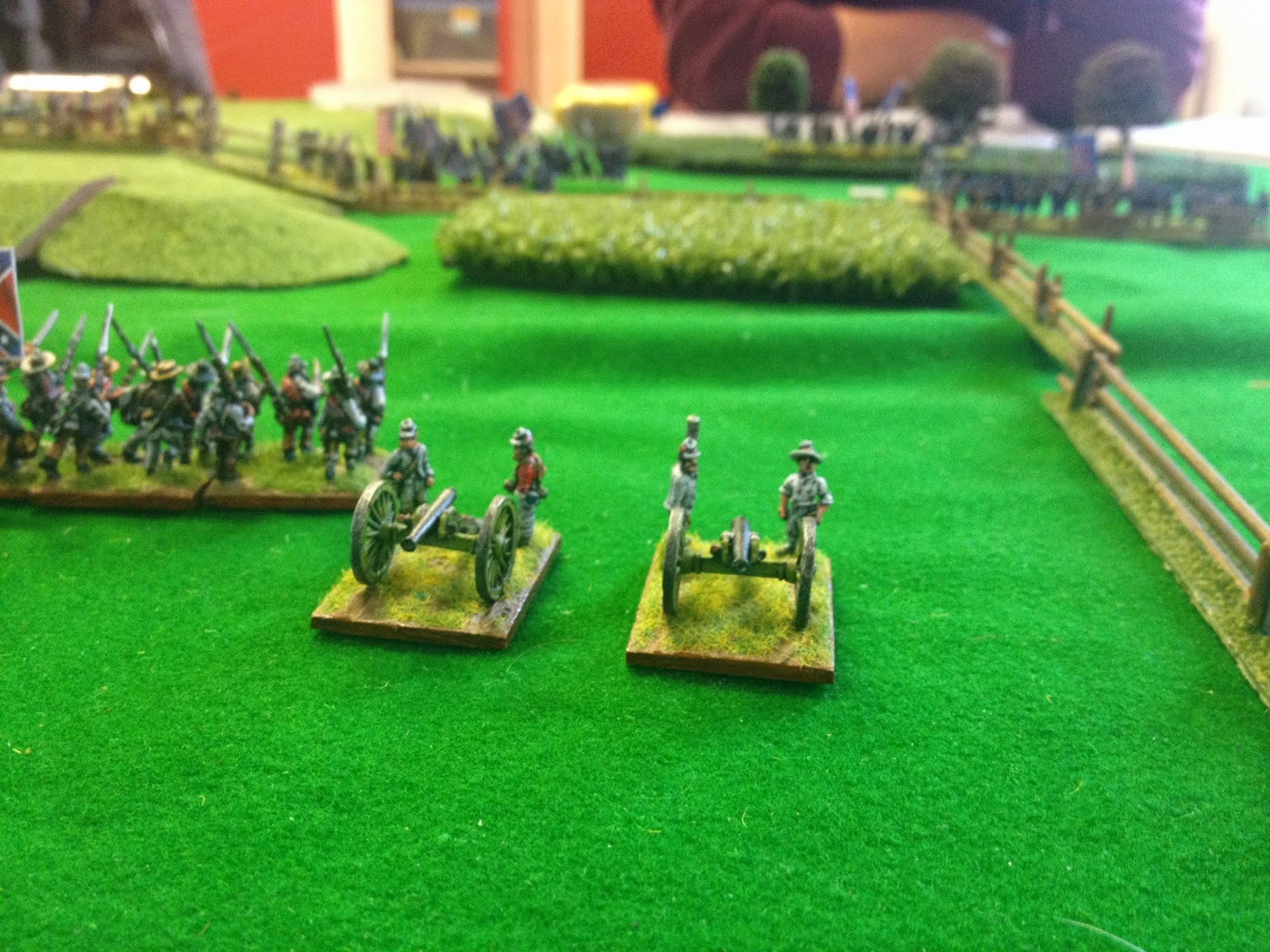 As the game progressed, more southern brigades arrived to back up the assault. 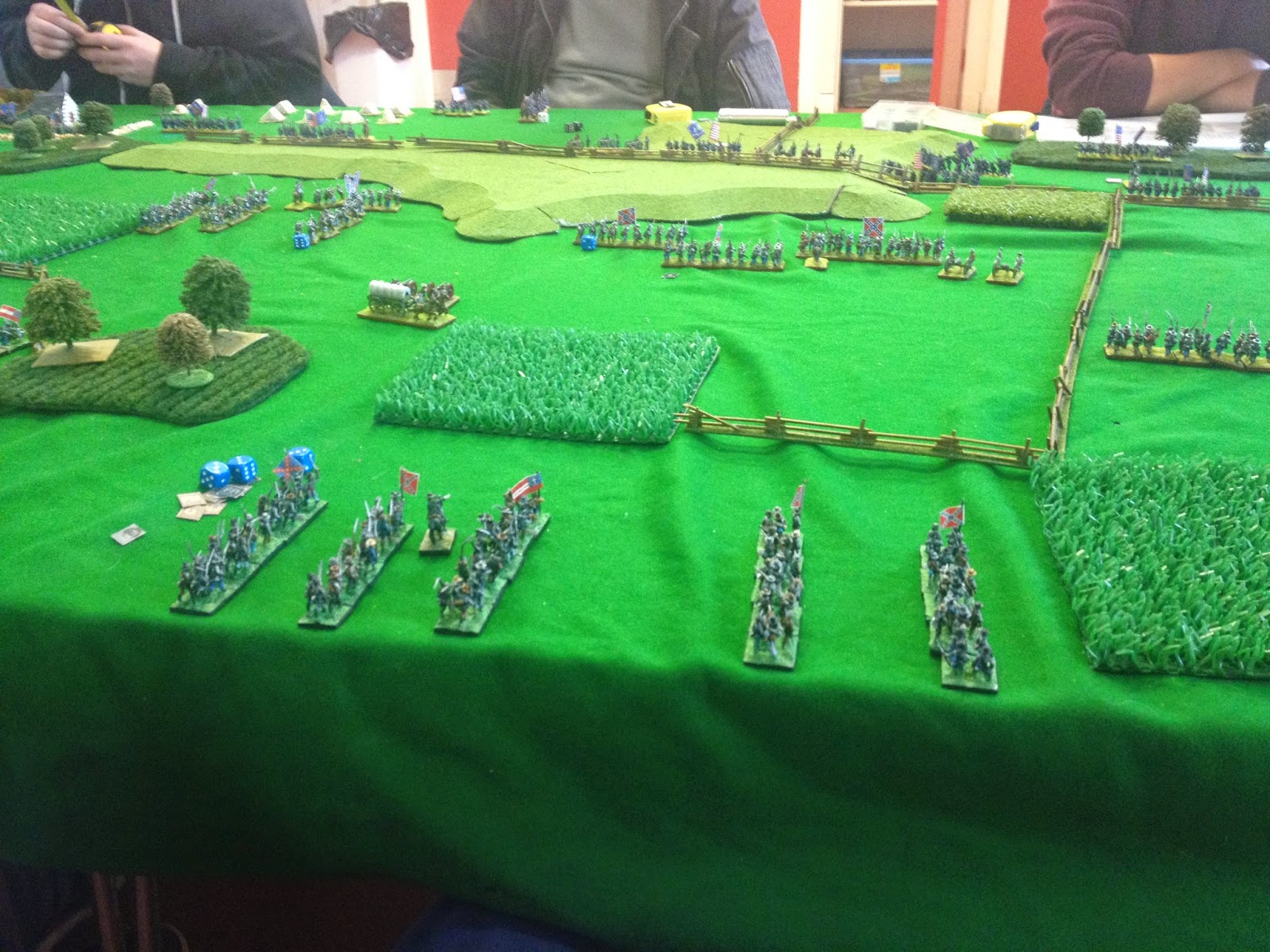 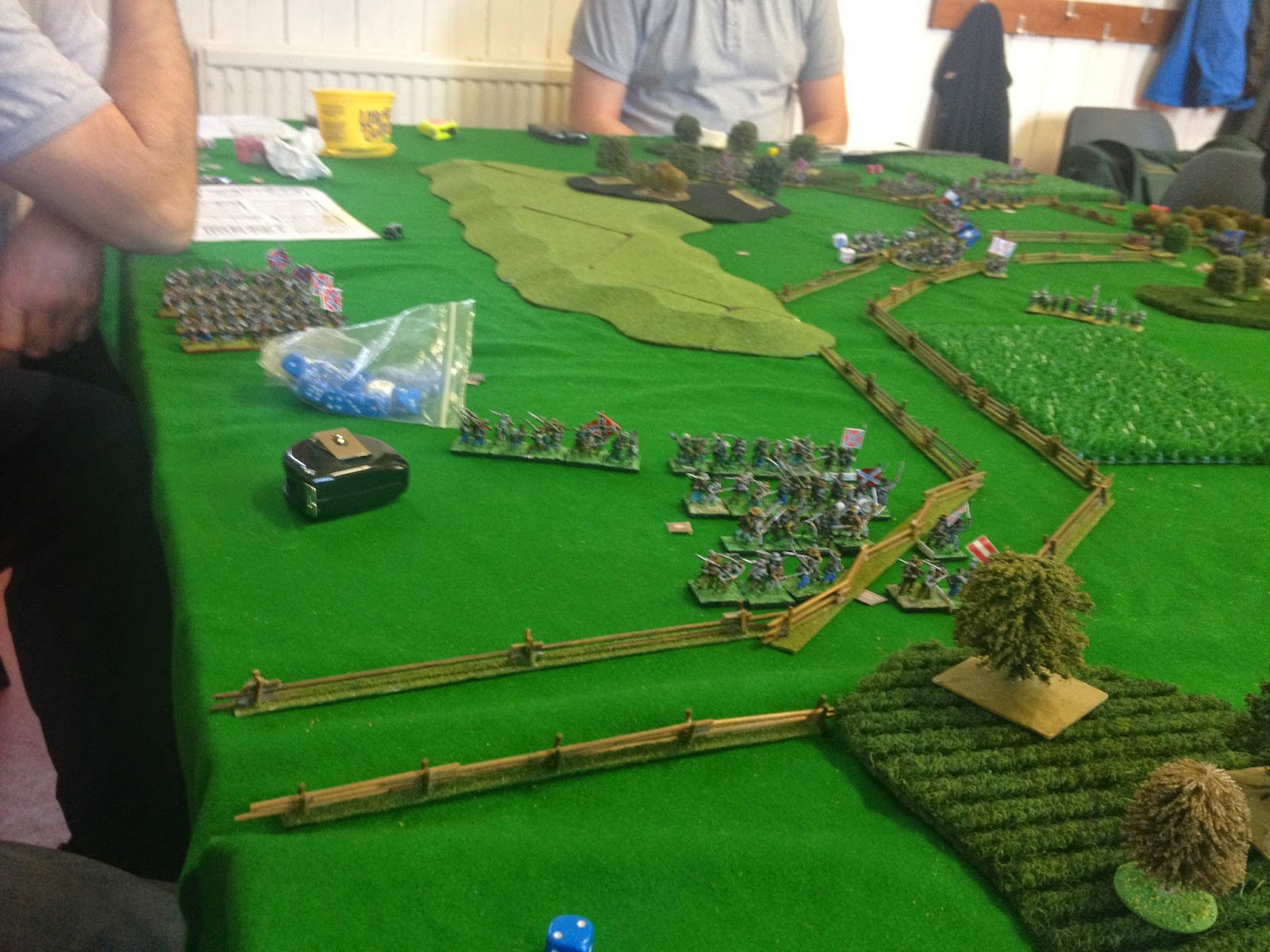 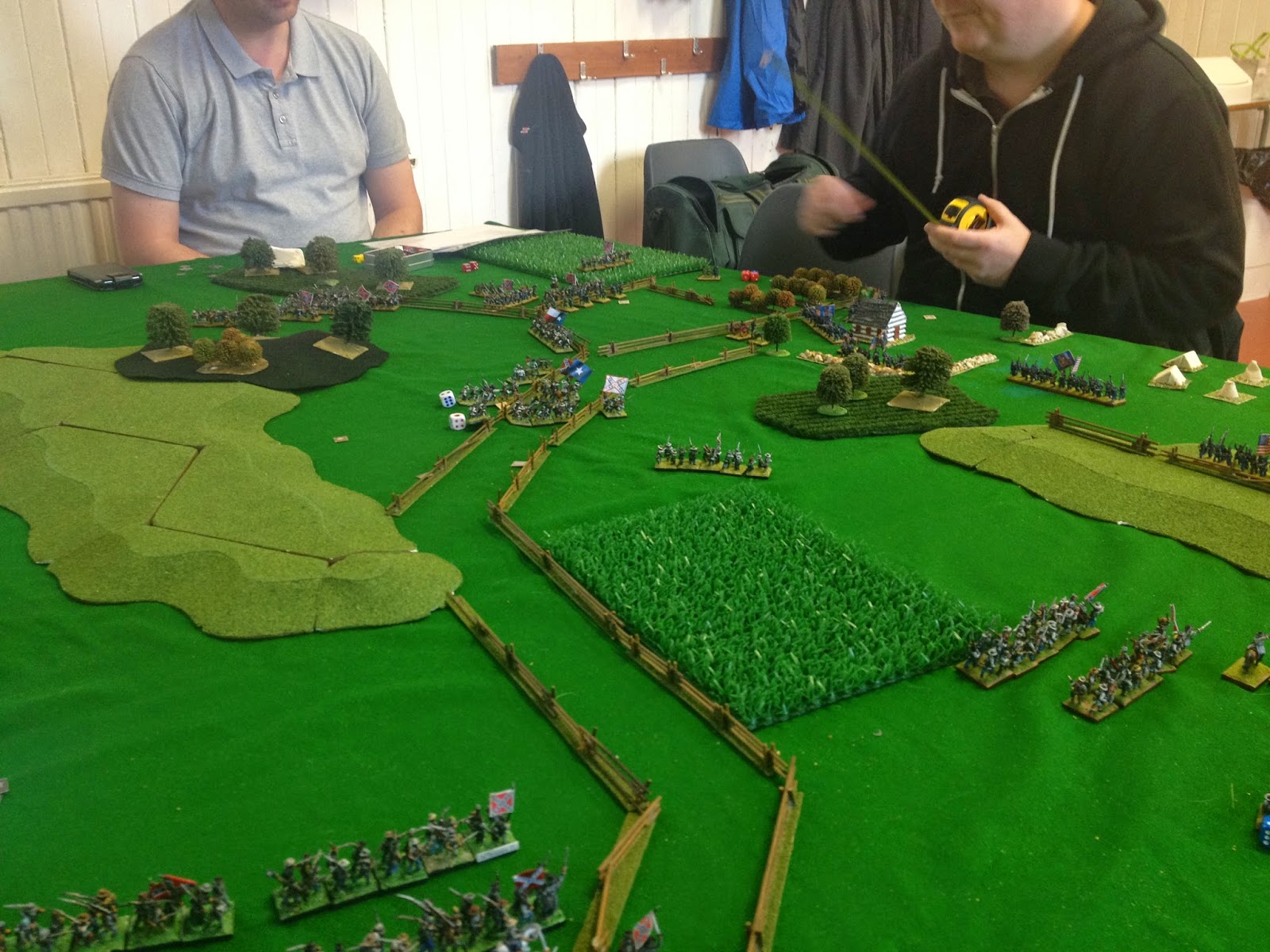 My forces closing in and pinning down Johns units. One of our objectives was the T junction of fences on the hill top. My leading regiments were taking a pounding. One was broken and ran off, the other staggered and needed to be disengaged to stop me losing it. 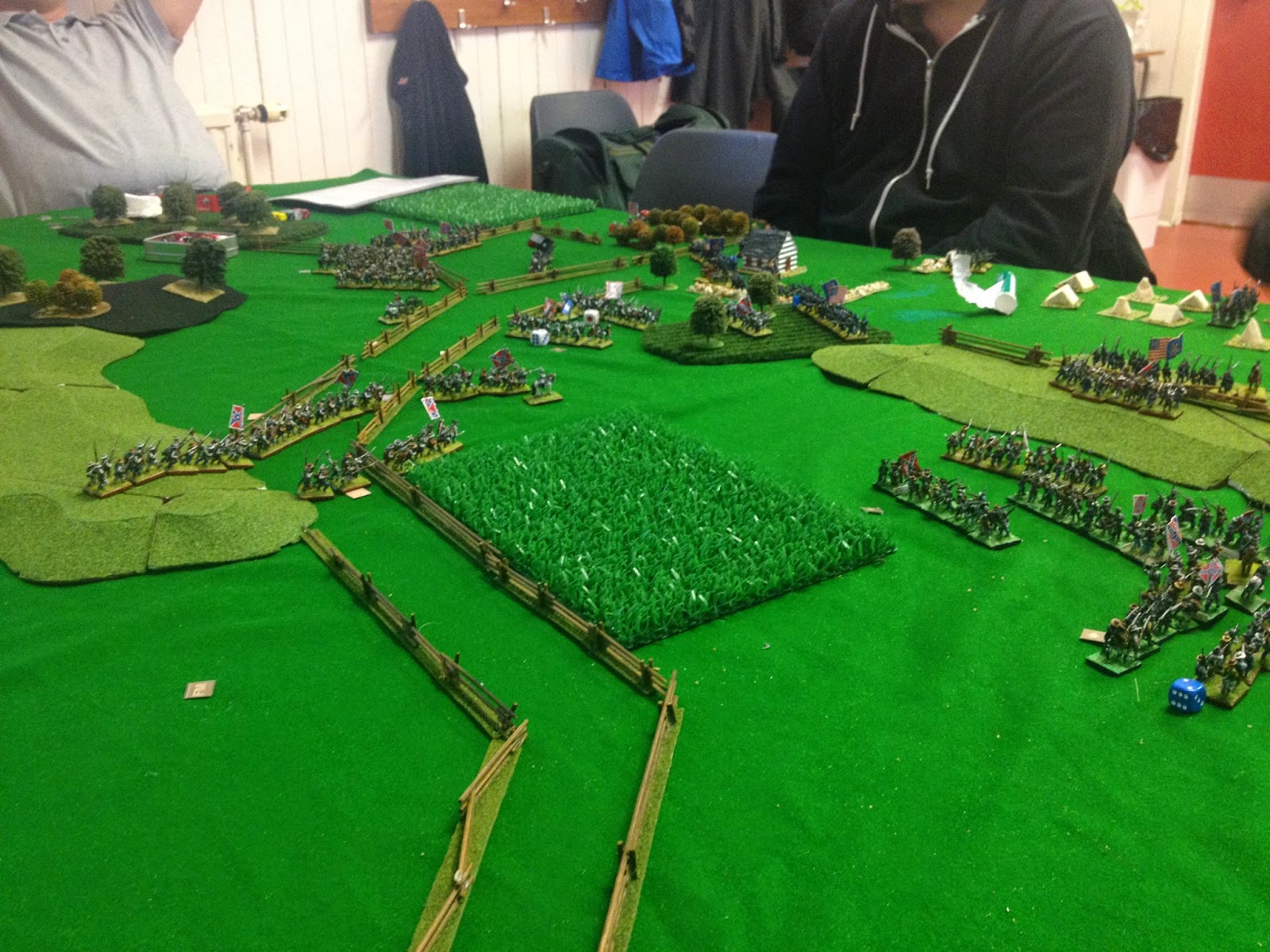 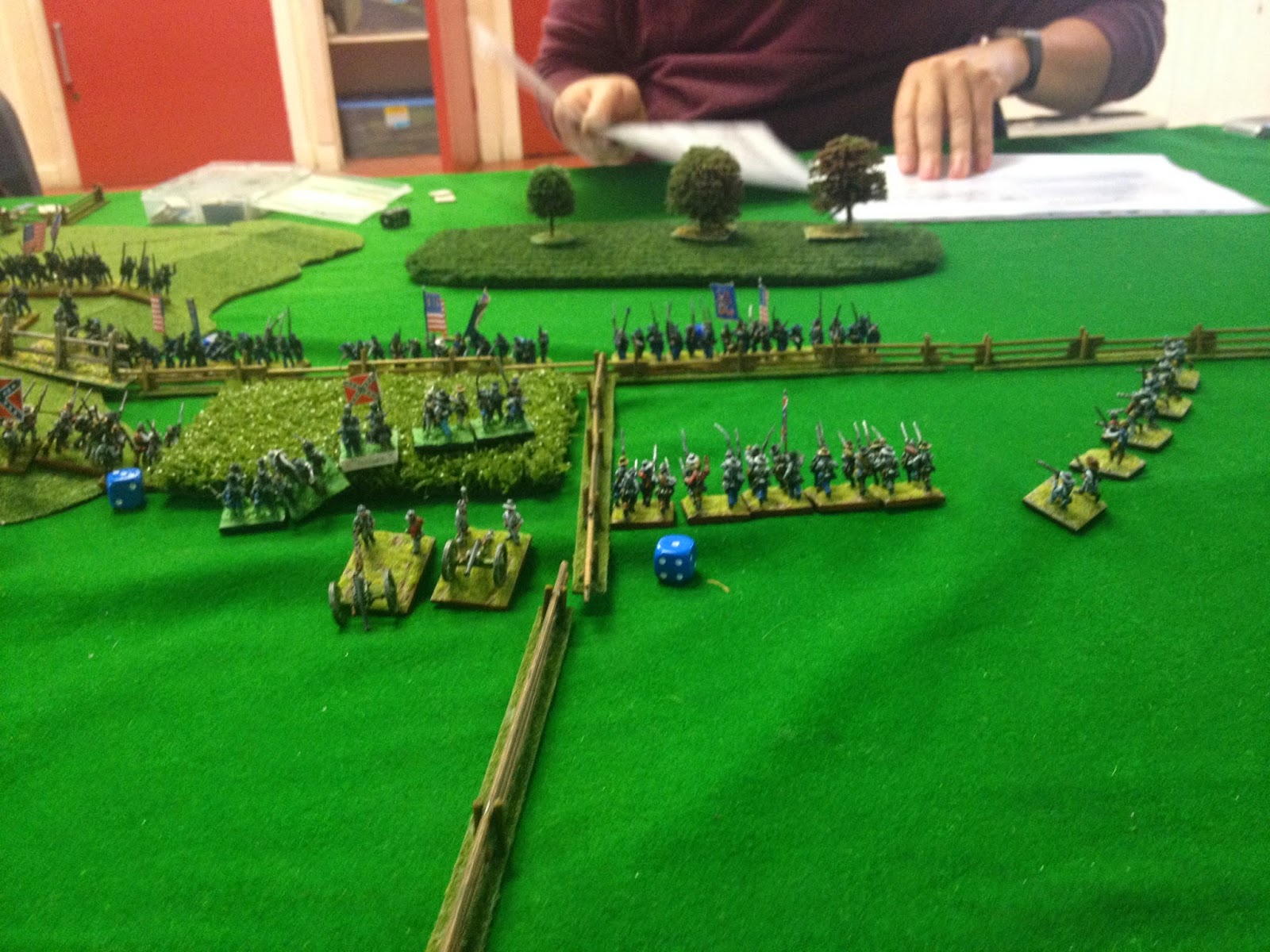 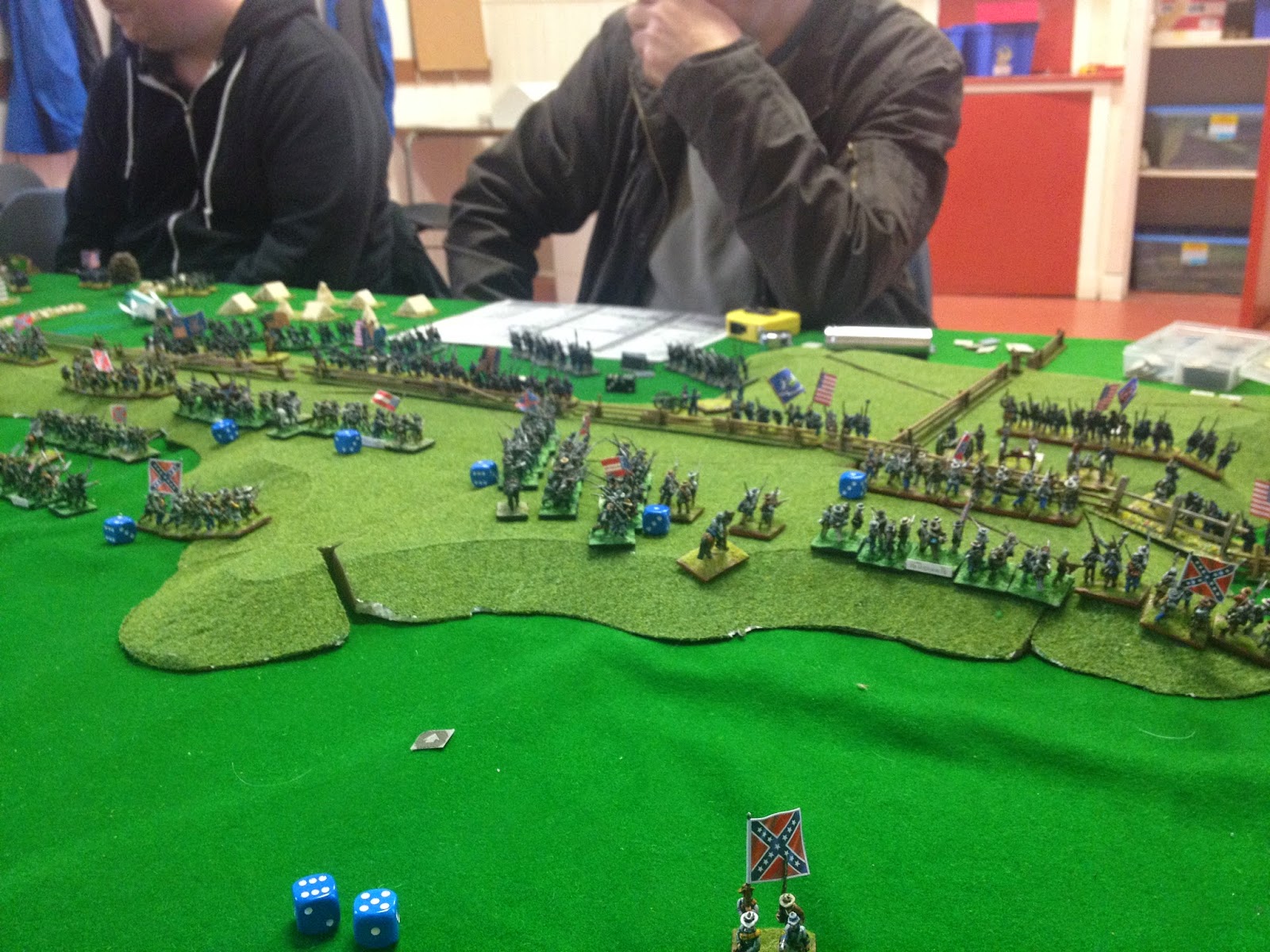 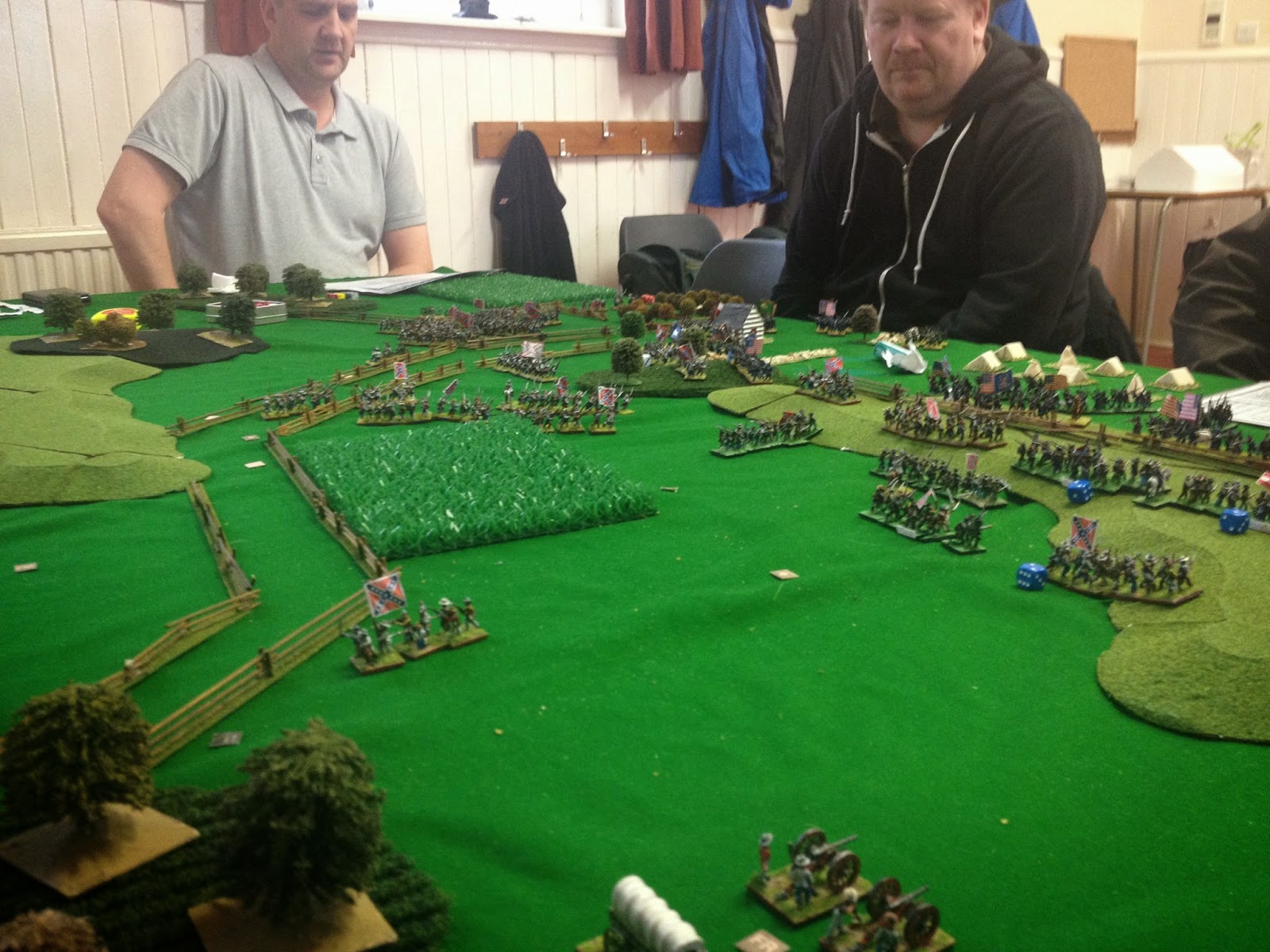 A little experiment with a panoramic shot.

A good game, we did much better on the attack than I thought we would. It was good to push myself in a situation I wasn't comfortable with, and it's good to learn to fight that urge to 'just f*ck it' and charge. YD seemed to have the same idea and we slogged it out in the firefights and gradually pushed hard in the centre. By the final turn I had a charge lined up on the T junction, but time ran out. A good laugh with some great banter, and an example of how the club can support big games for people that don't know the rules (like me and auld davey... =D ).