Lots of blogging this week!

On Saturday night (and into the early hours of Sunday) I was feverishly working to try and finish off an entry into the Analogue Hobbies Painting Challenge bonus round for Sunday. This bonus round theme was 'west', so having thought a bit about how West connects to what I'm working on, I established a few big connections.

Firstly, my FoW stuff is for the western front. Secondly, the trucks I have been working on are of Canadian manufacture - which led me to consider Canada's contribution to the war effort. Thirdly, Canada was one of Britain's most important allies - a western (geographically and politically) ally no less! The Canadian connection also works on another level for my collection, as my Highlanders were under the command of 2nd Canadian Corps during Operation Totalize.

Given all of this, I quickly established that I would use these trucks as my entry!

This set of vehicles, along with the other 5 I am working on, have taken a bit of time to get to this point. Prep wise, there is very little stowage on them, mainly because of the nature of the trucks. However, I did want to follow the idea I had many many moons ago - the trucks should be made into little dioramas. This would mean:

- Bases had to be trimmed from those trucks with a cast on base (6 of the 8). These then needed to be added on to a FoW Medium base to allow room for figures to be added

- Figures suitable for dioramas had to be sourced. This was something I had been working on for a long time, which has now come to fruition.

- I would need to do 8 dioramas, which was a challenge in of itself.

- The dioramas had to be logical, follow a 'theme' for Normandy and work with each other (to a certain degree).

The concept for the 128th Field Regiments trucks was that they here being harassed by some unseen sniper. Something that was common in artillery positions which were moving forward to keep up with an advance.

So, with a sniper lurking in a hedgerow somewhere nearby, what would be happening in the battery position?

For the first base, I went for a typical event that occurs in every Allied account of Normandy I have ever read. Troops 'foraging' to supplement their tinned rations. As such, I have to likely characters, returning from a 'fruitful quick wander' round the nearby area. One of them clutching a cask of Calvados and the other with a chicken - which was "Awready deed when we fun'it Sur!"

Finding themselves on the receiving end of a snipers attention (maybe it was his chicken?), they have taken cover behind a truck. 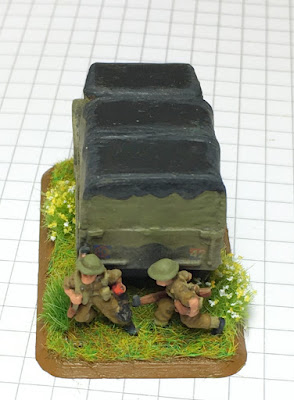 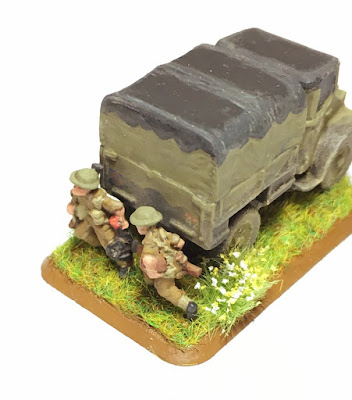 These figures are from the Battlefront 'Commonwealth Infantry' pack, with head swaps using the 'Guards' heads that were available separately.  The lighting in these pics isn't great, but it does look like the facial details need some work, as does the chicken! It is possible the light has just bleached them out a bit - they were actually both of squared paper when the pics were taken!

Next up, a survey team. This consists of an officer with a piece of survey equipment (my take on a 'No. 7 Director'), and a Private with a survey pole. The sniper has interrupted the work of laying the guns on the 'zero line', and the officer is looking rather impatient... Somewhere 'up front' an infantry unit might be looking for fire support. 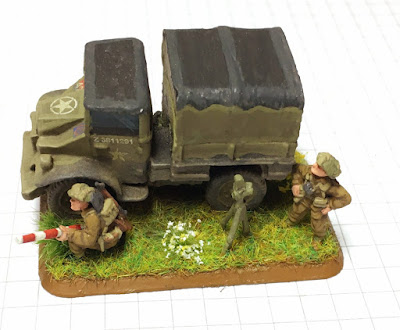 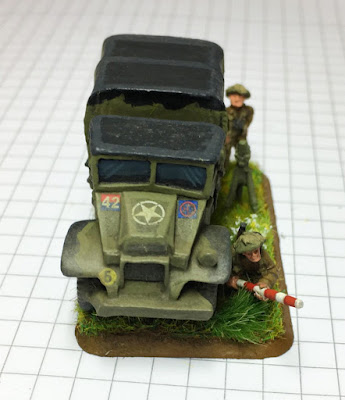 Both figures are older Flames of War infantry figures. The chap with the pole was actually a pioneer with a Bangalore torpedo!

Lastly, we have a 'patrol' of either local (infantry) Jocks who have been roped in to help, or some of the battery troops (they look a little too well equipped to be the latter). These guys are being sent out to deal with the sniper. I think the chap on the corner looks suitably happy about his role. 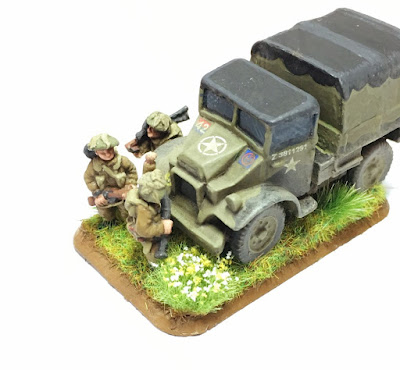 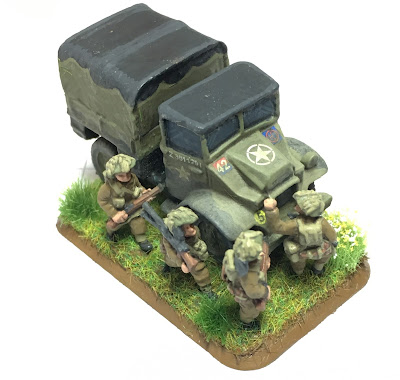 Some shots of the three: 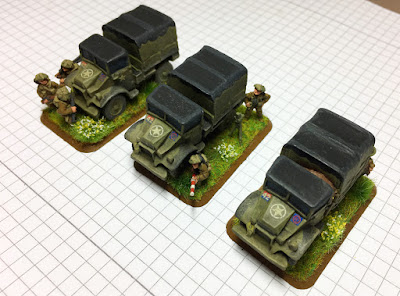 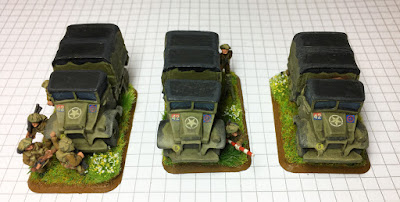 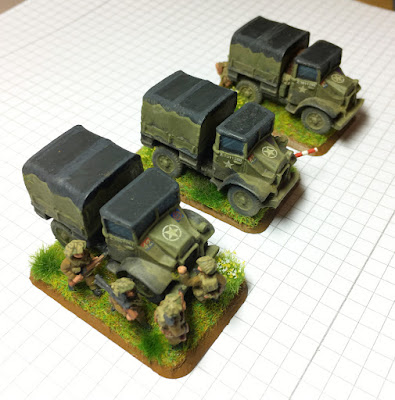 All three of them together. Imagine the sniper is somewhere 'above' the top edge of the picture. 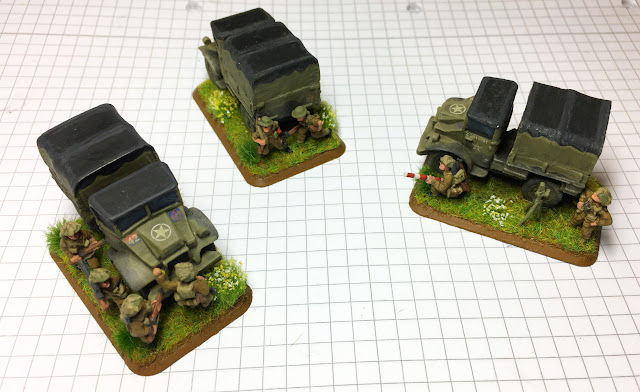 So that's it! I've another 5 of these to do, which I should finish this week in time for my Thursday submission deadline. If you like what you've seen here, can I please ask that you check out my entry here (and check out the other entries as well!). I'd appreciate it if you could take the time to vote on my 'Canadian Jock artillery vehicles'! My entry in the challenge also talks a little more about Canada's significant manufacturing contribution to the allied victory.
Posted by James MacCraggs at 16:53:00