I had hoped to post this earlier in the week, following the club game last Sunday. However, I was distracted by other things and no progress was made beyond a couple of pics being posted on Facebook.

This game was put on in the hall we hire in Billingham, and this was our 3rd time at the location, which seems to be going well. On this occasion, we managed to get all our folding tables up, meaning the table size was 17.5' by 6'. I believe Dave may have plans to add another table to take it up to 20', but time will tell!

The scenario was planned by Martin and using his 28mm figures. Unfortunately as a result of my bottom being wider than I sometimes remember, I knocked a box of Martin's figures on the floor during setup. I did dash off home to get superglue and no major damage was caused, which was lucky.

Gamers comprised of myself and Dave as the Union, Ian and John as the Confederates and Martin as umpire - we were playing using rules that Martin and Matt Crump have concocted, which are a bit of a mix of bolt action and black powder. Simple, but pretty effective. Martin has outlined the scenario and such here.

On with the photos then. Union objectives were the hill we were deployed on, the church and the bridge defended by the initial Confederate brigade. We decided early on to just keep putting our brigades (of which we had three, with two independent Cavalry units) onto the hill in order to ensure we held it. The aim was to just bulldoze over the table, split the rebel army in half and grab the church. 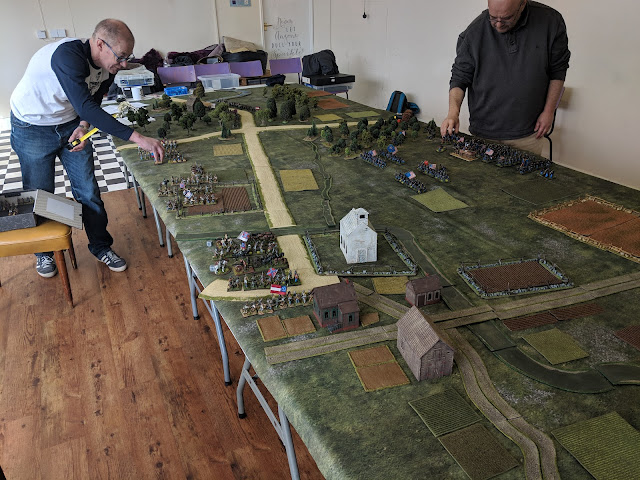 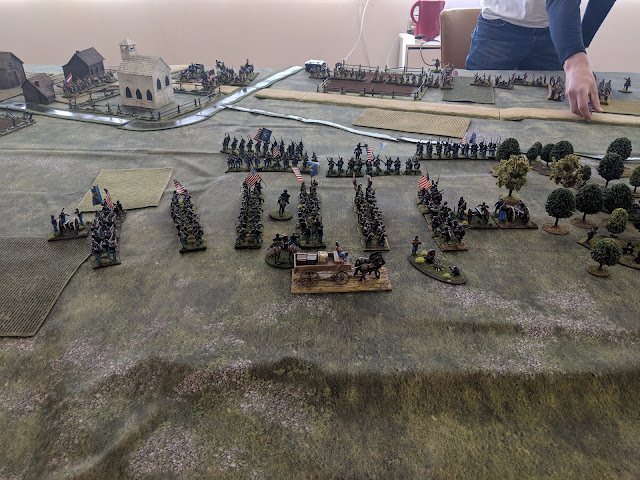 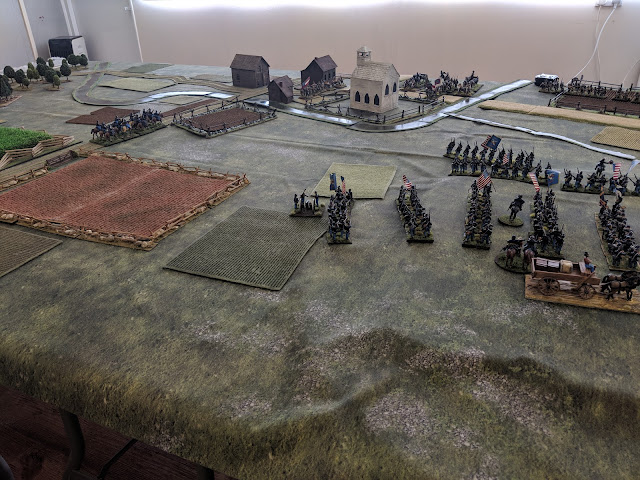 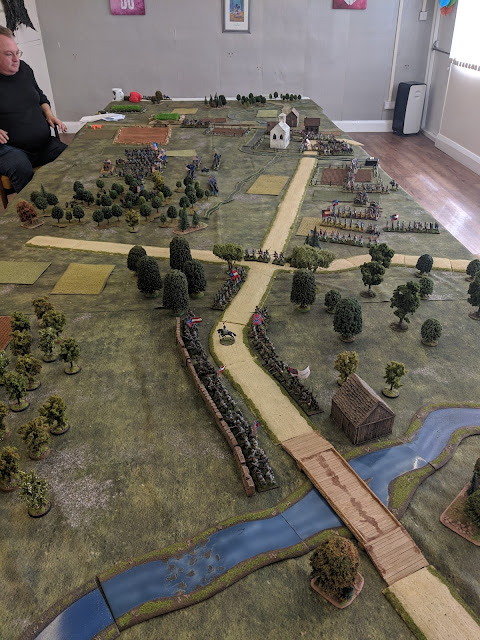 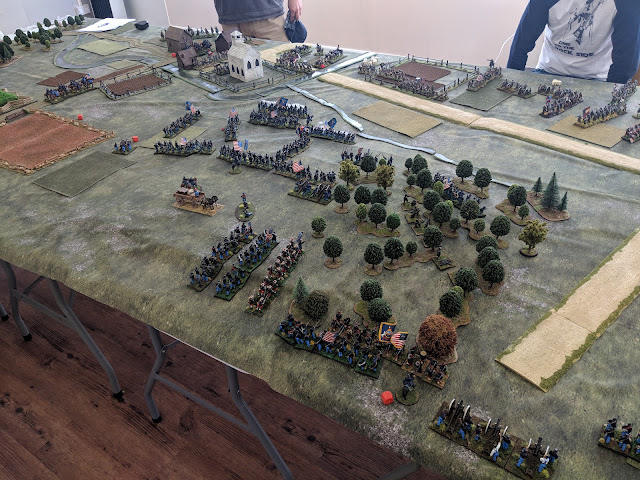 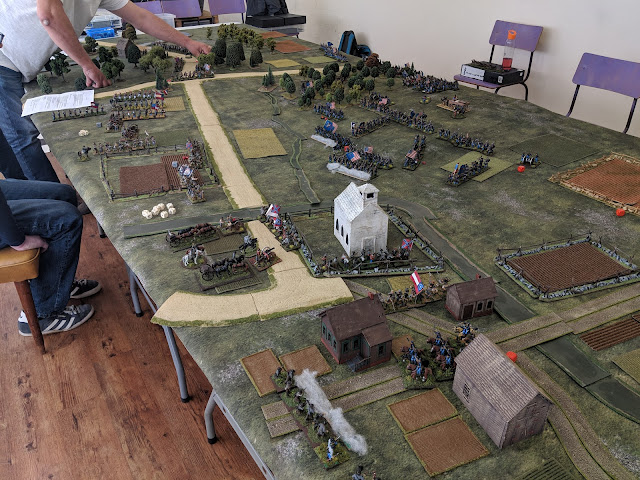 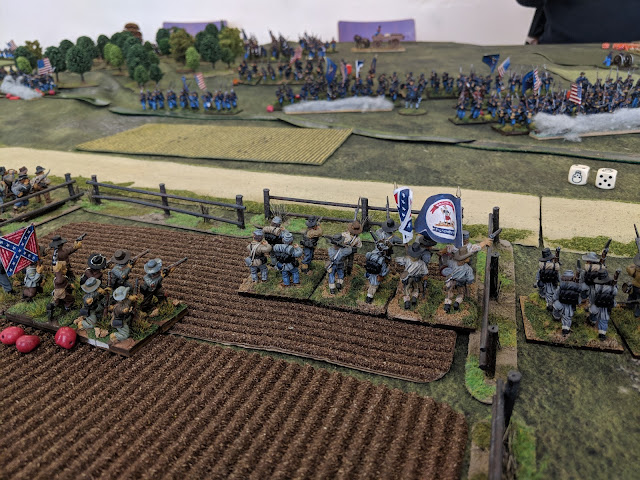 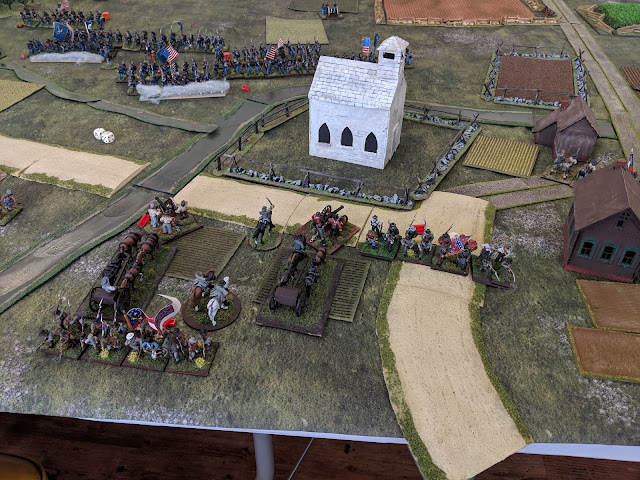 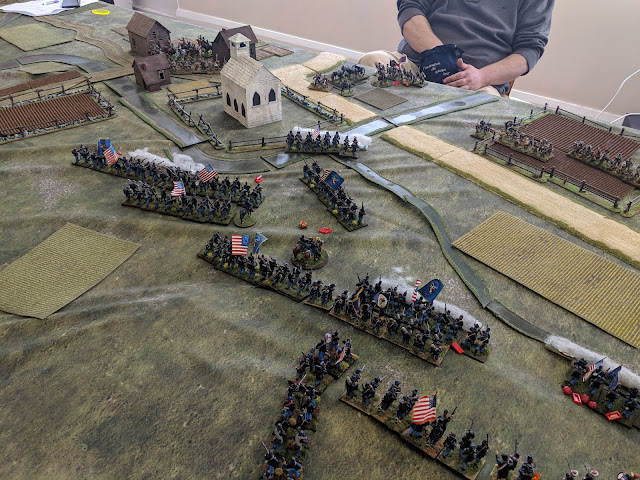 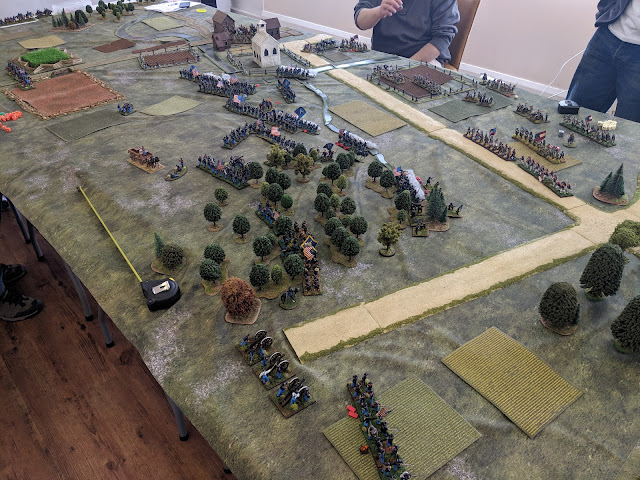 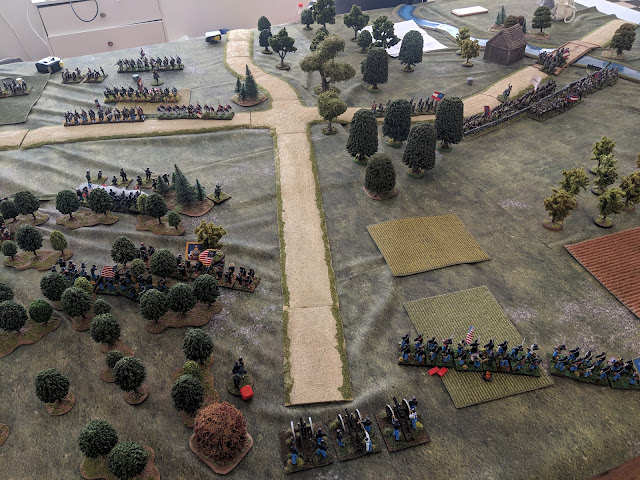 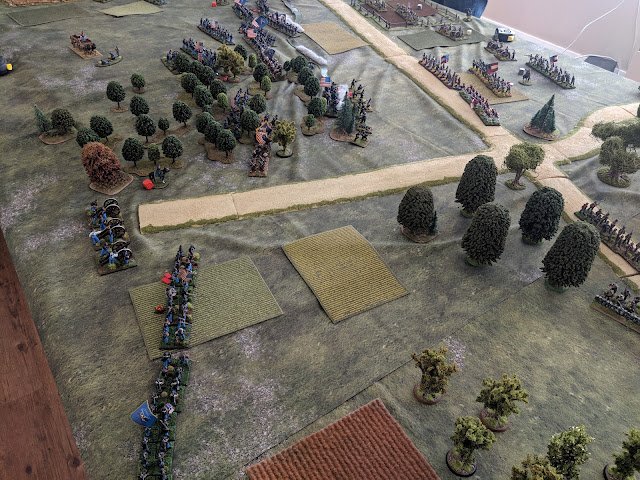 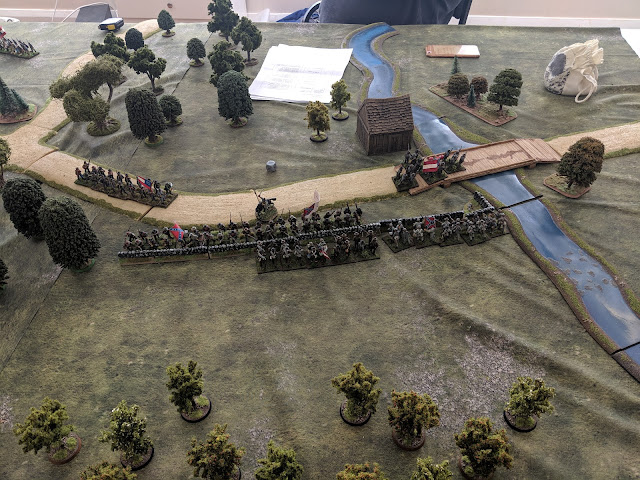 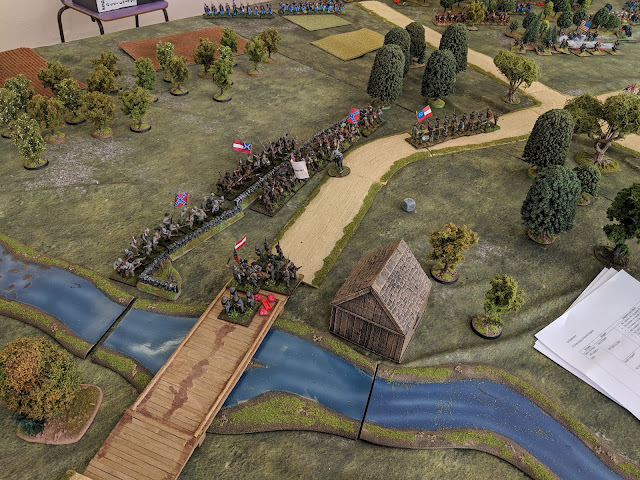 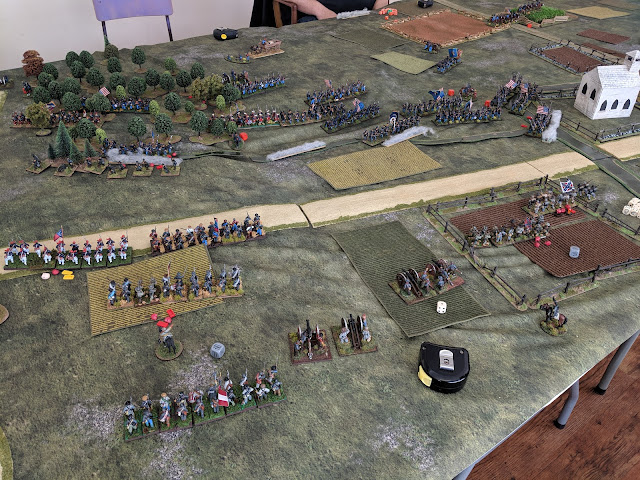 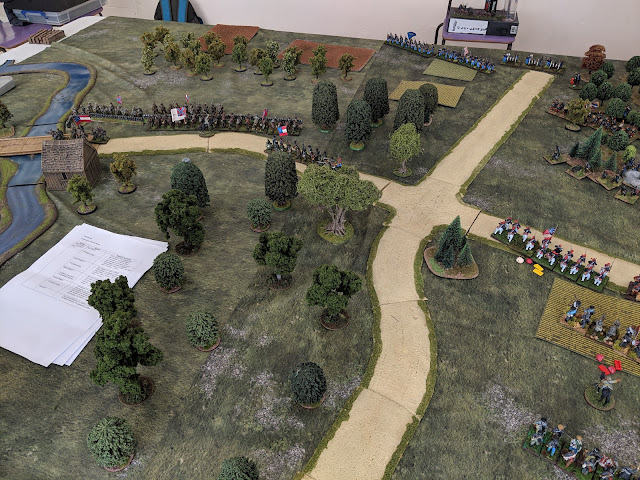 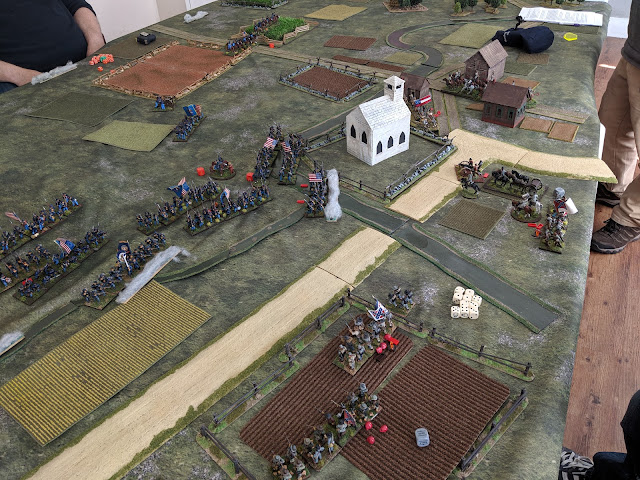 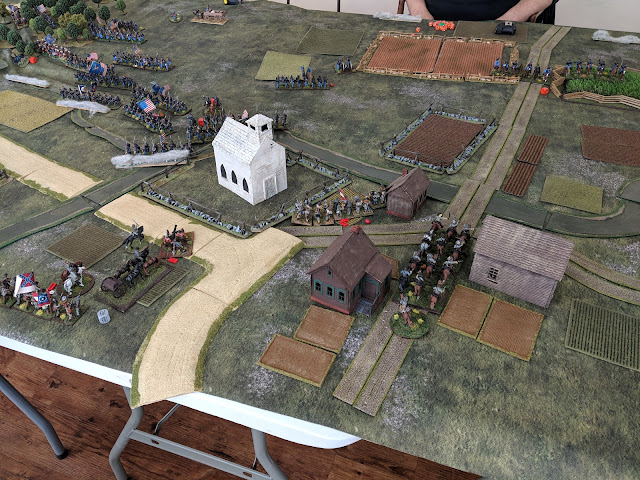 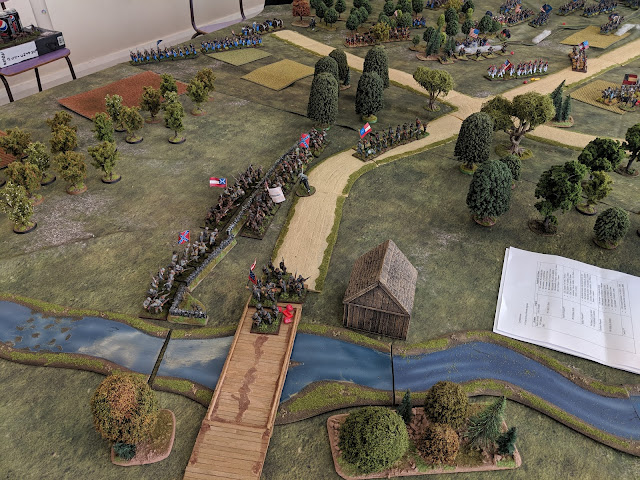 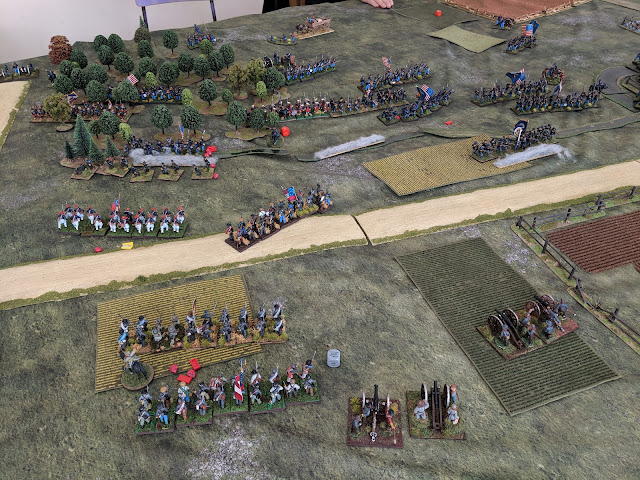 We finished the day about 3.30pm, having started playing around 10ish. The rules worked well and well had various tweaks and suggestions as we went along and encountered situations. Hopefully, we'll get some more games of this in the future, and I would be interested to try the rules using our 10mm collections as well.

A brave defence by the Rebels - but one of their brigades was out of the battle for much of the game, while the other three had a steamroller come towards them. Ian made some good calls, and seemed to be getting the hang of moving the blocks of troops after a few turns. But I know from playing GdB that it can take a while to get your head around deployment space from column to line, and not masking your guns, etc.

Next game we have booked at this venue is on the 2nd of June, where we are playing a 15mm WW2 game using Dave's collection. Utah beach at one end of the 17' and para landing zones/Brecourt Manor at the other, with a couple of the causeways in between. Dave has been working like a trojan getting beach defences, terrain and US infantry and Para's painted. It should be a great game!
Posted by James MacCraggs at 18:38:00