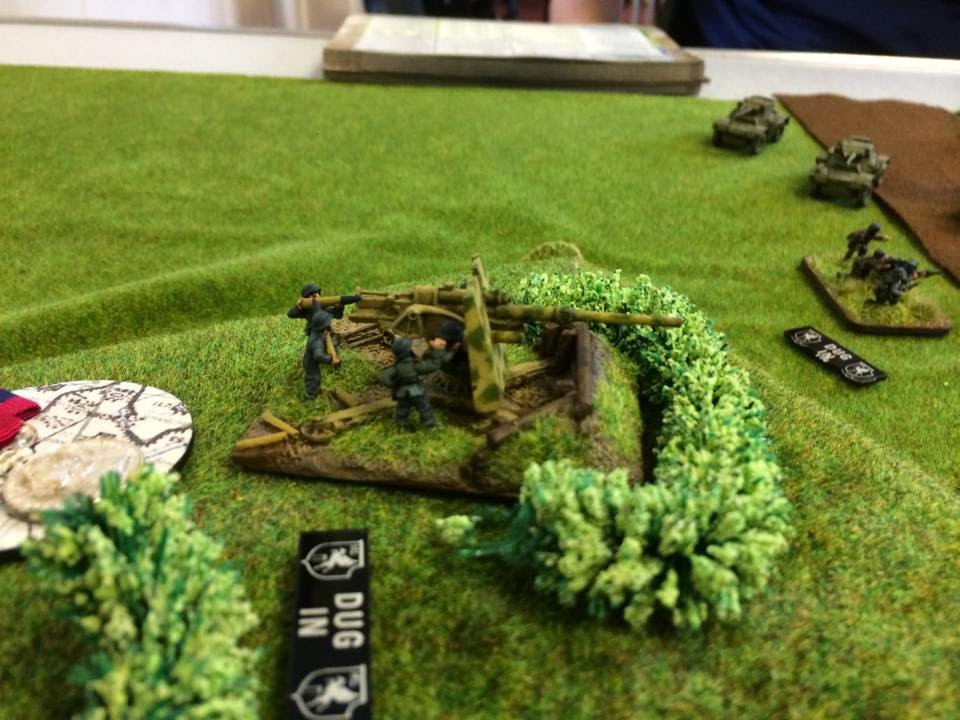 A rare Saturday to myself (due to A having a day out in Edinburgh), so Davey and YD picked me up for a day out at the Carluke and Law wargames club.

Myself and YD had agreed to play a 1000pt game of Flames of War, using our respective late war lists. As usual I decided to go with my Highland Division list from the Overlord book. YD went for a Fusilier list from one of his books (I think from Atlantik Wall).


We decided to play a defensive mission (No Retreat) as my army included a Breaching Group - meaning I had 'Always Attacks'. On the picture above (I forgot to take a 1st turn picture, so this one is 2nd or 3rd turn) YD is deployed on the right with his 2 Fusilier platoons and the MG platoon dug in and defending the road line and his 88's on the hill.

My army consisted of:


This was a bit of a strange army for me - it was mainly designed to include things I had just painted, had still to paint or just had not used. Built around the backbone of the 2 infantry platoons in Kangeroos and the breaching group. I figured YD might include some big cats, so took the 17 pounders. The Artillery I took for a change over the mortars, Bofors because they have just been painted and never used. Recce because I had the Humbers to paint (now started) and breaching group because I like my flail models and wanted to encourage myself to start the Churchills (now started). I also added M5 Halftracks on a whim, taking me up to 1025 points - but YD was fine with this as he had re-jigged his infantry platoons to give himself 3 platoons rather than 2 he had on his original list. 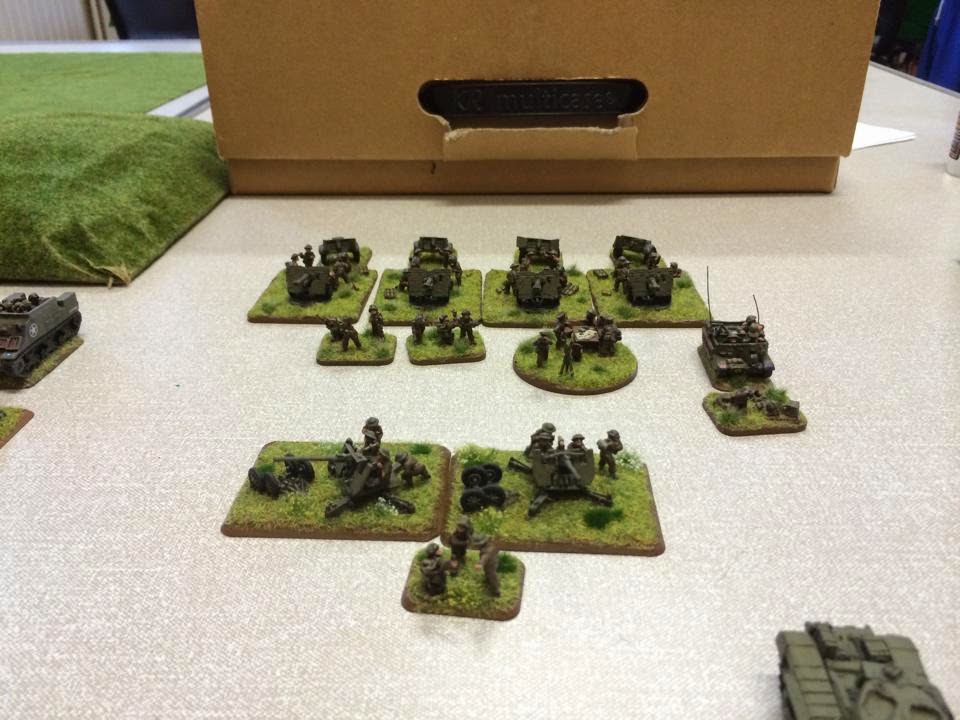 I decided to make use of the Night Attack special rule the Bits have - mainly because those 88's terrify me. Plus we always forget about the national rules and the Night Attack rule fits with my Totalise Highlanders theme. 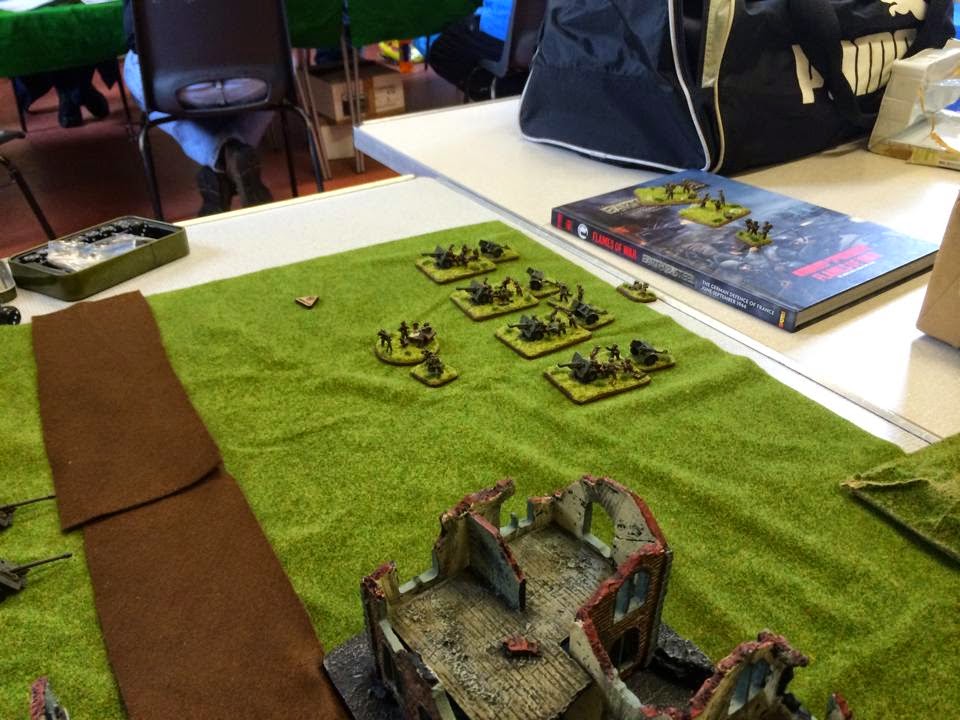 Given the layout of the table I deployed my AA platoon in the centre (where it did nothing the whole game - facing off against dug in, concealed and gone to ground Veteran troops...), with my breaching group on the left flank. My infantry, the recce and the A/T guns on the right planning to use the forest for cover to get into assault range of the 88's hill. Behind them sat the 25 pounders. The Churchill AVsRE went up the centre. 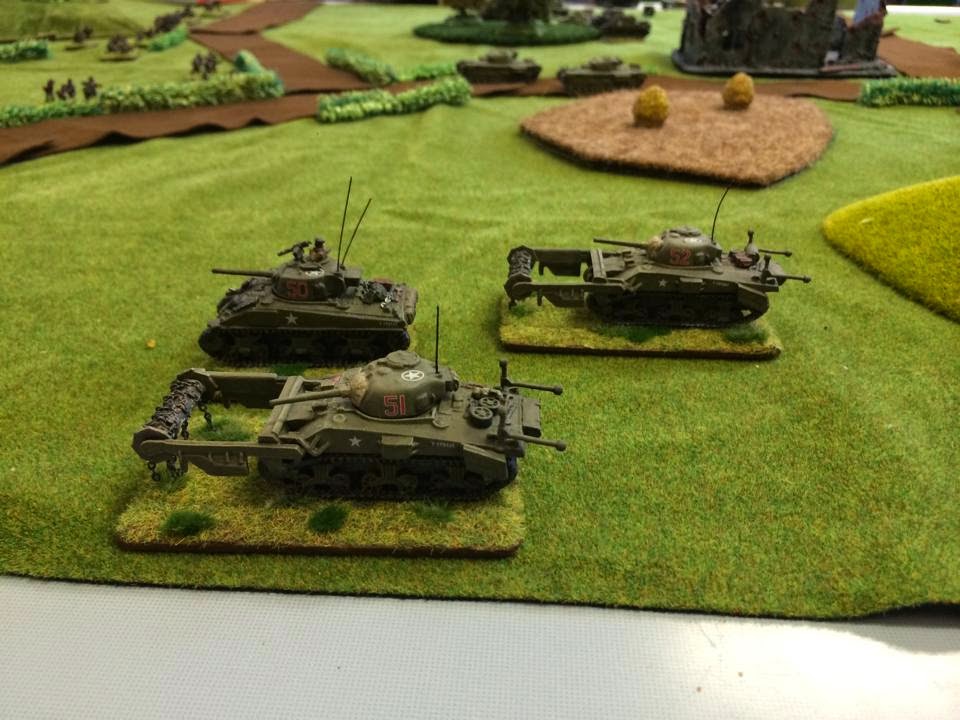 My main attack was going to be with the infantry in their Kangeroos supported by the Recce to help remove Gone to Ground and provide pinning fire. The 17 pounders were to follow up and deploy where they could cover the infantry from the StuG's I suspected would be wandering about.

You'll note the two Kangeroos at the edge of the forest. I had debated sending them via the forest, but decided to send them left around it. A conversation with YD made me doubt my choice, so I decided 'bugger it, they can cut through those trees!'. The Kangeroos spent the whole game bogging their way slowly through this tiny forest, only contributing by one of them laying down 50 cal fire that supported a later assault. I could have deployed the infantry from them, but kept them buttoned up as a ready reserve.

In the center my Churchills moved slowly closer.

By my turn 3 I had moved up my assault troops close enough to be ready to disembark, so out they popped.

In YD's turn 3 the sun failed to rise, but in the improving light his 88's managed to get enough of a bead on my Recce platoon (perhaps drawn by the tracer from their MG's shooting up the infantry to their front) and take out the two Humber LRC's. His infantry also managed to take a couple of squads of my Highlanders out as they moved up to the start line for their assault. 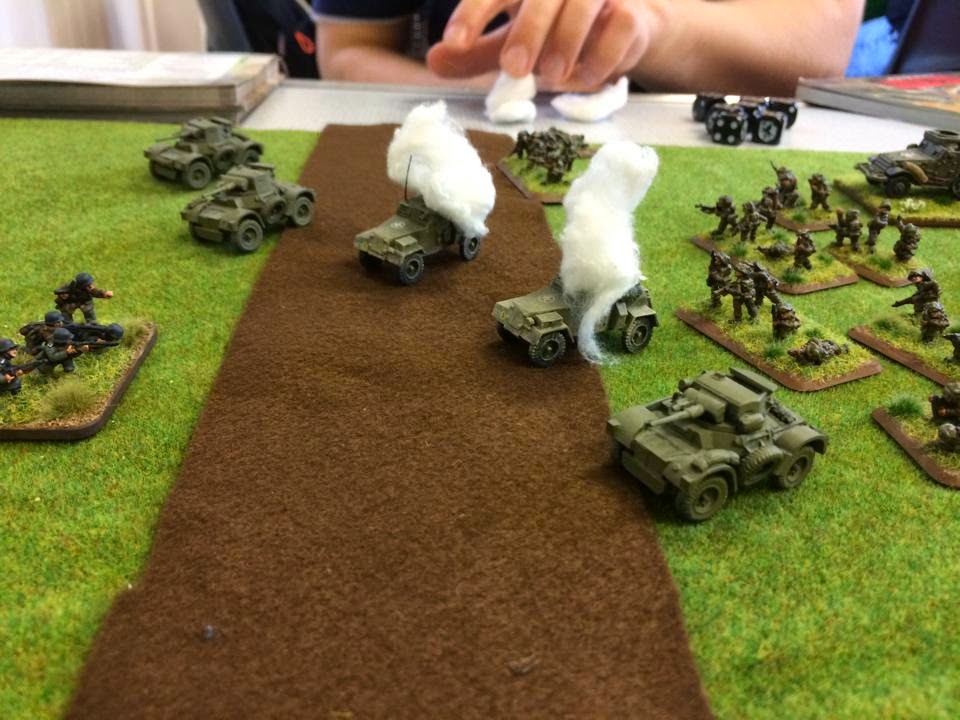 YD also managed to bring on his StuG's at this point, choosing to place them on the table edge where they were facing my infantry and recce.

The StuG's opening volley (again, a good roll on the vision distance chart made my troops visible) took out one of my Humber A/C's - however, the platoon passed it's motivation check to remain on the table.

The darkness proved to be a hindrance for both of us, as it seemed to take until daylight (at the start of my turn 4) for my FOO to realise he was looking at a brick wall rather than out a window, and call down fire on those nasty 88's - killing one and pinning the platoon. 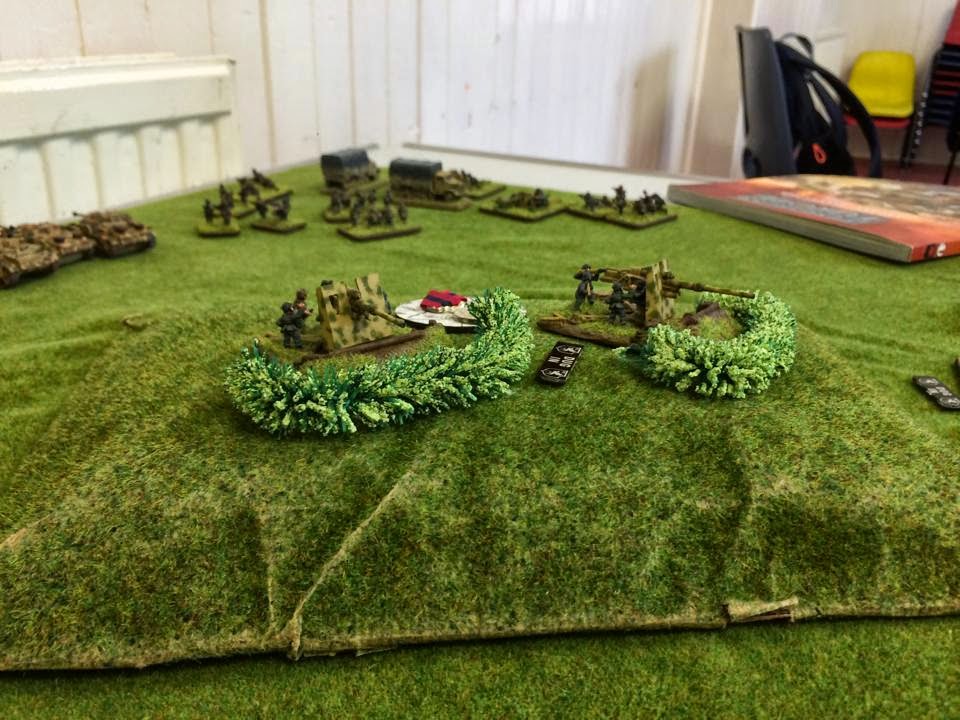 The other notable thing that happened on my turn 4 was the 17 pounders disembarked and swung into action. Only one gun had LoS to the StuG's, and managed to knock one of the predatory little Jerry blighters out.

Lots of shooting at the German Infantry at the base of the 88's hill (including from the Churchills, which I brought over from the center) preceded an assault, which failed to connect due to the only close enough highlander team falling to defensive fire. YD decided to counter attack, but his troops were put off by the skirl of pipes and failed to cause any damage. The Highlanders counter attack was not so gentle, wiping out the majority of the Fusilier platoon and causing it to fail motivation and vanish from the table. The HMG platoon also broke off, leaving the highlanders on the base of the hill.

In YD's turn he got his Pak 40's on, and had them deploy facing my Sherman Flails. His 88's unpinned and destroyed one Churchill and bailed the other - Petard Mortars unfired! 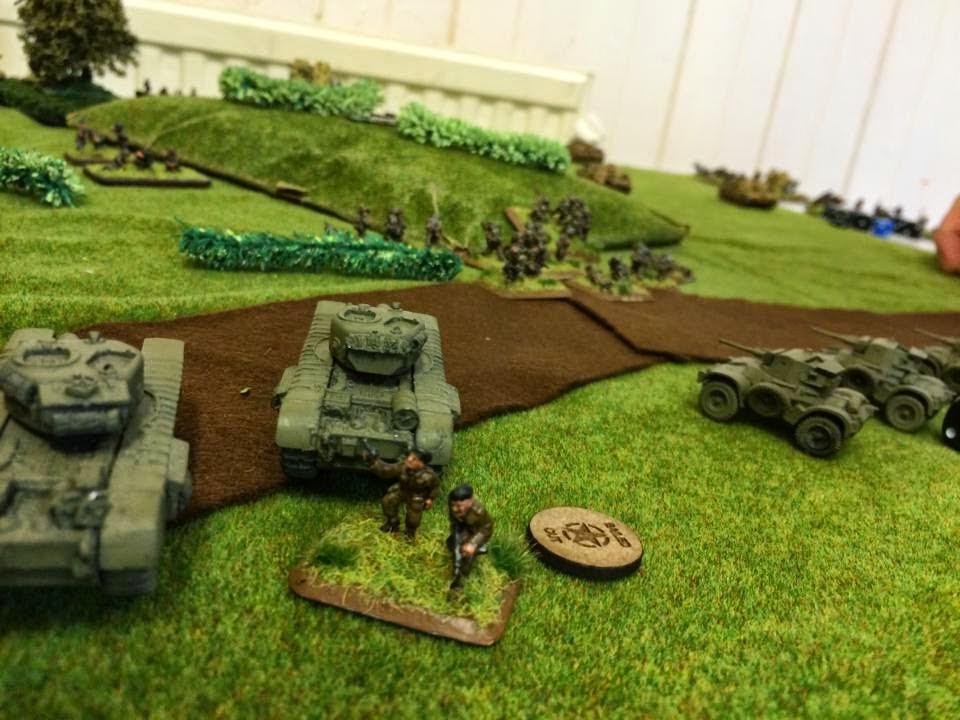 His StuG's moved up and killed one infantry team but missed the 17 pounders.  His remaining Fusilier platoon and the company HQ arrived from reserve alongside the PaK 40's, but were concealed by a wood and moved forward to protect the hill objective (and counter my marauding Highlanders).

Fire this turn from the Pak 40's destroyed one flail tank and bailed the troop command tank. These Shermans had so far spent the game shooting with no effect at the dug in, GtG, Concealed Veteran infantry... YD's HMG platoon had unpinned and killed one of my infantry teams.

However, in my turn revenge was swift. While the FOO called down arty on the remaining 88, finishing it off, the 17 pounders put three shots into the two remaining StuG's, knocking out the platoon. My bailed Sherman crew sorted themselves out and the two tanks left in the troop knocked out both the PaK 40's. My highlanders at the base of the hill moved forward and took out the remaining HMG platoon, causing the HQ unit to fail motivation and run.

My Humbers moved forward to a position behind the dug in Fusiliers - to try and remove GtG on them in a later turn and dash for the cornfield objective.

In YD's turn his newly arrived infantry assaulted my Highlanders on the hill top, pushing them back. (Damn reluctant rating). However, time was getting on, so we decided to end with a draw. As a little experiment YD's SMG Panzerknacker team tried an assault on my Shermans - mainly as we had never really used tank assault teams before. The final layout of the battle (lacking some smoke puffs):

And some of YD's lovely infantry: 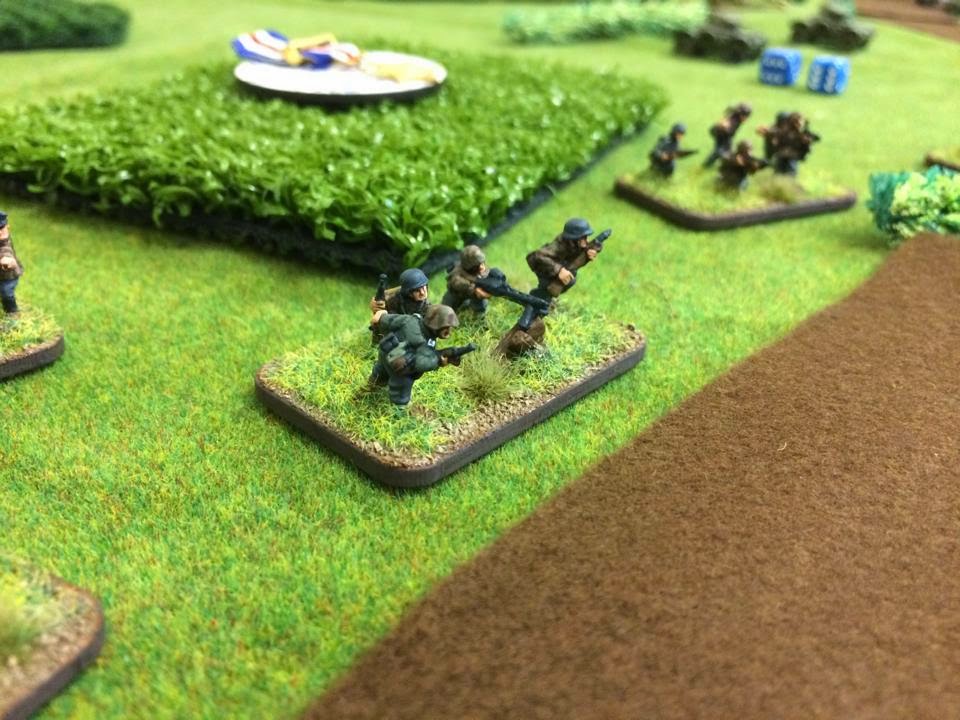 My most useful unit award probably would be a close run thing between the one infantry platoon I had in action, the 17-pounders or - to my surprise - the 25-pounders. Although the Night Fight rules meant the 25-pounders were silent for most of the game.

My most useless unit was....

The Bofors AA guns, which didn't fire a shot the whole game!

As games go it was quite quick, although we did bog down a few times (mainly on the assaults). It was also as good natured and fun as ever. It also seems to have given me the kick up the bum I needed to start working on the unpainted units I had taken along for the day, so hopefully I can post some progress updates on them soon.
Posted by James MacCraggs at 01:55:00