This week I made an attempt at what I thought was going to be a never ending chore - in the form of 12 Universal Carriers and 3 Wasp Carriers. A video blog of this weeks work can be found here:


These guys are another group of models that have been sitting looking at for a long time, but kept putting off as I felt they would take a lot of work. While they are not finished yet (I'll talk about that in a bit) I'm quite pleased to have gotten so far so fast. 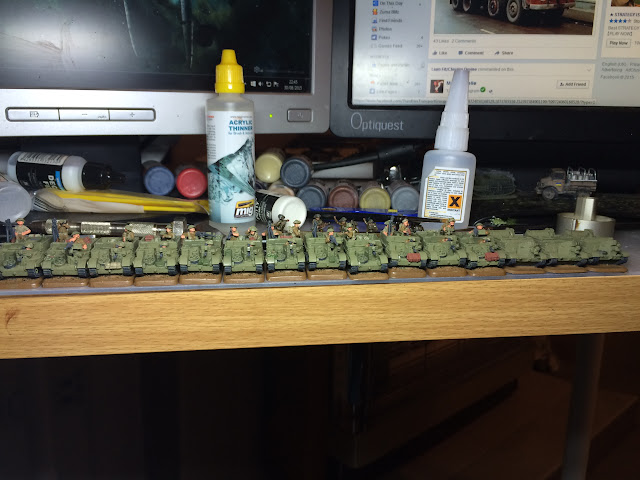 I've posted before about the crew poses - these were purchased well before the new Battlefront sculpts came out and I had to bodge a lot of it. The PIAT crews are one example of this, as is the .50 cals and crew.

Painting was the standard Russian Uniform (Vallejo Model Color 70.924) which I hand painted over a spray of the Plastic Soldier Company British Armour spray. I really mucked up with the spray paint on these guys, getting it too thick in places and missing other parts altogether and ending up with a rough finish. Spraying these outside also saw the models covered in lots of tiny bits of plant material that have been a real nuisance. I'm not sure I'm going to go down that path again... But the speed of applying a spray undercoat does still attract me. Perhaps I should give my airbrushing a shot again at some point.

Some close up shots: 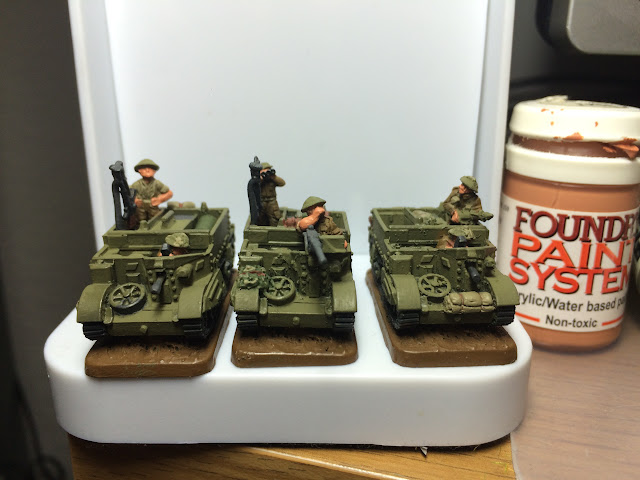 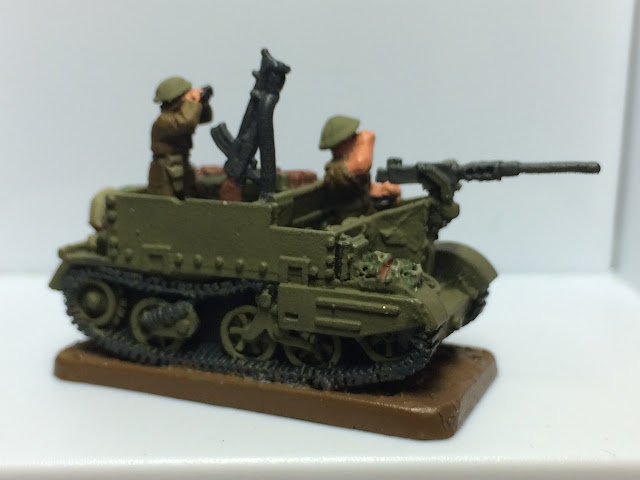 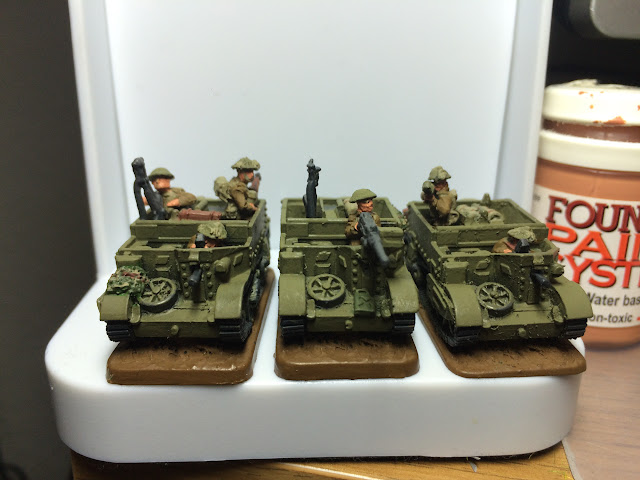 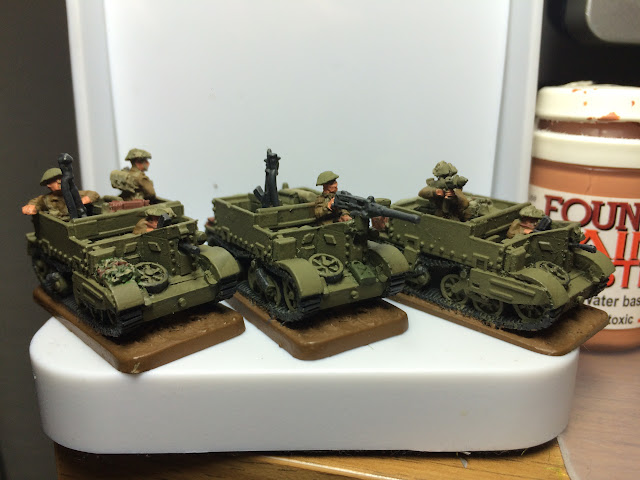 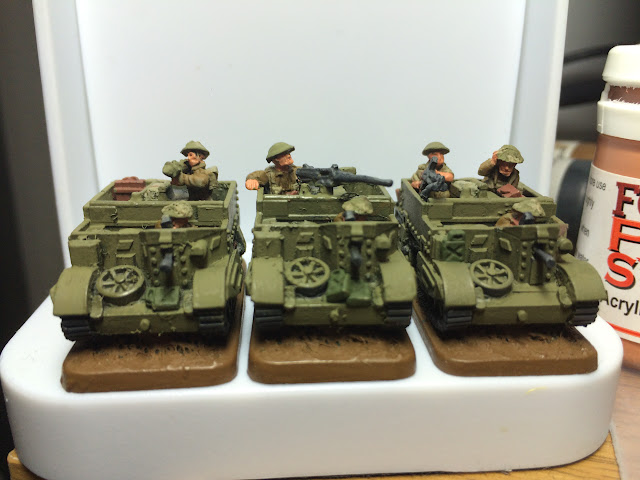 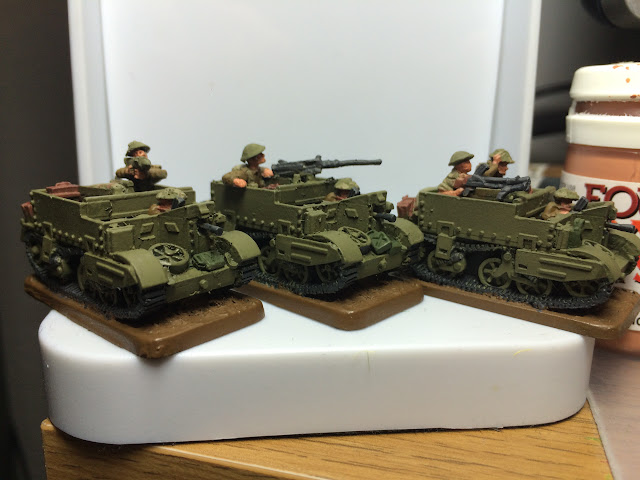 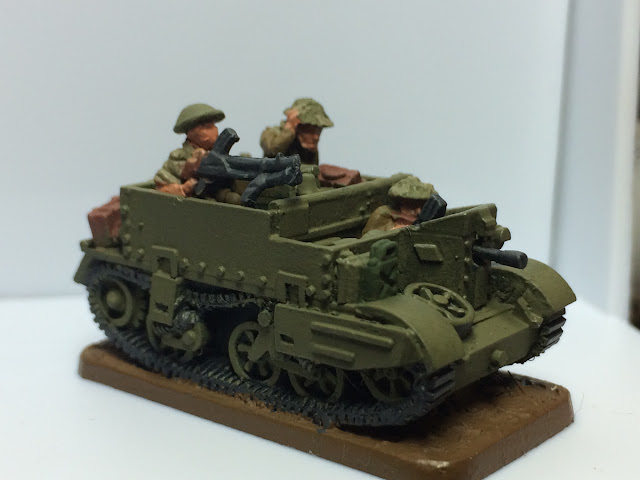 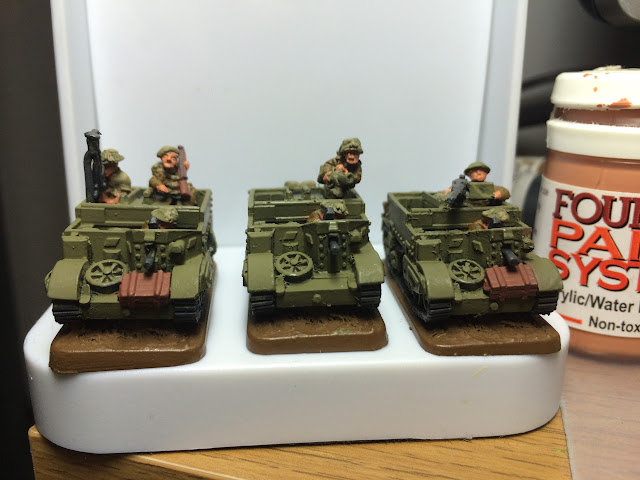 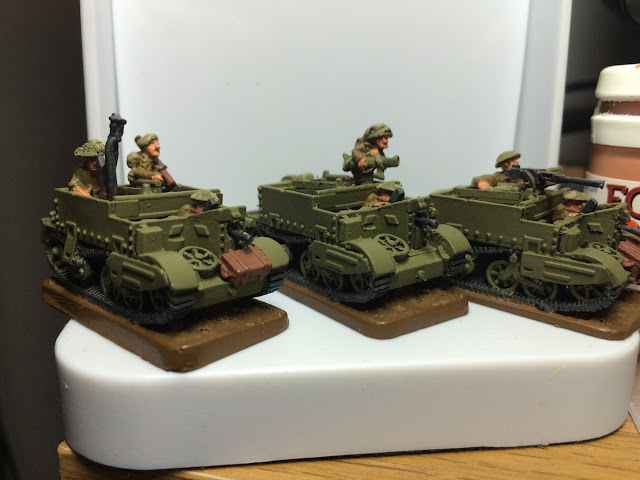 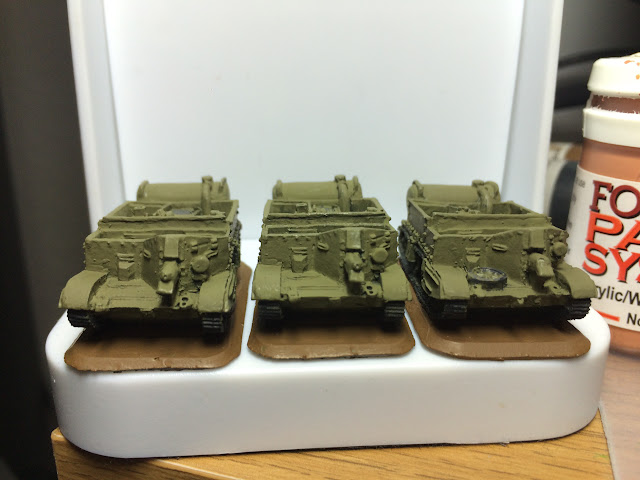 So each group of Universal Carriers includes a PIAT, a .50 cal and an extra hull MG carrier, giving one of each in 4 squads of 3.

One big change for me was the painting of the crew figures in the vehicles. I would normally paint these separately and glue then in once the vehicle is done. However as a lot of these figures were conversions or cut down normal infantry, painting them separately just was not going to work.

I also took some time to fix these guys: 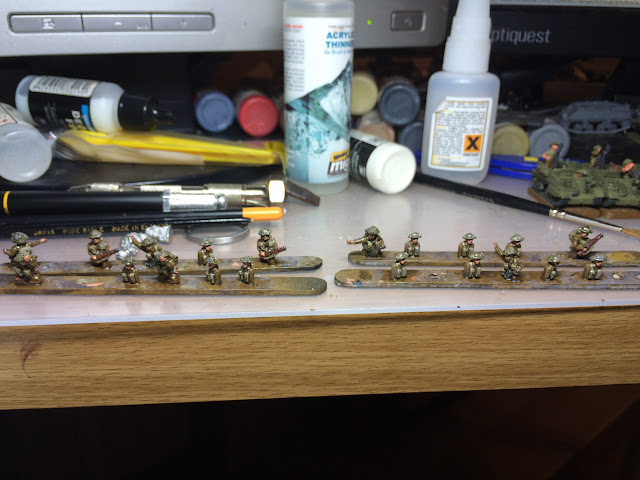 Which are Forged in Battle crews for the Universal Carriers and Loyd Carriers. These guys had been painted last year some time but had gone cloudy when the matt varnish had been applied. They had sat on the shelf waiting to be repainted for quite a while until this weekend when I decided to try the paint on gloss trick on them. This seemed to have worked! I just need to give them a quick re-highlight and they are good to be used. I realised when working on these guys that the Loyd Carriers and Universal Carriers for my 4.2" Mortar platoon are all uncrewed!

To crew the other models I have in my unpainted mountain, I have a stack of vehicle crews to paint (again!). I prepped them this weekend as well. 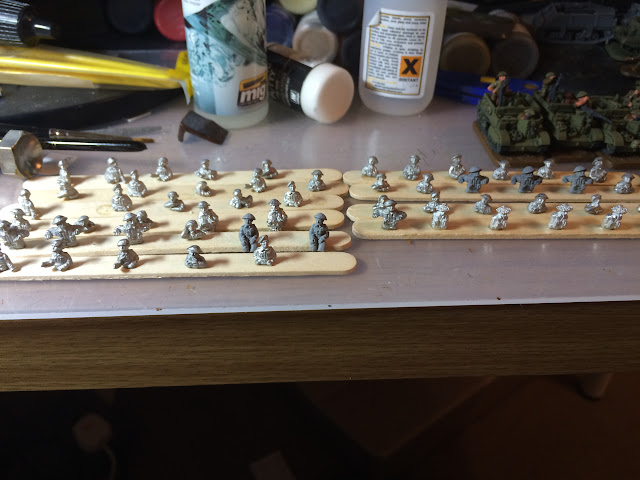 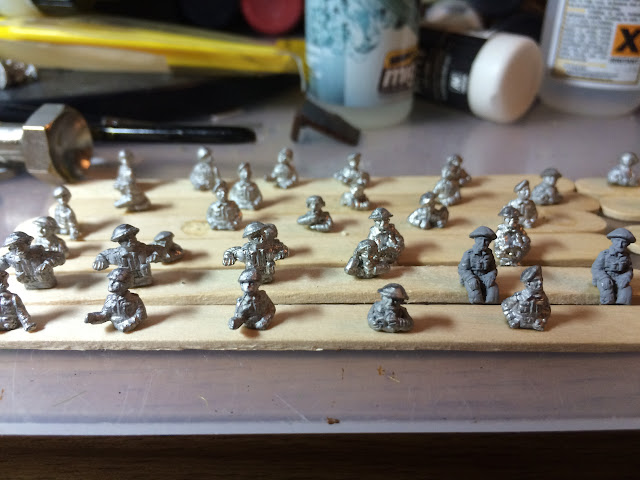 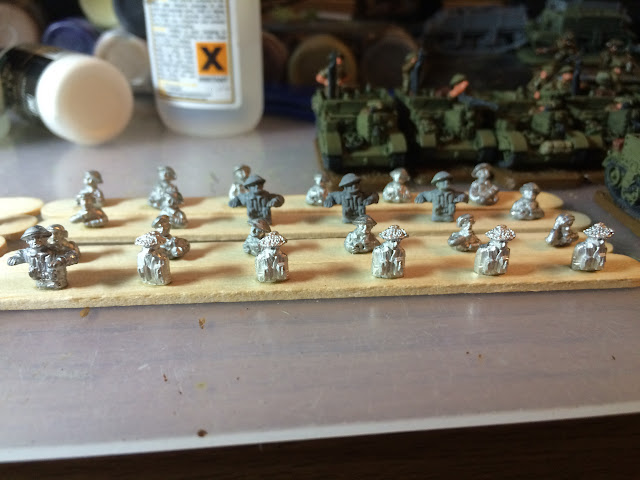 I'm moving (again) in October from bonny Scotland to North East England - Middlesbrough area to be more accurate. I've got a transfer from work which will save me a 15+ hour a week commute into and from work while at the same time putting us in the same area as all of Amy's family. I've not much tying me to this area other than friends, a few family and a vague hope that I can see my son (which has happened once in the last 17 months). It seems unfair to be keeping Amy from a family she is very close to just so I can live in my preferred country. So off we go!

The hobby impact on this is a bit of an unknown. What I do know is that in the short term we are going to be staying with Amy's parents while she looks for work. I'm a bit wary of varnishing anything while staying in someone else's house, so I am planning on getting a few things varnished prior to the move. This means I can just highlight and decal while there, which means I can still make progress towards the challenge. So other than a coat of Army Painter, these Universal Carriers are done for now.
Posted by James MacCraggs at 13:55:00