A productive week for me, with a focus now on getting my first German Platoon finished and some basing done. The plan is to re-base the figures donated by Lee and also base the Battlefront platoon built from the figures purchases at the York show.

30 figures have been primed and main colours blocked in. I got a lot of work done after I took the picture - including an attempt at Heer camouflage. These guys are now close to being washed and highlighted.

It's been a bit of a slog for me as painting infantry is not my favourite part of the hobby and I am aware that this is the first platoon of many. I'm also unfamiliar with the figures and colour choices. I'm certainly unused to my paint pallet having so many varied colours on it! 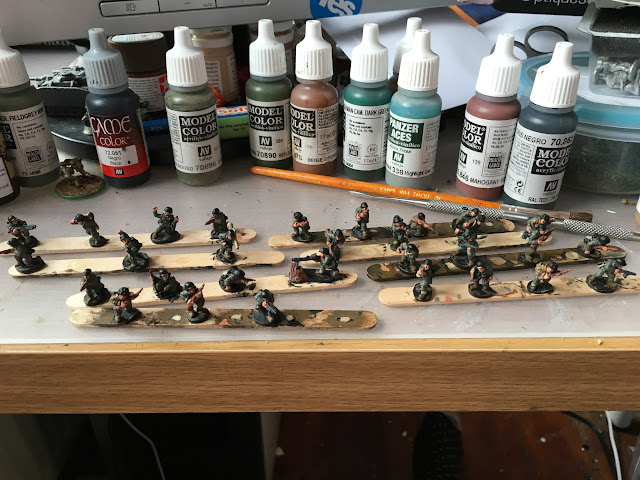 Some close up pics will follow, but as usual it seems to be the paint and chats which are helping me keep up the pace. I've a small order to arrive from Wayland (*sigh*) and then the Germans should be done other than minefields and MG nests. I also ended up with another pack of Late War Grenadier models as the pack I picked up at York was missing enough machine guns. However, these models are horrible... they will make a recce platoon as well as providing the MG teams I am missing for #2 platoon.

In other (allied) news, my new pack of 3" M10's arrived - so the finished M10s will need some work to swap the guns, remove the crews and add armoured roofs!
Posted by James MacCraggs at 20:56:00