As I mentioned in a previous post, I was at Carronade on Saturday with some of my wargaming friends. Paul had a bring and buy stall and I managed to sell a few bits and bobs that I'd had for years and was never going to use.

The spoils of this put a little money in my pocket, so off I wandered to try and find something to buy. Lots and lots of options at a show this size, however nothing was really jumping out at me. I spotted a stall that was selling something I had been waiting for coming out - Plastic Soldier Company's M5 Halftrack. At the same time, a conversation with young David who was checking out the Tigers on offer from the same company, turned towards the amount of Jerry armour he has - specifically the number of Tigers and Panthers...

Now, my current Flames of War Highland Division force does include a platoon of 6pdr A/t Guns (4 of them - I need another two guns and two Loyds Carriers to round this out), along with my Shermans (which include a Firefly). Not a great deal of anti tank firepower when faced with a veritable German Armoured Division!

One of the things I had considered adding to this had been a 17pdr Anti Tank platoon - but one of the design concepts behind my army is that it is from Operation Totalise, so everything is fully mechanised. All my current units have transports, with a blog on the infantry's APC's to follow. So, I wouldn't just need the guns, but the transport as well. Which, on top of the 2 packets of BR521 for the guns, would have required 5 blisters of BR201 (total cost for the unit, £37.50 for the Halftracks and £26 for the guns -  £63.50!!!!).

That's a lot of cash for a small unit!

I was glad to see then, that the plastic M5 Halftracks were out and that they come in a pack of 5. This, along with a discount on the guns, meant I spent £38.50 for the whole unit. Quite a saving! 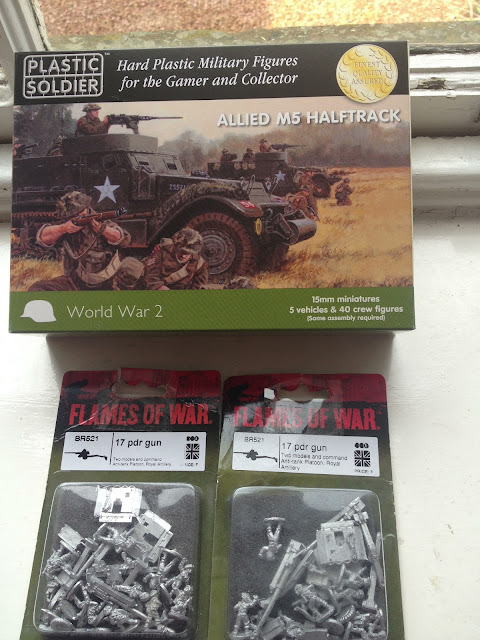 One thing that's nice about the blisters of guns is that they include the large bases and the command team for the platoon. I base all of my vehicles, so I will need to pick up another 2 large bases to mount the M5's on (I've 3 left over from previously). For these I order from Warbases who were present at the show but I thought I had enough spares. C'est la guerre!

Alongside these purchases, one of the stalls had some 1/144 scale Revel Hawker Typhoon Mk.1b kits for a whole £2 each. So I grabbed one of these as well! 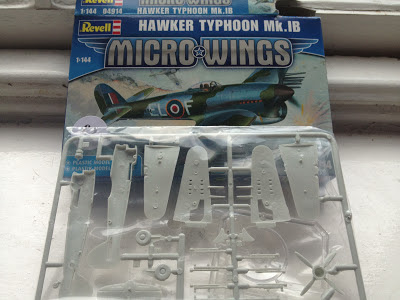 This will give me a little bit of air support to take out those pesky big cats as well! The kit includes basic decals and a flight stand. I've never painted any aircraft, so this will be a bit of a task - getting those invasion stripes right is going to be interesting!

I also picked up some more Flat Earth Vallejo paint, as I use it for basing and have gone through quite a bit, and some laser cut wood strips. 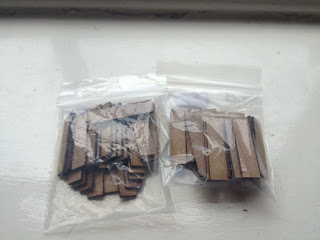 I've a vague idea of how I could turn these into dug in markers for my army, but that's going to be a bit of a future project for when I have a wider selection of basing materials.

So basically, an example of how the stuff you buy is sometimes dictated to you by external factors!
Posted by James MacCraggs at 14:25:00