A busy couple of weeks for me which has seen me make not very much progress on these damn 40mm Bofors guns. Still, today I managed to get the bases mostly done. Hopefully tomorrow the weather here will be good enough for a spray of matt coat for the guns.

Last weekend was my birthday, which I spent with A and her family at her niece's christening. Which was a lovely day and the wee one was beautiful in her gown and very well behaved. As A is also her Godmother, I was on photo taking duty! A got me some lovely gifts, which included a box of 25-pdrs from Battlefront (exactly what I had asked for!). This will give me a full Battery of 8 guns.

And this is where Battlefront customer services comes in again!

I've added my own emphasis.

Well it turns out that the box has been changed since the spotlight article was done - which is really the only thing on the website that contains any detailed info on what is in the box. I assume that the things that were missing were the things most people would ignore - the Limbers.

So, being a stubborn sod I emailed Battlefront customer services to complain - replacing missing limbers would cost me money. It would actually double the cost of the transport for the unit, as instead of getting only two packs of BR277 Quad Tractor I would have to get four of BR276 Quad Tractor and Limber (x1) as I could see no where else that sold the Limbers by themselves.

Probably Battlefronts intention when they changed the box!

I complained on the basis that the webstore still says the Limbers are included and that the only info on the website about this product was inaccurate. Thankfully the chap that responded was very understanding (after an initial misunderstanding about what the Limber actually was - fixed by sending him the links to Battlefronts own products). The emails were sent on Monday, by Thursday I had 4 brand new limbers to go with my new artillery troop!

The Scenic bases are very nice, but I'm not very sure about using them as the other Troop doesn't have them. Also, I have an issue with the bases looking like the guns are 'dug in' - which is a separate rules thing. At this stage I may sell them on (or trade them, if anyone has anything interesting to offer in exchange). The command base I'm not sure I will use, but the models for it may come in useful - especially the dispatch rider model. However, the quest for a WW2 British dispatch rider on motorcycle continues.

Final picture for the blog (as it's been a wall of text). The cake stall I was helping to run last Saturday that raised nearly £200 for the church A's family attend. 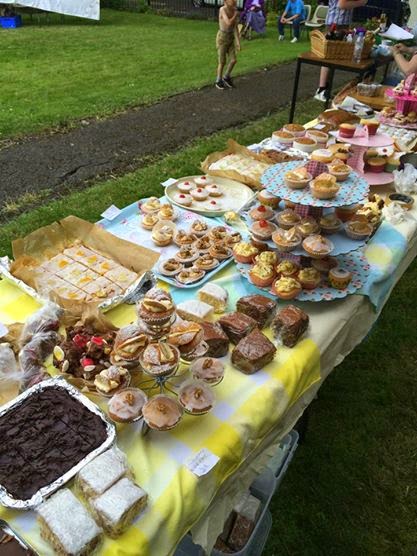