Not much to report painting wise, unsurprisingly. I've repaired some chipped paint and replaced a couple of radio aerials which had gotten badly bent through becoming trapped in various turret rings, etc, while working through my boxes of miniatures rebasing. I've discovered a few turrets which are missing magnets, but that it is a job for later. Drilling resin needs to be done outside, and while the weather has been nice, I've had other stuff on.

Two boxes have now been completed, which freed up enough space to allow my Cromwell Squadron to fit into a tray. I also made the decision to put my Crocodiles on a base with their trailers, rather than them being separate. In v3 of Flames of War, the Crocodiles could lose the trailer after firing the flamethrower and become a gun tank, whereas in the current edition the fuel isn't as limited (which seems more realistic). Nothing looks as cool as a tank with a trailer...

This does mean that the Croc's take up a bit more space, but the individual trailers were a nuisance to store due to their shape, so having the model all together is actually better.

I also updated my engineering vehicles and tanks, which were moved onto the smaller bases. I have changed the selection of tufts, which I'm not hugely keen on, but they look better in the pictures. There were a unit of M10s on the same tray, which have been moved elsewhere as space has become available: 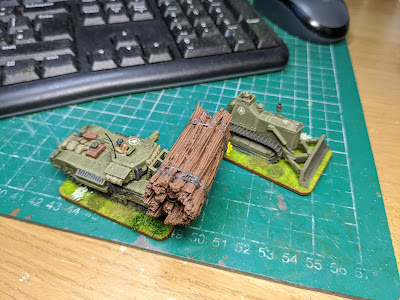 It wasn't just the allies who got some TLC. This tray went from being full of German vehicles with no room for anything else, to allowing me to fit my burgeoning Sherman DD squadron in. I'm sure they start arguing every time I close the lid. 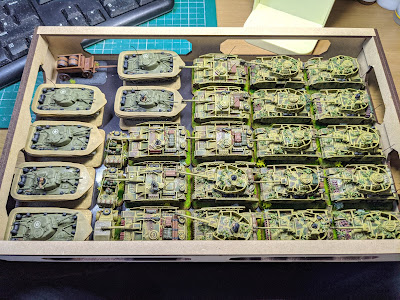 The process or rebasing is pretty straight forward as I'm only tacking vehicles on large bases - but it is slightly time consuming. It takes time to actually prepare the bases prior to shifting the vehicles on to them. I've also been disassembling the old bases, saving what tufts and such I can, while also re-using the ferrous sheeting on them for the new bases.

Two 9ltr boxes with vehicles are left to tackle. One, with German big cats and a few bits of Allied bits and bobs shouldn't take much work. The other contains my 144RAC squadron, which I am going to be spending more time on. In addition to updating the basing for the Shermans I plan to get all the decals up to scratch and possibly do some more cosmetic work to bring together the whole unit visually. This was my first completed unit, and was collected and painted over a long time, so has more variance than my current units (as I now try to tackle whole units at once to avoid this issue).