With the Polish Cromwells now done, I moved on to a bit of administration. Mainly driven by the fact that I've no space to store the models I've just painted.

Over the last few years I've been transitioning to using 9 litre Really Useful Boxes, with Sally 4th storage trays, for my model storage needs. I place magnetic sheeting in the trays, and have ferrous sheeting on the bottom of the miniatures. This allows for a pretty efficient use of space compared to my previous methods.

Note: Dave does this differently. He places ferrous sheets in the trays, and has bases with a circular hole cut into which he glues a 2mm by 5mm magnet.

Recently, driven by seeing the smaller, neater, 60mm by 40mm bases that Dave uses for his 15mm vehicles, I have switched to the same method. The bases just look better for the scale of the models, and have the added benefit of using less space on the trays. How much less space? Here is a visual demonstration:

Using the Flames of War 'Large' bases, as I have done for years, I can fit a whole tank squadron on one tray. 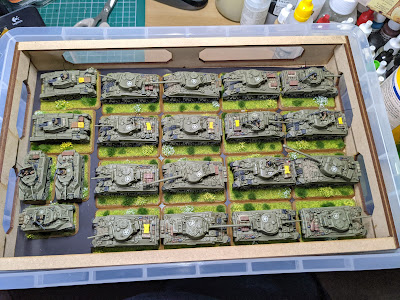 However, the same models on the smaller bases: 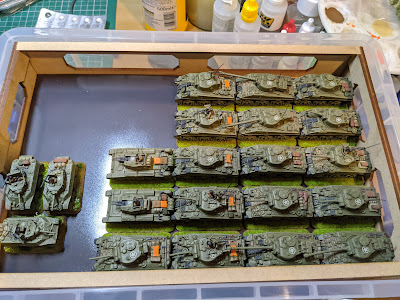 Now, rebasing all of the relevant models onto the 60mm by 40mm bases is going to take some time and effort. There is a cost implication (money for the basing materials, my time). I've had to spend a bit of time weighing all the pros and cons as to the best course of action - it is, after all, a fairly large job.

For the cost of rebasing, I increase my existing available storage by about 25%, while also making the models look a little better and updating the basing on some of my older models. One of the first batches I handled were my Polish Sextons:

Not a huge difference, but much neater and more focussed on the model.

Many discussions have also been had with friends who use file boxes, etc. Yes, these are often cheaper, but for the scale of mini's I collect, there can be as much as 2/3rds of a physical container as wasted space, which means I need more space to store the same number of models. The 9ltr boxes with trays store a lot of minis in a comparatively small space, stack well and are more resilient.

My plan is to work through one 9ltr box of models at a time. My pass over the Polish Shermans box also saw me correct and error I'd made with them (the only repainting I have done) - WW2 allied air recognition panels appear to have been a bright red, orange or white. While yellow smoke was used during Operation Totalize to mark friendly units, the colour panels on the tanks I'd painted yellow were incorrect, so I changed them to orange (having given Amy the choice).

So there you go - the madness continues.