I've continued work on clearing the contents of the painting shelf. The most recently completed model, from my Cruel Seas British fleet box, has sat there since December last year and has taken me a while to get going with it.

Completion was further delayed due to work on transcribing some paper DnD maps into an electronic format. This week I put a bit more effort in to get it 'done'.

This is a converted fishing trawler, taken into Royal Navy service and used in a variety of roles, including ASW patrols and mine clearing. 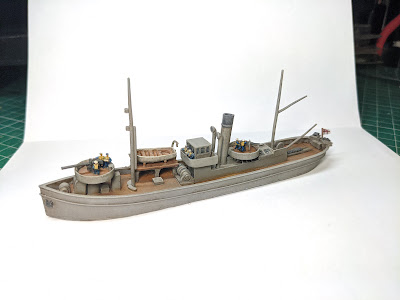 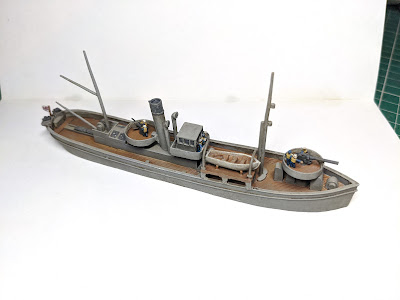 I've added some crew from the Cruel Seas British crew set. I also upgraded the weapons to something more like those seen on period ships. A fore mounted 3" artillery gun, and a twin Oerlikon in the rear. It also has depth charges. The standard loadout for these ships in Cruel Seas would be 2 x 3-pdr guns, along with a range of machine guns and an HMG turret (which has no representation on the model).
I've painted mine in a rather neater Royal Navy scheme than those commonly seen in other collections, mainly because my limited research didn't show these to be the rusted tubs everyone seems to think they were. Most pictures show them to be well kept and in clean grey, which is what I've done. Not sure the Royal Navy would tolerate any vessel being a rust bucket - any more than the army would have rusty tanks...
Posted by James MacCraggs at 00:51:00