With this years Analogue Hobbies Painting Challenge now well and truly rolling, my first entry this year was not - as I had planned - half-tracks.

Instead, I painted up three of the recently acquired 3d printed models that were sitting on the painting shelf. These models have been decaled up as supply vehicles from 'A' echelon, 144RAC. 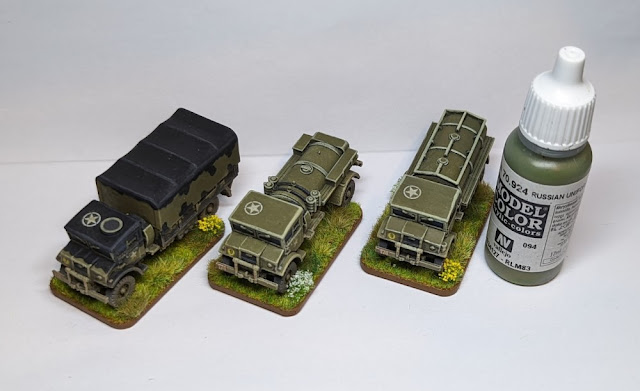 These are (from left to right) a CMP F60 Lorry, a CMP 60L Water Tanker, and a CMP 60L Petrol Tanker. Vallejo bottle for some scale.
When I saw that these models were available in resin print form, I knew I had to get some in order to represent the 'A' Echelon' troops of 144th battalion, Royal Armoured Corps. Each tank battalion was divided into three echelons, F, A and B.
'F' echelon represented the fighting element and vehicles of the unit, which would go into battle. 'A' echelon represented vehicles and men which were needed to look after the immediate needs of the battalion - providing rations, fuel, ammunition, cooking facilities, etc. 'B' echelon represented vehicles and men normally deployed further from the fighting and looking after long term stores, admin and repairs.
Often overlooked, the 'A' echelon troops often had an extremely dangerous and hard job, keeping the tanks supplied and traversing perilous roads, often at night in black out conditions which carrying dangerous cargos. The tanks may have been leaguered for the night at the forefront of the advance, miles beyond the previous front lines with very little in the way road security or protection offered to those brining forward supplies - possibly under fire. 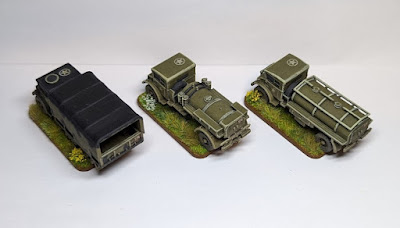 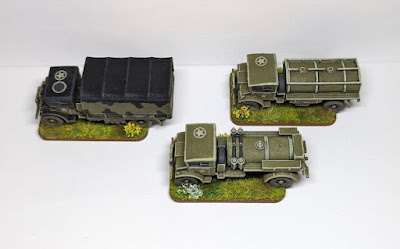 I added 'mickey mouse' style camo to the ammo lorry, just for some visual interest. It's a real bugger to paint, but I'm happy with how it came out. The models have the usual selection of decals, and are based in my standard fashion. I did place them a little back on the bases, however, in an effort to protect the front bumpers - these 3d prints are very brittle.
These models will see service on the games table as set dressing, objectives or some other specific mission. They have the markings of 33 Armoured Brigade and 144RAC. For the challenge, this entry netted me 24 points (towards my 250 point target...).