Another long gap between blog posts, mainly brought to you by a distinct lack of painting mojo on my behalf. I normally seem to suffer a bit of a slump post AHPC, but this year I struggled to shake the doldrums and was distracted by computer games and TV shows.

I did manage to assemble all of the Leopard 1 models for the TY dutch project...

Aside from building some tanks, I had slowly been chipping away at the infantry for my previously completed IFVs. These models are 15mm Battlefront metal casts, and were nice and easy to paint. No camo, limited range of colours and some nice poses. 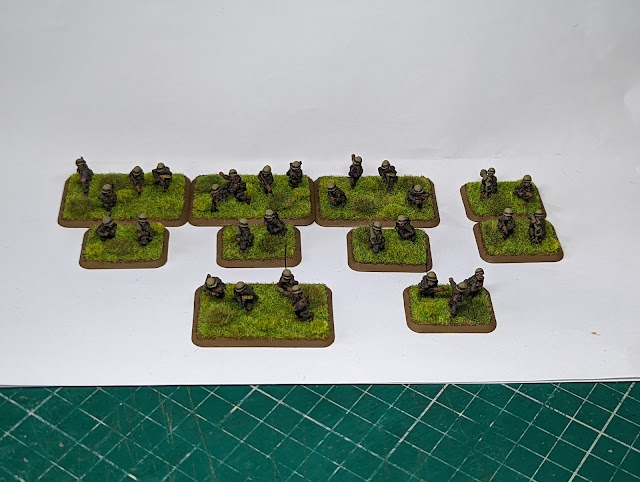 The pack contains enough models to also build the formation command team, and with two radio operators I was able to easily mark out which of the infantry teams would be the HQ.

In total there are four GPMG/LAW teams, three Carl Gustav teams and two Dragon ATGW teams. Then the formation commander on the small base. 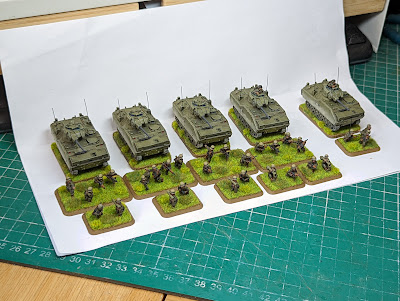 They look the part with their transports.
I've not gone for any flower tufts on the bases, mainly to separate these out from my WW2 stuff, but also as my perception of a cold war landscape is one with a lot less 'wildness' to it. I do have two shades of grass tufts, just for some texture and variation, although they don't show up well on my (poor) photos.

I'm unsure what's on the painting table next - possibly another vehicle unit just to make sure I can replicate the same look as the IFVs.