It's been a long, hot, summer here in the north of England. That, and a number of other factors which have included repeated illness, a major birthday and a general lack of painting mojo has led to a lack of progress.

I did take some time out to do some gaming, which I've still to post about. This included a decent sized ACW game at Pendraken's new show/gaming venue, along with attending their open day.

However, this last week I've knuckled under and managed to get my Leopard 1 contingent completed.

These nine tanks will provide a HQ and two platoons of four, or else three units of three.
They are Battlefront plastics, and were relatively easy to put together. I did have issues adding the bazooka skirts to them, which I eventually had to resolve by trimming some of the track detail around the front sprocket. I could see no other way to assemble these without massive gaps and I'm not sure if I was missing something obvious.
I've added Battlefront NATO tank commanders to three of them, added the appropriate machine gun to the turrets and my usual fishing line aerials. Decals on these are basic, as the Dutch don't seem to add many markings to their tanks. 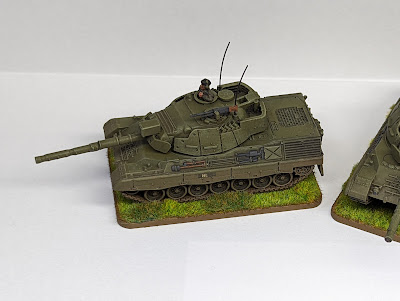 These are not quite the correct model for Dutch Leopards, as the Dutch added stowage bins along the side of the hull (where the tools are on this model). This in turn impacted on the placement of the 'NL' decal. However, I'm happy enough with them and have promised myself I'm not going crazy with this collection as I have my WW2 stuff.
Basing consists of 70mm by 45mm MDF, with the usual magnetic material underneath. I added two different tones of grass tufts, but otherwise my usual shade of green static grass.
Paint came from the same AK Interactive 'US Olive Drab' special set. I've now tried the '3g' primer and paints form AK Interactive and I am impressed. The primer especially is great. Needs thinking but gives a really nice durable coat. 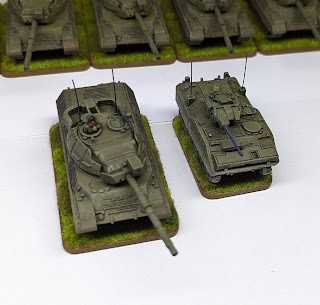 I was pleased that despite all the trial and error that went into the earlier APCs, the Leopards match in quite nicely. I could perhaps go a bit heavier on the lighter dust weathering, but that's an easy fix.
Added to the queue next, some more APCs! However, I did pick up a set of the Army Painter Speedpaints for my birthday. This was mainly as a way to paint my sci-fi models faster, and I'm currently using them to paint up my last units of knights for the Joshua Project. This is still a thing, and progress will be made on selling on the donated models for charity later this year (hopefully).