So perhaps slightly faster than I had expected, but I've finally finished my rebasing effort! I had expected this to take longer, but it seems I had built it up in my head to be a much more difficult task than it turned out to be. 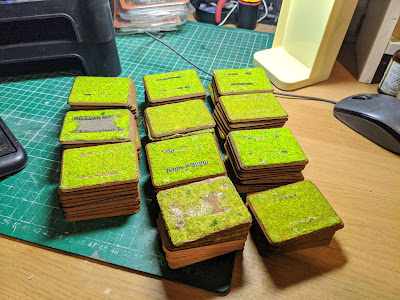 The final effort was to finish off a couple of odds and sods, such as my SBG Churchill. This has been put on a much smaller base (90mm by 40mm?) than it was previously, and hit with ultra matt varnish as well. I do have a deployed bridge and some spare fascine bundles to sort out as well, which I should add to the list of things to do: 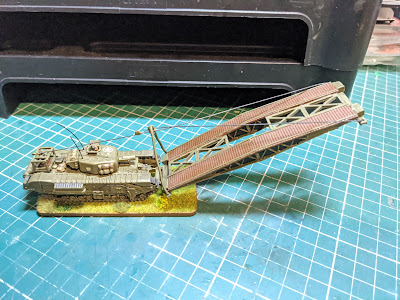 And then the final part, my C squadron of 144RAC. 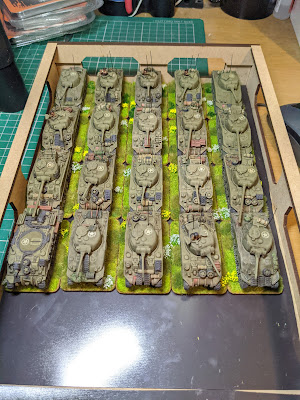 As mentioned previously, I had wanted to do some extra work on these guys. Turret number decals were replaced as required, hull squadron symbols added where needed and the whole unit was painted with my ultra matt varnish. Repairs were made if they were needed as well. Weathering was also applied to decals, as some hadn't been weathered before.

I also, as mentioned before, replaced the barrels on the firefly models: 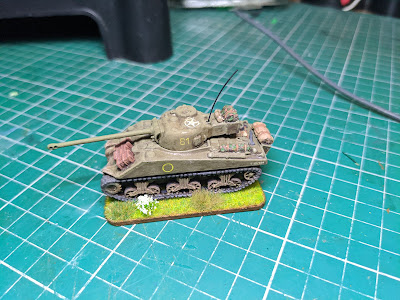 I am missing one type of tuft for some of this units bases, but the brand I've been using isn't available just now due to their webshop being closed. Hopefully that sorts itself out soon, but it's not a big job to fix once I have the product.

I have to say, the amount of satisfaction I got from finishing this particular unit was far greater than I was expecting. As far as my collection goes, these guys are very much the core of everything and as much as I had 'finished' them previously, there were still bits to do that bugged me. Now all the decals and basing is standardised, and the ultra matt varnish brought out the highlights, I am really pleased.

I'm not too sure what's next hobby wise. I do have a 10mm For Joshua army to base, so while I'm in the basing mood I should get on with that. I also have some Polish Stuarts and an ARV to do in order to completely finish another outstanding project. Young Alexander is now going to bed in the evenings rather than staying downstairs with me, which gives me a bit more hobby time.