As much for my own records as any other purpose, I normally like to post up what hobby relevant gifts I've been lucky enough to get for birthdays or Christmas. This years birthday was no exception, with Amy graciously purchasing off an extensive list I provided her (so I get something I want, and there is still an element of choice for her and surprise for me).

This year, I was especially delighted to find that I had some cool wrapping paper: 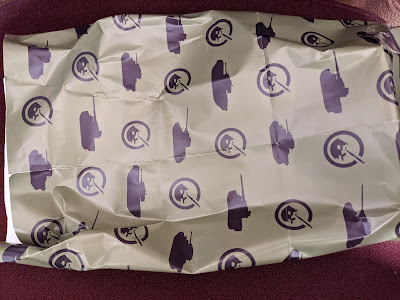 So first things first, I had to sit with Alexander (who has just turned 6 months old) and point out what all the silhouettes were. He was so interested, he tried to jam the paper in his mouth. I think he was aiming for a Sherman.

This paper contained a variety of goodies, all book based: 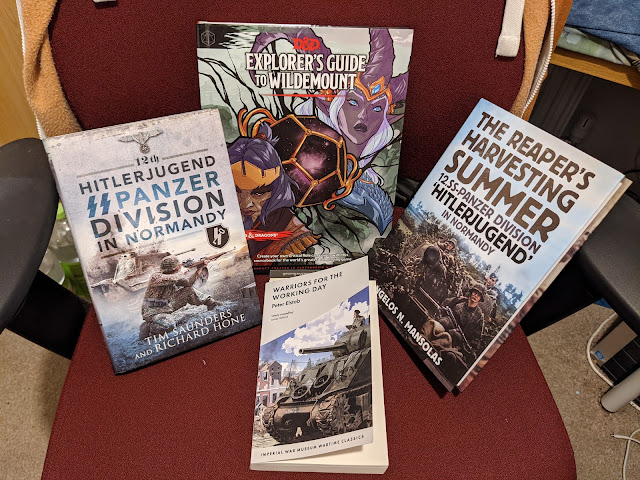 The DnD book I thought might be useful for my ongoing homebrew campaign, while at the same time I've watched all of Season 1 and 2 of Critical Role and the setting is interesting to me. I'll be pinching relevant bits as I need to.

The two books on 12th SS are interesting. I've still to dig into them fully, but from a brief flip through of the main sections I'm interested in (Operation Totalise), I'm already doubtful of the various authors findings in other areas. The easiest way to check for me is to turn to the section on the death of Wittmann and check what they say.

The Tim Saunders and Richard Hone book (12th Hitlerjugend SS Panzer Division in Normandy) does mention the presence of Canadian tanks form the Sherbrooks, who are described as all facing one way and not being in a position to engage Wittmann. The authors maintain that it was Elkins who landed the killing blow and proceed to ignore any evidence to the contrary, only selecting the statements which back their version of events. They even quote an unnamed German tanker saying that after he bailed out he saw the wake of the shot passing over the wheat and hitting Wittmann's tank, and that the shot came from the right. This despite them stating Wittmann's tank was the 2nd to be knocked out (and that it blew up immediately, which it did not), and failing to address which tank the unnamed crew member was from (in his Operation Totalize book he states it was a crew member of either Tiger 009 or 312, and fails to point out that by the authors own version of events these tanks were closer to Elkins and knocked out after Wittmann was, which makes either the witness not credible, or the author).

We are also expected to believe that in a large field covered in feet tall wheat, under artillery, MG and tank fire a German crew member, having just undergone the stress of bailing out of a knocked out tank, was standing (?) at a height where he could see Wittmann's tank and the top of the wheat 300 to 400 yards away over an undulating field.

No mention is made of the only documented damage to Wittmanns tank being on the left (not the right), or issues around the timing of the events compared to the various other witness statements. While the authors provide a map of specifically where Elkins was (handily putting him exactly 800 yards away from Wittmann) - this isn't actually known information. No firm position is known for Elkins firefly beyond that it was on the edge of the orchard. My belief based on other goings on at the time is that in the position they place him, he would have been visible to, and under fire from, multiple Panzer IV's and Jagdpanzers as well as the Tigers. As Elkins did not see any Panzer IV's during the engagement, we can assume this position is incorrect, and that it is likely his tank was further back towards the village where the orchard would have screened him from other German tanks. This in turn would have impacted which rear Tiger reached the 800 yards point first.

Similarly we are to believe that the Canadians - despite being a veteran unit who have moved into no-mans land on their own initiative (with no idea where other friendly units were), during a breakout deep into German lines and having repelled German counter attacks with armour earlier that morning from various directions, would not set up an all round defence. the authors statement that they had all their tanks covering the same arc of fire (and despite evidence to the contrary, such as there being fewer areas of damage to the surviving wall than tanks in the unit), appears to be nonsense and not in keeping with either tactics or common sense.

However the author is happy for us to consider without any doubt that the Brits, who were a veteran unit who moved into no-mans land on their own initiative (with no idea where other friendly units were), during a breakout deep into German lines and being aware of previous German counter attacks earlier that morning, would set up a sensible all round defence.

At least this book manages to get the vague position of the various units correct, and the sequence of events matches those found elsewhere, even if it appears that Tim Saunders is sticking to roughly the same poorly considered fairytale about Wittmanns death as he published in his Operation Totalize book.

Just to be clear, the story repeatedly told by Saunders and others is that Wittmanns tank was the second to be knocked out (out of 5, with Tiger 314 being destroyed first), that it blew up immediately and that a crew member in Tiger 009 or 312 who had bailed out after his tank was destroyed saw Tiger 007 being hit from the right and blowing up. Which is obviously contradictory and does not stand up to any sort of scrutiny. Tiger 007 could not be the second tank destroyed if a bailed out crew member in Tiger 009 or 312 saw it being hit and knocked out - as Tiger 009 or 312 would have been the second hit if the crew member was bailed out... No mention is ever made regarding the positioning of Ekins (when 100 yards difference in placement would change the order in which the Tigers would have been visible, and would change which tank was at 800 yards first, 007 or 314).

Also, both German sources and Canadian sources state that the turret blew off Tiger 007 some time after it was hit. Initially the Tiger was reported as being stopped with it's turret dislodged and facing to the right, and that some time later the turret blew off and somersaulted in the air landing next to the tank hull (while a German doctor was trying to get forward to check on the crew, and after one of the retreating German tank commanders had passed it on foot). The only account of any initial large explosion comes from Elkin's and the unnamed German crew member. The only damage to the hull of the Tiger is described as being on the left upper hull (from the direction of the Canadians), who were 300 yards away.

As someone who considers evidence on a professional basis, I can't help but see holes all over Saunders account, and it stinks a bit of national pride over actual evidence. While I don't believe we will even know who was responsible for the fatal shot, this level of picking and choosing information to display merely to back your own argument regardless of flaws is just rubbish.

However, credit where credit is due. Saunders and Hone's book does a good job compared to the Mansolas book (The Reapers Harvesting Summer). In it's chapter detailing the death of Wittmann and Operation Totalize, the author states that the Canadian infantry were in the village occupied by 154 Brigade of the Highland Division (specifically and utterly incorrectly listing the 1st Black Watch of Canada as being in Saint-Aignan-de-Cramenil) and makes no mention of the Highland Division at all.

This author then goes on to place the British 1st NY (Elkins unit) in the position of the Canadian Sherbrooks (around a chateaux with loopholes made in the walls for the tanks), but places the location of this chateaux on Wittmanns right (in the orchard), in the location actually occupied by the 1st NY...  and makes no reference to Canadian armour being present in Gaumesnil at all. To take anything else the author says in the book seriously without a massive amount of double checking would be pointless. May as well have spent money on a magic eight ball. It reads like the author has written from a half memory rather than using any sources. I would not recommend this book if this chapter represents the standard of historical accuracy elsewhere. Still, nice birthday present and I'll read it anyway.

The novel, Warriors for the Working Day by Peter Elstob is a IWM new edition of a book published in 1960. It's a fictionalised account of the authors wartime experience, and reads more like a novel than a memoir. Some interesting accounts of life and death inside a Sherman. The unit is described as being the 33rd Tanks, but is based on the authors fighting with 3RTR - as they convert to Comets later in the story. The main theme, I would say, are the mental changes and strains put on the tank crews, and especially the commanders, as the fighting goes on and they see the deaths of more and more comrades. Repeatedly there are characters who just can't take it any more, and constant battles not to show fear to others. Basically, everyone seems to think that they are the only ones who are scared. I finished this in a two days, and found it pretty interesting - a good insight into some of what by grandfather encountered and might have thought about.