On Sunday we had our long awaited WW2 mega game, our first since January 2020. Using our using mix of modified v4 Flames of War. More to follow soon, once I can get some sort of battle report done.

In the run up to this game, I've been feverishly painting extra bits and bobs. This included a couple of Churchill AVRE, using the Battlefront plastic kit. I did add some extra bits, in the form of S&S Models AVRE side fittings along with stowage from a number of different sources. 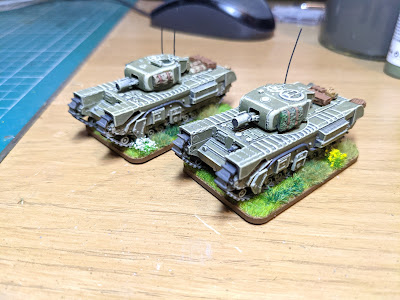 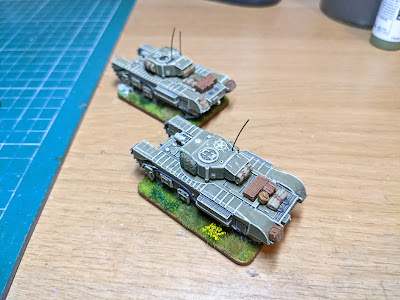 I had planned for one of these to mount an S&S Models fascine conversion kit, however I realised I had a spare PSC Churchill hull from a 2nd hand bulk buy a while back. More on that later. I had wanted another pair of AVREs in order to be able to put two 'breaching teams' on the table for the D-Day game, which worked out rather well.

The Battlefront models go together fairly easily. I felt detail was a bit lacking on the Petard, as it's just smooth. I felt drilling it out myself would have been risky. When putting the kits together I also had issued getting the top hull to sit snugly without adding some pressure till the glue dried. Something to look out for if you do any of these yourself.

The paint job, while rushed, stuck to my most recent method of base coating, washing, dry brush highlight, tidy up with the base colour and then do details. Two aerials for the command tank, which is also awaiting a crew figure to make it easy to pick out on the table.

I may do a post in the future showing all my engineering tanks off, and some size comparisons between BF metal and resin, Plastic and PSC Plastic tanks.